“We no longer think about what we’re going to do in Ramadan... We now think about what we are going to eat”... This statement, voiced by a Syrian in Latakia as part of a video report by a local newspaper, is a testament to the current state of the local markets during Ramadan. With this phrase and within the man’s tone as he said it, there is a sadness and helplessness that I feel in every corner of Damascus today.

Ever since the holy month that holds a special place for Syrians began, I spend several hours of the day walking the streets of Damascus, and I can’t help but sense the heavy weight that has settled on everyone’s chests. Before the hours of iftar (when Muslims break their fast at sundown), the local markets — especially the popular street markets, such as Bab Sarija, Bab al-Jabiya, al-Shaghour, Sheikh Mohi al-Din, and the al-Midan markets — are packed full of people. Everyone agrees that the prices of all the goods and commodities have, almost without exception, multiplied several times over since last Ramadan.

As I enter the Bab Srija market, I am met with warm smiles from some vendors and their street cries as they call out to sell their goods in a poetic and songlike manner that portray this month and what’s usually sold in it, especially a number of famous Damascene sweets, such as ‘al-naem’ (fried loaf buns drizzled with sweet molasses), and ‘Ma'arouk’ (a round baked dough usually stuffed with dates, sugar, or coconut).

Ever since the holy month that holds a special place for Syrians began, I spend several hours walking the streets of Damascus, and I can’t help but sense the heavy weight that has settled on everyone’s chest

“Three small buns of ‘al-naem’, the simplest possible type of sweets, cost 4,000 Syrian pounds (one US dollar),” Mutassem, one of the vendors, tells me as he skillfully turns a bun inside the large frying pan with two long wooden sticks. Next to him is his colleague who is busy decorating the buns with molasses using a large wooden fork. The two men mention how the difficulty of getting gas is one of the main reasons for the higher cost of ‘al-naem’. “We have not been able to sell well aside from the first day of Ramadan, as people want to begin the month feeling some of the festive mood, but now I can say that sales are less than half of what they had been last Ramadan,” he says.

Next to this cart are the juice sellers, selling all sorts of colorful drinks that must be present on any Ramadan table at the time of iftar — juices like tamarind, licorice, orange, and jallab among others. “A bag costs 5,000 Syrian pounds,” one of them tells me. Another sells it at a slightly lower price. 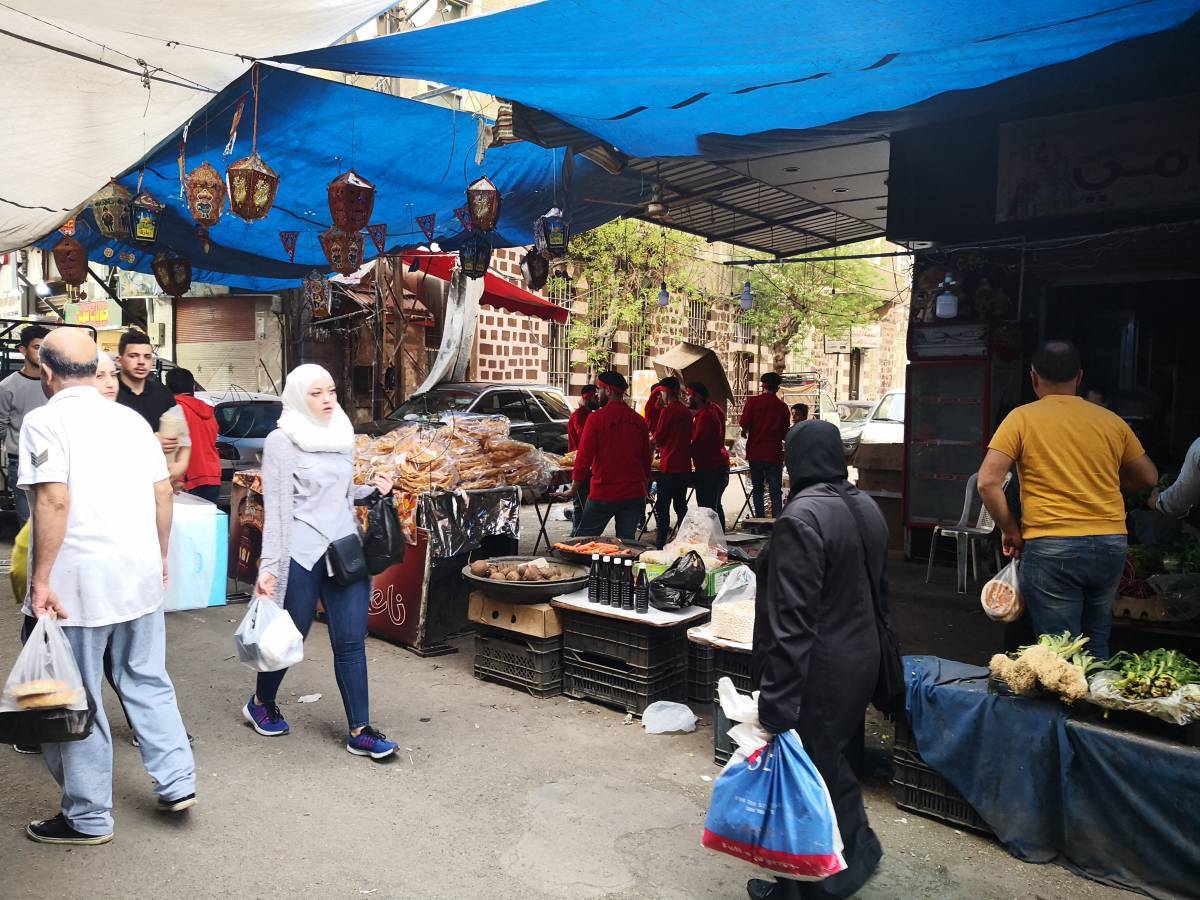 With a quick calculation, I verify that most families today cannot even begin to afford sweets and juice every day, not even every third day! Perhaps no more than once a week, especially with the minimum wage not exceeding 100,000 Syrian pounds (27 US dollars according to the current exchange rate in the parallel market).

A man in his forties stops next to the ‘al-naem’ seller, asks about the price of one bun, and continues on his way without buying any. He heads towards the nearby bakery that sells delicious  ‘Ma'arouk’ loaves. The smallest one, which is barely enough for one person, costs 2,500 Syrian pounds. I ask him if he is going to buy something, and he answers that he’d rather leave the small amount of money he earned today from his work loading goods in the nearby al-Buzuriyah Souk, for the more essential needs. Sweets are not as important as preparing at least one main dish on the iftar table, and any dish, no matter how simple, cannot cost less than 20 thousand pounds. “But I would like to make my children happy with some ‘naem’ buns. Maybe tomorrow,” he says before he continues on his way with a very hard look in his eyes.

Everyone in the market, sellers and buyers alike, can only talk about the unprecedented rise in prices. One local newspaper estimated the rate to have risen by nearly 40 percent since the beginning of the year. “Man, the war in Ukraine is killing us”. “I swear we cannot sell any cheaper than this… It just won’t do”. “What can I tell you, my daughter, the old Ramadan was of a different time, it was ‘kareem’ (kind and generous), and people used to empathize for one another. Nowadays no one is able to empathize with anyone.” 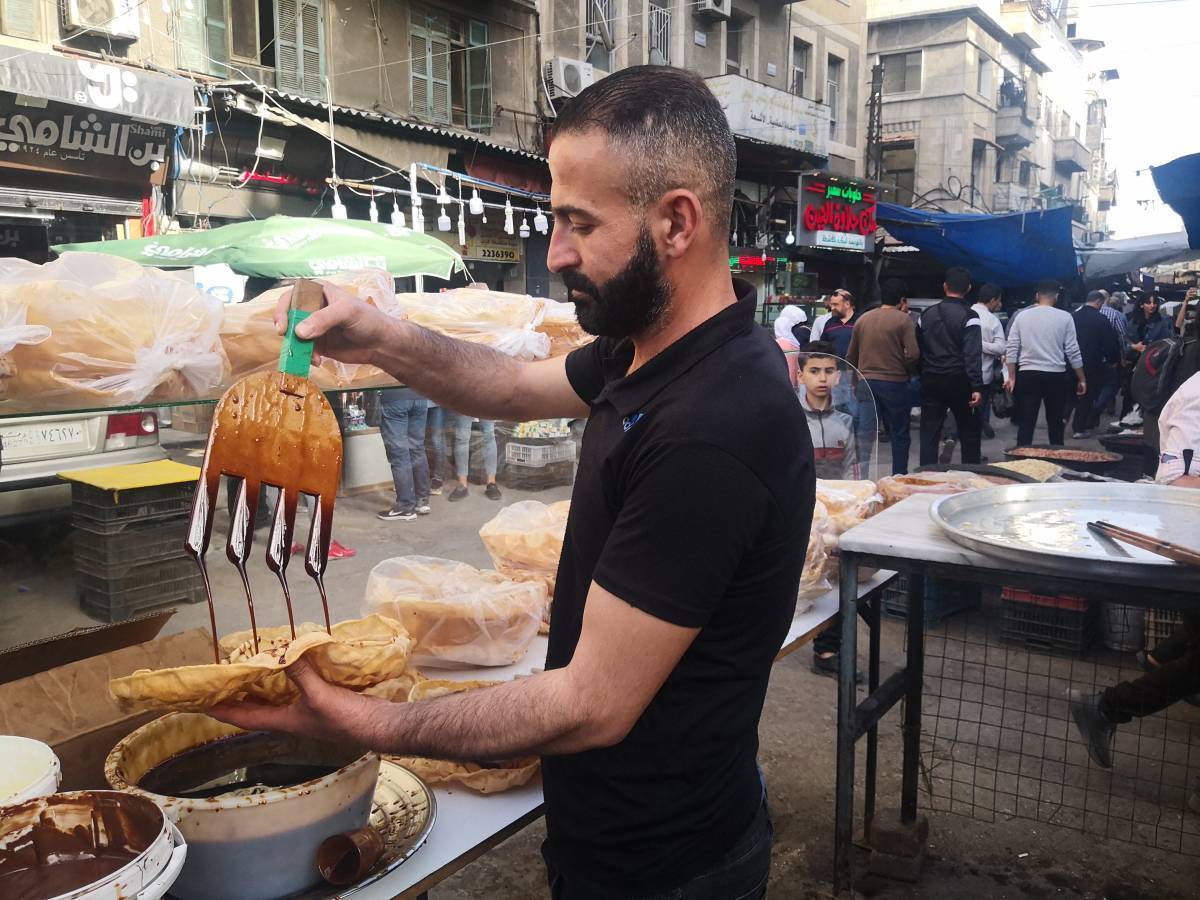 In Jazmatiya Street in the al-Midan neighborhood — where famous Damascene sweets such as ‘Qatayef’, ‘Awama’, ‘Warbat’, ‘sha'ibiyyat’, and others, are sold by many street vendors who work in this area in particular — the scene from afar looks like a festival of colors and geometric shapes. The sweet sellers excel in tastefully arranging the pieces of sweets, on the principle that “the eye eats before the mouth”. They call out, trying to attract passers-by, most of whom are content with a passing glance, while a few stop to ask about the prices of some items. Most of the shops are almost empty of customers.

“Believe me, this is the first time in my life I am unable to cook a main dish for the Ramadan dining table. Yesterday we only ate beans with oil. Oh how I fear the end of the month and Eid, I don’t know how we’ll feel any joy then”

“The prices of most types of sweets, especially those stuffed with ashta (cream), range between 25,000 and 35,000 Syrian pounds per kilo ($6 to $9). As for Arab sweets that are made with margarine and pistachios, the average price per kilogram is 80,000 pounds. They are double the prices compared to last Ramadan,” says one of the sellers, pointing out that most people, if they buy at all, are content with a quarter or half a kilo, and sometimes even just a small plate that doesn’t cost them more than two or three thousand.

“Arabic sweets and desserts are a key ingredient on the Ramadan dining table, but it is no longer served daily, and many families will only taste it once or twice this year,” he laments. I notice a car parked next to the shop. In it, a man, a woman, and a little girl stay there for a long time just looking at the storefront and the sweets put on display. They then continue on their way in silence. 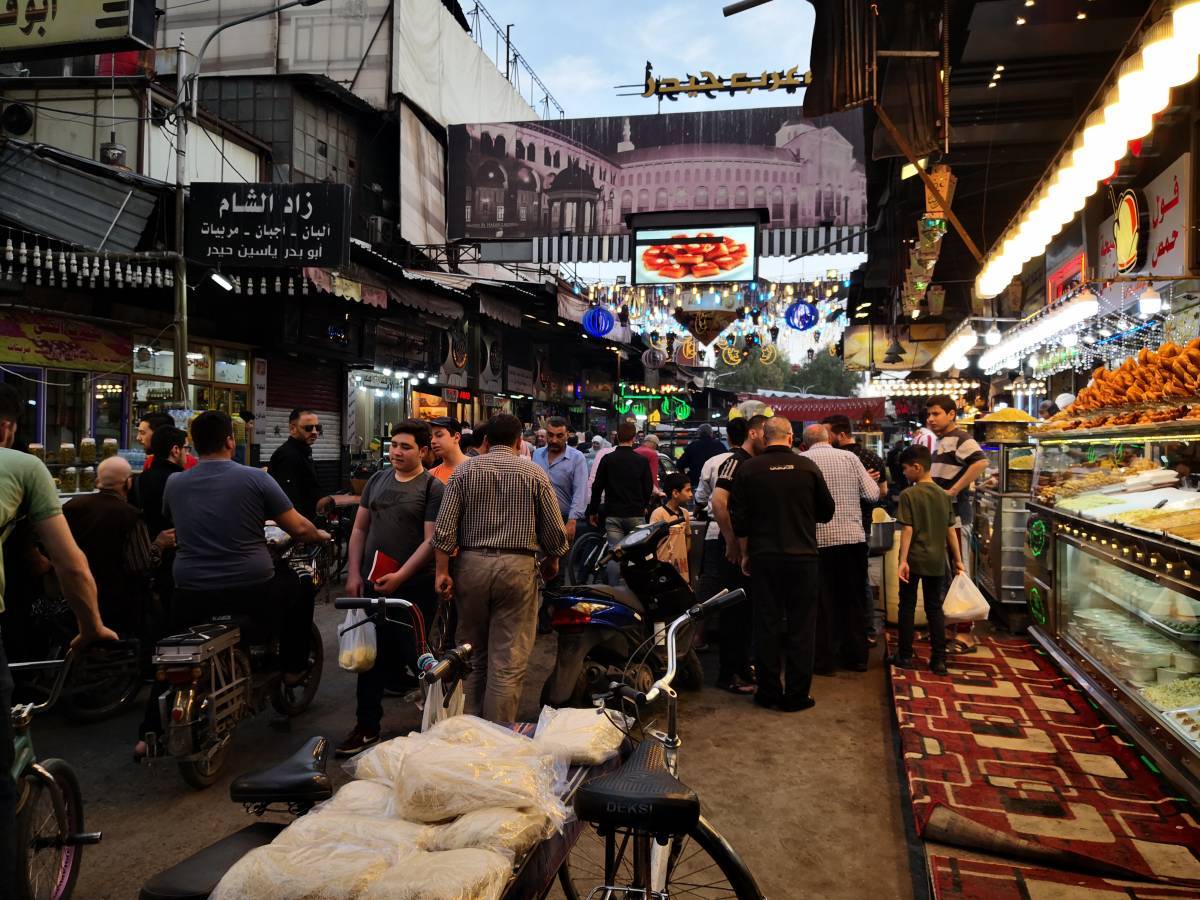 I head to the shop that sells ‘Ma'arouk’ at the end of the street market, thinking it must be more crowded than the rest. Indeed, I find six or seven people standing in front, as they order one or two pieces of the smaller sized ones. I ask a woman what she had chosen, and she says, “The one on coconut and raisins. My children love it.” She has three children. I do not know if a small piece no more than ten centimeters in diameter would be enough for them.

“Believe me, this is the first time in my life I am unable to cook a main dish on a daily basis for the Ramadan dining table,” she tells me with tears in her eyes. “Yesterday we only ate beans with oil. How could this be? Oh how I fear the end of the month and Eid. I don’t know how we will be able to feel any joy then.” I too, am looking for joy and cannot find it. The Ramadan this year in Damascus, is a very sad one.