On the coast of the Shatt al-Arab river in Iraq's southernmost province of Basra, Mohammad al-Sudani sits on a wooden bench, looking out on his land. In his hands are the prayer beads he inherited from his father, along with the palm grove that his family has owned for more than 200 years.

“Our land was full of palm trees," he tells Raseef22. "We’d go out from early dawn until the sun sets, in an effort to take care of them, certain we will harvest the fruits of this labor at the time of harvest, and ease our burdens, for the dates will be sold in markets or factories, and the government may even buy them from us and export them abroad. But things changed after 2003, and the lush green trees became empty and barren.”

Mohammad had inherited 40 dunams from his father after he died, 30 dunams of which are occupied by palm trees, while the rest were allocated to seasonal fruits and vegetables, but the area his land is in has declined significantly over the past years as a result of drought and the difficulty of providing the necessities to maintain it. It kept declining until the total of his cultivated land became only 5 dunams, two dunams of which are for palm trees, adding to his worries, since there are no markets to buy and no government attention to keep him safe from tomorrow’s hunger.

“Our lands were full of palm trees, but things changed after 2003, and the lush green trees became empty and barren”

Iraq has been known for its date palms since ancient times, and its civilizations glorified and hailed it as a blessed tree, attaching great importance to its cultivation, and making its areas expand, which made it acquire the title of “the land of Sawad” (which means “black land”) because its lands were filled with palms and crops. The Iraqi Museum in Baghdad contains evidence of this interest, in a seal dating back to the Akkadian period in 2,730 BC, depicting the painting of two men with a fruitful palm tree standing between them.

The sanctity surrounding the palm tree was also referred to by the "Hammurabi stele", as it included laws regulating how to cultivate it and the means of caring for it, and set a fine of 225 grams of silver for cutting down a single palm tree in Article 58. It also included, in its 65th article, the payment of the rent of an entire orchard if the palm trees are neglected and the production of its dates declines. It is said that the Abbasid caliph, Harun al-Rashid, would always say that all the gold and silver on earth is not worth the price of Basra's palm trees. 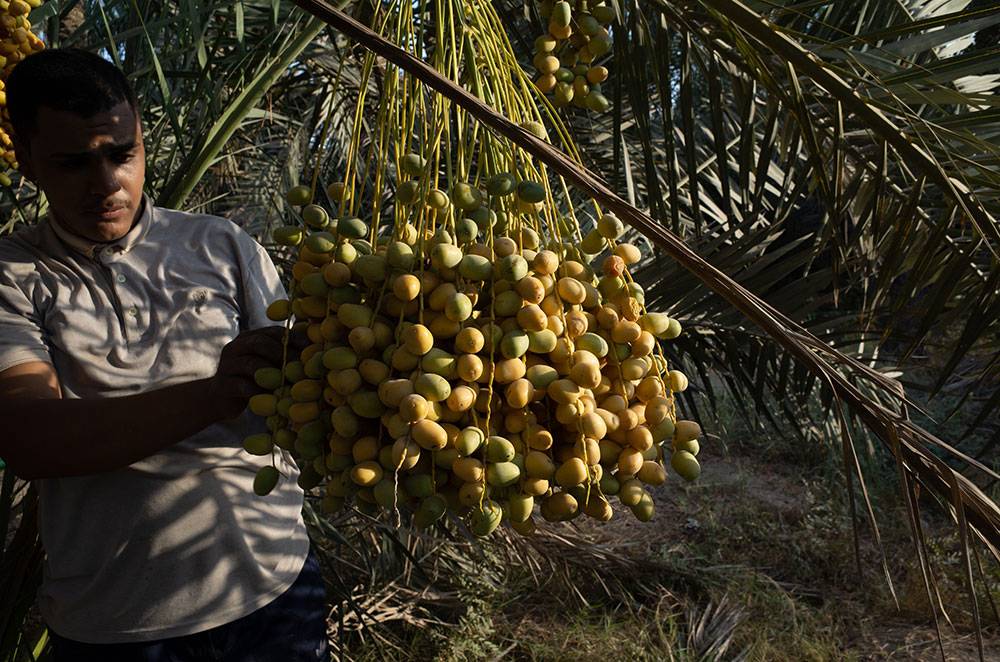 Dubbed by many as the national symbol of Iraq, palm trees were mainly cultivated in 13 governorates in the center and south of the country, and previous governments gave it importance due to its impact on the local economy and the gross national product of the state. They had passed several laws to motivate the development and care of this type of agriculture. For example, the dissolved Revolutionary Command Council (RCC) issued a law in 1979 stipulating that the state's agricultural lands be granted to their tenant if he was able to plant them with fifty fruit-bearing trees, including date palms, in one dunam.

Such care has led Iraq to top the list of countries producing dates, and its varieties diversified into more than 600 types, some of which are rare and are now hardly produced. Previous government statistics indicate that from 2000 to 2003, Iraq produced more than 800,000 tons of dates annually, yielded by about 33 million palm trees.

This reality changed after 2003, and the rates of date production decreased in addition to the decline in the areas planted with palm trees. Government statistics indicate that the number of palm trees fell back to 12 million palms, and their production declined to reach about 450,000 tons annually between 2005 and 2009.

Mohammad inherited 40 dunams from his father, with 30 dunams occupied by palm trees and 10 with seasonal crops, but the area declined greatly over the past years due to drought, to become only 5 dunams of cultivated land, two of which are for palm trees

The Iraqi government announced in press statements that palm cultivation increased during the year 2022 to reach 17 million palm trees, and their date production rates exceeded the barrier of 700,000 tons in 2020. However conflicting statements regarding the numbers and percentages of palm production prompted an official source in the Ministry of Agriculture to describe them as "inaccurate". He states, "These statistics contradict the agricultural reality that we are seeing, as well as the periodic reports of the field teams, which confirm the continued decline in cultivated areas in general, and those of palm trees in particular, with this decline reaching a rate of more than 60% relative to its area before 2003.”

While speaking to Raseef22, he adds that political reasons stand behind the manipulation of these statistics, including them among other attempts to delude public opinion that the Iraqi economy does not depend on oil revenues only. He bases this opinion of his on the timing of the statements, which were made at the height of the global economic crisis associated with the Covid pandemic in 2020, and the decline in oil prices.

Such government manipulation is not just limited to announced numbers, but also includes great negligence that affected the palm-growing sector in the country. This led to a decline in the percentage of cultivated land due to the state's lack of seriousness in addressing the crisis of weak water imports, which caused a steady increase in land salinity, and a decline in the cultivation of many types of palm trees.

The failure to provide the agricultural sector with research requirements and studies focused on the protection of palm trees is one of the facets of the state's neglect of this aspect, in addition to the deterioration of the rates of financial support for farmers and the owners of agricultural lands, and the imposition of large taxes on fertilizers and pesticides, a measure that led to a significant increase in their prices, and consequently the decline of agriculture and the number of workers in it at the same time. It also led to many selling their lands or converting them into residential lands, right under the watchful gaze of the competent authorities.

The importance of palm trees

Demands to give importance to date palm trees are increasing day by day, and these demands do not stem from a vacuum or the like. The material impact that this tree may have on the country's deteriorating economy prompts focus on these demands.

Iraq currently has about 20 million dunams of land suitable for cultivation, but most of these lands are neglected and need to be reclaimed

Date palm cultivation may provide an important financial return, but the magnitude of this revenue is related to the return of production rates to the 30% threshold, while its current rate does not exceed 6% of the Iraqi national product, according to Sabah al-Saadoun, a researcher specialized in agricultural economics.

In his statement to Raseef22, he points out that Iraq has about 627 varieties of dates, including more than 50 commercial types, which are among the most sought-after and in demand types globally. The country possesses a huge diversity compared to the varieties grown by other date-producing countries in the region. Some of these varieties include Khastawi, Halawi, Zuhdi, and Barhi dates, and some of these species are able to withstand drought, salinity, and frost, in addition to being fast-growing, and therefore can achieve quick and guaranteed economic returns, if properly taken care of.

These benefits are not limited to the financial output that results from selling and exporting them, but also contribute to eliminating unemployment, not only for workers in their field, but as a result of their entry into many local industries such as wood, decorations, and mats, in addition to pressing and packaging them, or their entry into the industries of liquid sugar, molasses, vinegar, or feed.

Environmentally, palm trees have a great agricultural benefit, as these trees are the ideal cover to protect fruit trees from heat in the central and southern regions of the country, in addition to their role in fertilizing and stabilizing the soil, thus deterring the desertification crisis and repelling the dust storms that have recently increased.

Iraq currently has about 20 million dunams of land suitable for cultivation, but most of these lands are neglected and need to be reclaimed, and therefore solutions are still possible at the moment.

The first step in the solution lies in the return of government support to the agricultural sector, according to al-Saadoun, starting with reducing the prices of fertilizers and pesticides, and issuing soft loans based on a plan and conditions depending on the commitment of farmers to invest and care for their land.

The benefits of palm cultivation are not limited to financial output, but also contribute to eliminating unemployment, not only for workers, but as a result of its entry into local industries such as wood, decorations, liquid sugar, molasses, and vinegar

The application of modern irrigation methods is also one of the most prominent solutions currently offered, given the continuous decline in water levels in the country, and therefore the adoption of tissue culture methods and drip irrigation are two of the most successful methods in such circumstances, but all this needs studies and research that Iraq currently lacks.

"All these solutions have already been proposed through agricultural associations, but government officials have ignored them, sowing despair instead of palm trees," says Omar Khaled, a palm tree farmer in Kirkuk Governorate.

Khaled confirms to Raseef22 that he had previously hired a lawyer to convert the 70-dunam land he owns with his brothers in order to sell it as residential land. He says this move is like sticking a knife in his heart, "This move was not a choice, it was a challenge, in this land, between life or death, from starvation.”

No one denies the existence of governmental attempts to reclaim the palm-growing sector, but the contradictions of these continuous attempts make it difficult to convince farmers to hold on to their land, or discourage them from abandoning it. For now, in Iraq, a land once known as the "country of 30 million palm trees", it is clear that the future of palm trees is far from promising, as is the case for the future of the entire country.

Artificial rain in Iraq: Impact on human life and biodiversity

Diyala faces drought alone... A weak Iraq at the mercy of Iran

Raseef22’s holistic approach to tackle issues that matter ensures a continued, wide and diverse coverage of topics related to local, regional, and international environments. Its time to aid our environment.. so take the lead!

At a time when the environment is undergoing rapid and unprecedented change, we aim to challenge and address the conflicts and consequences of these changes. We want to raise awareness where and when we can. Its time for you to participate and take action!