Just days ahead of the International Day of Happiness on March 20th, the United Nations has released its 2022 World Happiness Report to mark the day, with an analysis of the effects that the Covid pandemic have had on people’s quality of life between 2019 and 2021.

The brunt of the pandemic, coupled with a number of crises and other unfavorable factors, have had a great impact on the happiness of the citizens of the Arab region, especially Lebanon, which is going through the worst economic crisis in its modern history. In the report, the Mediterranean country ranked at the bottom of the list of Arab countries and the second-lowest amongst the least happy nations in the world after Afghanistan.

It is worth mentioning that four Arab countries were listed among the 50 happiest countries: Bahrain, the United Arab Emirates, Saudi Arabia, and Kuwait.

Happiness around the world

The United Nations report included 146 countries, and the level of happiness was determined by several indicators, most notably the average life expectancy of the population, GDP per capita, the prevalence of corruption, public trust, and generosity within society.

Lebanon is at the bottom of the ranking, while Egypt and Tunisia lag behind Iraq and Libya... Four Arab countries are among the top 50 countries in the World Happiness Report 2022. What’s your country’s ranking?

For the fifth year in row, Finland grabbed the top spot in the ranking, having the happiest population in the world. Its Scandinavian neighbors Denmark, Iceland, Sweden, and Norway soon followed. Germany, Canada, the United States, and the United Kingdom ranked from the spots of 14 to 17, respectively.

Meanwhile, the country ranked as the most unhappy nation in the world is Afghanistan, where the hardline Taliban movement took power last year.

Happiness in the Arab region

In the Arab world, Bahrain topped the list of the happiest countries, ranking number 21 globally. It was followed by the UAE and Saudi Arabia in the 24th and 25th spots, respectively.

Despite their ongoing political decline and security and economic issues, Libya and Iraq achieved two relatively advanced positions, the 86th and the 107th, respectively. Whereas Tunisia and Egypt rank somewhat behind, at 120 and 129, respectively. 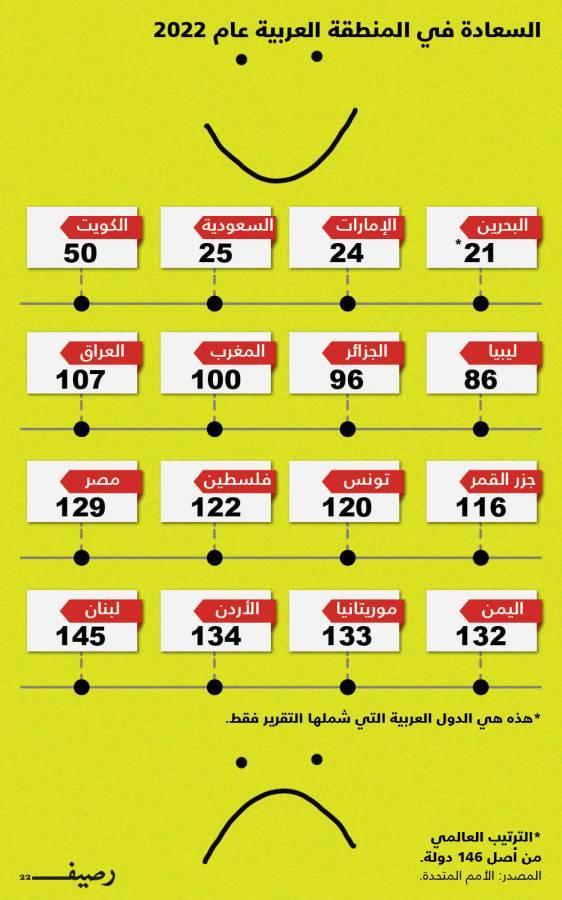 Yemen, Mauritania, Jordan, and Lebanon were at the bottom of the Arab ranking in terms of happiness, taking the 132, 133, 134 and 145 slots, respectively.

Out of 146 countries... 18 Arab countries figured in the World Happiness Report 2022, four in the lead and four among the most unhappy. Find what your country’s ranking is.

The United Nations has been observing the International Day of Happiness since 2013, in recognition of the relevance of happiness and well-being in the lives of people in every part of the world. The recent adoption of the 17 Sustainable Development Goals (SDGs) — which aim to end poverty, reduce inequality, and protect the planet — by the United Nations comes within a framework of efforts to achieve prosperity, well-being, and happiness for nations.

The United Nations General Assembly proclaimed March 20 as the International Day of Happiness, in UN resolution A/RES/66/281 of 12 July 2012.

The adoption of the decision came as a result of an initiative by Bhutan, a country that has recognized the supremacy of national happiness over national wealth and income since the early 1970s, and adopted the Gross National Happiness index, favoring it over the Gross Domestic Product.

Who Else is Afraid of Happiness?

What is happiness to a young Arab?

Gaza’s rules of happiness in the times of Hamas