The history of the Europe’s royal families is teeming with stories of a princess who ran away with her lover, whether he was a guard, a waiter, or an officer in the army. But we almost never hear such exciting tales in our Arab world, and if we do hear about them, they are usually modern day stories that took place during times of progress, openness, liberation and ease of travel - not in Baghdad in the thirties, as what had happened with Princess Azza, daughter of King Faisal I, the founder of the modern state of Iraq.

At the time, not many people spoke of her story, out of respect for her father and grandfather, Sharif Hussein bin Abdullah, King of Hejaz and leader of the Great Arab Revolt against the Ottoman Empire.

What is to follow is a chapter in Iraq’s history that many wished would remain forgotten.

Princess Azza was born in Istanbul in 1905, as the eldest child of King Faisal, who then had been a prince living in a palace overlooking the Bosphorus. Faisal entered the Ottoman Parliament (the Chamber of Deputies) as a representative of the city of Jeddah, before joining the ranks of the Great Arab Revolt spearheaded by his father in 1916, leaving Azza in the care of her mother Sharifa Huzaima bint Nasser, and her Circassian grandmother Bazmijihan, Faisal’s mother. Her aunt, Princess Musbah, was married to Prince Abdullah bin Al Hussein, brother of Faisal and founder of the Kingdom of Jordan.

Not many spoke of Princess Azza, daughter of King Faisal, and her story of eloping with her lover, out of respect for her father and grandfather, Sharif Hussein bin Abdullah, King of Hejaz and leader of the Great Arab Revolt against the Ottomans

Between Mecca, Damascus and Istanbul

Sharif Faisal was an admirer of the West, given the development and sophistication he saw in all its big cities. He tried to teach his children the European ways of life from a young age. He asked his friend British writer Gertrude Bell to teach them the etiquette of the royal families of London and how to play the piano. He also brought a Damascene teacher named Safwat al-Awa to teach them arithmetic, mathematics and Islamic history.

Faisal spent all the years of the Great Arab Revolt (1916-1918) away from his children, as they lived in Mecca with the women of the family. At the end of 1918, he brought them to Damascus after it was liberated from Ottoman rule and he was pledged allegiance to as an Arab ruler over Syria. Princess Azza was thirteen years old when she arrived in Damascus along with the women of the family, only to be forced to leave after her father was deposed on July 24, 1920. 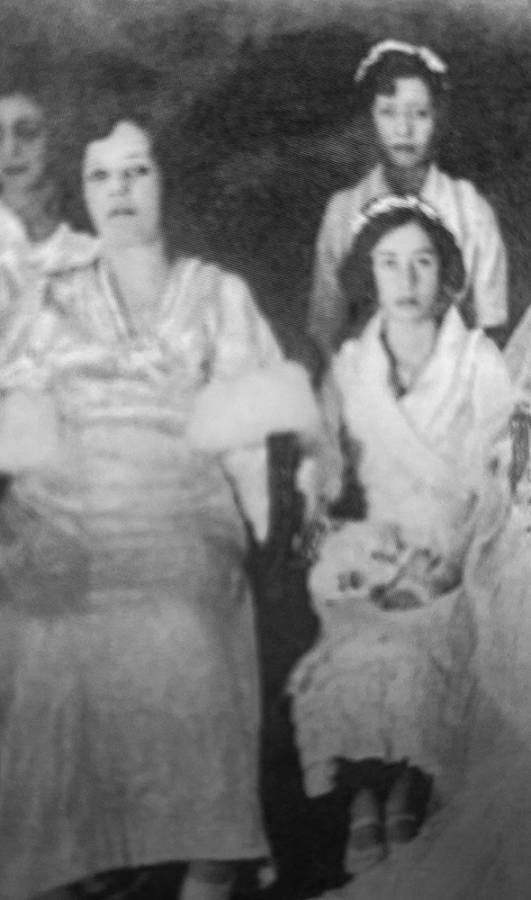 Azza was taken to Mecca again, before she settled with her mother in Baghdad in 1924, three years after Faisal was crowned King of Iraq. She lived under the care of her father up until his death in 1933 in a Swiss hospital. She had not been the favorite daughter of King Faisal, who used to direct all his affections towards her younger sister, Princess Rafi’a, who had been left completely paralyzed after she was accidentally dropped by a maid when she was still a baby. This preferential treatment may have been one of the main reasons for the resentment that Azza had towards her family.

Azza ran away and left a letter written in English, explaining she decided to split from the royal family to marry the person she loves, because her family would never accept a Christian husband that works as a waiter

Following her father’s death, her brother King Ghazi I assumed the throne of Iraq. He used to take her with him on his summer vacations to Greece, where she met an Italian waiter named Anastas (some sources say that he is Greek). Azza fell in love with the young man and they became romantically involved, secretly communicating with him through hidden letters, away from the critical eyes of the royal family of Iraq.

In 1936, Azza pretended to be sick, constantly coughing and spitting out fake blood onto the ground (which turned out to be red tonic). The palace doctors examined her and said that she needed to have some rest, so King Ghazi ordered that she travel to the island of Rhodes with her sister and three maids to serve and watch over her. 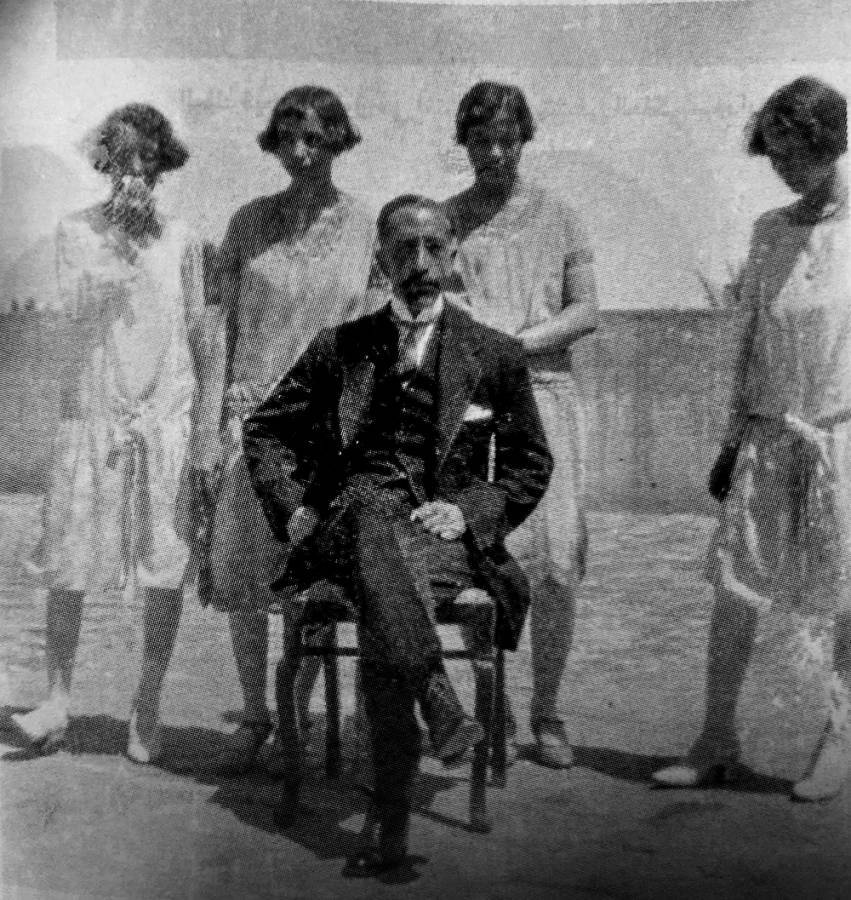 From Rhodes, Azza headed for the city of Athens, where her lover Anastas was waiting. They tied the knot in the Atlantic Hotel after Azza renounced the religion of Islam and converted to the orthodox Christian faith. She change her name to “Anastasia” after her husband “Anastas” and the Grand Duchess Anastasia of Imperial Russia, the youngest daughter of Tsar Nicholas II, who was said to have survived the Romanov family massacre in Moscow and was living in Europe.

Princess Azza suffered from poverty and deprivation during her marriage,  her husband seized her money and jewelry. He was a simple, uneducated man, unqualified for jobs that would guarantee them a decent life

Azza left a letter for her sister that she had written in English, telling her that she had decided to split from the royal family in order to marry the person she loves, because her brother and mother would never accept a Christian husband that works as a cafe waiter. Her sister rushed to the Atlantic Hotel and asked to meet “Princess Azza bint Faisal”, but the hotel clerk said that there was no guest there under that name. Upon review, it turned out that she had checked into the hotel under her new name, “Anastasia”.

Years of Loss and Homelessness

The royal palace in Baghdad went into uproar upon hearing the news of the princess’s escape. A royal decree was issued to cast her out from the Hashemite family, and to withdraw all her titles and the allowances she had been receiving from her brother King Ghazi. Azza, or “Anastasia”, continued to live in Greece after getting the Italian citizenship from her husband, but she suffered greatly from poverty and deprivation, after her husband seized her money and jewelry and sold them at the lowest prices in order to make ends meet. He was a simple, uneducated man, unqualified for jobs that would guarantee him and his small family a decent income.

He traveled with Azza to the island of Cyprus in search of work, and when he did not succeed, he ended up in London, where he decided to separate from Azza in 1939, a few months before the start of World War II.

After that, Azza went back to Rome, alone and poor, where she lived under the supervision of Benito Mussolini’s intelligence, and where she was allocated a monthly stipend from the Italian government during the years 1940-1944. With the retreat of Nazi and fascist forces in the war, her stipend was cut off, and Azza had to live as a beggar on the streets, appealing for the sympathy and compassion of the Arab citizens residing in Rome who gave her charity out of pity and respect for her father and grandfather.

Meanwhile in Iraq, newspapers were forbidden from publishing news of the runaway princess, and no one dared mention her name within the council of King Ghazi (who died in 1939) or his son, King Faisal II. In 1945, she learned that her cousin Prince  'Abd al-Ilah - the regent of the throne of Iraq and the son of King Ali (the eldest son of Sharif Hussein) - was planning to visit London to meet then Prime Minister Winston Churchill. Azza then went to London and stood before him in her tattered clothes, weeping and lamenting the misfortunes that had befallen her. She asked him for amnesty and forgiveness, and 'Abd al-Ilah, feeling sorry for her, offered to have her live in Jerusalem and to allocate a monthly sum of money for her to live from, on the condition that she would not tell anyone her real name. Of course, she was in no position but to accept.

In her memoirs published in London in 2002, Princess Badiya, daughter of King Ali, says: “I am ashamed to even mention Azza... what she did was a disgrace, not only against the royal house of my uncle, but also against us as nobles”

Azza traveled to Jerusalem, where she witnessed the 1948 war that led to the annexation of the city to the Kingdom of Jordan following the occupation of Palestine. She did not approach her uncle King Abdullah or her aunt Queen Musbah. However one day by chance, she ran into her cousin Prince Nayef, who recognized her immediately. Azza asked him to mediate with King Abdullah to agree to receive her in his palace in Amman, and said that she regretted what she had done and wanted to return to the Hashemite family.

King Abdullah accepted and invited her to live in Amman, but away from the royal family. After him, King Hussein. who assumed the throne of Jordan in 1952, sympathized and took pity on her. He honored her and restored all of her removed rights since 1936. We do not know much of her position on the al-Rehab Palace massacre that killed all the members of the ruling family in Iraq in 1958, the killing of King Faisal II, or the gruesome death of her cousin Prince 'Abd al-Ilah, whose body was mutilated and dragged through the streets of Baghdad.

When she was diagnosed with cancer, King Hussein sent her to London for treatment, and she later died in one of the hospitals of the British capital in 1960. Her body was taken back to Jordan to be buried within the royal family burial grounds. Yet many princes and royal members of the family did not forgive her. In her memoirs published in London in 2002, Princess Badiya, the daughter of King Ali, says: “I am ashamed to even mention her name...because what Azza did was shameful and a disgrace, not only against the royal house of my uncle, but also against us as nobles”.

The photos in the article are taken from the book, ‘The Heiress to the Thrones’ by Princess Badiya bint King Ali, London 2002.