A few days ago, a picture spread through social media showing a Jewish man casting his vote at the polls for Iran’s presidential elections. This scene may seem unfamiliar to many because of the stereotyped image of Iran, but it reflects a realistic paradox and distinction in the Islamic Republic.

The regime that classifies itself as the most hostile to Israel is the very same one that embraces and holds the largest Jewish community in the Middle East. According to some figures, nearly 20,000 Jews live in Iran, while other findings number them at about 9,000, there are more than 76 synagogues in Iran today.

So how do Iranian Jews live under the rule of the Islamic Republic?

Radical Transformations with the Khomeini Revolution

Up until the Islamic Revolution, about 100,000 Jews lived in Iran, a large percentage of whom were businessmen and ‘bazaar’ men, namely merchants. After Ayatollah Khomeini came to power, the incident that saw the execution of Habib Elghanian represented a milestone in the history of Jewish contemporary presence in Iran. 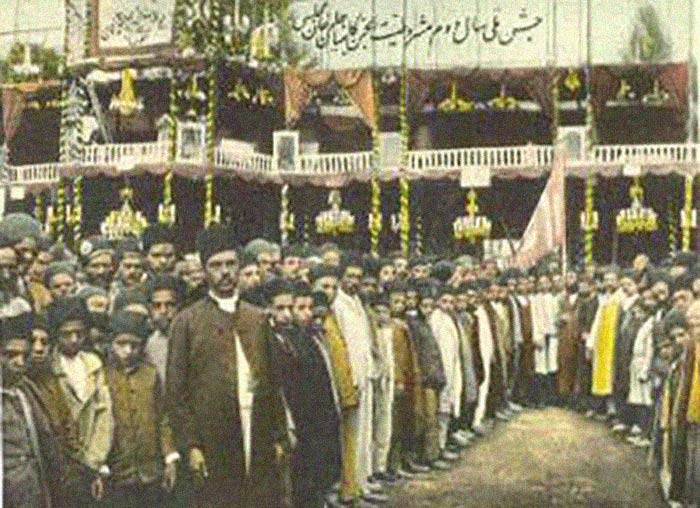 Elghanian was considered the leader of the Jewish minority, and was one of the biggest Jewish merchants that contributed to building the Iranian economy during the Shah’s reign. He was the first to introduce the plastics industry into the country, becoming the owner of the massive ‘Plasco’ factory in Tehran. He also had joint projects between Iran and Israel — something that wasn’t prohibited during the reign of the Shah.

After Khomeini came to power, the incident that saw the execution of Habib Elghanian, the leader of the Jewish minority, represented a milestone in the history of Jewish contemporary presence in Iran

Elghanian was executed on May 9, after he was accused of working (espionage) for Israel and Zionist organizations. This incident came as a shock to the Iranian people as a whole and to the Jews in particular. It raised numerous fears among Iranian Jews, especially as it took place in light of the massive mobilization against Israel and heightening internal tensions, which over time caused the emigration of more than 60,000 Iranian Jews outside the country.

A large part of these emigrated to Israel, which had been offering a reward of up to ten thousand dollars per person and 61 thousand dollars for each Iranian Jewish family, in a bid to encourage them to immigrate.

Currently, the number of Jews of Iranian origin in Israel is estimated at more than 200,000, those of which include former Israeli President Moshe Katsav and former Defense Minister Shaul Mofaz.

In the face of growing fear following the Islamic revolution, Iranian Jews decided that meeting with Khomeini was necessary to settle matters once and for all. An article by Roya Hakakian — an Iranian researcher of Jewish origins living in USA — revealed the details of a meeting that brought an assembly of Jews (two rabbis and four young intellectuals sympathetic to the cause of the Islamic Revolution) together with Khomeini in the city of Qom on May 10, 1979. The aim of this meeting was to discuss how to protect thousands of Jews, and it was the reason for Khomeini issuing his famous fatwa to mandate the protection of Jews inside Iran and prevent any attacks against them.

Khomeini told his guests: “In the holy Quran, Moses, peace be upon him and all his companions, has been mentioned more than any other prophet. Prophet Moses was a mere shepherd when he stood up to the might of pharaoh and destroyed him. Moses, the Speaker-to-Allah, represented pharaoh’s slaves, the downtrodden, the mostazafeen of his time.” (mostazafeen; the celebrated term referring to the enslaved Israelites)

Following this meeting, the phrase “We recognize our Jews as separate from those godless Zionists! —Imam Khomeini” was written on the doors of every synagogue, Hebrew school, and kosher butcheries by nightfall.

The History of Jews in Iran

The historical narrative says that the Jewish presence in Iran dates back to the sixth century B.C., to the time of their exile by the Assyrians to Mesopotamia. They were called the Tayalisah Jews (or “hood-wearers”), in reference to the white shawls they would wear on their heads. 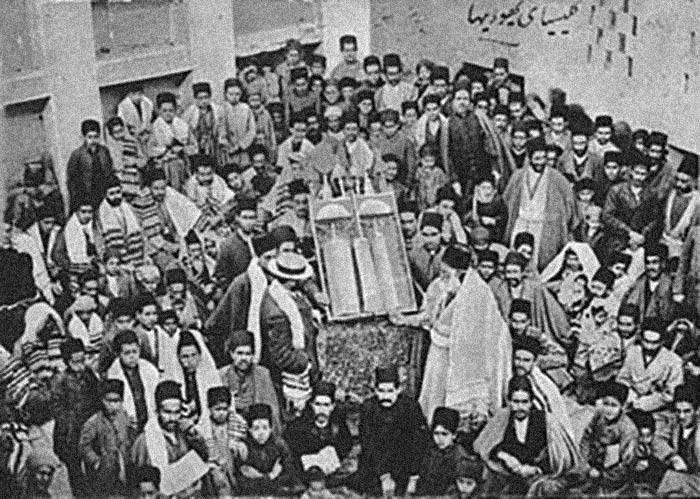 During their time in Persia, they had a close relationship with King Cyrus who allowed them to return to Jerusalem.

The Hebrew narrative exalts the importance of Esther, a religious Jewish heroine who persuaded King Ahasuerus of Persia to thwart the plot of his chief minister Haman, who had been intending to get rid of all Jews. She was able, with her beauty and intelligence, to persuade the king to crucify Haman.

Other accounts say that King Cyrus had no reason to punish the Jews, as they had a friendly relationship with the Persians and worked as advisors and assistants for them, also spying for them in Egypt after they were sent to Jerusalem. Accounts also indicate that they helped the Persians in occupying Iraq at that time, and therefore the Jews consider the period of their presence in Persia as an ancient golden age.

There are shrines, temples, and tombs of great importance to the Jews in Iran, including: the Tomb of Prophet Daniel, as well as the Tomb of Benjamin — the brother of Prophet Joseph (Youssef) — in addition to the tombs of Esther, her uncle Mordecai, and Prophet Habakkuk.

Iranian Jews are free to practice their religion, as there are about 76 synagogues in Iran, with 31 in Tehran alone — of which only 23 are active — and 13 in Shiraz and the rest in other cities. The reason for the closing down of many synagogues is due to the large wave of immigration during the revolution.

In a speech to the United Nations General Assembly in 2017, former Iranian President Hassan Rouhani said, “We are the same people who rescued the Jews from Babylonian servitude”

The Iranian government provides support to their places of worship, allowing them to save 10% of their annual expenses. It also does not require them to pay taxes or any fees for water services, electricity services, or gas services. It also allows Jews to purchase alcoholic beverages, even though it is prohibited throughout the Republic. They also have their own butchers and grocers that sell kosher products.

Nahid Pirnazar, a lecturer on Iranian Jewish History and Judeo-Persian Literature at the University of California (UCLA), explains the behavior of the Islamic Republic with the Jewish community with the principle of “practice your religion and reject Zionism”. With this, Iran wants to say that it allows the presence and activity of Jews as long as they take a stance against Israel.

Before the revolution, the political tendencies of the Jews in Iran were with the liberal anti-communist and anti-Islamic parties, and a few of them joined the communist ‘Tudeh Party of Iran’, but their political activity was very limited. 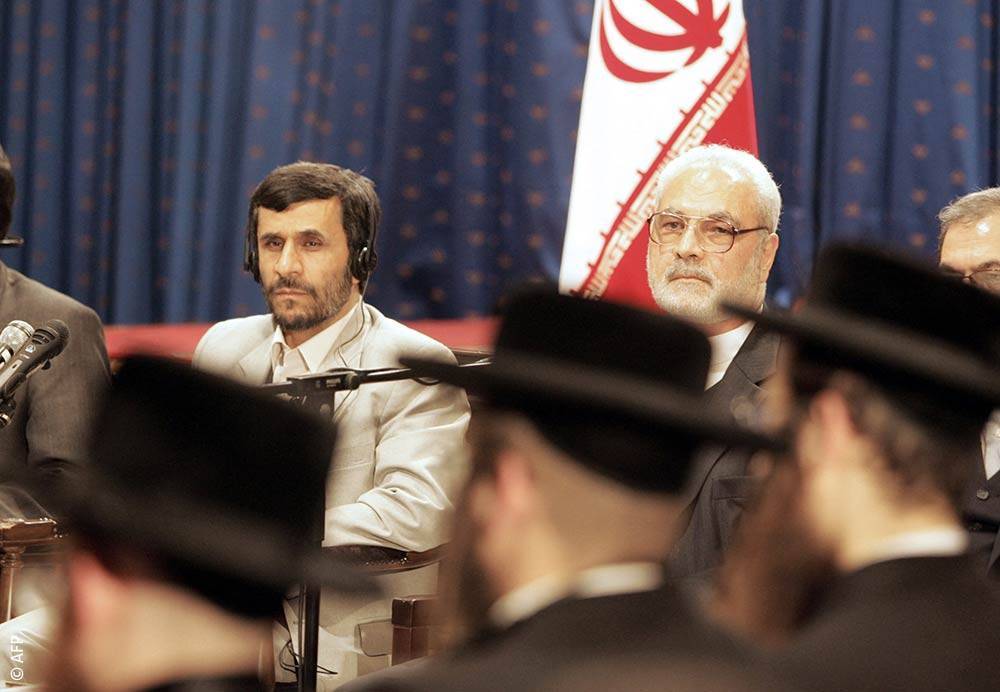 With the onset of the revolution, it was joined by Aziz Daneshrad and Parviz Haroun Yashayaei (Yesha’ya), two of the most prominent Jewish political figures. Accordingly, Daneshrad was appointed as the first representative of the Jewish community in the Assembly of the Constitutional Experts — the Legislative Council that drafted the country’s Islamic constitution during the revolution.

The Jewish minority in Iran was recognized as one of three religious minorities, along with Christianity and Zoroastrianism. Jews possess all political and civil rights, and also exercise their right to vote in various electoral centers that are designated for all Iranians.

But due to the circumstances, Jews practice their public activities with caution. In an old and clear reference to the Jews’ conformity with Iranian foreign policy, representatives of the Jewish minority met after the revolution with the representative of the Palestine Liberation Organization (PLO) in Tehran, Hani al-Hassan, and expressed their support for the Palestinian struggle, also expressing their reservations regarding Israel and Zionism.

In addition, the statements of the Jewish community are always against Israeli policies. For example, after the commander of the Quds Force in the Islamic Revolutionary Guard Corps Qasem Soleimani was assassinated, the chief rabbi of the Jewish community in Iran, Yehuda Garami, said during an interview with Al-Monitor that “the Zionist entity does not represent Jews.” He added, “We are always emphasizing that we do not like getting involved in all the disputes, wars, and politics between the two countries. It is a debate between politicians and has nothing to do with religion.”

The head of the Tehran Jewish Committee, Homayoun Sameyah Najafabadi, also condemned the recent Israeli attacks on the Gaza Strip, Jerusalem, and the West Bank.

Currently, Jews in Iran are distributed between the cities of Shiraz, Yazd, Kerman, Isfahan and Rafsanjan, but their presence is largely concentrated in the capital Tehran. Additionally, the majority of them are self-employed and are members of both the middle class and the rich class in Iranian society.

Jews in Iran have five religious schools, five restaurants operating according to Kosher law, and a charitable hospital with 250 employees, most of whom are Muslims.

This charitable hospital is one of only four charitable hospitals for Jews around the world. It is located south of Tehran and depends mainly on donations made by Jews from Iran or abroad. Muslims, including former Iranian President Mahmoud Ahmadinejad, have also made donations to it on several occasions.

Under the government of former President Hassan Rouhani, the Tehran municipality in 2015 erected a monument as a tribute to the Jewish soldiers who were killed during the Iran-Iraq war, on the basis of their status as an inherent component of Iranian society.

In a speech to the United Nations General Assembly in 2017, Rouhani said, “We are the same people who rescued the Jews from Babylonian servitude... I represent the same Iran that has historically assisted the oppressed: centuries ago, we supported the rights of the Jewish people and today we insist on the restoration of the rights of the Palestinian people.”

The Quran Will Not Keep Iran From Starving

Moroccan Jews on the Abraham Accords... What Is Their Future?