In February, Raseef22 broke the scandal of CAIR-Florida leader Hassan Shibly’s sexual harassment and polygamy allegations. A few weeks later National Public Radio picked up the story, adding explosive new details about Shibly’s behavior and how CAIR’s national leadership tried to cover up the scandal. The NPR story sparked turmoil inside CAIR, with some local leaders demanding a formal investigation and some former CAIR staffers demanding the resignation of CAIR’s co-founder and Executive Director Nihad Awad.

Roiled by the bad press and growing anger, CAIR’s leadership did not directly address the story NPR covered nor take any substantive action to address community demands for a formal investigation. Instead, CAIR responded by suing someone not even named in the NPR story: their own former board member and National Chapter Development Director, Lori Soraya. CAIR filed the lawsuit in federal court alleging defamation by citing some of Soraya’s Facebook posts. In a blistering response to CAIR’s lashing out, Soraya’s court filing rejected CAIR’s claims –  and revealed more issues inside the organization.

Soraya’s filing turns the table on CAIR, connecting its Executive Director Nihad Awad directly to a series of scandals inside the organization. In fact, Soraya alleges that Awad himself sexually harassed her – and that several other CAIR chapter leaders have engaged in abusive behavior. The filing indicates that Soraya tried to raise the alarm about Hassan Shibly’s behavior as head of CAIR-Florida several years ago, yet was silenced by Awad.

Soraya’s filing documents discrimination and unethical behavior inside CAIR, offering a glimpse into a toxic organizational culture. Emails indicate that a Christian woman was fired as head of a CAIR chapter because the national leadership objected to a non-Muslim in such a position. The filing also suggests discrimination against Shi’a staffers and antisemitic material posted to CAIR’s internal communications without consequence. One of the filing’s exhibits reveals a tense internal standoff between CAIR-New York’s leadership and CAIR National’s lead attorney over unethical legal practices while seeking media attention. Included is a warning letter from the two top leaders in CAIR-New York furious that CAIR National’s general counsel took actions that violated legal standards and endangered lawsuits against the Trump Administration’s Muslim travel ban. These failings had apparently been driven by CAIR’s desire to puff up its own profile, but instead its case (Sarsour versus Trump) threatened to derail the coordinated nationwide effort to block the ban (which is what happened). The New York staff threatened to report the CAIR leader’s conduct to the New York Bar Association, alleging that failing to do might cause them to lose their own licenses to practice law.

The filing also offers a rare glimpse into the legal arsenal CAIR uses to silence internal dissent. One of the filing’s exhibits is a redacted copy of the non-disclosure agreement (NDA) CAIR tried to compel Soraya to sign. This intense legal pressure perhaps explains another revelation in the filing: that there is a private Facebook group of 30 former female CAIR staffers who suffered from abuse and gender discrimination yet are too afraid to speak publicly because of NDAs they were compelled to sign. The filing points out that CAIR spends an enormous amount of donor dollars and legal counsel effort to suppress any internal criticism from seeing the light of day.

The court filing against CAIR, America’s largest Muslim civil liberties and advocacy organization, is a red flag all Muslim Americans should be aware of. Zakat rules exclude trading in the name of Islam by self-serving leaders.

These and other serious allegations reveal that beneath CAIR’s veneer of civil rights advocacy defending Muslims is an organization in perpetual crisis, led by a founding Executive Director ruling the organization for a quarter century like a Middle Eastern dictator. In a twist, Nihad Awad is now the real defendant in this case.

With an annual salary sometimes exceeding a quarter of a million dollars, Awad has profited more than anyone else from the existence of CAIR, consolidating power within the organization with no real oversight or accountability. Board members come and go (including former chair Parvez Ahmed, whose criticism of CAIR was cited in the NPR report), yet Awad and his deputy Cary “Ibrahim” Hooper stay. Awad answers to no one and, like the classic Arab dictator, tolerates no dissident. Nor can he ever seem to admit a mistake. And if Soraya’s filing is correct, he uses his position to hit on female subordinates.

Wrapping himself in the halo of being a religious defender of Islam, Awad claims to be protecting American Muslims and Islam from bigots. Yet despite CAIR touting itself as the premier Muslim civil rights organization in America, on Awad’s watch, Islamophobia has only worsened. Whatever Awad has been doing to address the problem has possibly failed – even as Awad prospered financially and received accolades with certain American elites, including leading members of Congress and a prestigious award from Harvard University.

Awad’s financial success has in part stemmed from his regular appearances on major Arabic (and Iranian) TV news stations, branding himself to Middle Eastern audiences as the premier guardian of Islam in America. A CAIR IRS filing from 2007 reveals how lucrative that marketing effort proved: CAIR’s five largest donors that year came from either Saudi Arabia or the UAE for a whopping total of over $1.2 million. 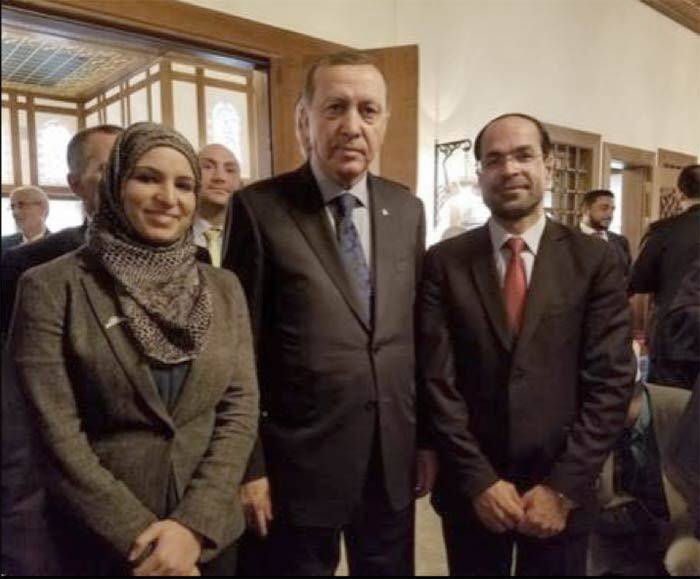 Many of Awad’s Gulf patrons have since turned on him, with the UAE even designating CAIR as a terrorist organization in a remarkable about-face (the UAE Embassy in Washington used to provide substantial gifts to CAIR). But Awad is a classic opportunist, quickly jumping on the Erdogan bandwagon – meeting with the Turkish strongman during the UN General Assembly and at the opening of a major Turkish mosque in Maryland. The switch mirrored his earlier evolution from hardcore George W. Bush backer to a new incarnation as a fervent social justice warrior supporting Women’s March. 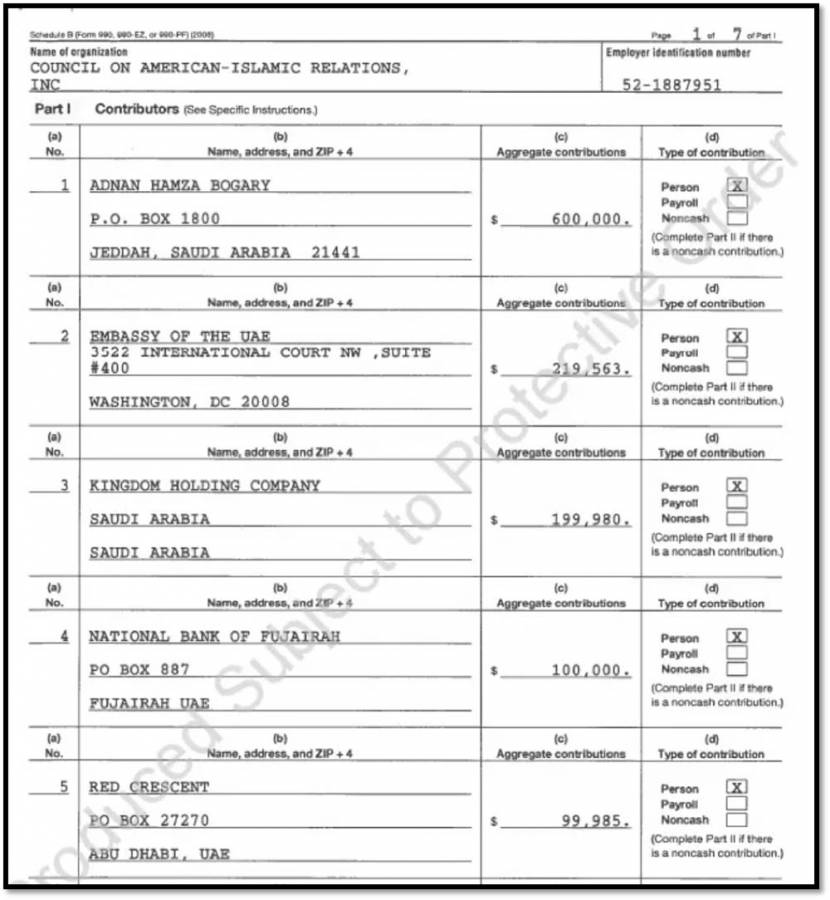 Beneath the façade of righteous advocacy, Awad seems to be just another self-serving politician. This explains how CAIR, the supposed civil rights pioneer, has actually become a civil rights violator, abusing its own staff and harshly cracking down on dissent within its own community at the expense of countering Islamophobes.

Soraya’s court filing documents unethical behavior inside the Council on American-Islamic Relations, offering a glimpse into a toxic culture. A must read for Muslim Americans who immigrated because of corruption and self-serving leaders hiding behind Islam

But the Soraya filing – along with a recent civil suit filed in California against CAIR – suggest that a new generation of American-born Muslim activists won’t be so easily silenced. A few years ago, young staffers in CAIR’s national office tried to unionize to have collective bargaining power. But in a bizarre twist for a civil rights organization, CAIR quashed the effort via costly litigation ($100,000 according to some former CAIR employees). To make its case, CAIR suddenly claimed not be a civil right group but a religious organization, whose religious freedoms would be curtailed by having employees form a union. The claim was a sign that Awad’s attempt to have it both ways was beginning to run into roadblocks.

Back when he co-founded CAIR in 1994, Awad was a visionary who realized the old-guard Ikhwan politics was a dead-end in American society. He had the foresight to pivot from overt Muslim Brotherhood propaganda to adopt an American civil rights activist persona – while many of his less agile colleagues who failed to evolve ended up deported or jailed (like former CAIR director Abdulrahman al-Amoudi).

A new generation of American Muslims, however, took Awad’s civil rights pose seriously. Committed religious feminists like Soraya bought into CAIR’s mission, which is indeed much needed for a minority community facing bigotry. After Soraya worked earnestly to establish her own local CAIR chapter in Minneapolis, she joined CAIR National and discovered that the organization’s leaders had betrayed the mission for their own political power and personal benefit.

The generational clash was bound to happen. Awad’s immigrant generation cannot fully shed the old-country mentality (some of Awad’s emails in Soraya’s legal filing also indicate his English remains not fully fluent) – nor can it truly comprehend the new American-born generation of Muslims who are rapidly transforming the community from within. Awad is a relic of the past, and his act has grown stale. He is long overdue to step down, yet he seems to be the last one to realize his time is up as he clings to power at all costs and lashes out at internal critics.

The rot inside CAIR exposed by Soraya is representative of the rot inside so many Muslim community institutions. Her personal disillusionment – from CAIR chapter founder to national board member to whistleblower – mirrors what many of her peers experience. They are lured in by a noble mission only to discover the venal reality of what happens inside. They join to help inspiring Muslim activists protect a community under siege, only to instead watch some of these same leaders repeatedly deceive young women into sham marriages for their own gratification.

There are surely many people in CAIR’s ranks who are truly committed to the organization’s mission, often because they have experienced discrimination firsthand. But CAIR’s rotten leadership is not a  protector for Muslim Americans, leaving most grassroots activists inside CAIR paralyzed in the face of the recent revelations by NPR and Soraya. The lasting damage is that many Muslim Americans no longer believe that the prominent Muslim activists who claim to speak in their name are trustworthy or legitimate. And there is also the growing phenomenon of American Muslims leaving the religion in disgust over the behavior of community “leaders”.

To put it more personally: Would you feel comfortable with your daughter working at CAIR?