Hassan Shibly, CAIR Florida’s Executive Director and a Syrian-American, appears the model of an orthodox observant Muslim man: pious with an impressive beard, Hajj delegation leader, a young dynamic orator on Islamic affairs, and civil rights advocate defending the rights of his people. Yet, Shibly’s wife recently took to YouTube to issue a desperate plea to help to leave what she alleges is an abusive marriage. As the ensuing scandal lit up social media, community members stepped forward on Facebook further claiming that Shibly has long engaged in womanizing and polygamy, entering into temporary religious marriages with women. Others claim that CAIR’s national leadership has been aware of Shibly’s behavior yet failed to act – part of a culture of impunity for powerful men in American Muslim organizations.

On December 28 2020, Imane Sadrati posted a video on Gofundme to raise money to support herself and her children after deciding to leave an abusive marriage with CAIR-Florida executive director Hassan Shibly. “I got married at a very young age, when I was 9 months pregnant with my firstborn; my marriage became volatile and abusive.” She did not specify the nature of the abuse, because she had been advised by her lawyer “not to go into details as this matter is being handled in court”.

The next day, Shibly wrote a long post on Facebook on December 29, 2020 claiming he and Sidrati have been separated for two years. He initially admitted to being abusive in the past (later scrubbing this from the post) and otherwise denied his wife’s charges to instead accuse her of marital abuse and being driven by financial gain. Shibly did admit to religiously marrying another woman, even though his divorce from Sadrati had not been finalized under US law.

Raseef22 enquiries to CAIR went unanswered. Moreover, no answer was received from the otherwise very present Linda Sarsour, a known Muslim American feminist. When will Muslim Americans realise they're not well served by their so-called representatives?

The scandal has not yet been picked up by the mainstream media, but caused a firestorm on social media among American Muslims. Over $25,000 was quickly raised for Sidrati on GoFundMe.com and Facebook users began posting allegations about other dishonorable conduct by Shibly, including misogyny and polygamy via nikah marriages, others have also claimed that CAIR’s national leadership has long known about these scandals and done nothing.

The scandal comes after a former CAIR national board member publicly accused the group of withholding pay as retribution to silence her and revealed the existence of a group of over 30 female ex staffers who say they were subjected to sexual harassment and discrimination.

Raseef22 reached out to CAIR to enquire about the matter, to confirm rumors of Shibly’s resignation and enquire about the accusations, but had not received a response as of the time of publishing this story. Moreover, Raseef22 reached out to Linda Sarsour twice for comment, both as a “feminist” and a known Muslim American activist, but she did not reply on the matter.

The users in the Facebook group FITNA (Feminist Islamic Troublemakers of North America Group) also drew attention to how quickly famous male “Scholars” rush to the defense of their own and encourage a culture of silence on abuses that many Muslim American women around their circles are all too familiar with. The same people had come to the defense of Tariq Ramadan after allegations of rape surfaced back in 2018 in France. Their calls for remaining calm and listening to both sides amounts to a dismissal of women’s voice.

Raseef22 reached out to FITNA in relation to this specific allegation, they confirmed: “... In this case, as in many others, Muslim women speaking up against abuse in the community are seen as ‘airing dirty laundry’ & possibly giving fodder to Islamophobes. FITNA’s advocacy in this case has already been quoted by Islamophobic media & we have issued a statement condemning this misuse of our calls for gender justice for Islamophobic attacks against CAIR & Hassan Shibly. We stand firmly with abuse survivors in their pursuit of justice & we pray for the wider Muslim community to join us in rooting out abuse from the community”.

Aman Ali, a media personality, supported Sidrati’s allegations against Shilby and claimed that that he personally knows multiple females who had been approached for “secret marriages”. 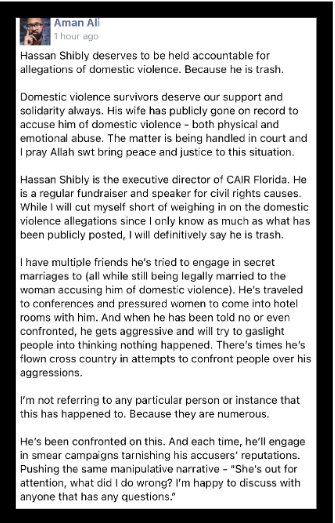 Ali had at least one of his Facebook posts suppressed most likely after it was reported to Facebook. Several other commentators saw their posts reported and suppressed, in addition to hostile comments indicating a targeting campaign to silence critics. Ali revealed that ever since his original post, he had received “a handful of messages and phone calls yesterday from accusers and several folks with firsthand knowledge of this abuse. It’s a lot more widespread than I ever imagined.” He added: “In the past few days he[Shibly] ’s made multiple aggressive calls to women that have posted about him and even their families and has dished out cease and desist letters in his continued efforts to thwart anyone bringing to light his behind closed doors behaviors.”

On Twitter, Amel Ahmed was clearly vocal when asking if CAIR was aware of Shibly’s behaviour and taking on “secret wives”. When asked by Raseef22 as to why CAIR’s leadership is silent on such critical matters, she said: You have a public figure with a history of abuse allegations from several women, and zero response (as far as i know, not sure if they've put out anything recently as I've been swamped with work) from an organization that purports to stand for human rights. Are women included in that vision? Why is it so taboo to call out men who transgress in our communities? Our community can help end this by first and foremost looking at how our own immediate spaces contribute to the silencing and suppression of women's voices. In the short term, it guides us to do some self-reflection and question why in 2021, many of us still have a tribal mentality when it comes to protecting powerful Muslim men even when they abuse that authority. I think our community is used to always being on the defensive here in the West, and we worry that holding our leaders accountable will harm us as a group. For me it's a no-brainer, my religion will now allow me to remain silent when these sisters are crying out for help. At the very least, tell us you HEAR these women and are looking into the allegations. To pretend they don't exist sends a louder message about how the men who run this organization view Muslim women.

Amel Ahmed reflects the view of many Muslim Americans today effectively she is suggesting the leadership in Muslim societies must abide by Islam and US Law and should not cover up for its members, especially not its leaders. Will this case start a purge of abusive civil society and political leaders using Islam and positions in Muslim Institutions to advance their personal lives under the guise of Islam?

The Quran says “there is no compulsion in religion.” So why are Muslim societies obsessed with atheism and apostasy?

Clitoris Excised, Labia Mutilated and Hijab Imposed: The Life of a Muslim Girl