The crisis of King Hussein’s children has ended quickly, right after Prince Hamzah announced his complete submission to his older brother, King Abdullah II. Anyone who reads up on the history of the Hashemite family (also known as the House of Hashim) knows that any disagreement between its members is always dealt with in a lightning fast manner, so that it may remain confined to family rooms behind closed doors — even if it had slightly raised its head and come out into the open as we just witnessed in Amman on the weekend.

We will stop at some of these stages in Jordan’s modern history to find a common denominator in the way the situation was handled — with the exception of the case of Princess Azza bint Faisal more than eight decades ago. 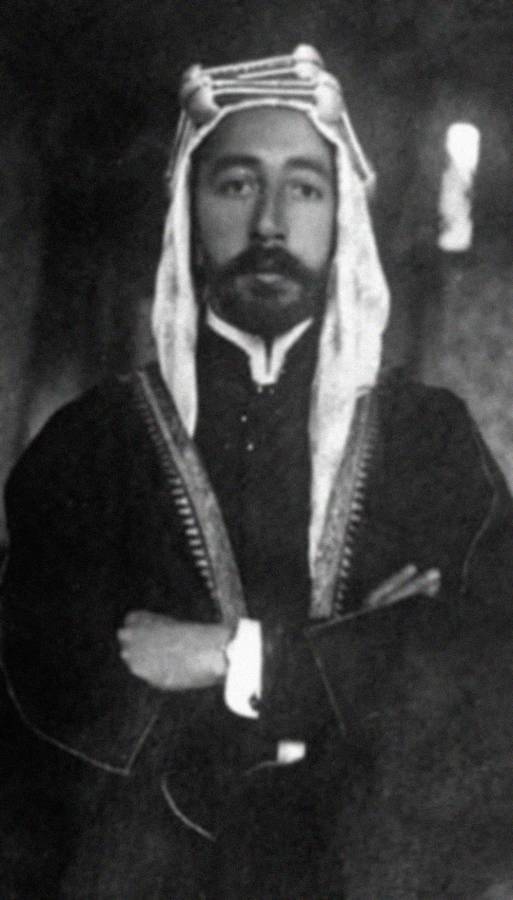 The first Dispute: Between the Sons of Sharif Hussein

The first and biggest of these disputes was between the children of Sharif Hussein bin Ali, the great-grandfather of King Abdullah II and the founding architect of the modern glory of the family. It is known that, during the correspondence of Sharif Hussein with Henry McMahon, the British High Commissioner in Egypt, it was agreed that his sons would rule the Arab countries that would be liberated from Ottoman rule upon the victory of the Great Arab Revolt and the liberation of Arabs from Ottoman rule.

The crisis of King Hussein’s children ended quickly, after Prince Hamzah announced his submission to his older brother King Abdullah II. Anyone who reads the Hashemite family’s history knows that disputes between its members is always dealt with in this fast manner 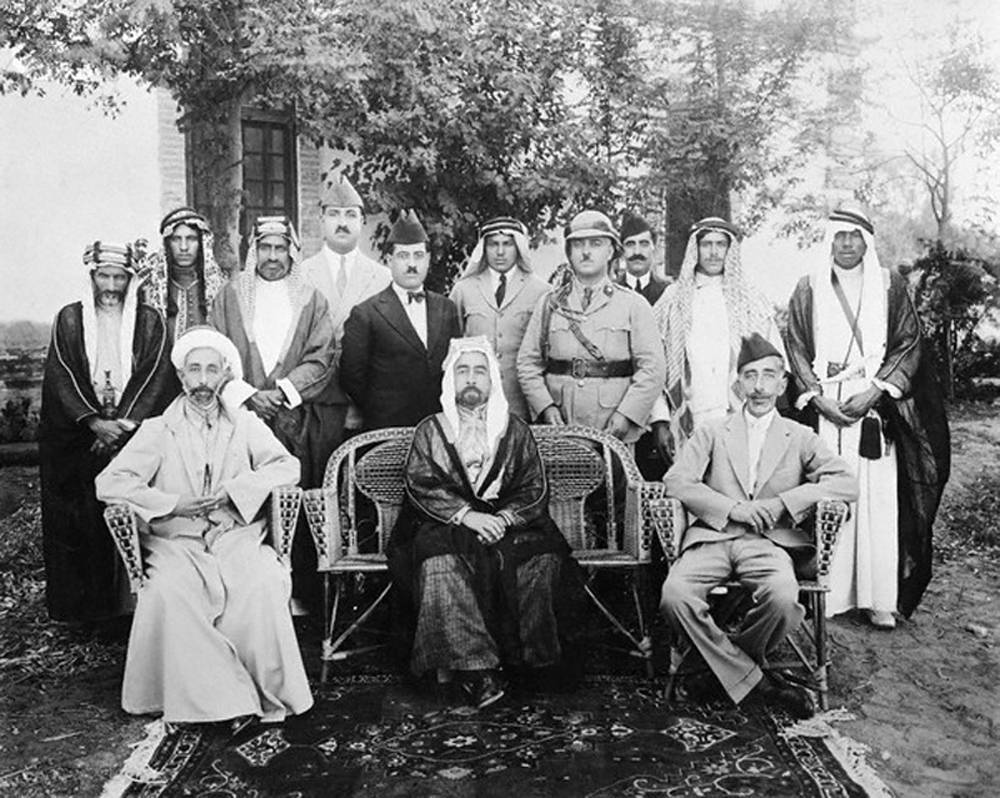 This project was partially realized when Sharif Hussein took the throne of Hejaz and pledged allegiance to Faisal as king of Syria on March 8th, 1920. But he stopped at the gates of Iraq because of an armed revolution against the Brits (known as the Iraqi Revolt of 1920), which forced Prince Abdullah to accept the position of foreign minister in his father’s kingdom — something that was by far inferior to his limitless ambitions.

But then the Hashemite agenda collided with the ambitions of the French Republic, which had sent its military forces to station along the coasts of Syria. It did so in preparation for the country’s occupation under the Sykes-Picot Agreement signed during the First World War between the British government and its French counterpart.

King Faisal opposed the French mandate system, seeing it as an encroachment on his reign. This led to a military confrontation to take place between him and the French on July 24th, 1920. The confrontation led to his ouster from the throne as well as the imposing of the mandate by force of arms over the entire territories of Syria.

Upon hearing this news, his brother Prince Abdullah became furious and formed an army of his deputies to liberate Damascus and restore the throne that was stolen by force. But the goal was to make himself king of Syria in his brother’s stead. This situation led to a dispute between Faisal and Abdullah due to them pursuing the same throne within the very same city.

The best known of the disputes was between the sons of Sharif Hussein bin Ali, the great-grandfather of King Abdullah II and the patriarch of the family. A dispute occurred between his sons Faisal and Abdullah who both wanted the Kingdom of Syria

The British government contacted Prince Abdullah and asked him to stay in the city of Amman and establish a rule for himself — and his children after him — within its territory, telling him to forget about the throne of Syria. Abdullah accepted the offer, but quite reluctantly, and kept dreaming of a bigger throne, either in Syria or in Iraq.

While Abdullah was getting his internal home affairs in order in Amman, Faisal was touring European capitals demanding his return to the throne in Syria. On December 9, 1920, the Brits offered him the choice of ​​assuming the throne of Iraq, but he initially rejected the idea, fearing Abdullah’s wrath and telling the English that the throne of Baghdad was, first and foremost, his older brother’s right.

The British government contacted Prince Abdullah and asked him to stay in Amman and establish a rule for himself - and his children after him - within its territory, telling him to forget the throne of Syria.

Abdullah was not satisfied with his emirate — poor in resources, and small in size. One of the British officers described him as “a hawk in a cage like a blaze, dreaming of Damascus but ruling a small city called Amman”. The Brits asked Faisal to mediate with his brother in order to stay in Transjordan (east Jordan), but Faisal responded by saying that there is an elder in the Hashemite family whose counsel he cannot go past or surpass, and that it is that of their father Sharif Hussein.

The Second Dispute: Between Abdullah and Talal

After settling in Jordan and turning the emirate into a kingdom in 1946, King Abdullah appointed his son, Prince Talal, as heir to the throne. Much has been written about this man, and it is said that he suffered from a weak mind and a mental impairment of sorts, or rather, schizophrenia. The truth is that Abdullah was the cause of his own son’s decline in health, because he was a powerful, overbearing, and an extremely demanding father. 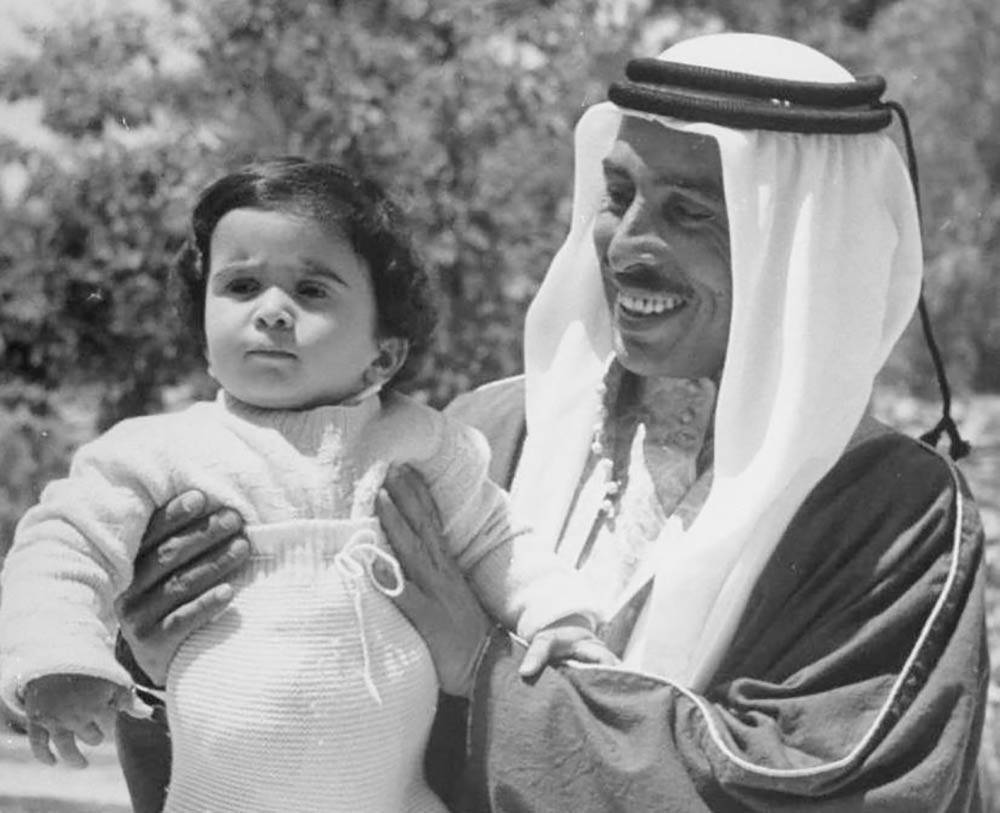 The founding king was a distinguished military figure. He was raised within the cities of the desert and had a taste of their harshness. He loved hunting, playing chess, and ‘playing on the edge of the abyss’. He also spent many years in the battles of the Great Arab Revolt, which turned him into a strong, hard man not afraid of any risks or challenges.

As for Talal, he lived his childhood with the women of the household, far from his father and all the men of the family — something that greatly affected his personality. He grew up and became a calm and gentle young man that loved solitude and spent most of his time reading. He was a polite and peaceful boy, deliberately evading problems and avoiding confrontations.

After settling in Jordan and turning the emirate into a kingdom in 1946, King Abdullah appointed his son Prince Talal heir to the throne. Much has been written about this man, and it is said that he suffered from a weak mind, or rather, schizophrenia.

King Abdullah was none too pleased with what he saw in the personality of his son and his crown prince, so he decided to raise him again so he would be fit to rule Jordan. For example, Talal wanted to study at the American University of Beirut (AUB) with the elite intellectuals of the Arab world, but Abdullah sent him in a rage to the Sandhurst Military College in southwest London, to make a combat officer and a fierce warrior out of him. 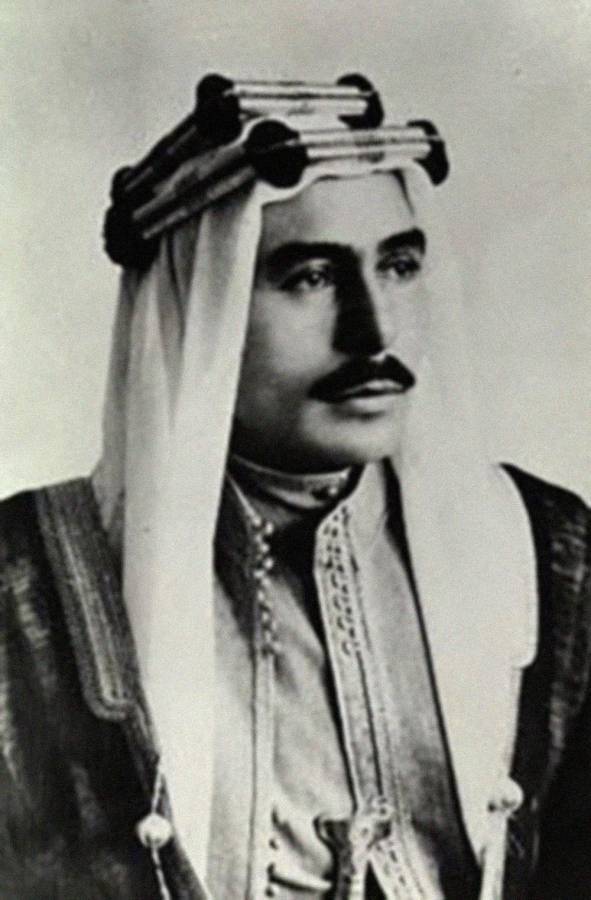 But Talal did not accept the life of the military school he was in, nor the roughness of its students and their crass jokes. He left college and returned to Amman, and he wanted to marry a simple girl that he loved, but his domineering father intervened again and insisted on him marrying Sharifa Zein bint Jamil bin Nasser, the daughter of one of his allies in the Great Arab Revolt. 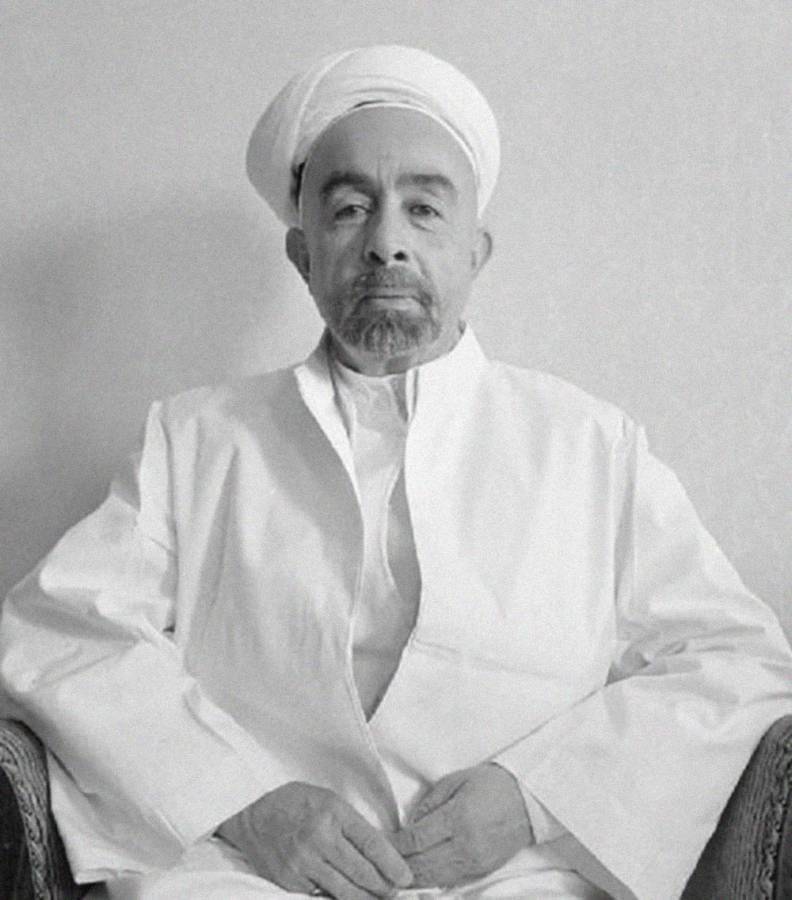 The disagreement between father and son escalated to the point of Talal leaving the family palace and renting a simple apartment in Amman to escape from the king. Several people intervened to quickly wrap up the dispute, before it made an appearance in Arab newspapers. Talal could do nothing but submit to the current situation, and he returned to live under the wing of his father, trying to do the impossible to win his approval, to no avail.

In his memoirs published in the year 1962 in Egypt, King Talal says that a plot was hatched against him to force him to step down, and that his wife Sharifa Zein stood behind it in order to secure the throne for her son

Upon the death of King Abdullah in Jerusalem, Talal ascended to the throne of the Kingdom of Jordan on July 20th, 1951, but was forced to step down in favor of his son, Prince Hussein (father of King Abdullah II) on August 11, 1952. In his memoirs published in the year 1962 in Egypt, King Talal says that a plot was hatched against him to force him to step down, and that his wife Sharifa Zein stood behind it in order to secure the throne for her son.

Talal left the palace without putting up any resistance or much of a fight, preferring to live in a small villa in Istanbul rather than within the palaces of his family in Amman. However, he did not once make a single statement against the new reign, and he refused to criticize King Hussein in his council, continuing to maintain his loyalty to the king until his death in 1972.

The Third Dispute: The Rebellion of Princess Azza

The single exception to this rule came in the story of Princess Azza, the eldest daughter of King Faisal I. Her crime did not come in the form of a military coup or a political rebellion, but rather a familial one. She fled her family’s palace in Baghdad to join her Greek lover in Europe, in the biggest scandal known to the House of Hashim. 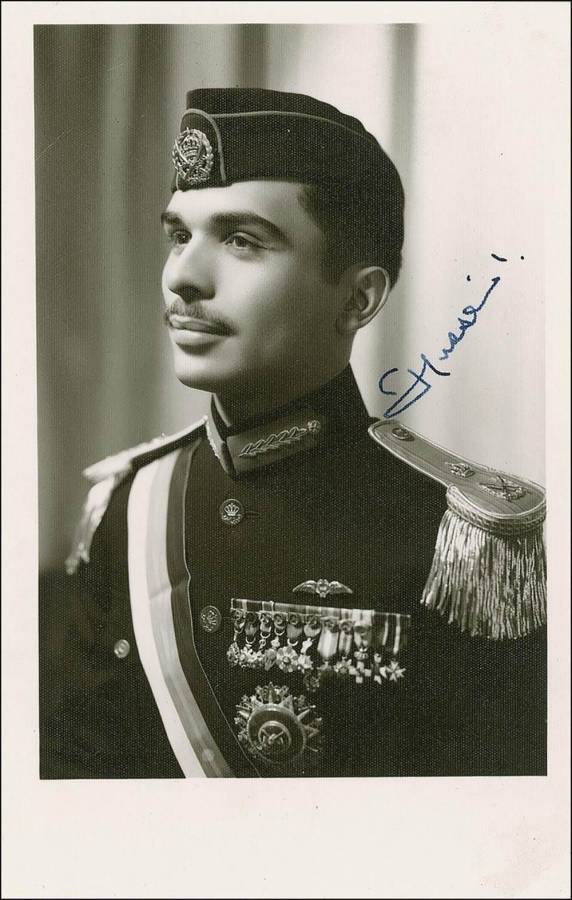 Her lover “Anstas” was working as a waiter in one of the restaurants on the island of Rhodes. After Azza arrived and was married to him, he persuaded her to convert to Orthodox Christianity. She also changed her name to “Anastasia” after the Tsar of Russia Nicholas II’s daughter, who was rumored in Europe that she was still alive and wasn't killed along with her family members in 1917.

The crime of Princess Azza, the eldest daughter of King Faisal I, didn’t come in the form of a military coup or rebellion. It was rather familial, fleeing her family palace in Baghdad to join her Greek lover in Europe in the biggest scandal known to the House of Hashim

Azza agreed to all of this and left a letter to her family informing them of her rebellion against them and their religion, which led to all family members disowning her and banning her from returning to Baghdad after being stripped of her royal title. But the rebellious and revolutionary marriage did not register for long, and Anstas split up with Anastasia after taking all her money and jewelry. She went on to live out a poor and destitute existence in Europe, until her uncle King Abdullah I pardoned her and brought her back to live in Jerusalem first, then Amman, until her death in 1960.