Delicate green leaves sit on the branches of a tree that doesn’t stand at more than seven meters high. They embrace clusters of white flowers that fill the atmosphere with their strong and enchanting scent. This fragrant plant has survived through the ages and times, transcending the borders of its original homeland and imposing its presence in most countries of the world, spreading so far and wide that no one knows where it actually grew for the first time.

Its name is the henna tree, an age-old tree that the ancient Egyptians used and was recommended by the Prophet of Islam, before medical research confirmed its importance, making it a medicine, a blessing, and a good omen through time and history.

Brought to Egypt by the Hyksos

Legend has it that man discovered henna dye when some animals devoured its leaves, and noticed that the color of their mouths remained changed for days. But where did it first appear? No one knows, but it is likely that it first grew in West Asia and then moved to China and India, and then to the countries of the Mediterranean basin when the ancient Egyptians discovered it and used it in beauty and embalming, as Dr. Hussein Daqeel, a researcher and academic specializing in archeology, confirmed to Raseef22. He says, “Ancient Egyptian women were fond of adornments and cosmetics like perfumes, creams, and precious essential oils, so it was far from suitable for her to go out to a party or banquet without adorning herself and putting on makeup.”

In ancient Egypt, women used many cosmetics, both for skin and hair. They liked dyeing their hair, especially in red and brown colors. This was a dye they’d obtain by using henna paste through mixing henna powder with water, then massaging their hair with it while it was wet with water, and leaving it overnight. Aside from changing color, the hair also becomes soft and shiny, in addition to the fact that the henna strengthens the roots of hair and prevents it from falling out.

An age-old tree that was recommended by the Prophet of Islam and ancient Egyptians used to prepare to meet their gods, before medical research confirmed its importance, making it a medicine, a blessing, and a good omen through time and history.. It is the henna tree

Henna was not only used to dye hair, but was also used by ancient Egyptian women to polish their nails, as well as to be blessed by it, by using it to paint their hands and feet on festive occasions, a custom that still exists to this day.

Henna, some historians say, was brought by the Egyptians from Persia, where it was grown. Others say that it was the Hyksos who introduced henna to Egypt and taught the Egyptians how to grow it. Henna was also used in the mummification process.

Isis, Osiris, and the Henna Night

Egyptians believe that henna is a blessed plant that drives away evil spirits, eliminates hidden satanic forces, and brings luck and blessing. This belief was passed down generation after generation even before Islam came to Egypt and the Prophet Muhammad, peace and blessings be upon him, advised his people to use henna.

Many different sources mentioned that the henna night that precedes the wedding day is but a purely Egyptian custom, invented by the Egyptians that were influenced by the famous myth of Isis and Osiris. The legend goes that "Set" killed his brother “Osiris” and tore his body to pieces then distributed them in the different regions of Egypt. But his faithful wife Isis collected the pieces back again until her hands, covered with his blood, became stained red, so much so that the Egyptians consider it a symbol of love and loyalty, so they now dye a bride's hands before marriage so she'd be faithful to her husband like Isis was. 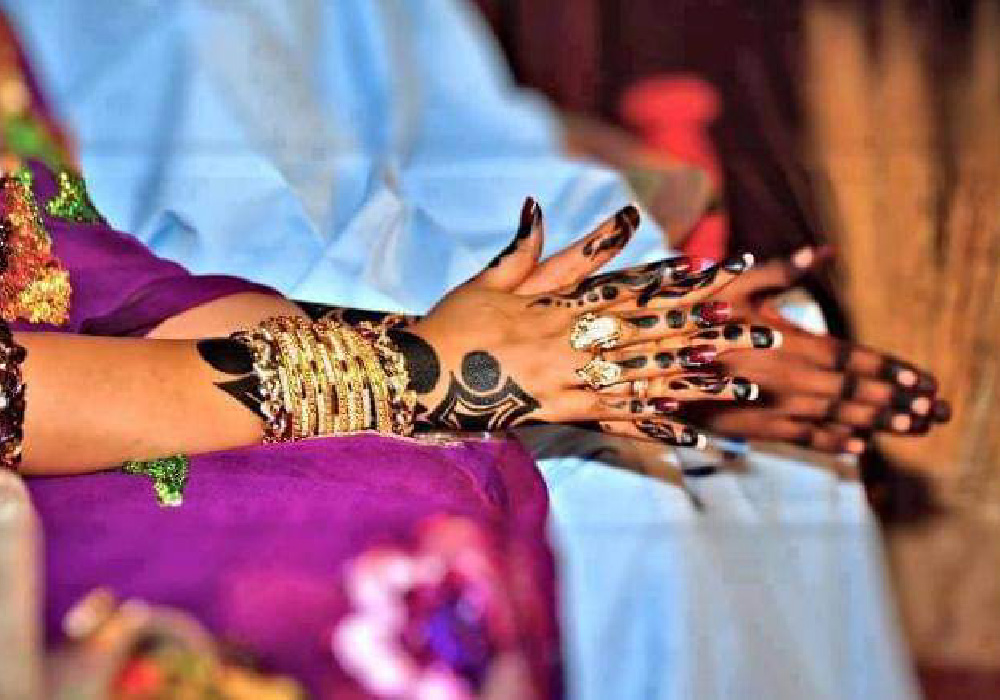 That is why Egyptians still celebrate the “Night of Henna”, and create special rituals for it, as is the case in Upper Egypt, especially in the villages of Nubia (also Nuba), which still retain their ancient traditions despite the spread of urbanization and openness.

Mahmoud Qutuz, a 48-year-old employee in one of the sectors of the Egyptian Ministry of Culture, is a resident of the village of al-Maliki, one of the villages where Nubians settled after the first wave of displacement associated with the construction of the Aswan Dam. Qutuz tells Raseef22 about the “Henna Night” in Nubia, “Celebrating henna in the Nubia area is special and is distinguished from the rest of Aswan or Upper Egypt in general. The villages of Nubia before the displacement had an extension of kinship with areas in Sudan, so the weddings were similar to Sudanese rituals.”

The groom's sisters prepare henna, adding materials of Sudanese origin, such as mahlabiya, which gives it a strong scent and changes its color over time from red to black. The henna is placed in a pot with lit candles, then in a decorated cage and is carried by the groom's family to roam the village

Mahmoud tells us about the groom's henna in Nubia, "The groom's henna ritual is for an entire day, not just one night, as is customary in all parts of Egypt, where the groom sits on a wooden sofa in the street in front of his house wearing a short cotton robe called "al-Iraqi", and ties "al-harira", a red ribbon of wool, around his wrist. Then his relatives and friends gather around him."

He continues, "His sisters and female relatives prepare henna, as they knead it with water and then add materials of Sudanese origin, such as mahlabiya, which gives henna a distinctive scent that lasts for a week, and changes its color over time from red to black. Then the henna is placed in a pot with lit candles, then inside a cage that is decorated and is carried by a large group of the groom's family — children, young men and women — to roam the streets of the village chanting various songs behind the ones carrying the henna cage dish. Then they return to where the groom is and the groom's female relatives paint him with henna while he is sitting on the sofa. The henna process is done by four women who paint his palms. After placing the henna in the palm, he clenches his hand to put the henna on the tips of his fingers from the outside, and then on the soles of his feet only.”

Egyptians believe that henna is a blessed plant that drives away evil spirits, eliminates hidden satanic forces, and brings luck and blessing. This belief was passed down even before Islam came to Egypt and Prophet Muhammad (PBUH) advised his people to use henna

"During the henna process, some traditional songs are chanted by one of the groom's relatives using the ‘daf’, which is a drum made of wood and goat skin, so that the neighbors, friends and relatives standing around him can repeat after him, while some of the closer relatives place points on the henna, which are a sign of love," Mahmoud adds.

It is worth mentioning — according to Mahmoud — that the groom’s henna is done at the end of the night. After the henna, he rests with his back on a large cushion and tries to sleep half-sitting until the henna is removed after a while using mahlabiya.

After the completion of the groom's henna process, the remaining henna is distributed to those present, and this task is carried out by one of the attendees in a cheerful ritual. The henna of the bride in Nubia differs from the groom in that it takes place inside the house in the presence of women. The woman who paints henna draws the dye in unique patterns on the hands, feet, and parts of the body. The next day, some people hold a night called the “Night of Henna” to celebrate it, and would be done either by either "al-kaff", a type of Saidi folkloric singing, or with a band on a wooden stage. It is followed by the wedding night itself. This is what Mahmoud knows about wedding henna in Nubia. But Hiba Othman, who has Nubian roots, gave us other details. She confirms to Raseef22 that there is a ritual that the bride performs before henna, which is "dalke", where the bride's body is massaged with natural essential oils and sandalwood to make her body smell nice all the time despite sweating. After that, the henna is painted, but in a heavy manner so that the entire foot is dyed with henna, and the drawing is done on the top of the foot and leg. As for the arms, the fingertips are dyed with henna, along with the back of her hands and arms.

Hiba stresses that women in Nubia use henna throughout the year and not only on occasions, as it is an essential detail in their cosmetic tools, especially married women.

This was also confirmed by Mahmoud Qutuz, "Henna in Nubia is not only for beauty, but we have been using it as a remedy since ancient times. In the event that someone has a fever, we mix tahini powder with qard (a herb extracted from the acacia tree) after grinding it. The feet and hands are then painted by henna in the normal way and the temperature decreases immediately."

The use of henna in the treatment of high fever has been known throughout different times. It is mentioned in Dawud al-Antaki’s book, "Ticket to the Minds and the Collector of Wonder", known as "The Ticket of Dawud", in which he confirms that it expels fever and eliminates headaches. It also treats the spleen, joints, and various infections, removes head sores and repairs hair.

It was also recommended by Muslim scholars, including Ibn al-Qayyim, al-Muwaffaq al-Baghdadi and Ibn Sina, who confirmed that it is useful in treating burns, wounds, and mouth ulcers, along with treating leprosy and kidney stones.

The discovery of the benefits of henna was not limited to aforementioned Muslim scholars only, but it was also of interest to modern medicine. Dr. Muhammad Nizar al-Daqr confirmed in articles published on the site ‘The Miracle of the Qur'an and Sunnah’ about henna, that Malek Zadeh, professor of microbes and germs at the University of Tehran, confirmed in one of his published studies that henna has an effective ability to kill germs. Dr. Hussein al-Rashidi, a doctor and researcher in bacteria and microbes at American universities, confirmed in a study published online that years ago he began using henna in medical treatment, after he read the hadith of the Prophet PBUH narrated by al-Tirmidhi (the Prophet did not get an ulcer or a thorn without putting henna on it).

After several years of testing and experimentation, he called it a magic plant. He discovered through research and experiments the high ability of henna in treating burns and wounds and stopping bleeding. It has also been shown to be effective in protecting the feet of diabetic patients, back pain, ulcerative colitis, and duodenal bleeding.

We Separate the Head From the Body... The Art of Body Painting with Hidden Faces

The Nubians of Egypt: A History Obscured By Stereotypes

Raseef22 constantly strives to break the cycle of dominance enforced by those who long for a nostalgic, authoritarian past. We present ourselves as rulebreakers and changemakers who are not afraid of speaking up and challenging the very dated conventions that prevent us from moving forward...Your story is missing here!! Join the conversation..be the change!

Our past, present, and future are intrinsically intertwined, and directly affect each other throughout history. The current trend sees an inability to let go of the past, which still dictates a large part of present and threatens the future and what potential it can hold. Change for a better future! Take action!