Etel Adnan, influential Lebanese American poet, essayist, and visual artist, died at the age of 96, peacefully at her home in Paris. She leaves behind her longtime partner, renowned Syrian Lebanese artist Simone Fattal. Over a lifetime that spanned almost a century, Adnan had multiple lives, through her work in journalism, teaching, writing, painting and poetry, she had a profound impact on a multitude of people. An outpouring of tributes, memories and condolences continue on social media, as her life is celebrated, her memory cherished, and her loss mourned by many all over the world.

Etel Adnan and Simone Fattal, photographed at their home in Bretagne, July 2021.Photographs by Louis Canadas for Art Basel.

The countless facets of her career come in part from her multiple identities, as she grew up in a mixed household, with her Greek, Christian mother from Smyrna (now the city of Izmir) and her Syrian, Muslim father from Damascus, who was a high-ranking Ottoman officer, in the city of Beirut, which she held dear to her heart. Her exposure to multiple languages and faiths from a very young age became a formative aspect of her identity, as did her time in Lebanon.

Over a lifetime that spanned almost a century, Etel Adnan had multiple lives, through her work in journalism, teaching, writing, painting and poetry, she had a profound impact on a multitude of people

She considered her age a ‘gift of the heavens’ (un cadeau du ciel) for the perspective that it offered her. In her nineties, she claimed to have a unique perspective on the country of Lebanon, because she was born in 1925, so close to the founding of the Lebanese state (established in 1920, constitution, 1926). She considered herself a guardian of the memories of Lebanon, in an interview with Ricardo Karam in 2019 she described growing up in a cosmopolitan Lebanon, witnessing the many periods of its history. She described seeing the period of French rule, the World War, and the first generation of women who were able to swim, and who were able to work, witnessing the liberation of the women of her generation.

Actively engaged in the liberation of her generation, she was among the first Lebanese women to work in an office. At 16 years old, she worked at a press office, where she described seeing the end of the war. Adnan painted liberty through her vibrant canvases, dabbing and spreading saturated colours of vitality with her palette knife. She believed that liberty was a gift that had to be earned, for her, love existed between two liberties. Her ultimate liberty was her ability to maintain her childlike spirit and her ability to dream. In the same interview, she described her dreams for a better world, ‘my dreams are not for me, but for my environment, I dream of a Lebanon that is at peace with itself, a Lebanon at the level of the quality of the people that live in this country’. Throughout her life and work she felt a responsibility and affinity towards Lebanon and the Arab world, constructing her mountains around them.

Etel Adnan in her student room at the University of California, Berkeley, c.1955.Etel Adnan, Untitled, 1961, Oil on canvas stretched on wood (Courtesy of Pera Museum)

Etel Adnan was educated in French schools in Beirut and studied philosophy at the Sorbonne in Paris. She later moved to the US for her postgraduate studies in philosophy at U.C. Berkeley and Harvard. Adnan taught philosophy and avidly wrote poems, essays, and plays to wide critical acclaim.

Etel Adnan: "I dream of a Lebanon that is at peace with itself, a Lebanon at the level of the quality of the people that live in this country"

She returned to Lebanon in 1972, where she worked as a cultural editor for two cultural journals, Al Safa and L’Orient le Jour, and met Simone Fattal in Beirut. Along with Fattal, she fled the civil war to Paris, where she wrote her award-winning novel Sitt Marie-Rose, which has become a classic of war literature. Simone Fattal describes her writing as ‘incisive, fearless, and fierce’, an apt description of her character and work across disciplines.

In an interview with SF MoMA in 2018, she described her first encounter with painting at the age of twenty, when she went to study in France. She went to the Louvre and described being so ‘innocent towards art’ that it impressed her beyond what she could dream of. ‘I considered myself lucky not to have contact with art before’, she said, ‘it hit me full strength’! Though she described loving drawing at school, it wasn’t until her mid-thirties that Etel Adnan began to paint, the visual arts at once connected with her writing. She saw writing as drawing and drawing as writing, the essence of both a form of photography of the soul, created for others in an ongoing dialogue.

Adnan felt most at home in the terrain of an urban setting surrounded by nature. She described finding beauty in the urban natural environment of San Francisco, where she would visit Redwood, Yosemite and her mountain, Mount Tamalpais, which became a central source of inspiration for her work. It reminded her of Beirut, a capital city close to the mountains. In her writings, drawings, and paintings, mountains were sensual beings, regarded in confluence with the skies and earth, erupting in volcanoes. 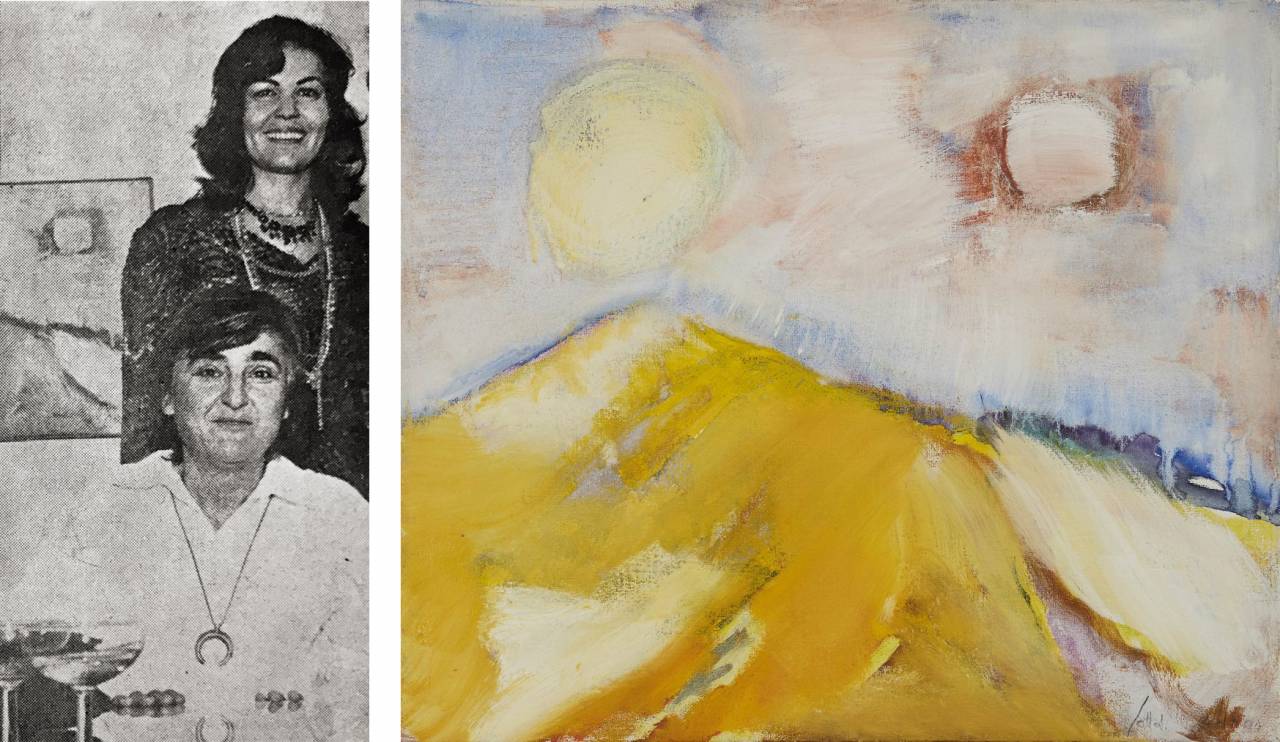 Etel Adnan and Simone Fattal with the only artwork they made together, La Montange, Liban, 1973 in the Barjeel Art Foundation collection.

Mount Tamalpais recurred often in her paintings, each time in different colours, shapes, and forms. On Tamalpais, she told Simone Fattal that the process of painting and writing gave her the implicit certitude of what the mountain was, of what she could see, but ascribed an autonomy of being to both the mountain and her depictions of it.

In an interview with Ricardo Karam, he asked Etel Adnan how she wanted to be remembered; she replied she wanted people ‘to remember that I love the world, that I loved the universe and being alive was a gift of the universe’.

She employed a bright, rich palette that she attributed to her identity as a ‘Californian artist’, finding joy in constructing things in colour. As a child, Adnan wanted to be an architect. Upon closer inspection, her paintings reveal what Simone Fattal called the ‘vocabulary of an architect’, which can be seen in her approach to carefully constructed compositions. Through paintings, drawings, tapestries and leporellos (small booklets folded in concertina), Adnan wove stories and poems in her signature abstract language of light. In an interview with Apollo magazine, she describes evoking an internal landscape ‘a landscape that is in me’. Exhibitions of her work have been mounted in institutions all over the world, including the San Francisco Museum of Modern Art, Zentrum Paul Klee, Bern, Institute de Monde Arabe, Paris and The Serpentine Galleries in London. She has exhibited at Documenta 13 in Kassel, Germany, the Sharjah Biennial, UAE, and the Whitney Biennial in New York.

The American-Lebanese artist and writer at home in her studio workshop on 8 April 2015 in Paris, France. Photo by Catherine Panchout / Sygma via Getty Images

Adnan’s work is currently on view at the Solomon R. Guggenheim Museum in New York, in the exhibition ‘Etel Adnan: Light’s New Measure’ and at Sfeir-Semler Gallery in Hamburg, in an exhibition of new works on the occasion of the 2021 Lichtwark Prize to be awarded to Adnan posthumously on November 18th.

In a sense of commitment and responsibility to the world, Adnan gave generously of her time, her gifts and herself, with an increasing sense of urgency towards her final years. She wrote of the universe, of life, death, nature and cities, and mountains and women. In the mornings after her death, the universe mourns its self-proclaimed ‘best-friend’. Adnan believed that memory works against death, the collective memory acting in what she described as a mad form of denial in disguise (la folie déguisée). In her interview with Ricardo Karam, he asked her how she wanted to be remembered, she exclaimed that she wanted people ‘to remember that I love the world, that I loved the universe and being alive was a gift of the universe’.

The voice of those who won’t give in... Emel Mathlouthi and the call for "Revolutionary Art"

Andy Warhol, the Prophet of “Pop Art” Pops up in Tehran’s Museum

A story of money, garbage and jobs in Algeria