Like other landmarks in the Gaza Strip, archaeological sites are vulnerable to Israeli aggression at any moment. They are also literally subject to total destruction through violations by official and unofficial Palestinian entities despite the laws that prohibit encroachments on these sites. This investigation documents the systematic violations against the most famous archaeological sites in the Gaza Strip and the failures to protect them.

The archaeological site of Tall Al-Ajjul in the village of Al-Mughraqa in the center of the Gaza Strip has been transformed into a residential area and agricultural land. The features of the site have faded over twenty years of repeated encroachment by residents.

The archaeological site of Tall Al-Ajjul in Al-Mughraqa in the center of the Gaza Strip has been transformed into a residential area and agricultural land. The features of the site have faded over twenty years of repeated encroachment by residents.

In its classification, the British School of Archeology that focuses on archeological research,  says that this site dates back to the Middle Bronze Age between (2200 - 1500 BC) and the Late Bronze Age between (1500 - 1200 BC) after the excavations it conducted on Palestinian sites during the British Mandate period (1920 -1945). The site had also seen limited usage in the eras that followed, including the Iron, Roman, Byzantine ages, all the way up to the Islamic period.

The excavations were carried out under the supervision of the British scientist William Flinders Petrie in the early thirties of the past century, who found artifacts, coins, ancient tools, buildings and palaces. This was documented in four volumes entitled “Old Gaza”, and relics from the site are on display even today at the British Museum in London.

Dr. Mu’in Sadiq, professor of History and Archeology at the University of Toronto explains that these discoveries are taught at universities in Canada, the United States and Britain.

During a tour of the site in May 2021, we could only find some pottery pieces as the archaeological landmarks and the various layers as documented in the 1930’s as well the findings of an excavations team that had visited the site between 1999 and 2000 have faded. Houses and farmland have crept up on the site area.

The new state of Tall Al-Ajjul site astounded the Austrian-Swedish archaeologist Peter Fischer who specializes in Eastern Mediterranean and Near East archaeology, and had led the Palestinian-Swedish expedition in Tall Al-Ajjul in 2000.

When we showed Fischer the recent photos of the site, he said that “From what I have seen, building houses, planting olive trees and razing the site destroyed the most important ancient Palestinian heritage. People think in the short term, and they ignore their responsibility towards previous generations that have built our world. It is our duty to preserve the ruins of that world.”

Fischer considers Tall Al-Ajjul a “multicultural site” important for world heritage. He explains, “The site shows inter-connections between cultures extending across the Mediterranean region and even to further inland eastward. It was a gate linking Egypt and Syria and had extensive trade relations with Cyprus, but (recently) humanity has lost one of its most important heritage in the Levant.”

The recent deteriorating condition of Tall Al-Ajjul was preceded by a series of violations documented by Fischer himself during his last visit to the Gaza Strip in 2011 before Israel banned him from visiting the area again. He explains how houses and olive trees were encroaching everywhere on the excavation site that he had fenced off on his first visit. He says that vestiges of the Late Bronze Age have been destroyed. This made him wonder about the fate of the artifacts that must have been found by the aggressors when they built the houses or cultivated the land.

Today, the violating residents treat the land of the site as though it was their own property. One of them confronted the investigator while he was visiting the area claiming that “strangers are not allowed to take pictures of my agricultural plot of land.” The new resident expressed his fear of gangs that might steal antiquities from the site as he pointed his hand towards a hole under an area planted with olive trees which it seems (thieves) have been excavating at night.

We passed on this information to the Ministry of Tourism and Antiquities run by Hamas in Gaza. The Director of the Conservation and Restoration Department, Ahmad Al-Bursh, admitted that his ministry did not act to protect the site “because this process needs material and human capabilities.” He said, “The attack on Tall Al-Ajjul is an old issue, and the ministry has no knowledge of it. And that the site was abandoned after the days of the Palestinian Authority.”

Mu’in Sadiq was the Director General of the Antiquities Department in the Ministry when the Palestinian Authority controlled Gaza between 1994 and 2005. He admits that the site was subjected to violations during that period as it also did during the Israeli occupation of the Gaza Strip between 1967 and 1993. However, he confirms that his ministry took some measures in order to secure the site, this included placing a sign to warn against encroachments on the site since it is an endowment property, as well as providing security. These measures are currently not available.

Sadiq says, “Razing parts of the site used to happen on Fridays as it is the day when the guards would be off duty. For example, some bulldozing operations by unknown parties would happen to gain additional agricultural plots on the hill, especially on its southern side. Another violation was committed in order to build a house before 2007 despite our objections. Unfortunately, the owner of the house used his influence to proceed with the constructions as he was well connected. Only people with influence or people supported by such persons or their families would dare to do that.”

The status of Tall Al-Ajjul is not much different from the large percentage of 76 other archaeological sites spread across the Gaza Strip. The authorities were clearly unable to protect these from infringements, but they were also parties to the violations carried out in some of them.

During the Palestinian Authority era of control of the Gaza Strip between 1994 and 2007, four “intentional” violations of archaeological sites were recorded while eleven other violations were recorded during the period when Hamas controlled Gaza. According to the investigator the Palestinian division since 2007 in Gaza was a precursor for the increase in archaeological sites violations.

During the Palestinian Authority era of control of the Gaza Strip between 1994 and 2007, four “intentional” violations of archaeological sites were recorded while eleven other violations were recorded during the period when Hamas controlled Gaza.

Tall Al-Ajjul, Tall Al-Sakan, Al-Blakhiyah, and Tall Rafah, or Zo’rob are the largest archaeological sites in the Gaza Strip, covering around 740 dunums, that is 740 thousand square meters. These sites were not protected, and three of them saw violations carried out by official entities and citizens alike. Tall Rafah site has escaped direct violations but it is a site at risk due to the effects of the natural elements since excavations or restoration operations have stopped.

The government provided the necessary security to only three archaeological sites in the Gaza Strip: These are Tall Umm Al-Amer or the Saint Hilarion Monastery in the center of the Gaza Strip; Tall Rafah or Zo’rob south of Rafah; and the site of the Byzantine Church in Jabalia north of the strip. These sites have been restored using funds offered by international organizations, while seven other sites lacked proper protection, and greenhouses now have surrounded them. Other parts were littered with garbage.

A team of youths  called “Canaan Team” that specializes in monitoring key ancient landmarks via an English and Arabic digital platform claimed that landmarks at thirty-one archaeological sites in the Gaza Strip have disappeared as a result of urban expansion and continuous encroachments due to the absence of any classifications as archaeological sites in the Gaza land registry according to one Canaan members, Sundos Al-Nikhaleh.

The Ministry of Tourism and Antiquities in Gaza holds the Palestinian Authority responsible for protecting the lands from encroachments by the population during the period it controlled the strip. It also holds the PA responsible for not registering archaeological sites or classifying them as untouchable. In fact, that same Ministry (controlled by Hamas movement in Gaza) was also unable to protect these sites from encroachments as per Law No. (11) of 2018, governing cultural heritage in force in the West Bank and the Gaza Strip. This law prohibits the violation of sites and the destruction of elements and components of tangible and intangible heritage sites.

The Ministry of Tourism and Antiquities of the Palestinian Authority in the West Bank did not respond to our queries related to violations that happened while it controlled the Gaza strip. 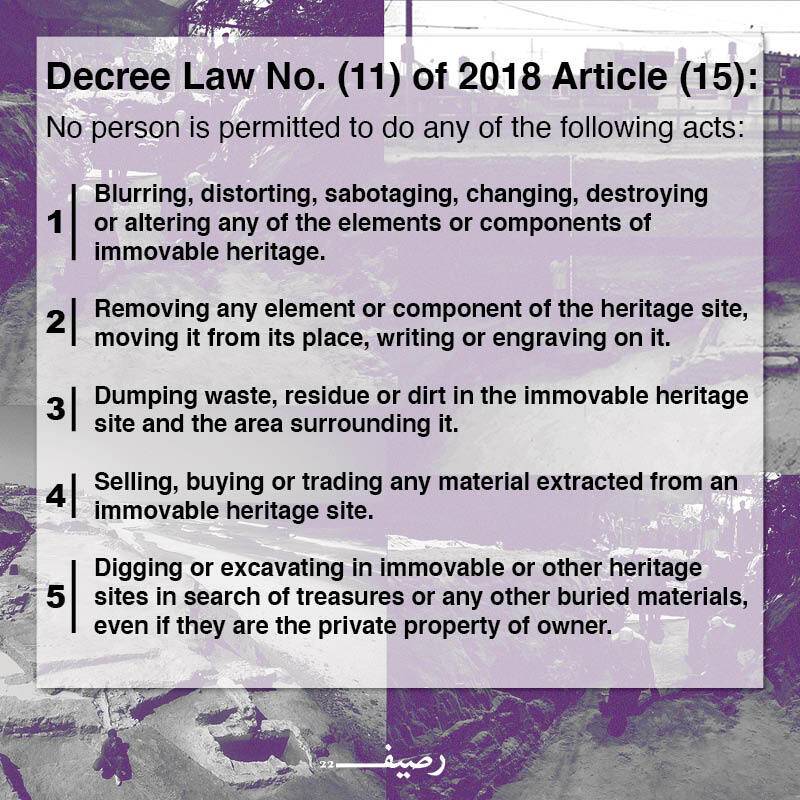 This investigation could reveal also that the violations at the site of Tall Al-Ajjul apply to most archaeological sites in the Gaza Strip.

It used to be one of the most important commercial ports in that period which is a testimony to the mobility and trade activities of ancient Palestinians with the outside world.

A city wall built in the era of the Assyrians

Coins and artifacts that date back to different periods, starting from the Canaanites to all the way to the Ayyubids

- Constructing the Shate’e Police Station on the site in 2013

- Constructing a stadium on the site in 2018

The director of the Department of Conservation, Preservation and Restoration at the Ministry of Tourism in Gaza Ahmad Al-Bursh claims that the violations against Al-Blakhiyah site are not a cause for concern as he believes that on site building help protect archaeological sites when those constructions or infringements are temporary. He explains that what harms antiquities is demolishing the area and constructing buildings with reinforced concrete walls. In his opinion, the suspension of excavations and the failure to secure archaeological sites were due to lack of external funding. Meanwhile, the Ministry of Interior did not respond to the investigator’s questions on the construction of a police station on Al-Blakhiyah site.

The director of the Department of Archeology at the French School of Biblical and Archeological Research, Jean Baptiste, stressed that in 2013 the Palestinian authorities in Gaza prevented him from continuing excavations on the site. Jean Baptiste headed the French team that excavated the site between 1995 and 2005. He returned to Gaza in 2012 to resume excavations but was banned in the following year when Al-Blakhiyah became a police station.

Baptiste says, “In 2005, the French delegation obtained approval from the Palestinian Authority so that the entire site of Al-Blakhiyah would become a national archaeological park, but Gaza’s government did not recognize the decision, and the site is now under the control of the police.”

This is one of the oldest archaeological sites discovered in the Gaza Strip. It represents evidence of human settlement that goes back to more than 5,000 years in the First Early Bronze Age (3000-3300 BC) and the Third Early Bronze Age (2650-2200 BC)

- Pottery remains that combine Pharaonic and Canaanite antiquities, such as mixing bowls, plates, and jugs

- Demolishing operations by the government to erect housing projects in 2017

It dates back to the Byzantine Age. Beit Lahia is referred to as “Beit Elijah,” which is the birthplace of the ecclesiastical historian Sozomenus who wrote about the history of the church in southern Palestine.

- Residents constructed a wall around the site

Location: Deir al-Balah, in the central parts of the Gaza Strip

- A cemetery dating back to the second Iron Age

The Last Fatwa on the Abaya: to Wear It or Not to Wear It