Social media users have launched online campaigns targeting the popular social media networks (Facebook - Telegram - Twitter) along with their affiliated companies. The joint effort came in the form of organizing campaigns aimed at pressuring these companies and punishing them for blocking, banning, or suspending any accounts that defend the Palestinian cause or discuss the details of attacks made by the occupation army across all occupied Palestinian territories in the West Bank, Gaza, as well as the occupied interior.

The company that owns Facebook, Instagram and WhatsApp has begun removing comments and banning any accounts defending Palestinian rights. Arab users accused it of creating a “media blackout on the Palestinian cause”, by suspending accounts and removing all content that refers to the violence enacted by Israeli occupation forces against Palestinians, claiming that the content violates Facebook community standards.

Tensions began escalating in East Jerusalem and Gaza between Palestinians and the occupation army about two weeks ago. This came after Israeli judicial decisions decreed that the houses in the Sheikh Jarrah neighborhood be vacated of their Palestinian residents, for the benefit of illegal Israeli settlement associations. This was followed by Israeli attacks on Palestinians within the occupied Palestinian interior (including the cities of Haifa, Jaffa, Jerusalem, Lod, Ashkelon, among many others), in addition to a violent military campaign on the besieged Gaza Strip that has thus far been ongoing for eight days.

One of the campaigns calling on people to stand up to Facebook’s policies was launched by a group that specializes in advertising and marketing on the online platform itself, on account of the Facebook administration preventing the publication and posting of content supportive of Palestine. Thus, those who had launched the campaign called on companies and advertising agencies to boycott Facebook on Friday May 21st, and stop posting or publishing any ads there under the hashtag “#Boycott_FB_21May”, with the aim of pressuring Facebook to stop removing content that is supportive of Palestine.

The boycott campaign denounced “the double standards of these social media sites, for while it readily removes content in support of Palestine, it allows for Israeli content to be published on its platforms without imposing any penalties.”

Another campaign was launched by social media users under the title “Unmute Palestine: Virtual Protest against Facebook Restrictions”, in order object to Facebook’s policies when it comes to dealing with content supporting the Palestinian cause by launching the hashtag “#UnmutePalestine”.

In its statement, the initiative said, “We represent hundreds of millions of users around the world, yet Facebook — and its associated Instagram platform — does not respect our views and beliefs and is oppressing our voices... as it bans and restricts accounts that publish [content on] the Palestinian cause... Our opinions and positions in support of Palestine are being restricted as Facebook deletes posts and disrupts accounts or pages that represent the Palestinian voice on the pretext that the content does not fit its Community Standards. Meanwhile, it supports pages and accounts that promote the Israeli narrative and gives it the full space to misrepresent the truth. Our demand from FB: ‘Stop harassing us. Stop blocking us. Your standards are double and unfair. Respect our voices’.”

Facebook’s practices in support of Israeli content have escalated at the expense of Palestinians, following meetings held by Israeli officials with social media companies, in order to block and prevent pro-Palestine content on social media platforms, accusing “extremist elements that have sworn to harm Israel.”

Israeli Defense Minister Gantz met with Facebook and TikTok executives on Thursday, May 13th via Zoom, and proactively called on them to remove all content that “incites violence” or “promotes terrorism”, in reference to content supportive of Palestinians and their cause

Israeli Minister of Defense Benny Gantz met with Facebook and TikTok executives on Thursday, May 13th via the Zoom app, and proactively called on them to remove all content that “incites violence” or “promotes terrorism”, in reference to content supportive of Palestinians and their cause.

On the evening of Saturday May 15 — which coincided with mass demonstrations in a number of major cities and capitals of the world to commemorate the Palestinian Nakba and condemn the nonstop Israeli attacks on Palestinians, especially unarmed civilians, as well as the continuation of the Israeli policies of ethnic cleansing against the Palestinians — the Telegram app deleted the channel of ‘Martyr Izz ad-Din al-Qassam Brigades’ (or al-Qassam Brigades) from the instant messaging communication platform, under the claim that it has violated the platform’s policies. In response, a number of Arab users called on people to respond to the company that owns the application by reducing its rating to one star on the Apple and Google Play stores.

Egyptian activist Hossam el-Hamalawy called for a rejection letter to be sent to Facebook, as well as follow the same approach with the Facebook application by giving it a low rating on the very same online stores (Google Play and Apple Store). 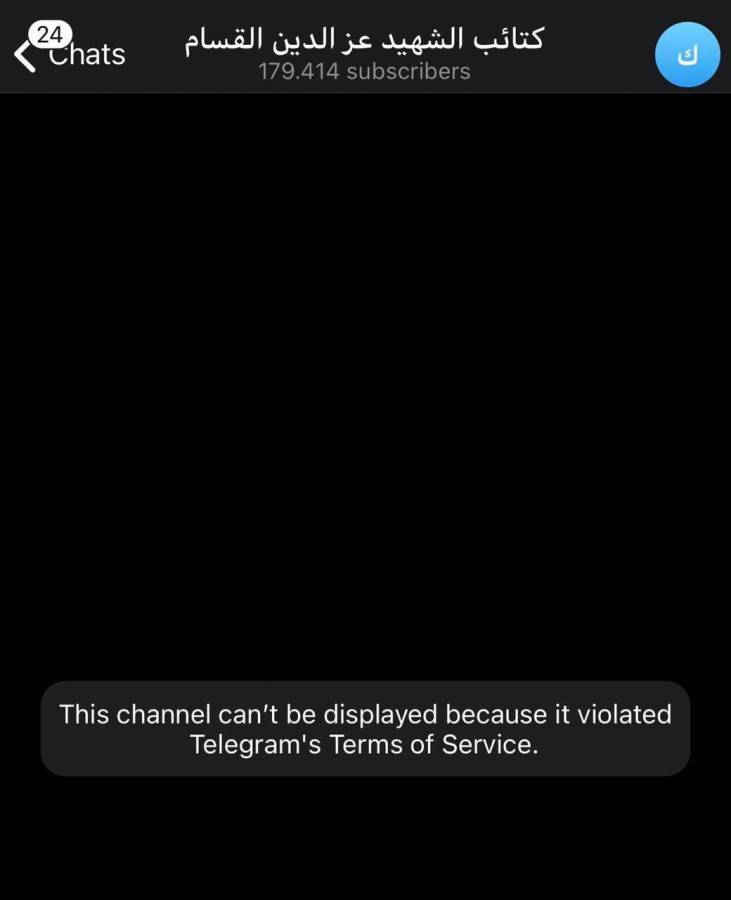 In the same context, the “Sada Social Center for Defending Palestinian Digital Rights”, a non-profit youth initiative that aims to do justice to Palestinian content on social media, accused Israeli occupation authorities of attempting to “impose its hegemony on social media platforms”.

The Center expressed its concern regarding the outcomes of the meeting between the Israeli Minister of Justice with the administrations of Facebook and TikTok, with the most prominent of these violations including the closure of the TikTok account of the Quds News Network by the platform’s administration. The center called on the administrations of the various social media platforms to stand “at the same distance” from all the users of their sites without discrimination or prejudice towards one party at the expense of the other.

Musab Qafesha, head of monitoring and documentation at the Sada Social Center, told Raseef22 that since the start of the Sheikh Jarrah events, they have monitored more than 250 instances of digital violations against pro-Palestinian content.

He went on to add, “We at Sada Social have contacted the administrations of several social media platforms, and thus, 120 accounts on Twitter and dozens of Instagram accounts have been restored.” However, the management of the social networking sites refused to restore a number of accounts on the grounds that they “violated its policies”.

The double standards of social media platforms have not gone by unnoticed. Several online initiatives have emerged to monitor Facebook violations against Palestinian content, including the initiative dubbed “7amleh – The Arab Center for the Advancement of Social Media” campaign, to resist the giants of technology and social media.

The initiative recently published a report on the censorship of Palestinian content through social media networks during the year of 2020. The report stated that social media companies have set themselves up as guardians of the community portal, considering that “what was previously used as a platform to avoid oppressors and exercise freedom of expression has now become the new oppressor that we fear.”

The report revealed that, since 2015, Israel has set up a cyber unit to stop “incitement”. For years, this unit has imposed censorship on media content without any local authority whatsoever, using its influence, authority, and relations with tech companies to remove the content.

According to the report, Facebook was the most to practice censorship on Palestinian content at 41.7%, followed by Zoom at 25%, and then WhatsApp at 16%.