“At times I forget to eat, I forget to go to the bathroom”, says Tony Khawam: “When I paint, I totally live with my paintings, that’s how 8 hours non-stop pass by, without even realizing it”.

Tony Khawam, a Syrian American artist, born in Aleppo, is based now in Florida, talks about his passion for art: “I do it for the love of art and painting, and on top of it, there is a cause”. Tony’s cause to exhibit and curate Syrian contemporary art works with a focus on socio-cultural issues, such as social disruption, immigration, and the American culture is initiated through artists collective online gallery with curated exhibitions sponsored by non-profit arts organizations.

Exhibited in Miami and curated by Syrian- American artist Tony Khawam, the exhibit "Emerging Art From War-Torn Syria: War and Hope", proves that Syrian artists can create brilliant art despite the decade of war their country has endured

The exhibit "Emerging Art From War-Torn Syria: War and Hope", curated by Tony, features the brilliant and beautiful art which Syrian artists are creating despite the decade of war their country has endured. Exhibiting 45 Contemporary Artworks by 12 Prominent Syrian American and Syrian Artists, the event started on Sept 1st and continues till Oct 23rd.

Tony was hosted on Saturday, Sep 19th to talk about the exhibition on a virtual Zoom interview by Mel Lehman, director of the nonprofit organization Common Humanity, both Mel and Tony started bringing paintings from Aleppo and Damascus, Syria, since 2019. 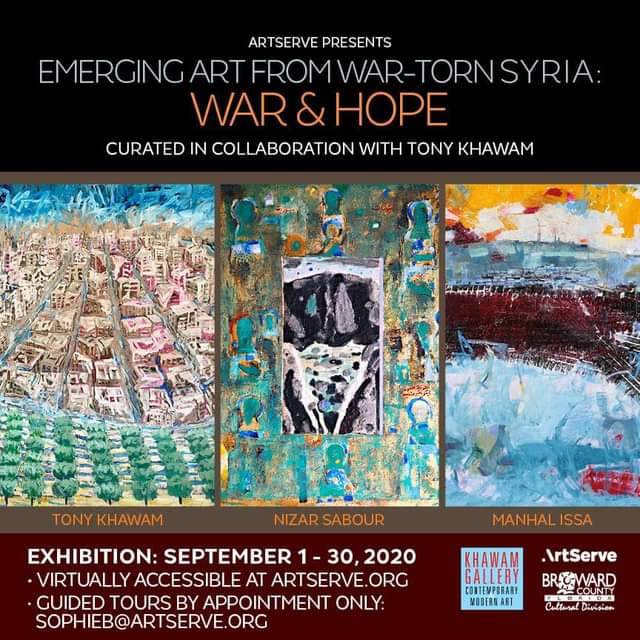 Mel Lehman has worked in international humanitarian issues for several decades, inducing two decades at the National Council of Churches. He has traveled extensively in the Middle East and has published a number of articles about his experience.

The Syrian art exhibits started in The U.S after Mel Lehman, the director of Common Humanity Organization, collaborated with Syrian artist Tony Khawam to exhibit paintings brought from Syria

He is the director of Common Humanity, which is based in New York City, and seeks to build understanding, respect and friendship with the Middle East and Muslim world. Since its establishment in 2009, the organization considered that the road to peace in the Middle East lies in recognizing the humanity of people on all sides of the conflict, and therefore, believes that “instead of sending more guns to the Middle East, we should be sending compassion and humanitarian relief supplies”.

During one of their visits to Damascus, the organization made contact through the United Nations High Commissioner for Refugees with a group of Iraqi refugee artists who had fled to Damascus. They began purchasing their paintings and bringing them back to New York, exhibiting and selling them, and with the money they received going back to Damascus and repeating the process by buying another round of paintings. The exhibits they’ve held have attracted hundreds of visitors who have expressed appreciation for the opportunity of seeing a part of the beauty and humanity of Middle East and Arab culture.

Encouraged by the positive response these works have received, the organization expand its outreach by bringing a traveling exhibit featuring the work of contemporary Syrian artists to Eastern Mennonite University in 2019.

Tony Khawam, is among the artists Lehman works closely with, and through his art work, he aims “to raise awareness in the hope of changing the perception from destruction — of haunting and disturbing scenes to hopeful, colorful neighborhoods that are filled with life”. When Tony told Lehman that he truly admires the work he had done with Iraqi art, but it’s time to introduce Syrian art, “it took me a nano second to say ‘yes’”, says Lehman.

In addition to the professional paintings, the organization exhibits, there are several dozen Christmas and New Year cards drawn by art students at the Universities of Aleppo and Damascus and sent to Americans who participated in Common Humanity’s recent Christmas and New Year’s Card Exchange.

The exhibit entitled “Emerging Art From War-Torn Syria: War & Hope” was curated by Tony Khawam and presented by ArtServe Miami (Exhibit Link ). The Artworks reflect the highly accomplished work of the contemporary art scene in America and Syria today.

While none of the works are political in nature, the influence of eight years of war is reflected in the style and content and artistic development of a number of the paintings. One of the examples on this Reem Terraf’s painting featuring bloody underwear left to dry on a rope full of laundry, showing that the bombs were falling on inhabited places, where there was life.

The works of Syrian artists in the "War and Hope" exhibit are not political in nature, but the influence of war is artistically present in a number of paintings

Other paintings employed historical, cultural and religious symbols, like Nizar Sabour’s painting “Maaloula No.13”, and Nitmat Badawi’s “The Syrian Crown of Thorns No.2”. “None of these artists are religious”, says Tony, “but they use the religious symbols, artistically like the pains of the Christ, to show that Syrian people, like the Christ are suffering”. 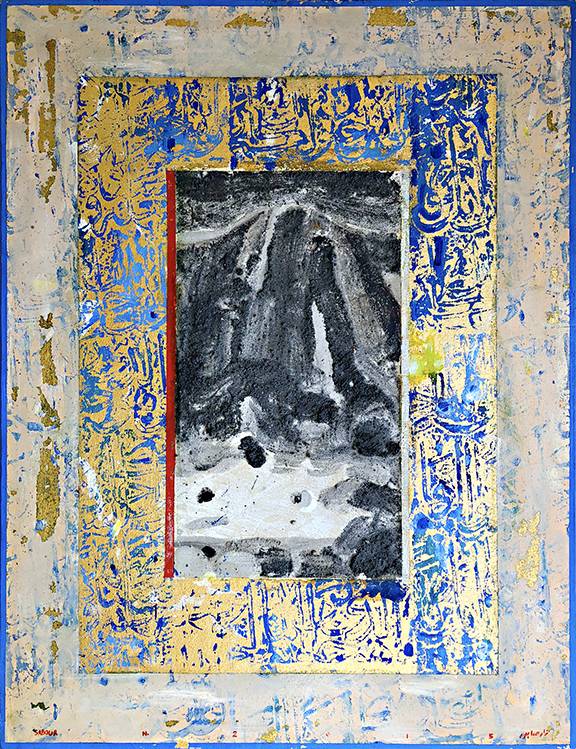 One painting by Manhal Issa shows the Qassion Mountain, one of Damascus most beautiful and famous landmarks with the city of Damascus in front of it 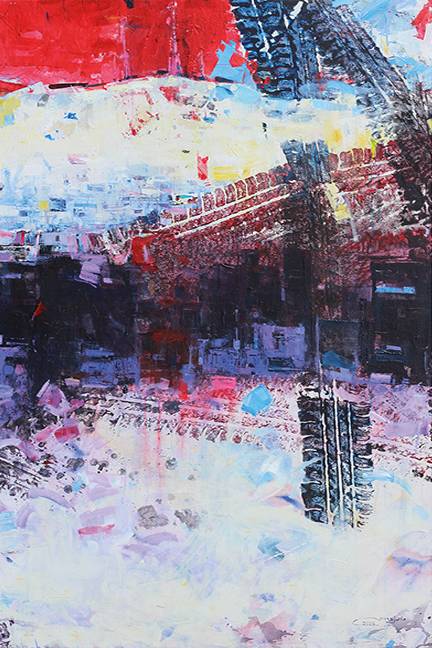 Tony explains that his art works, feature Syrian neighborhoods that were destroyed in the war in bright colors to show that despite the despair, there is hope, and a new day will come 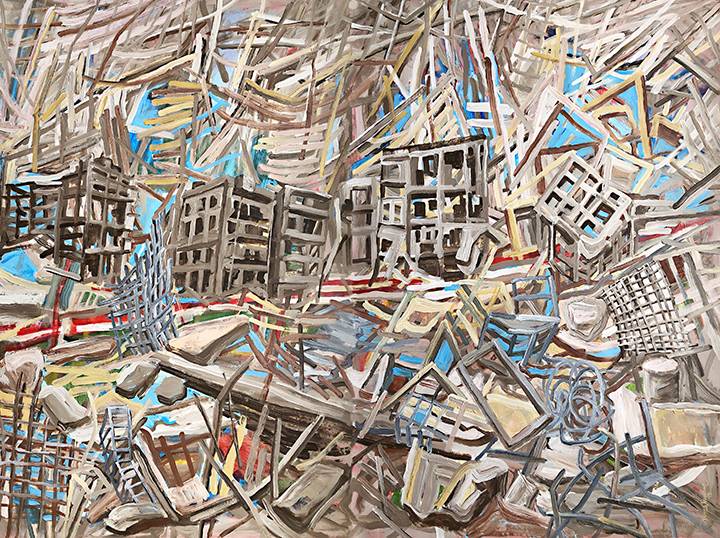 “My current work is about bringing the community together, and how the arts and culture are capable of connecting all communities from different cultures and backgrounds to create a dialogue”, says Tony about his initiative.

Tony, who says that he recently became a curator with this idea for a group exhibition showcasing the Syrian American and Syrian artists and connected with his artists friends from Syria, not only arranged an exhibition for these artists, but also held other Syrian cultural events in September 2020 and introduced the Syrian arts and culture to the public: “I wanted the American people to fully understand the Syrian and Middle Eastern culture, so I introduced virtual zoom and FB Live lectures about the Syrian-Lebanese community in the U.S. and their contributions to the United States since 1880 to the present time.

The initiative led by Syrian-American artist Tony Khawam, aimed at exhibiting Syrian art works, and creating a dialogue between Syrian and American communities by introducing the Syrian culture through traditional music and cuisine

Another Zoom events include “Middle Eastern Melodies” performance of Muwashshahat and Qudud Halabiya and Andalusia, a documentary film “The Arab Americans”, and the Syrian culinary talk with a food writer “What Syrian food can teach us about humanity” and highlighted how Syrian food brings the family, friends and neighbors together”, not only while dining, but also in the process of preparing the food”.

“For me, the heavy damage or destruction in some of the urban neighborhoods in Aleppo, was like knowing that one of my family members got sick, these places are family to me”, says Tony, and introducing the traditions of the city means resisting its destruction and evoking hope. “People don’t want to hear political news or hatred speech”, he adds, “humanities are what connect us all. By being together and building awareness, we contribute to the making of peace”.

The art works in the article are from "Emerging Art From War-Torn Syria: War and Hope" exhibit courtesy of Tony Khawam.

Are Egypt’s Street Artists Being Squeezed Out of the Public Sphere?

Abu Hurairah… A Copy of the Prophet, With a Cat Up His Sleeve