It is always difficult to lose someone dear, it is even more difficult when you lose them for what they do and what they believe in – leaving their relatives and colleagues in a state of permanent anger as they chart a route to freedom and justice.

We speak of journalists and bloggers, who lost their lives or freedom because they expressed their opinions, exposed corruption, called for freedom and democracy, or even for basic human rights which can benefit everyone.

In the Arab world, hundreds languish behind bars, simply because of a post they wrote on their social media accounts, or a newspaper article or investigation in which they challenged the authorities, provoking the ire of some official here or there – a fate that can end with death.

Over the past year, terrifying details have emerged of the murder of Saudi journalist Jamal Khashoggi in his country's embassy in Istanbul, simply because he possessed ideas and opinions that differed from those of the ruling family in the Kingdom, he published his ideas with Raseef22, and for that the publication will always feel honored and troubled.

In Saudi Arabia, Khashoggi was not the only one who paid the price for adopting different ideas and defending them: for there are dozens of religious leaders and scholars as well as activists who remain in jail, subjected to torture and facing trials which can end with sentences of execution or long imprisonment.

In this regards, a number of the families of those journalists and bloggers who paid and continue to pay the price for their journalistic work and message, as well as their political and social views, assembled along with German journalists in a seminar recently held in the Hertie School of Berlin, titled: "Freedom of the press in crisis in Europe and the Arab World."

Amongst the participants were the researcher and writer Hatice Cengiz, Khashoggi's fiancé, who leads campaigns seeking to uncover the details of the investigation into Khashoggi's death and achieve justice. She was joined by Matthew Caruana Galizia, an investigative journalist whose Maltese mother, Daphne Caruana Galizia – also a journalist – was killed in 2017 after unearthing major corruption files in the country.  Lina Alhathloul, a human rights activist known for calling for the release of her sister Loujain – who has been detained in Saudi Arabia for her women rights activism – was also on the panel. The last participant was the renowned German television reporter Frank Plasberg, who has presented a weekly political discussion show on German TV since 2001. 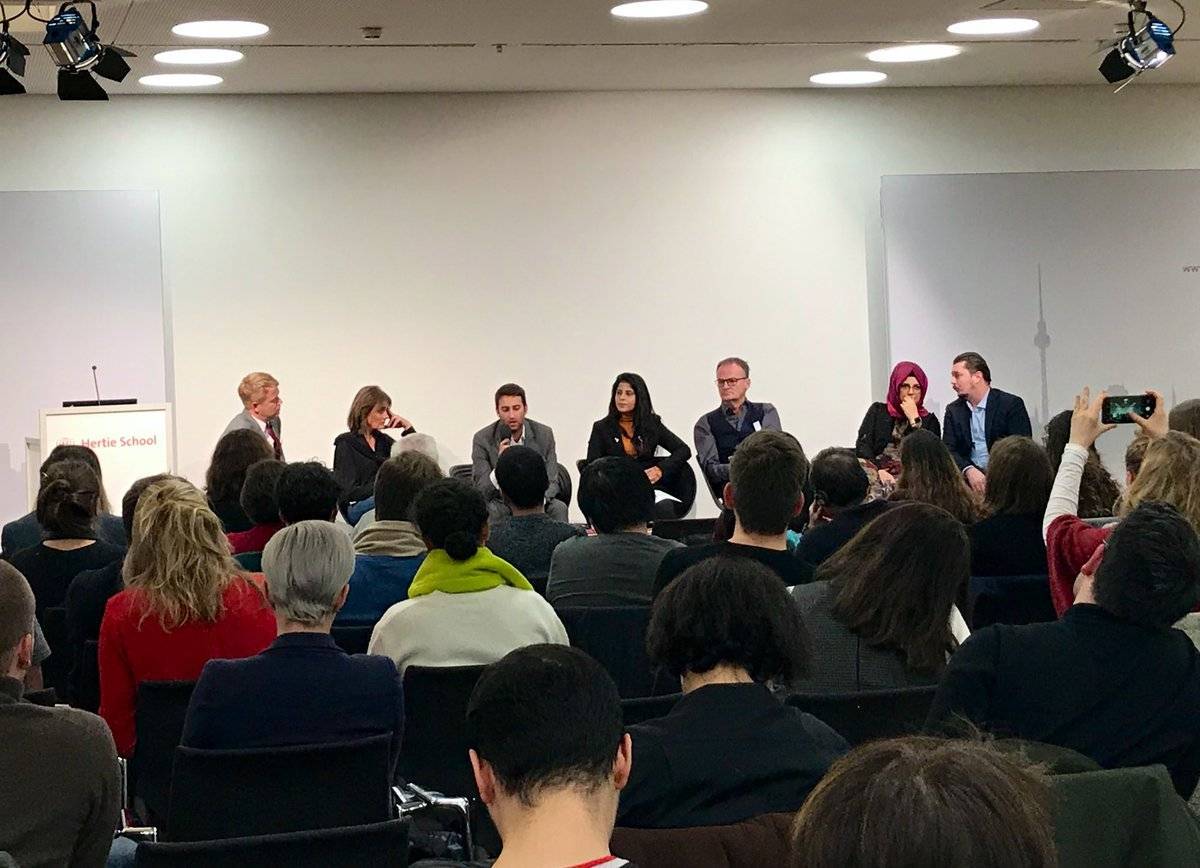 Freedom of expression in danger

What does freedom of expression mean for those who lost their loved ones as they fought repression?

During the event, Caruana Galizia remarked: "We live in a European country (Malta) full of corruption, and the role of journalists is to unveil this corruption; however, due to the absence of an environment of freedom of the press and expression in the country, my mother Daphne was the only one carrying out this work; she was left with a choice of either leaving Malta or for the corrupt to be brought to account, and so she did and so they killed her.”

He added: "We now need to make sure that no journalist who covers corruption issues is ever killed, this must stop immediately," adding: "My mother was right when she said that there were no red lines in Malta: yes, nothing prevented them from killing her."

Cengiz, #JamalKhashoggi's fiancee, participates in panels around the world to keep Jamal's memory alive and voice remembered now that the murder is fading, he was a symbol of human rights and press freedom in the Arab World. The Arab World loss is BIG

The release of prisoners of conscience in Saudi Arabia, like #LoujainAlHathlool which was the thing #JamalKhashoggi himself called for, would please Hatice Cengiz – for it was as if he was their voice; He was in pain because he could not help them.

Hatice Cengiz: "I hope #JamalKhashoggi's case remains a symbol so the world does not forget how journalists die for their opinion, and so the incident does not pass by like a fleeting case, and for his memory to remain for future generations."

Galizia explained: "I grew up as the son of a woman who spent thirty years of her life in journalism, who watched as her house was set on fire, as our dog got shot, and other things that obviously sought to target my mother's work in exposing corruption."

Meanwhile, journalist Katja Gloger pointed out that the freedom of expression indicators released annually by the organization "Reports Without Borders" is becoming bleaker every year, where reporters continue to be killed because of their work, a reality she described as "sad and frightening."

Meanwhile, while Frank Plasberg refused to compare the situation in Germany with other countries where journalists risk death, torture and imprisonment, he nonetheless declared: "We are also threatened through social media platforms, with this fake news that invades our work, and which poses a major challenge for us; thus I refuse to deal with any email, social media account or even guest on the show who does not want to openly reveal their identity."

Lina Alhathloul on the other hand said: "the situation in Saudi Arabia can be summarized as such: no one is able to give their opinion if it is not in line with the authorities’ official line; On a daily basis, there are arrests of anyone promoting ideas or information that the state does not want to be available in the public realm, there is currently no room to breathe."

It was difficult for Lina Althathloul to speak of the situation of her sister Loujain, who was arrested for calling for the end of male custodianship for Saudi women, as well for demanding the right of women to drive (she was arrested shortly before Saudi authorities finally gave that right), and ensure that they are able to travel and request the issuing of official documents without a male custodian being present.

Alhathloul said: "When Lujain was arrested, she was not charged for eight months, she was tortured in the first four months – however the family preferred to stay silent and not speak of the arrest, but we discovered that silence is not useful in these cases and with these regimes."

Loujain was then charged with terrorism, treason and collaborating with foreign agents; when her trial began, the charges were changed to focus on her feminist activism and call for women’s rights in Saudi Arabia, in addition to her work for the United Nations. Then we were surprised with the suspension of the trial in April 2019, and we do not know what her fate is now, for she has been in solitary confinement for several months, we are allowed to visit her once a month; she is also allowed one telephone call every week, but she is still shackled said her sister to Raseef22.

Hatice Cengiz, the fiancé of Saudi journalist Jamal Khashoggi, said: "Despite the start of the trial of those accused of killing Jamal, there is no transparency in the trials and I do not know what will be achieved; today I await the results of the Turkish investigation into the case in order to know the next steps we will take."

Cengiz has been participating in different panels and forums around the world to keep Khashoggi's memory alive now that the murder is fading in memories. She added: "My participation in all of these events, conferences and programs is to keep Jamal's voice alive and to keep his cause present in the consciousness of the world, as a symbol of human rights and freedom of the press in the Arab World and Middle East."

Matthew Caruana Galizia is following suit, leading a campaign aiming to achieve justice for his mother and unmask the party responsible for her assassination, stating: "I don't know if I can return to my work as a journalist after what happened to my mother, as the campaign for her justice takes up all of my time; I would like to return to journalism but not in this situation and under these conditions."

What Will Appease the Families?

Lina Althathloul's response to Raseef22's question was brief: "My sister's freedom is what will satisfy me."

This was a contrast to Hatice's response, who said: "There will be nothing that satisfies me, for Jamal will not return, and he was something huge to me, not only as a fiancé – for I believe that the Arab and Islamic worlds have lost something big in Jamal; there will be no person like him, and after this loss nothing will satisfy, reassure and comfort me. However, the release of prisoners of conscience in the Kingdom of Saudi Arabia, which was the thing Jamal himself called for, would please me – for it was as if he was their voice; he was in pain because he could not help them, even though he tried through his voice and pen to bring their cases to the attention of world public opinion, and this is why they killed him."

She adds: "I hope that Jamal's case remains as a symbol so that the world does not forget how journalists die because of their opinions, and so that the incident does not pass by like a fleeting case, and for this memory to remain for the future generations."

As for what would please Matthew Caruana Galizia, he responded: "Justice for my mother, and a fair investigation into her case. We need institutions that work with integrity and transparency and this is something that cannot be achieved while those persons responsible for my mother's death – and those concealing them – remain in power."

He continues: "People in Malta continue to protest in order to pressure the political authority, with the demand now being for the resignation of the prime minister, which I believe is a correct demand at this time, which if achieved will create a window and bigger opportunity for us than that we had before, through which we can change the future of our country."

Caruana Galizia concludes his conversation with Raseef22 by saying: "They killed my mother, who will not return to life; Malta languishes under a very corrupt regime, and we hope that Europe, as a political authority, can develop new forces which can serve as a guarantor to prevent the occurrence of these deficiencies that transform the entire country into a pit of corruption."