With the blessing of the Mountain Gods and in the presence of the Lama (Sherpa priest), Tima began the ascent from base camp to the summit of Mount Everest, at 8,848 meters above sea level, becoming the first Lebanese woman to climb Everest on 22 July. 2019.

Tima Deryan, 26, says the Puja ceremony is important to the Sherpa people who live in these mountains, it makes climbers feel warm and energetic. During this spiritual ritual, rice and flour are offered to the mountain gods, prayers are read over climbing tools to bless them and to placate the gods to allow climbers safe passage. Tima still wears the necklace that was given to her at the end of the Puja ceremony to remind her of her wonderful trip to Everest last May. 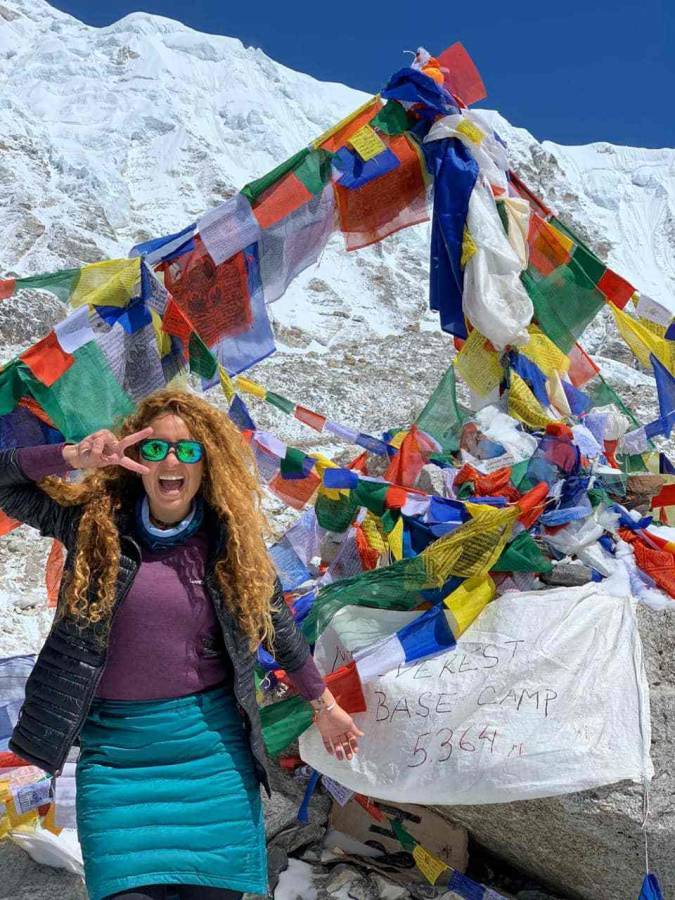 I’ll reach the summit one day

Mountain climbing as a hobby is uncommon in the Arab world in general, especially among women, because of the difficulty of pursuing it on one hand and social restrictions on Arab women on the other.

Tima took to the idea when she was quite young during her trips to Nepal as she was drawn to the sight of the great Himalayas. She told herself: "One day I will reach the summit," she said. But it remained just a notion in her head until she turned twenty-two when she began to actually plan her arduous and exciting journey.

Tima told Raseef22 about the first inklings of the idea: ``Four years ago, Reuters where I work hosted a motivational speaker who talked about his trip to Everest,'' This aroused this dormant childhood fantasy in her and she began researching what she needed to do in order to conquer the great summit.

Tima recounts "Climbing needs learning and experience. I started climbing about 18 mountains before taking on Everest to see how I would function on a mountain and my body's ability to withstand pressure and lack of oxygen."

After two months of climbing, TIma finally managed to reach the highest summit in the world where all the eye can see is the sky above your head and the mountain under your feet. ”On the summit, I was overcome by this wonderful feeling, after months of climbing fraught with difficulties but as soon as you ascend to the summit you don’t think a great deal, you look around you and there is nothing but sky beside you and the entire mountain beneath you.”

From entirely different places and with different stories, Tima, Worood and Khadija climbed Mt Everest. They challenged chauvinistic concepts in patriarchal societies. They made it, and they are proud to have planted their flags on top of the world

The toughest part of climbing Mt Everest, is having to step on frozen dead corpses of those who died in pursuit of the dream to reach the top of the world, but that was not going to stop 3 Arab women who take on fear like true Arab heros.

Tima pointed out that she encountered a lot of criticism for being a woman who climbs mountains and there were many attempts to deter her from pursuing her plans and dreams “When I climbed Denali summit in Alaska, everyone scoffed me because I was a woman and an Arab from the desert (she lives in the UAE) but I reached the summit before them and proved their perception was false'' she recalled. 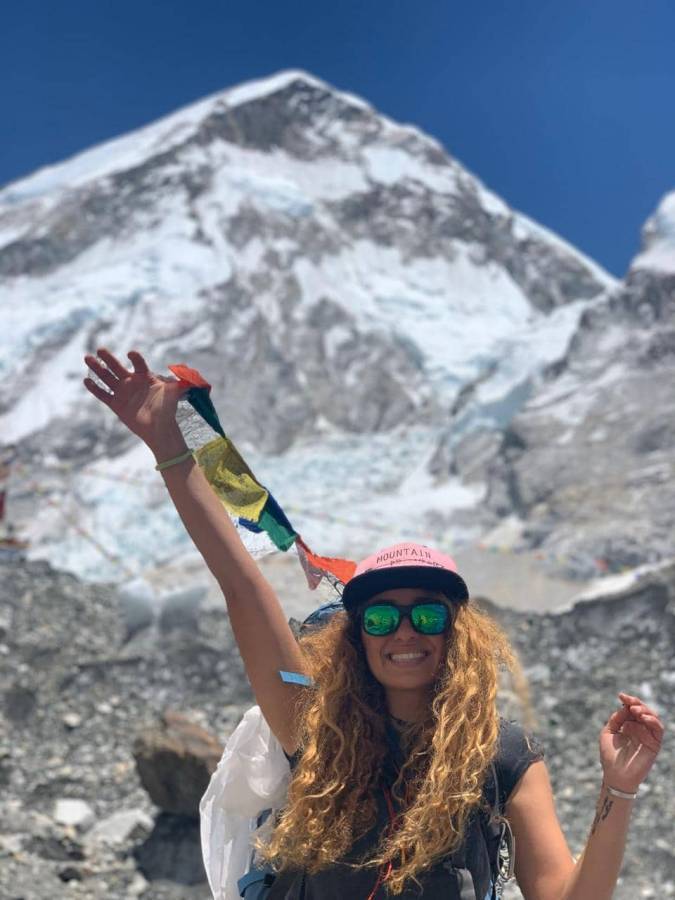 Tima, who was also the first Arab to climb the highest active volcano in the world Ojos del Salado, said "women, in general, have talent and drive, but as an Arab woman, it is difficult to flourish in Middle Eastern society, there are many people who try to impede, diminish and control you by shaming you.”

It is not enough to go beyond the geographical boundaries of your country, to discover that you were not living freely, as the great Indian sage Osho says. But sometimes people have to go beyond the psychological limits and social restrictions that seem impossible to break, which may be harder than trekking thousands of miles, says the Palestinian climbing enthusiast Worood Sharabati (25 years).

From Palestine’s valleys and foothills to the Everest base camp, which rises more than 5,300 meters above sea level, Worood has a unique experience of self-exploration and challenging the constraints that hindered her progress. 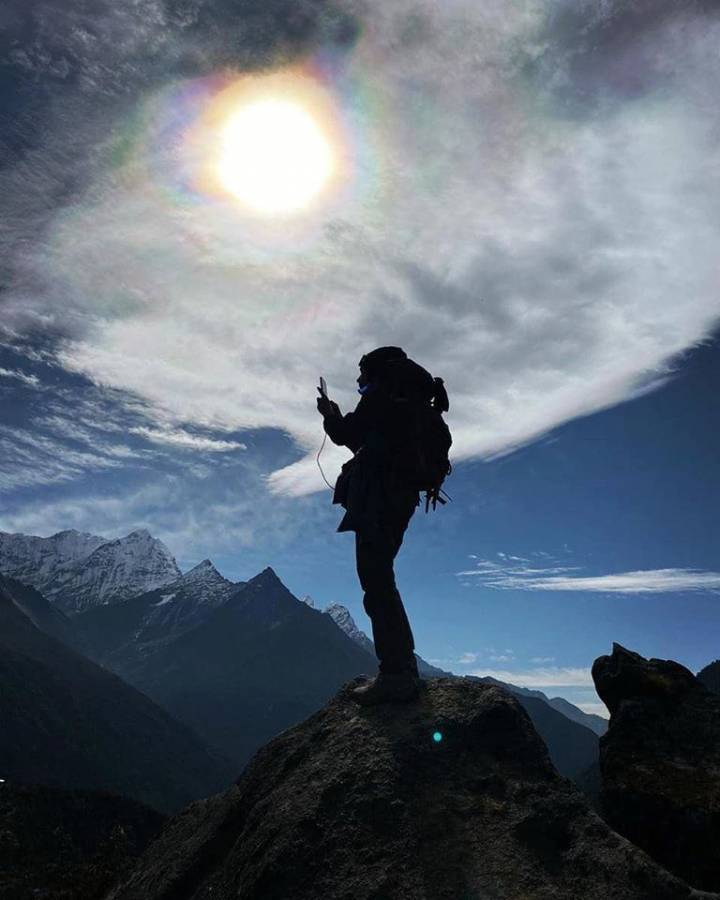 “Climbing Everest was my dream since I was five, but this trip happened by coincidence,” Worood told Raseef22. “Palestinian traveller Alaa Al-Juneidi offered me a chance to participate in a program to raise awareness about travelling and spread the culture of travel.”

It took two weeks to climb to Everest base camp, enduring sub-zero temperatures and lack of oxygen, but this is all forgotten the moment you see the sunrise above the base camp, said Worood.

"One thousand magnificent suns shine from behind the mountains," thus Worood described watching the sunrise from the highest summit in the world, a daybreak that is well worth the risks taken and the hard work to get up there. "I was overwhelmed with happiness and pride in achieving my dream, a challenge for me and to raise the Palestinian flag on this site."

She says that in climbing the base of Everest, she proved that a Palestinian who is facing obstacles in her daily life can achieve great things, adding that people must challenge themselves and not remain confined within psychological and physical boundaries, and be free from the boundaries set by themselves.

"As a girl in Hebron, I have faced criticism as well because I am doing something new in my society," she says but she is optimistic that people's increasing awareness of climbing may reduce such criticism in the future.

Uniting with the Earth

Emirati woman Khadija Turki, 43, started climbing as a hobby several years ago after taking part in a long trek of more than 100 kilometres in Spain.

This experience pushed her to pursue greater achievements by conquering the highest peaks in the world, first, the summit of Mount Kilimanjaro in Tanzania, the highest summit in the continent of Africa, and then the summit of Everest.

“The idea of ​​climbing Everest came in April 2018. I was taking part in a trip by a group of women from the GCC to the Everest base camp, I then went on to climb 8000 meter which is a little under the highest summit'' says Khadija.

On what Khadija learned from her new experience, she says that her arduous journey taught her to communicate with herself, revealing to her the extent to which man is connected to Mother Nature and that the whole universe is united in one way or another.

But the image of the bodies of the climbers who spent their journey to the top was the most difficult thing she had to endure during the trip, as she had to step over bodies submerged in the snow and continue climbing.

Many Everest climbers are killed by the low temperatures, lack of oxygen, and landslides and avalanches, making this summit one of the most dangerous places in the world.

However, this did not deter Turki from planning her next trip to reach the top of the summit and added that she has already begun training in running and climbing in preparation for her next adventure. 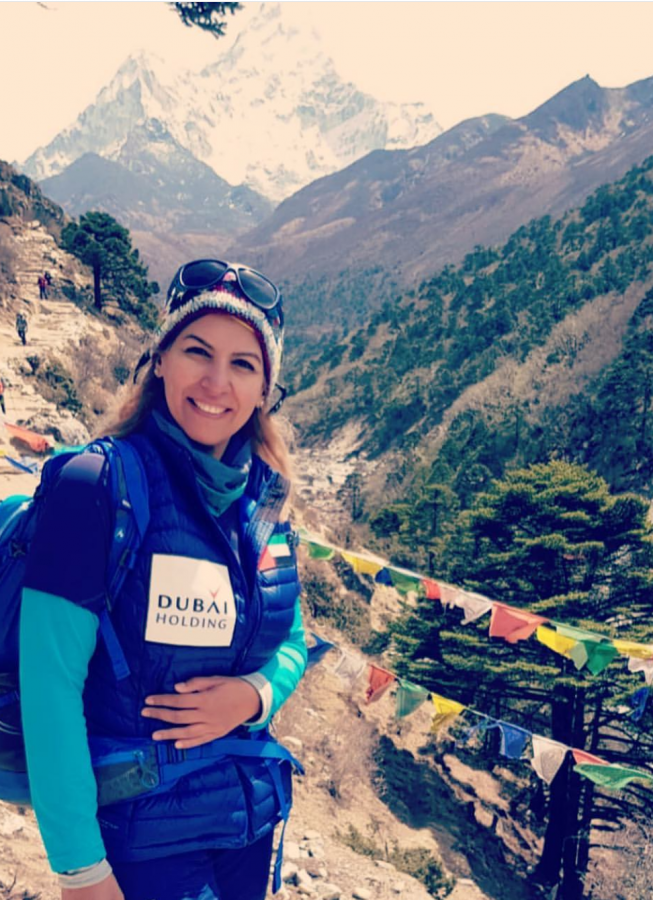