"I taste the city of Port Said as if I were getting to know it for the first time.." This is how Nemat Hassouna described her visit to the floating library, the "Logos Hope" ship, which had been anchored on the dock of the tourist port of Port Said since January 5, with its visit to the Egyptian coastal city coming to a close on the 22nd of the same month.

Nemat, a researcher at the Ministry of Administrative Development, lives in Ismailia, 80 kilometers south of Port Said. She tells Raseef22, "I used to visit Port Said to buy clothes on occasions, but this time I got to know the city in a new way."

When Nemat read the news that the Logos Hope ship, described as the largest floating library in the world, was about to arrive in Port Said about a month before it set sail, she began planning the visit, after her curiosity was aroused by the great publicity campaign that preceded the visit. "Because my visit to Port Said is a cultural visit this time, this is the first time I focus on the details of the streets and houses." 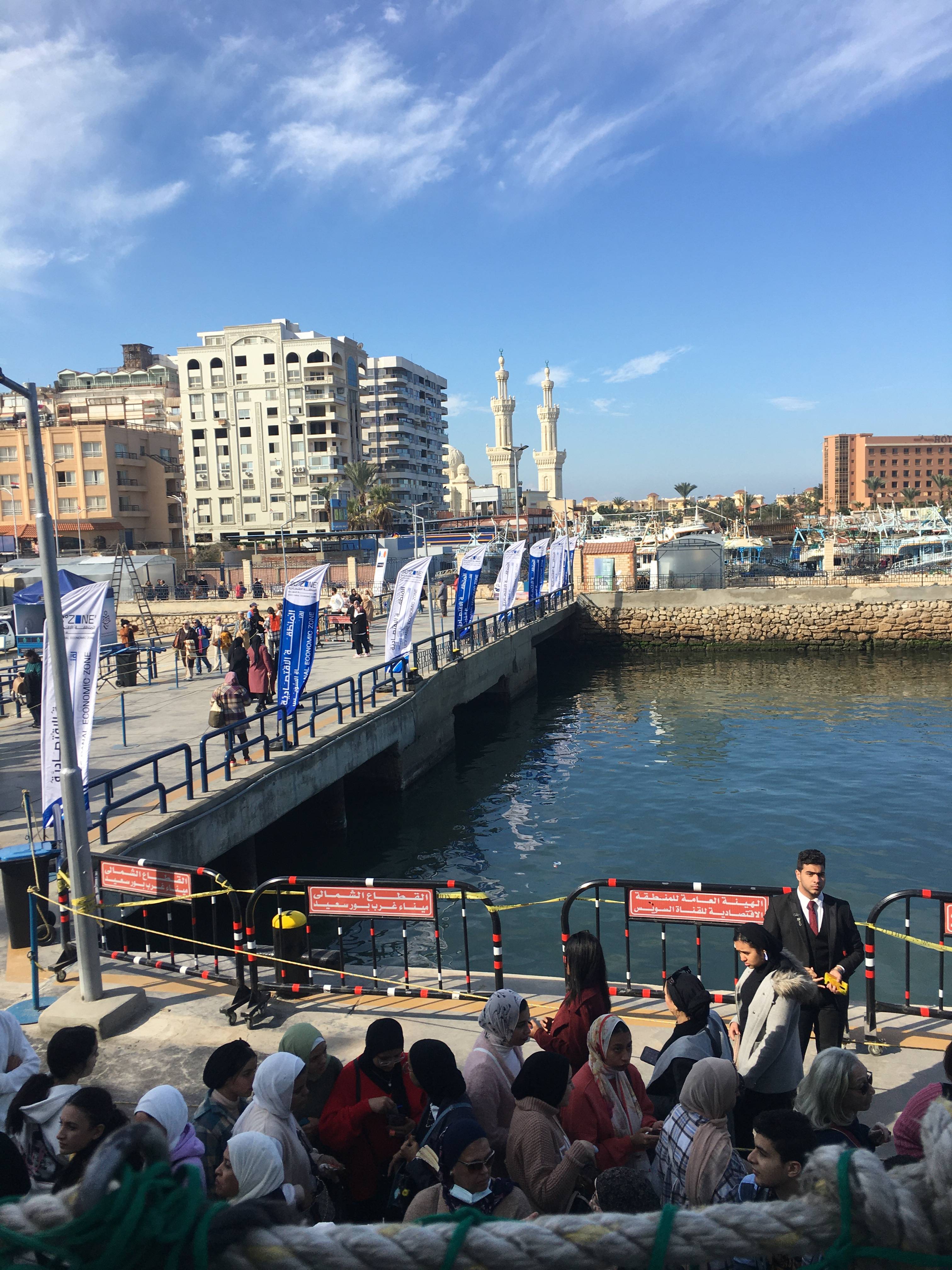 What is "Logos Hope"

The Logos Hope ship docked in Port Said port as part of its journey across the Mediterranean Sea, on its way to the Gulf of Aqaba, twelve years after its first passage through the Suez Canal.

Nemat visited Port Said many times to buy clothes and perfumes at reasonable prices, as the city is an open "free market", but she never paid attention to the architectural and historical heritage of the city before she came to visit the Logos Hope floating library

The floating exhibition includes a large collection of books that reach — according to the official website of the ship — up to more than 5,000 titles, with topics ranging from science, sports, cooking, arts, to medicine, dictionaries, and languages, in addition to some religious books. 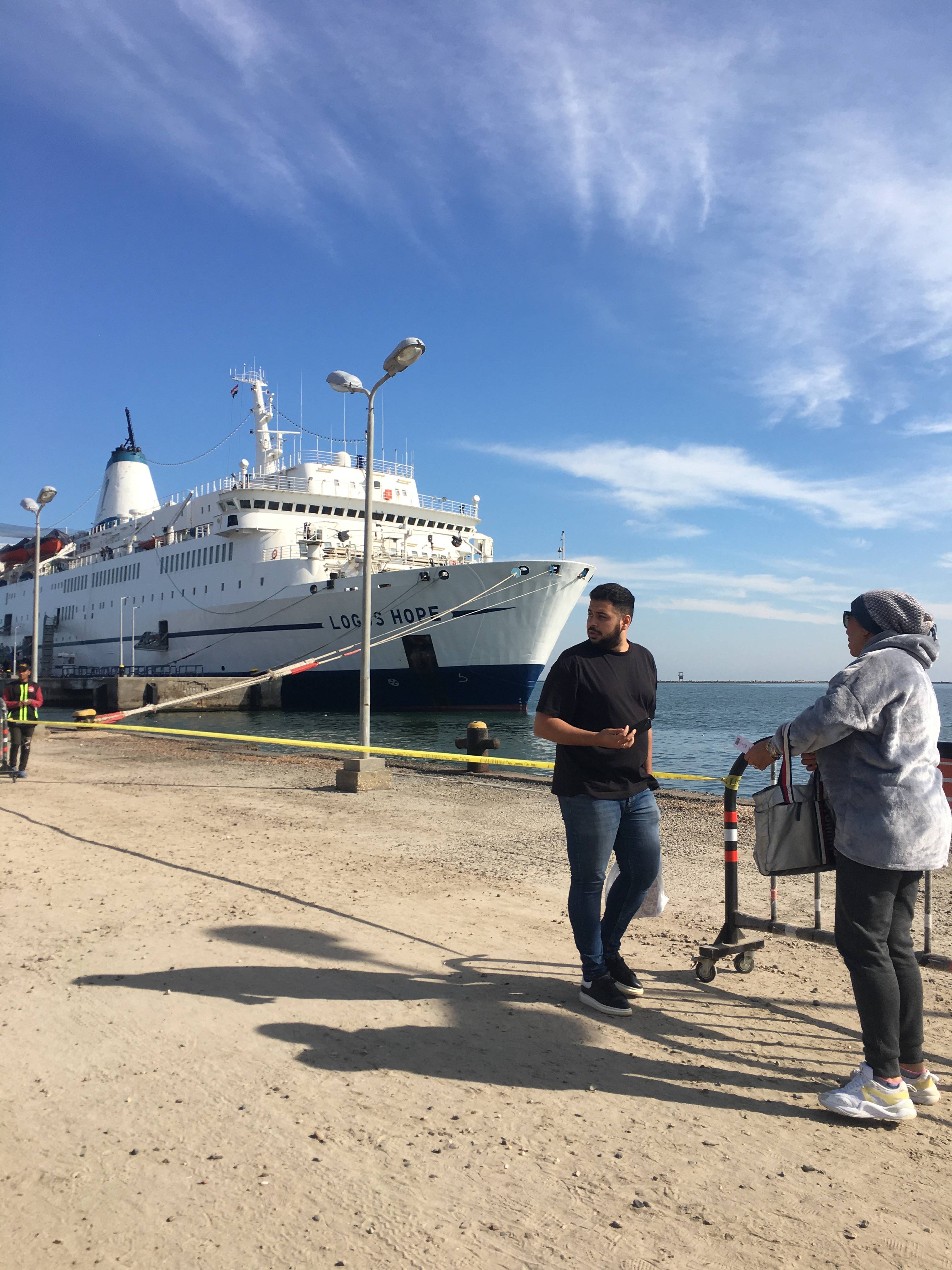 Logos Hope is the largest of two ships owned by GBA Ships, a Christian organization that relies on volunteering. It does not practice proselytizing activity directly, especially in countries that criminalize proselytizing to non-Christians, like Egypt. According to its stated mission, it is interested in spreading hope and preaching God's love for His creatures, hope in His justice and mercy, and hope in human solidarity in the ports where its two floating libraries dock.

Port Said welcomed tourist buses from the governorates of Cairo, Alexandria, Ismailia, and Suez to visit the floating ship, which represented an exceptional opportunity and tourist boom for Port Said, which is witnessing a demand in beach tourism in the summer, and New Year's celebrations in the winter, but suffers from a tourism slowdown during the rest of the months. 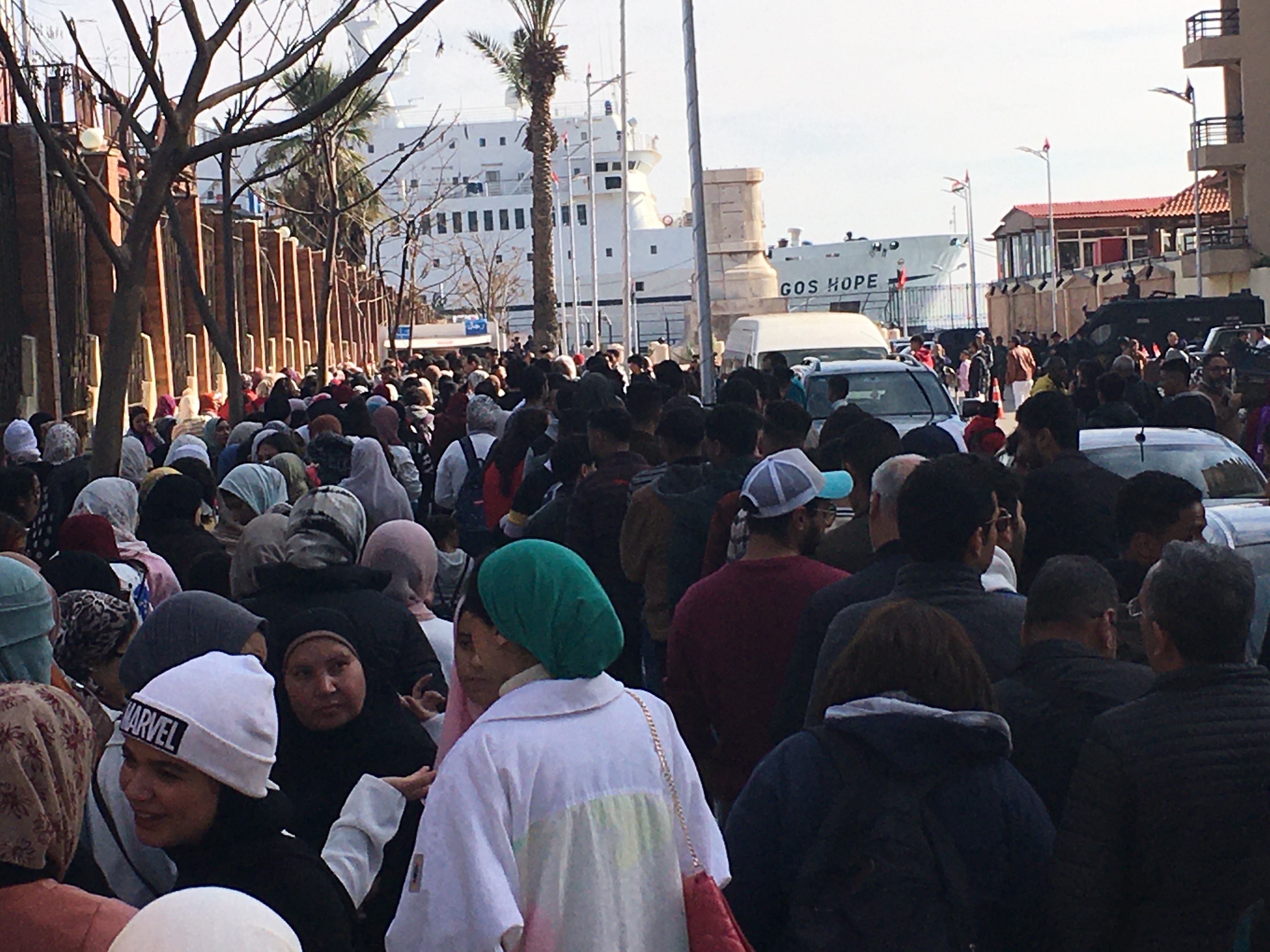 The Egyptian Tourist Authority – Port Said said in a statement, "We are preparing to promote tourist places and developed parks, especially the Port Fouad Salinas, Nasr Gardens, and the Feryal Garden."

Nemat, who saw the other hidden sides of Port Said aside from the discounted markets for clothes, shoes, and beauty products, considers the ship’s visit "a unique event". She says, “It is the first time I board a ship with a library, and even though I see ships passing through the Suez Canal in my city of Ismailia, it is the first time I board one, and the time set to visit the library is one hour. Then I made the rest of the day an opportunity to explore the city, making my visit to the ship a recreational trip."

Logos Hope is usually open to visitors from ten in the morning until ten in the evening, and the library's narrow space allows for the entry of approximately 300 people at a time. It allows visitors to move in one line without being able to go back to any area they had already passed.

Nemat adds, "I intended to buy books and thought that the ship would have a different set of international books, but I did not find what I imagined I’d find in international encyclopedias. I liked a number of self-development and geography books, but their prices made me content with buying some souvenirs from the ship. I compared what had been put on exhibit with what I could find at the Cairo Book Fair and preferred to wait for the fair, as the prices might be lower." 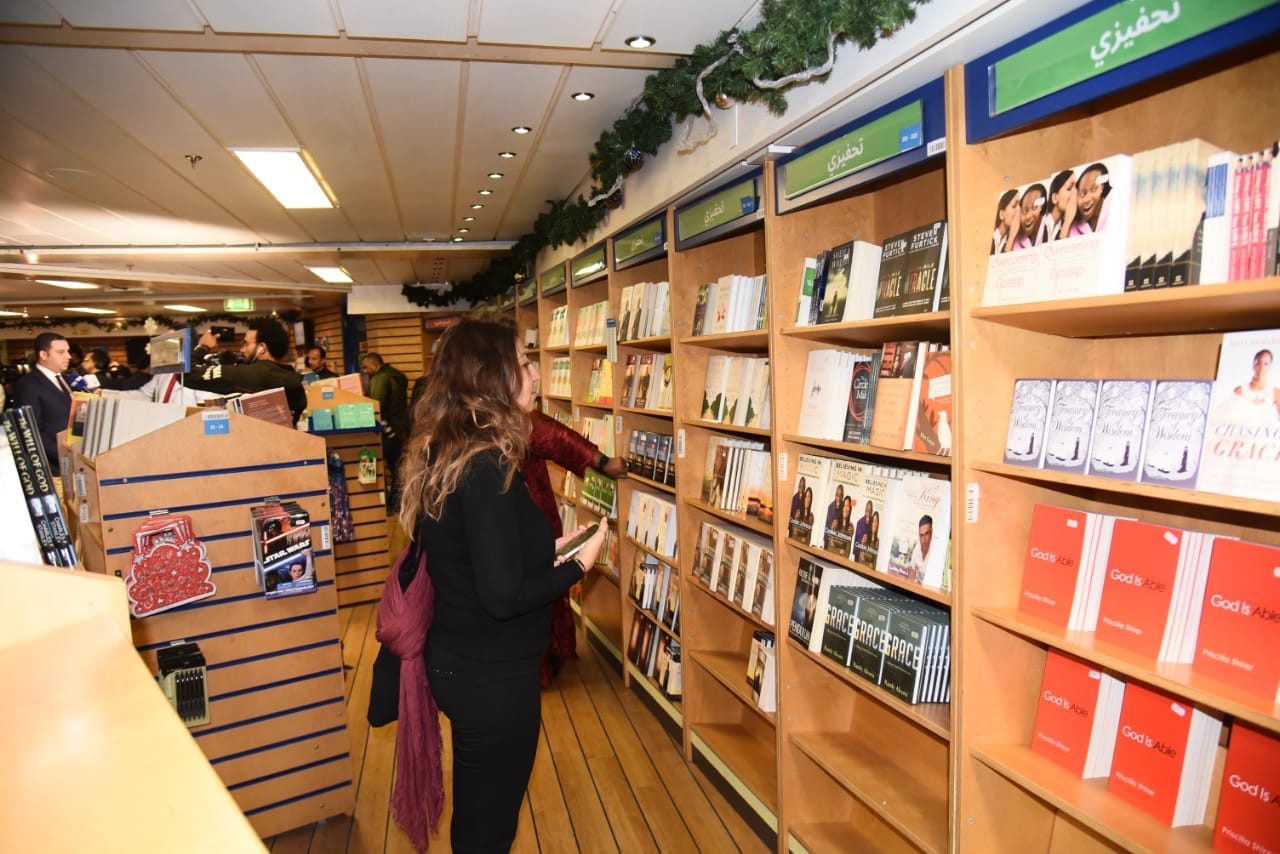 Dalal Abdel Mawgoud, a doctor who came to visit the ship from Cairo, agrees, "I liked a modern version of the World Atlas and wanted to buy it, but I backed down when I learned that it was priced at 540 pounds. The amount was too much for my budget."

This is the first time Dalal has boarded a ship, "It was an amazing experience, the crowd inside the ship's library made us move quickly and I bought simple books for my children in English." Dalal arrived in Port Said on a trip with the Heliopolis Library in the neighborhood she lives in inside Cairo. The trip cost her 180 pounds, and she went to visit the ship and spend the rest of the day in the city of Port Said and its suburbs. Dalal describes crossing the Suez Canal via the ferry as an "amazing experience, with the flocks of seagulls flying around the boats." 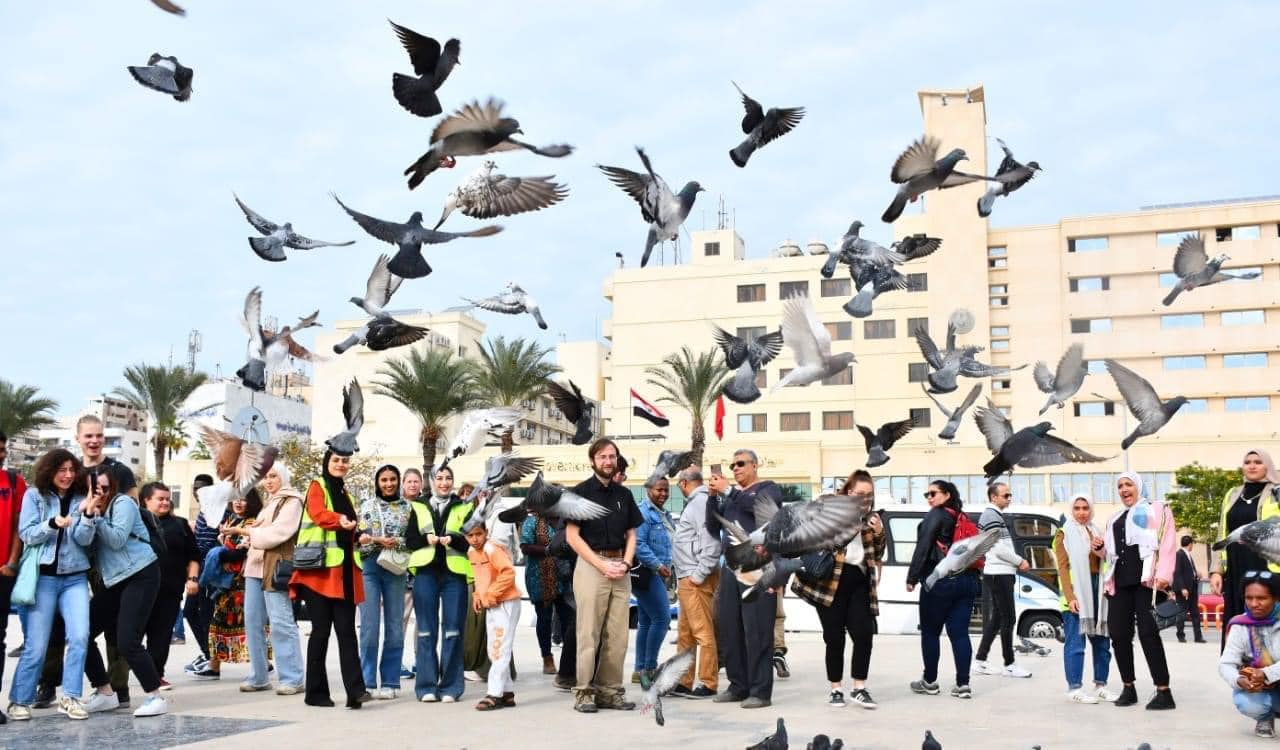 On board the ship, Abdullah Mohammed chose a chair in the middle of a sunroom overlooking the sea to read a small book he had bought. His spot, located in the waiting area and the ship's restaurant, allowed him to see the dock and nearby fishing boats.

“I had imagined that there would be an open space for reading on board the ship, and I had hoped that my son would have this experience to increase his attachment to reading, but the limited space of the ship and the visitors only being allowed to move in a circular route around the library dispelled this idea, so we settled for sitting in the restaurant by the window for a while,” Abdullah tells Raseef22.

"I didn’t buy a large amount of books because they were priced in dollars. This was an obstacle, and I compared them to the prices of similar childrens' books published by Nahdet Misr and the General Book Authority" — a visitor to the floating library

The limited time for the visit, which does not exceed one hour per person, was a frustrating limitation for Abdullah, who adds, "I had hoped that we would spend the whole day on tours on the ship, but I found out upon arrival that the visit period was an hour at most, and therefore I agreed with my son to turn the visit into a recreational tour on the ship and then go explore and get to know Port Said, which they were visiting with me for the first time."

Abdullah is surprised by the difference in the hype surrounding the ship's visit compared to the Cairo International Book Fair. Throughout last December, the young father was exposed to concentrated news and publicity about the imminent arrival of the ship and its schedule, which increased his enthusiasm to visit it, unlike the Cairo International Book Fair, which is held annually in the capital he lives in, and doesn’t receive the same publicity.

He continues, “I didn’t buy a large amount of books because they were priced in dollars. This was an obstacle, and I compared them to the prices of similar books for children in publications by Nahdet Misr and the General Book Authority publishing homes”.

Recreational trips in Port Said became part of the ship's program on Sundays, and the Egyptian Tourist Authority – Port Said organized a tour for the sailors and volunteers of the ship to tour the streets of the city by visiting the city's churches, its oldest mosques. and its salt mountains. While the team of volunteers that came with the ship carried out clean-up campaigns to clear the dock and the street opposite it, a volunteer on the ship said that it is a normal procedure that the team does in every port they visit, according to local newspapers.