On a cold October night, Sofian Nasser found himself stuck on a small rubber dinghy in pitch black darkness.

The 23-year-old Palestinian spent three hours with 20 others in the cold waters of the eastern Mediterranean, his temporary blindness accentuated by the crashing of the waves against the boat, hopefully bearing them to a better life.

Nasser is from the northern Gaza Strip, and is one of thousands of young men who have attempted to flee to Europe from the Palestinian territories in recent years - fleeing the war and economic and political troubles the densely-populated territory has been subject to for more than a decade by the Israeli occupation and siege and internal Palestinian divisions.

On the October 17, Nasser would finally arrive at the terminus of their sea journey, which began from the Turkish city of Izmir and ended on a Greek island, and would be punctuated by horror and tragedy.

“Greek police immediately arrested us the moment we approached their boats, and led us to a refugee camp on the island of Leros,” Nasser told Raseef22.

Nasser said that racism and intimidation are par for the course on the Greek islands, adding that police often turn a blind eye to such abuses. Refugee sanctuaries consist only of tents made of cloth to house the displaced, with seemingly little regard for children, women or the sick who live in abject conditions with no relief – whether in the scorching heat of the summer or the biting cold of the winter. 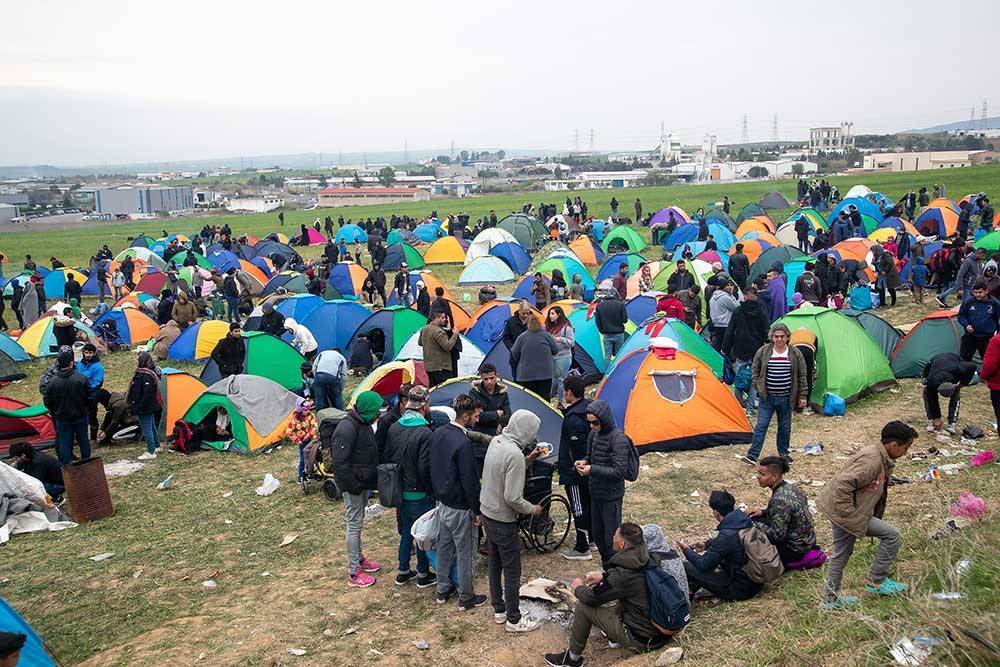 He said the inhabitants are routinely taken by surprise by Greek police raids on the tents of the camp, as well as assaults on migrants while they are sleeping, which have repeatedly led to injuries and incidents of hospitalisation.

While the Gazan refugees currently detained in Greece often send back photos to their besieged families back home – comforting them that they are ‘well’ and better than before – such an image conceals much of their actual reality. According to Nasser: “Many guys attempted suicide more than once to express their refusal of what they were going through”.

Such individual testimonies have furthermore been corroborated by reports by human rights orgsanisations, such as that of Amnesty International, which declared that thousands of refugees are currently stuck on the Greek islands and live in horrific and extremely arduous circumstances. The renowned human rights body also added that many refugee women have been subject to verbal harassment in the camps, as well as sexual and identity-based violence – while pointing to various incidents of migrant deaths that have not been investigated by authorities.

Yazid Adham, 28, recounted a similar story to that of Nasser. The same circumstances in Gaza pushed him to pursue the route of illegal migration in May 2017, proceeding from the Rafah border crossing to Cairo where he said he paid thousands of US Dollars to coordinate his eventual crossing into Europe. Adham would get on a plane for the first time from Cairo airport to Turkey, where he would wait an entire month to be contacted by the smuggler he had previously agreed with to transport him from the shores of Izmir to the Greek Islands for a sum of €1,500 Euros.

Onboard a similar inflatable dinghy lacking any safety equipment and unequipped to deal with any challenges at sea, Adham’s journey along with 33 others began. A quarter of the way into the trip however, Adham and his fellow travellers would encounter another boat waiting in the middle of the sea, and were subsequently “surprised by the smuggler telling us that his role here was done,” he told Raseef22.

Recalling the feeling of their utter abandonment, Adham said: “I felt that my life was over, for most of those on the boat are Syrian and Yemeni women and children, in addition to eight guys from Gaza.”

But he said the tears of those around him spurred him to “gather all my psychological strength and asked for help from some of them, and we re-started the engine and continued the journey.”

The refugees would survive and the boat would eventually enter Greek territorial waters, where they were intercepted by coast guard. They were subsequently taken to the island ‘camp’ designated by the authorities for illegal migrants, where they were then received by the Greek Border Guard who conducted preliminary investigations on their reasons for seeking refuge there, before offering four cloth tents for them to live in. 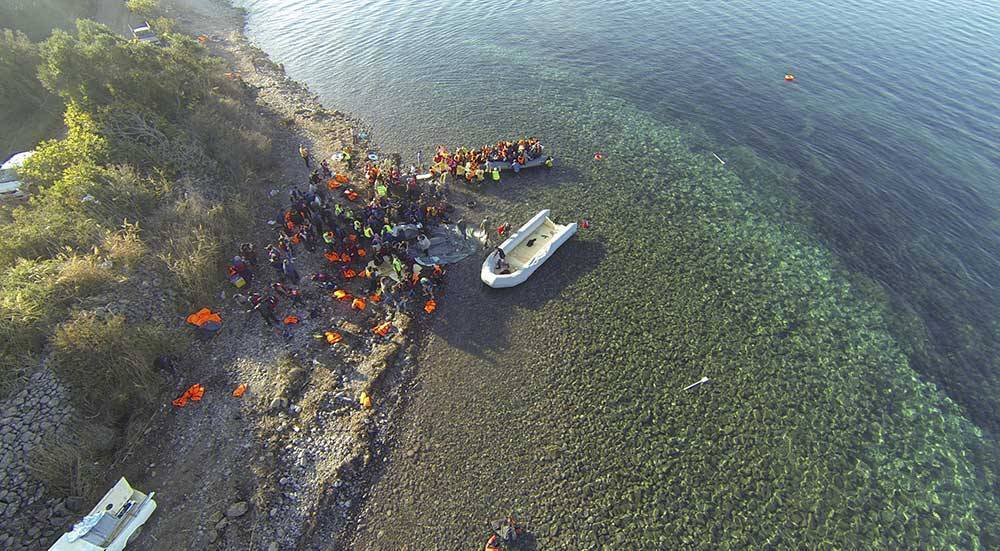 On their life on the island camp, Adham said: “Life here is not easy, and the details are agonising. We ran away from death and ended up in hell. We spend long hours waiting for a meal, and are sometimes informed by police that the food had run out and they were unable to get more.”

He added: “Even if we did get a meal, in the best case it is a handful of salt and dry bread, or some canned food.” According to Adham, more than 1,700 residents now live in an island only meant to absorb 500.

Perhaps such realities are not fully known to Gaza’s inhabitants, or perhaps they are but such a fate is nevertheless considered better than that which they already suffer. According to a 2018 public survey conducted by the Center for Studies and Measurement of Public Opinion in Al-Aqsa University in Gaza, more than 52% of Gazan youth prefer to migrate due to a mixture of political and economic factors. Up to 61% of Gaza’s youth are unemployed, according to the Palestinian Central Bureau for Statistics (PCBS).

Not all Palestinian refugees and migrants manage to evade Turkish security forces, however, as in the case of Iyad Samer, a 32-year old from Gaza.

Samer took the decision to migrate to Greece along with three friends in early 2018, and were able to eventually reach Istanbul, where they spent a week contacting smugglers of various nationalities in an attempt to find the lowest price for the journey to the Greek islands.

Eventually, the four young Gazans were able to reach an agreement with a Pakistani smuggler via WhatsApp, whereby they would pay €5,000 Euros in order to board an inflatable rubber dinghy.

Iyad said: “He [the smuggler] told us that the date of the journey would be the February 14, 2019, and indeed us four arrived on time at the agreed location, only to be surprised with a raid by Turkish security forces, who arrested some of those present including myself and one of my friends, while the others were able to escape.”

He added: “We were arrested for a period of 15 days in Turkish prisons, before being deported to Cairo and from there to Gaza once again. My two other friends meanwhile succeeded in a second illegal migration attempt and were able to reach the Greek islands in early April.”

Samer was particularly dejected over the fact that his family’s fundraising efforts on his behalf were in vain – they had taken loans from their relatives in order to raise the necessary funds for his travel, in the hope that their son would reach his goal and a safe shore on which he can lead a better life and from which he could help them. Iyad said that he personally lost US$2,000 in the failed attempt.

In 2016, the European Union (EU) reached an agreement with Turkey to tighten its border procedures in exchange for financial aid to help Ankara support the refugees it hosts on its territory. As a result, more than 265,000 illegal migrants have been detained in Turkey in 2018, according to the Turkish Interior Ministry.

Such a clampdown has not, however, ended the stories of tragedy and death in the waters of the Mediterranean. Reports of the drowning of Palestinian migrants surface from time to time, with the latest case perhaps being that of Hossam Abu Sido, 23, from central Gaza.

Abu Sido died three months ago near the shores of the Greek island of Farmakonisi. According to his family’s testimony to Raseef22, the boat captain had forced Abu Sido and those with him (of various nationalities) to disembark and continue the journey swimming, which would lead to his drowning as well as that of others.

Raseef22 was able to reach an Iraqi smuggler, who requested that only his initials A.H. be used, and who is currently residing in Turkey. The smuggler surfs the pages of Facebook to find groups of potential migrants, putting forward what he describes as competitive offers in terms of both prices and safety.

The services he offers, A.H. said, are restricted however only to the provision of an inflatable dinghy and accompanying the refugees half-way through their journey – after which he returns on another boat to Turkish shores, leaving the migrants alone to face the remaining route and the sea’s dangers.

He said: “In the past few years, Turkish authorities have started to intensify their pursuit of us as smugglers, and our work is now done secretly after having once been carried out in public squares in Istanbul, in plain sight of the police.”

The sum the smuggler extracts from each traveller to board his boat is a minimum of 1,500 Euros, he says, while a ‘group offer’ discount takes the cost down to 1,000 Euros per person. He said that smugglers in Turkey are part of a wider global network.

“I have representatives who organise smuggling trips from Algeria and other African countries,” he added.

A.H. said that Gazans are given special priority to enter the country by the Turkish government, making Turkey the best route to Europe for their eventual European asylum applications. Indeed, more than 700 young men have left Gaza towards Europe during the past three years, he said.

Qais Hamad is a Palestinian activist in the Jafra Foundation for Relief and Youth Development, and currently resides in Athens. According to Hamad, Palestinian migrants who have been able to enter Greece face extremely difficult circumstances. 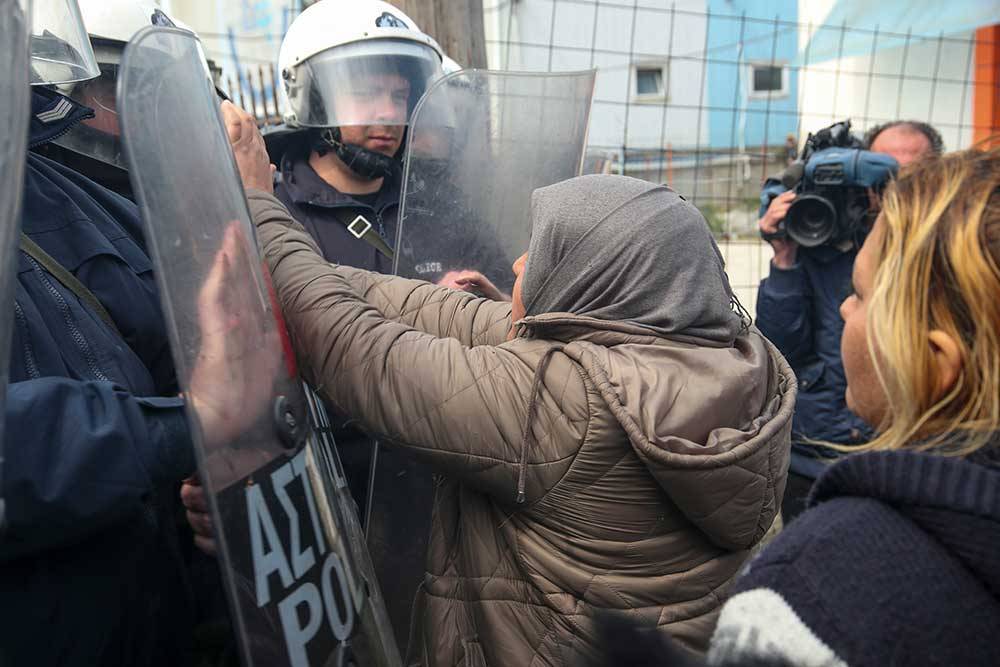 “For example, the Morea camp has transformed into a prison that refugees never leave except if they get police permission,” he said.

This imprisonment, Hamad said, can extend to an entire year, with refugees “detained sometimes for long months, subject to harsh interrogations only so that they know the reasons for their asylum.”

Hamad also said that Greek authorities have, for a while now, been deporting many refugees to Turkey. Dozens of those have drowned undetected in international waters, though he reserves a share of the blame to cases of fraud and deceit practiced by smugglers and middlemen.

However, such events have not been met with silence. Hamad said that many Palestinian youth, along with migrants of various other nationalities, with the support of civil society groups and human rights’ bodies, have repeatedly expressed their rejection of the practices they have been subjected to.

Such demonstrations were notably evident in a number of sit-ins which were met by repression from Greek security forces, though not before the protesters had their chance to make their voice heard, chanting against beatings, violence and the violation of their rights.

How my grandmother, who was evicted from her village in 1948, returned to it in a coffin

Between a rock and resistance: how Hamas crushes dissent in Gaza

Lebanon’s Public Prosecutor: The absolute ruler and enabler of the system