"A major disease needs a major treatment," Abdel Mahmoud Omar, a prominent Sudanese civil servant, borrows this phrase from the novel "The Feast of the Goat" by Peruvian novelist Mario Vargas Llosa, as an introduction to his comments on the conditions that Sudan has been going through since the military coup on October 25, 2021 led by al-Burhan, who still has not been able to name a prime minister and appoint a government.

A year has passed, Omar adds, and Sudan is testing its ability to survive as a state, while chaos pervades it at every level: political volatility and a comprehensive security, economic, and social collapse, as the chaos of artificial tribal conflicts orchestrated by military and political elites strikes its parts from east to west, and from north to south. This all comes as the people struggle to survive due to the halt of production, the rise in prices of basic commodities, their scarcity, the spread of poverty and insecurity, the prevalence of fear, and the spread of armed looting gangs, locally known as "9 Tawila" gangs, within the neighborhoods of large cities, in addition to the presence of five parallel armies affiliated with the armed rebel movements that have made a peace agreement with the government in Juba, the capital of South Sudan, on October 2019, not to mention the Rapid Support Forces (RSF) led by al-Burhan's deputy, Mohamed Hamdan "Hemeti" Dagalo.

"The political parties that were part of al-Bashir's regime, even if they played the role of the opposition, rushed to negotiate with the military components in hopes of taking over the scene and controlling it, and were overthrown for a cheap price"

To spite the civil movement

It is true that army commander Abdel Fattah al-Burhan and his deputy Hemeti managed to oust civilians from the transitional government, but a year after their coup — which falls on October 25 — they have been unable to win the street, which is moving in a completely opposite direction to them. They also have not even been able to form a government from supporters of their coup and the remnants of the former regime that include members of the Muslim Brotherhood who support the coup leader. He had brought the party back to power out of spite of the civil revolutionary movement, which is demanding a liberal democratic system and the return of the military to their barracks so that they can exercise their primary function in maintaining security and order, providing for the homeland, and protecting its borders.

In this regard, researcher and professor of political science Hamid Noreen reads the current scene in Sudan, starting with the fall of the regime of ousted President Omar al-Bashir in April 2019, and him being replaced by the Transitional Military Council (TMC), where the latter appeared to be loyal to the former regime or to an extension of it, and at the same time appeared in a state of extreme weakness in front of the mass crowds that imposed their full control over the capital Khartoum and the streets surrounding the army's general command, including the horrific incident known as the June 3 Massacre in 2019, when armed units, with great backing and support by the Rapid Support Militia, attacked unarmed protesters staging a peaceful sit-in in front of the army headquarters with heavy and light weapons, batons and tear gas to disperse democracy and the civil state supporters. This resulted in the death of over 100 demonstrators, with hundreds more wounded and missing, which precipitated a political settlement between those who had killed the demonstrators (the Transitional Military Council), according to Noreen, and the Forces of Freedom and Change (FFC). The two parties signed a constitutional document with international and regional presence on August 17, 2019, stipulating that the transitional power will be shared between the two parties. 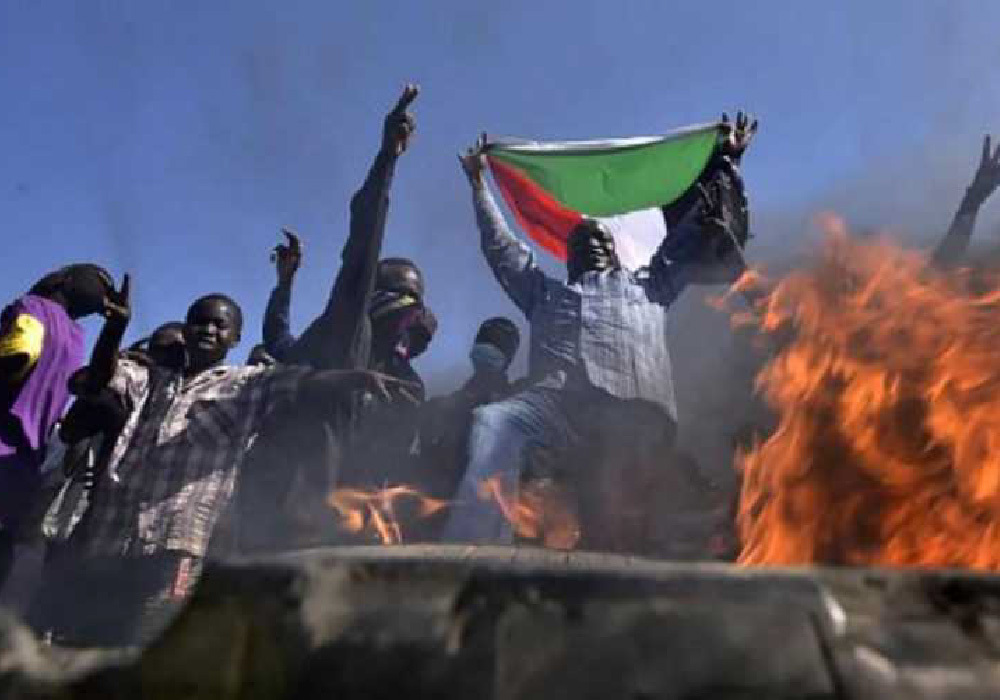 Noreen tells Raseef22, "The government of Abdalla Hamdok, which took charge on August 21, 2019, was a deformed offspring of that partnership. So just two years later, the army commander hurried to get rid of it and arrest its members, including the prime minister, before releasing them under pressure from the street and the international community. Since then, the coup has been unable to declare an alternative government, and has led the country — just a year after seizing power — to the brink of the abyss, where the security, health, and educational system collapsed, and the country's resources were squandered in offering bribes and buying off tribal leaders and the sheikhs of Sufi orders, who are mobilizing their followers and affiliates to create a parallel street and make it look like it supports the coup. Because of these policies adopted by the coup, separatist voices have risen in the north, east, and west, and so Sudan seems to be going to be torn into fragile states of a tribal and regional character."

The military, who turned against the Sudanese dream of a unified, free homeland, has failed to preserve the country's fragile unity or offer alternative gains. The situation, three years after the revolution and one after the coup, is now worse than everyone's nightmares

Three decades of authoritarian theocratic rule, followed by a massive popular revolution that brought about a dramatic shift in the political system and a great rift in the values and social relations inherited from that era — which, because of their consecration and consolidation in society through the educational system, official media, the pulpits of mosque, and force majeure, became something akin to conservative moral rules — all became difficult to overcome or easily move away from their foundations. The most important of these are the religious and tribal discourses that have taken root deep in society, making the process of change slow, faltering, and subject to settlement and displacement — as what happened after the June 3 massacre (that took place during the dispersal of a peaceful sit-in) in 2019, where power-hungry political parties rushed to a settlement with the former regime, represented by the military council consisting of officers who were original members of the Muslim Brotherhood regime and the security committee of deposed President Omar al-Bashir, headed by Abdel Fattah al-Burhan and Mohamed Hamdan Dagalo, popularly known as "Hemeti". "This took place before the blood of the martyrs of the revolution had even dried up, all sold for a cheap price," according to Amani Atta, a political scientist who spoke to Raseef22 from her residence in Cairo. 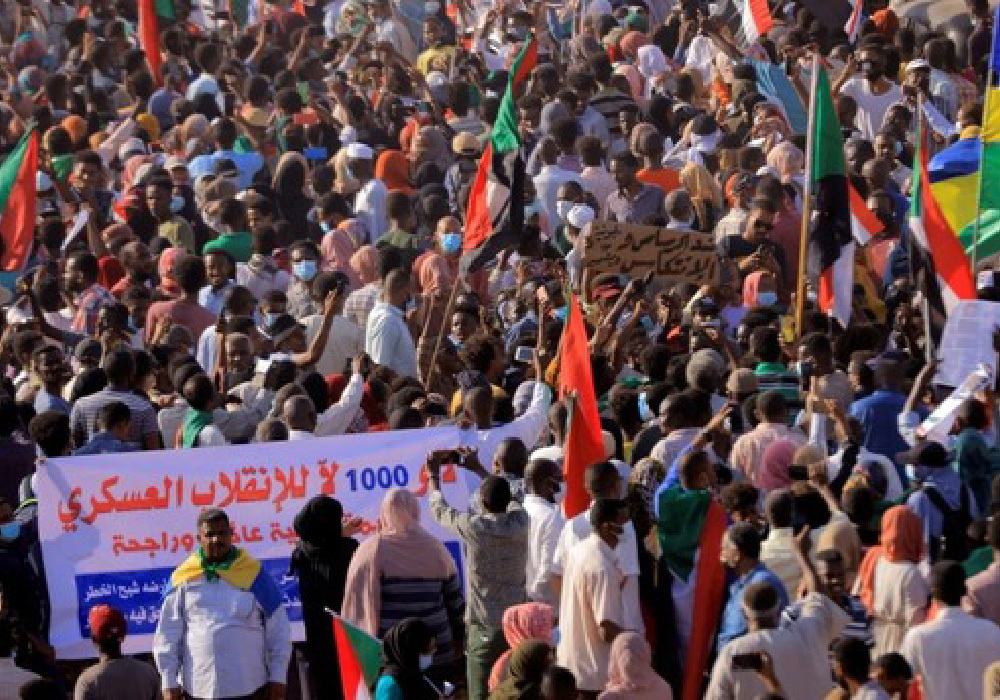 Migration to the North

In this context, Atta refers to information she describes as verified and reliable, that about 2 million Sudanese so far have settled in Egypt since the October 25 coup to escape the deplorable conditions in their country, in addition to 600 thousand students who have enrolled in Egyptian universities just in the current academic year, whereas the total number of students enrolled in Egyptian universities during the past ten years did not reach this number, which she describes as extremely alarming.

Atta tells Raseef22 about what she called an organized mass migration of middle-class Sudanese families to Egypt, seeking education, treatment, security, and water, electricity and gas services, which are barely available in Sudan. In this context, she refers to a report issued by the United Nations in March 2022, in which the UN envoy to Sudan, Volker Perthes, warned of an imminent economic and security collapse for Sudan, calling for help for the Sudanese to overcome the obstacles of the transitional period, and stating that time is not on Sudan's side.

Around 2 million Sudanese so far have settled in Egypt since the October 25 coup to escape the deplorable conditions in their country, in addition to 600 thousand students who have enrolled in Egyptian universities just in the current academic year alone

"This is exactly what raises concern and prompts citizens who are able to migrate or plan for it", Atta argues once again that in the absence of a political solution to the crisis, security conditions have worsened across the country, with crime and chaos escalating in geometric progression, and tribal conflicts intensifying in Darfur, eastern Sudan, and south of the Blue Nile, resulting in ethnically motivated killings, the looting and burning of assets and property, and the displacement of some groups from their villages. All this comes in addition to the accumulation of former rebel groups with their weapons, equipment, and numbers in the capital and major cities, along with the armed forces and the Rapid Support Militia, waiting to see who would light the fuse first to ignite a war of a regional and tribal nature that does not stop or leave anyone behind. Sudan’s slide into conflict, divisions, and civil war — like in Libya or Yemen — has become a looming reality that everyone is nervously waiting for, as if it were an unavoidable and inevitable fate.

Why are Sudan’s student protesters so brave?

‘Turning back is no longer possible’: a primer on Sudan’s protests

Shocking figures: Sudan pushing a third of its children into illiteracy

Getting a gastric sleeve.. When societal pressure places us under the scalpel