I am always asked this question. Why did I go into this craft? Why am I so in love with the human body?

I began my body painting endeavor when I was studying at the Faculty of Fine Arts in Cairo in the year 2000. At the time, I thought I was in love with the details of the human body; such as the anatomy, the muscles, the colors, the types of skin, the ability to move or stand still, and other captivating details that these unfamiliar worlds uncover. But with age I realized that what I really fell in love with is the interaction that takes place between people, and between me and them when they become the piece of art itself instead of being on the receiving end of art. 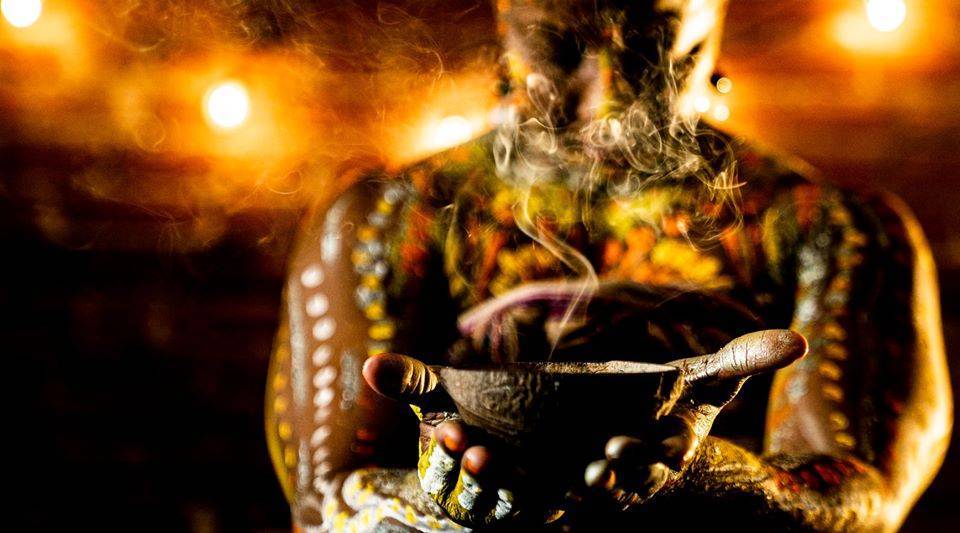 Painting on the body was, and still is practiced in many forms and in more than one civilization, especially ancient African-Egyptian civilizations. Many of these drawings have religious origins and carry amazing ritual connotations, such as tattoos that were made by incisions in the skin and facial markings that portray feelings of pride or identify your tribe and your status in it, or even those that were seen as beauty marks.

There are those that are done with a purely aesthetic goal in mind, and do not carry any other meanings or connotation (beauty for the sake of beauty), which is what crowned the East in this domain for its use of henna. But in the end, regardless of its history and motives, the idea of body ​​​​painting in many civilizations can be summarized as using the skin to create the clothing that is worn by the soul. 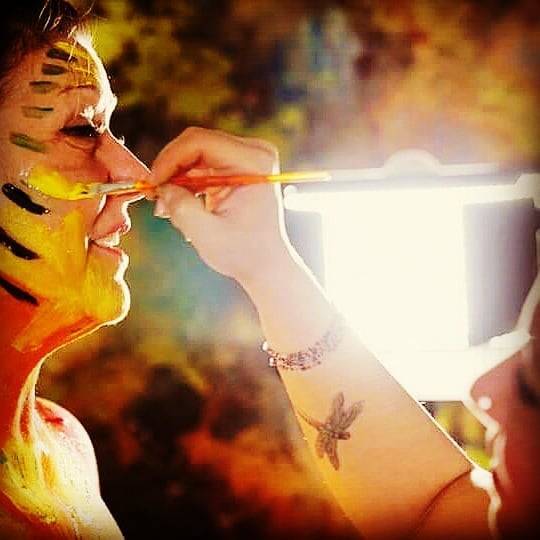 It was an enchanting journey from the very beginning, and although I practiced this art in three countries — Egypt, the UAE, and Canada, which is where I am now — I rarely met any people who practice it as a craft, this craft that connects the body and the soul. This craft that is based on the belief that what we put on our bodies becomes part of the veining (markings) that makes up our being and becomes a different type of symbol that labels us. 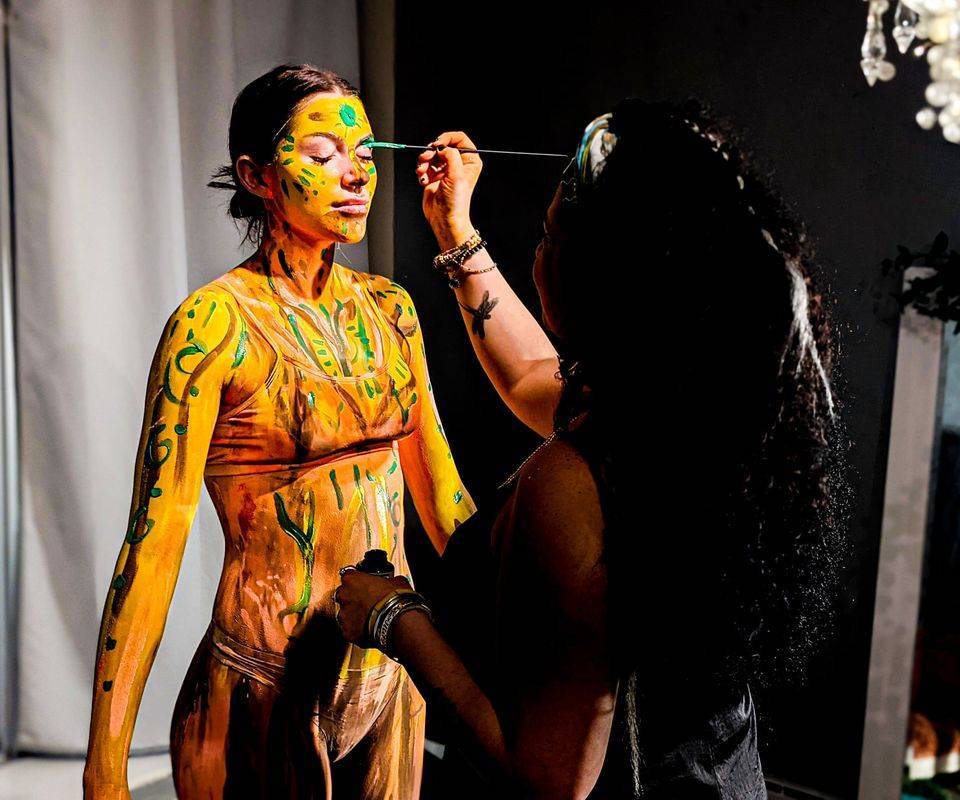 Thus, the standard of beauty has become mostly unified, and its standards have been agreed upon. It does not reflect any uniqueness or singularity, and what’s even worse is that the advent of make-up was aimed at changing and covering up the origin instead of highlighting and celebrating it.

During my years of studying at the Faculty of Fine Arts, I would sit for hours as my colleagues and I looked at a plate of fruit on the table and the fabrics spread out around it. We would all paint the same subject from different angles and in different art materials that would often range from charcoal and graphite, to colored oil paint.

During the six hours that I would spend in the atelier, I was often tempted to experience the feel of things, the difference between the feel and texture of an orange, to the feel of a cloth, and the texture of a plate. I would then agree with myself to paint on my body, not on the canvas, and I’d invite my friends to join me.

From here the passion began, and the idea turned into a project, then into private art sessions, then into group workshops, and then into an art exhibition and spiritual art sessions.

Art is medicine, and body painting still amazes me after all these years as though I had just discovered it. So now I take my awe with me and travel to hold painting workshops and invite people to try this fun and fascinating form of healing. 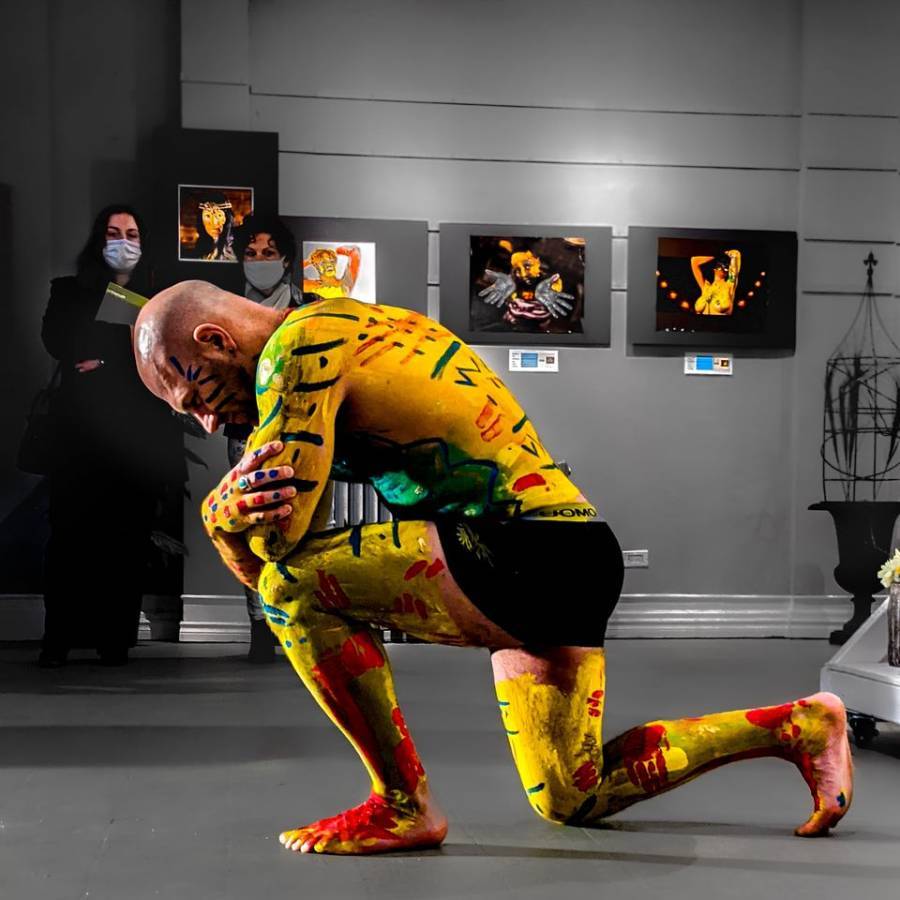 The journey wasn’t always this happy

By delving into this type of art, we can see how intimidating our societies can be regarding arts that use the body as a subject. Throughout more than twenty years practicing this craft, I faced many difficulties and frightening moments, especially when the participants were female, or if they showed a lot of skin. The fear of having their faces shown if the artwork/painted body was photographed always caused a state of fear and extreme caution with them. 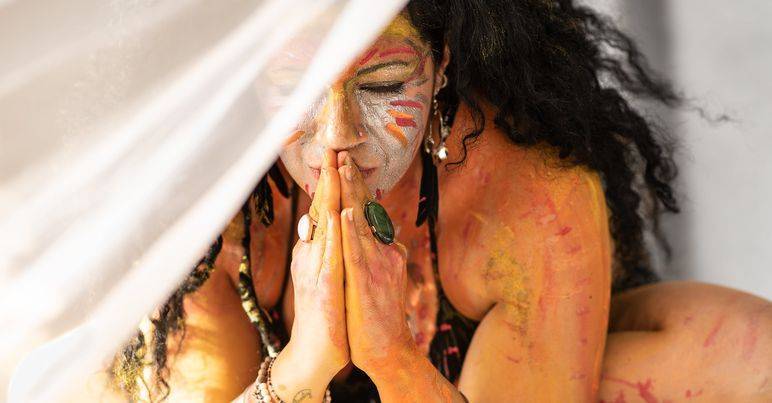 I moved to a more welcoming and accepting country. I’ve worked with painters, dancers, and yoga practitioners, met people who love their bodies and are willing to share this magic with the world, and I can say it was the first time I enjoyed the work I do without any fear or anxiety tainting the moment.

Looking back, I realize today that my love of body painting was the origin of the resistance I had undertaken, the resistance to the boredom in the atelier and being bored of the orange on the pottery dish, resistance to society and what it considers to be the “official dress code” for respectable women. But the years have finally brought me to a place where I will not resist something that has art in it. I will practice art.

When I arrived in Canada, I began working with several projects and institutions. The craft I practice has become a key part of a number of programs for treating communication and self-worth issues. Later, I established separate workshops for individuals, couples, and groups, and was able to make photography sessions with the subjects’ faces exposed, into a reality.

When I paint on the body, I can only be grateful to the person who shares his/her space with me. I think it is remarkable that people I do not personally know trust me with their bodies, and allow me to put my artistic energy on their skin. Each session is a different experience with its own distinct emotions and unique energies.

A meeting with friends:

My friends and I sit and talk about our desire to change the world through dance and art, and to be able to publicly post photos of the art on our bodies. At the time, I was filling out applications to submit them to art competitions in cultural institutions. I filled the form, and attached the photos of the participating model without showing her head or including her identity.

All the photos were without any heads.

The body painting project remained, like a ghost living in small, protected, closed circles, and surrounded by fear as if it were something shameful.

A workshop with Sass group:

I work with a group of girls who have gone through traumatic experiences like physical and sexual abuse. We talk about healing, about being able to love ourselves and love others again; We pic up the remains of what our bodies have gone through and point out the wounds that we are very well acquainted with. We accept them and then draw flowers and hearts over them.

The opening of my very first exhibition:

At the opening, I am filled with anxiety, standing barefoot and looking at my beautiful girls, these heroines, each of whom has gone through profound experiences and gathered her strength to share her body and soul in an exhibition open to the general public.

While waiting for the opening to begin, I had a panic attack that an enraged person would come barging into the place, and start yelling in my face, “You are shameless, and what you’re doing is wrong and haram.” In the best case scenario, they will say that I corrupt girls and that I’m planting forbidden ideas about the body and sex in their heads.

Before the opening, I had a panic attack that an enraged person would barge in and start yelling at me, “You are shameless, what you’re doing is Haram.” At best, they’ll say that I corrupt girls, planting forbidden ideas about the body in their heads

Moments pass, the exhibition door opens and people begin to come in, expressing their admiration for the project and asking about the heroines in the photos and about the entire experience. I feel immense relief, and here the magic of healing through art takes place — when terror turns into joy. The night draws to a close with a happy ending, as the mayor comes to greet me, admire the artworks, and congratulate me on the exhibition.