Lebanon is heading to the polls on May 15 to elect a new parliament. As the Lebanese cast their vote, they are shaping the futures of the Syrian refugees who live within their borders. Syrian refugees represent nearly 25% of the Lebanese population, making Lebanon home to the largest per capita population of refugees. All those living within Lebanon’s borders are desperate for change.

The elections will take place amid a string of crises that have devastated the country of six million people. The collapse of the banking sector, rampant inflation, and the Beirut port explosion have stoked anger at Lebanon’s ruling political class.

“Politicians need a scapegoat,” said Yasmin Kayali, co-founder of Basmeh & Zeitooneh, a Lebanon-based refugee-led organization. “Because of the current narrative adopted by the mainstream media and politicians, a lot of people in Lebanon blame the Syrian refugees.”

Tensions between Syrian refugees and host communities have marked Lebanon’s campaign season. Rana fled Syria in 2013 and has been living in Faraya for nearly a decade. She is one of Lebanon’s 1.5 million Syrian refugees who are eyeing the upcoming elections with dread. “With the elections, the Lebanese harass us on the street,” she said. “They tell us we’re ruining the country.”

Rana fled Syria in 2013 and now lives in Faraya. She is one of Lebanon’s 1.5 million Syrian refugees eyeing the upcoming elections with dread. “With the elections, the Lebanese harass us on the street,” she said. “They tell us we’re ruining the country.”

Previous governments have moved beyond rhetoric. In 2013, the government imposed residency requirements on Syrian refugees, leaving them in constant fear of arrest and deportation. Lebanon’s patchwork of checkpoints serve to limit mobility and enforce curfews on refugee communities. Previous governments have also encouraged refugees to give up their refugee status in exchange for social benefits that fail to materialize, leaving them without legal protection or aid.

“These strategies from successive governments allowed them to de-register more and more refugees,” said Dr. Mona Fawaz, Professor in Urban Studies and Planning at the American University of Beirut. “The number of refugees legally registered is smaller. It doesn’t mean they are leaving -- it means that their presence is criminalized.”

Two weeks before the election, Noura sat outside her tent as her two young children played. “Before the war started in Syria, we had a large backyard where we planted apricot and apple trees,” she said, gesturing towards the trees in her memory. “My sister and I shared a room together. We had pictures on the wall; arts and crafts we made in school.”

10 years later, Noura lives in a tent settlement in Minyara, Akkar. “The camp is dirty” she said, nodding her head towards overflowing sewage nearby. “My kids cannot have a childhood in this camp…They won’t be able to go to school, eat well, or have clean clothes.”

Despite the cruelty of life in Lebanon, Syrian refugees lack viable alternatives or a safe path to return. As stories of arbitrary arrest, torture, and kidnappings flow over the border from Syria into Lebanon, refugees fear for their safety in both government and opposition-controlled territory. The destruction and forced military conscription awaiting young men further prevent refugee families from returning to Syria.

Despite the cruelty of life in Lebanon, Syrian refugees lack viable alternatives or options to return. As stories of arbitrary arrest, torture, and kidnappings flow over the border from Syria, refugees fear for their safety if they return to Syria.

Unable to return to their homeland, Syrians are watching as their Lebanese neighbors shape their futures in the upcoming election. Under the previous government, Lebanon suffered crippling inflation, with the Lebanese lira losing 90% of its value since 2019. Widespread shortages of electricity, medicine, and fuel spread throughout the country. The poverty rate is now at over 80% of the population 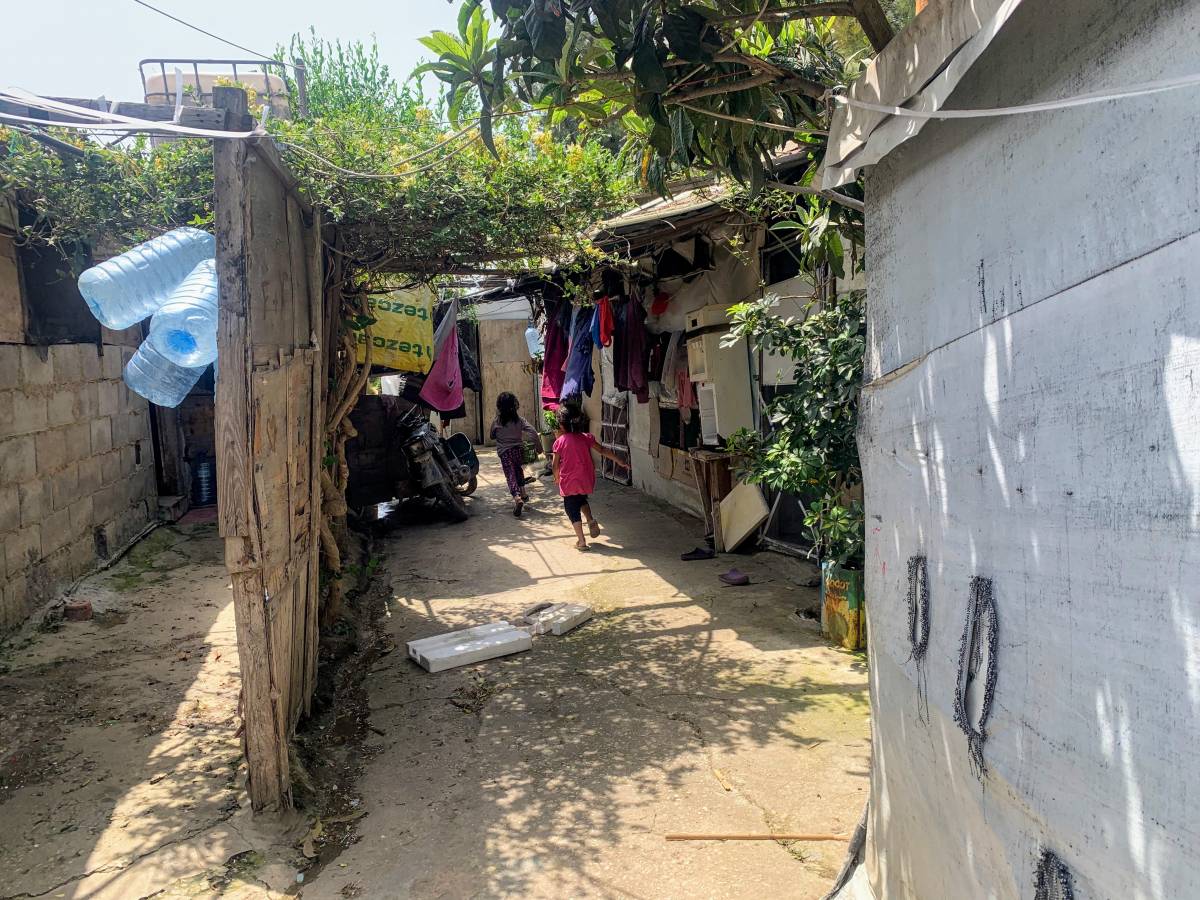 Two children playing in an informal refugee settlement near Minyara

For Syrian refugees, these vulnerabilities are heightened. A 2021 UN assessment found that almost 60% of Syrian refugee children were not enrolled in school in recent years; many of these children have left school to enter the labor force. As Syrians living in Lebanon fail to get an education, they also fail to acquire the tools to rebuild their country and contribute to their host community. At a fundamental level, this means a continuation of the instability at Lebanon’s border and a perpetual dependence on external aid.

“Instead of recognizing the challenges facing us, we are wronging a generation of kids who are growing up on the street and not going to school,” said Dr. Mona Fawaz. “It’s criminal.”

Organizations that serve the Syrian population are also struggling with the collapse of Lebanon’s banking sector. The nonprofit organization Basmeh & Zeitooneh has struggled to continue its humanitarian and development services to Syrian refugees and host communities. “We suffered a lot from the banking crisis on a number of levels, not being able to access our funds.” Kayali explained. “When funds were frozen, we struggled to cover certain projects. International donors are now reluctant to fund projects in Lebanon. They’re afraid their money will go missing in the banks.”

Refugees are also watching the rising likelihood that Hezbollah will gain additional power on May 15. A key ally of Syrian President Bashar Al-Assad, Hezbollah views government-held territory as safe for repatriation and has coordinated with the Lebanese government to return refugees. Syrian refugees fear that a win for Hezbollah will bring increased pressure to return, despite widespread allegations of torture, arrests, and forced dissappearances in Syria.

Refugees are watching the rising likelihood that Hezbollah might consolidate power on May 15. A key ally of President Assad, Hezbollah views government-held territory as safe for repatriation and coordinated with the Lebanese government to return refugees

The election of a Hezbollah-backed government may compromise international aid to refugees. Many of the largest international donors supporting Lebanon’s refugee response consider Hezbollah a terrorist group. These governments across the Gulf, Europe, and North America may be unwilling to collaborate with Hezbollah leaders in implementing refugee aid programs.

On the other hand, the current government’s initial agreement with the International Monetary Fund may increase the willingness of international donors to partner with the Lebanese government on refugee response. The agreement would provide access to a $3 billion dollar loan in return for implementing structural reforms. Lebanon hopes that the IMF deal will signal legitimacy for the Lebanese state, unlocking financial support and investment. However, other economists like Jad Chaaban have pointed out that the IMF deal will pass on losses from the banking sector to people of middle and low-income brackets.

In the past, conditional foreign assistance has failed to reach the hands of people in Lebanon. During the CEDRE conference hosted in 2018, international donors pledged over $11 billion dollars to Lebanon in loans and grants, conditioned on financial restructuring. Almost four years later, the Lebanese people have received nothing from these pledges.

Similar to many Lebanese, Syrians are desperate yet mistrustful about the prospects for improvement. The daily struggle to put bread on the table distracts from politics. “I don’t have a future anymore and I’ve accepted that,” said Abu Mohammad, a Syrian father from Homs. “But I need to secure a future for my children.”