“Syrian blood has mixed with Russian blood. We bring you good news of the martyrdom of the hero Mudar Abdul Aziz Ali, the first Syrian martyred on Ukrainian land while performing his duty in the Donbas axis, may there be mercy on hi soul and may his name be always remembered.”

These words were posted online by the well-known Syrian journalist Rafiq Lutf on his Facebook page. Lutf is a prominent journalist inside Syria, known to be fiercely affiliated with the intelligence services, which had regularly taken up the task of leaking information to him, especially in the early years of the crisis, and specifically in the Baba Amr dossier in Homs, where he prepared a series of documentaries about the neighborhood. For a short time, he was the hero of “Addounia TV Channel” (later “Sama TV”), before his media luster faded in the ensuing years. 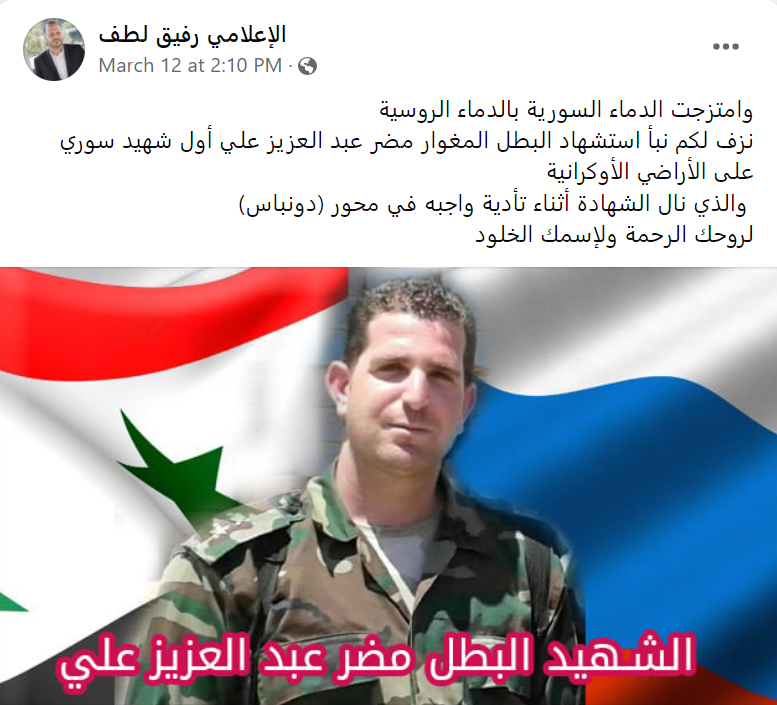 The post in question swept across Syrian social media, until the family of the man in the photo came out to explain that this photo is of their son, who was actually an officer in the Syrian army and had died many years ago in skirmishes inside the country. It turns out the name of the man in the photo is Miqdad Hussein Khalil, an engineer from Tartus’ countryside, an army captain, had died in Idlib in 2015. 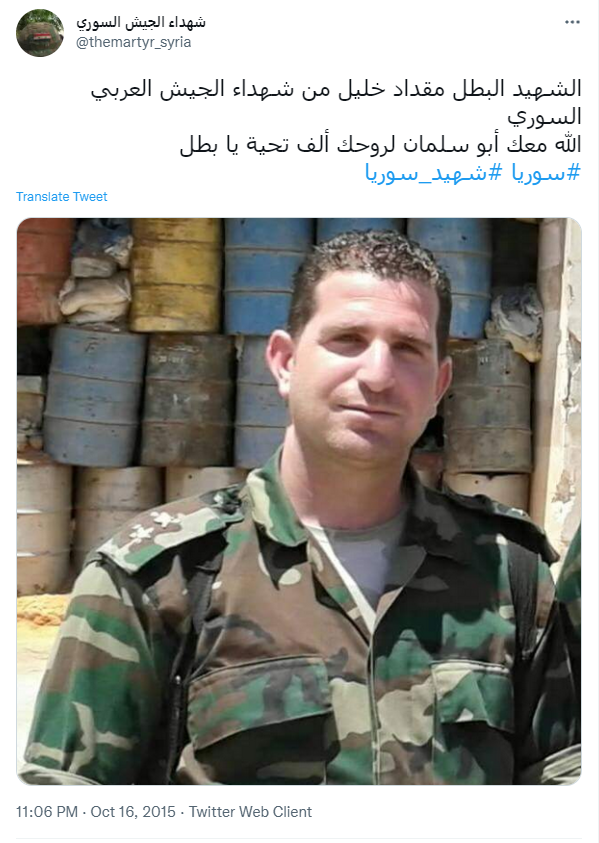 Although Lutf's post was fake news, he did not delete it. Some have theorized that he had known in advance that he was providing false information, and his true purpose had been to read the mood of the street when it came to news like this — the sort of news that seems will soon be widely present across the pages of the blue site.

Welcome to the new Syria

Syria is now exporting ‘professional’ mercenaries to every corner of the world. They fought in Libya, they fought in the Nagorno-Karabakh region, and they are soon expected to arrive in Ukraine. They packed their fighting “experience” and headed to foreign arenas outside, some to fight in Russia’s wars and some to fight Turkey’s foreign wars.

I remember just over two years ago, after Syrians were sent to fight in Libya, a friend turned to me and said, “Blackwater Latakia and Aleppo... Welcome to New Syria”.

When it comes to the recruitment of pro-regime fighters, the name of the Russian private military company “Wagner Group” stands out. The paramilitary organization has a special contract with the Syrian Defense Ministry to fight inside Syria.

The company coordinates with the authorities of the Hmeimim Air Base, Russia’s base of operations in Syria, to recruit Syrians for the purpose of sending them abroad. Wagner’s contractors are not openly present on the scene, but rather operate through a front consisting of Syrians to attract those who are willing.

Since the start of the Russian war on Ukraine in the last week of February 2022, many people, parties, movements, and institutions came out to say, “We are with you, Russia”. These all collectively came as an echo of the official Syrian position which firmly and resolutely stands with Russia — a position that is understandable in the general political context, as no one expects the Syrian regime to stand against its international ally.

But for things to come to sending “mercenaries” to fight in the streets of the cities of Ukraine is another matter entirely. It seems that the fighters affiliated with the Syrian regime and the forces that support it have once again set their sights on the dollars that working as “mercenaries” (dubbed  “volunteers”) would provide, just like what had happened when thousands went to provide support for Russia to face the Turks in Libya. How wouldn’t they, when the 700 dollars a month they were getting paid in Libya have gone up to $1000 per month?

I was contracted with the Hmeimim Airport to fight in Ukraine alongside our Russian brothers as a fighter with a monthly $1,000. With my leave to return after seven months, I will receive the full amount and a bonus month salary.

A few days ago, on March 11, Ukrainian President Volodymyr Zelenskyy said that Moscow was deploying Syrian mercenaries in his country.

Russia has not officially confirmed this, but its Defense Minister Sergei Shoigu reported that 16,000 “volunteers” from the Middle East are ready to fight alongside Russia’s allies in the Donbas region in eastern Ukraine. Russian President Vladimir Putin touched upon this matter and said that these individuals wished to take part “by their own volition, and not for money.” He added that, “We must give them what they want and help them reach the conflict zone.”

Fighters from the Middle East? The “Middle East” can only be read here as Syria, as it is the only place where the Russians have “allies” who are ready to embark on a “mercenary” adventure because of the political rapprochement and due to the difficult conditions that the Syrian war created for the people. Also, Syria is the only place that fighters, logistically, can be transferred from to Russia, through the Hmeimim Air Base.

Majed is a 28-year-old Syrian man residing in Homs. He packed his belongings in preparation for travel and the subsequent fighting in the Donbas region. He says, “I’m a former fighter from a combat group within the backup forces in the Qalamoun region that was dissolved in 2017.” He is talking about the Qalamoun Shield Forces, an auxiliary military group that isn’t affiliated with the government army but fights alongside it, just like the National Defense Forces, the al-Bustan Association, the Qalamoun Shield Forces, and the Tiger ‘Nimr’ Forces (after the nickname of Brigadier General Suheil al-Hassan).

Majed recounts how he went to Libya in late 2020 and fought there over two periods. Each period of time consisted of five months, and between the two periods, he went back to Syria for three months. He says, “Now I’ve been contracted with the Hmeimim Air Base to fight in Ukraine alongside our Russian brothers as a fighter with a salary of 1,000 dollars a month. I do not get the salary while I am on the job, but with my leave to return after seven months, I will receive the full amount for all the months as well as an additional month’s salary.” While speaking, Majed tries to wrap the issue in a principled, patriotic, nationalist, and ideological covering, but the issue has more to do with unemployment and the being used to carrying weapons.

For his part, Sami (pseudonym) is a young man who was contracted with what is being called “The Campaign”. It consists of individuals who gather young people to send them abroad through a center established in Homs. He says that it is not public, and at the same time is not hidden, so whoever wants it will easily reach it.

Sami is a former fighter in the National Defense Forces. He found himself without a job, following Russia’s intervention in the war in 2015 and his squad being relieved of its services. He has nothing to invest in other than his strength and his proficiency using a B7 launcher.

Sami began his talk with the necessity of supporting their Russian “brothers”, repaying their debt to them, and standing by them, etc. We suddenly asked him, “Do you think Russia was right in annexing Crimea?” From his expression, he seemed surprised by the question and did not know anything on the subject. He replied with, “What is Crimea?” The man knows nothing about his “brothers”, but wants money to fight alongside them.

Sami spoke of the need to support his Russian “brothers”, repay their debt, stand by them. We asked, “Do you think Russia was right in annexing Crimea?”; Surprised by question, he replied: “What is Crimea?”

A former fighter in the “Fifth Assault Corps — FAC” spoke of the conditions of the fighters within this unit. The FAC, or 5th Volunteer Assault Corps, is a corps that was officially established in 2016 just months after the Russian intervention in Syria. Its aim was to control the militias fighting alongside the regime by shaping them within a military framework with attractive pay.

He says, “This corps was created in Hama under Russian-led command years ago, and will be the backbone of the (military) campaign headed to Ukraine. A fighter within this corps exclusively gets paid two hundred dollars a month outside of the army, and in Russia’s campaign, the amount will multiply exponentially. Everything is very enticing; food, drink and a great salary.”

He added, “Our dispatch is also secured through the Hmeimim AIr Base, and it is a condition that the volunteers are strong and experienced in fighting as well as skilled in the use of weapons. They do not want people to die for free.”

He has not yet made a decision himself, saying “I am still thinking about it.”

The poverty that afflicts hundreds of thousands of Syrians is the only thing that pushes young Syrians towards choices such as these. These young men are easily scouted by agents who are tasked with connecting those who are willing to the Hmeimim Air Base in return for an amount of money that would be agreed upon in advance with each fighter, usually a month or half a month’s salary. It is a “business” that is currently in progress, just like what had happened in their deployment to Libya.

Around 30 thousand young men have signed up to “volunteer”, according to deductions from intersecting sources that are closely following this issue, most notably a Syrian officer who is linked to the Hmeimim Air Base and is coordinating with the Syrian apparatus, asking them to check the criminal records of those volunteering before accepting them. The Syrian Observatory for Human Rights - SOHR has spoken of numbers reaching up to “more than 40 thousand”.

But not every man who has signed up will be accepted. There are criteria and requirements that play an important role. The Russians, strangely enough, refuse to accept any recruits who have committed serious crimes, or those who are wanted for military service. But who knows, these rules may all suddenly change under the pressure of militarization in Ukraine.

The initial contract — the contents of which Sami explained to Raseef22 — states that whoever is killed will not be treated as a martyr in his country, rather, his family will be compensated with a sum of money that is not specified in the contract.

The contract stipulates a clause that was also listed within the contracts of the mercenaries that were sent to Libya, which states that there will be no leave or a return home for the first seven months. Is it possible here to deduce that the Russians are planning a long-term war fueled by the “volunteers” of the “Middle East” region?

At the other end, the Syrian Observatory stated that, in addition to the campaigns to recruit fighters for Russia, “mercenary leaders and forces that fought in Libya and Azerbaijan have submitted lists of hundreds of people, in preparation for military operations in Ukraine against Russia.” It spoke of “monthly salaries exceeding $2000 US dollars”.

The observatory indicated that “Turkish-backed factions have prepared lists in large numbers, by order of the Turkish intelligence,” but that no fighters have left for Ukraine as of yet.

The Crumbling Palaces of Damascus