Happiness overcomes the people of Gaza when electric power is available for more than eight hours in their homes, they feel happy when they buy a cold soft drink bottle in the summer heat, and they rejoice when the Rafah Border Crossing - the only way to travel outside the limits of the city isolated from the outside world - is open.

Many tiny details in the everyday life of Gazans make them happy, even though they’re considered minor and secondary matters in most countries, but in Gaza it has become a struggle to just have them on a continuous basis. Even humanitarian aid has become a source of joy for them.

On the ground, Gazans were on the lookout for news of the approaching Qatari grant that had been suspended since Israel’s latest aggression up till mid-September 2021. They have been clicking on any online link that would refer to it or invite them to register their names to get it. Even a news piece published by local news about the approaching disbursement of the Qatari grant saw more than 150,000 views in a short period of time.

On the day the $100 grant was disbursed, 100 thousand people registered in the social status registry felt elation.

The joy and happiness of Gazans fluctuated between periods of Israeli rule, from 1967 to 1993, and then during the rule of the Palestinian Authority between 1994 and 2007, when the Hamas era started, and is still ongoing. The dream of a “Singapore style Gaza” solidified for them following the economic openness and recovery of commercial, economic and tourism projects shortly after the authority’s arrival. Today, however, the struggle over the provision of basic rights is the prevailing disposition there.

The flow of municipal water in the pipes in the early morning is also something that delights Gazans, just like being able to have their mobile phone batteries charged to the full.

All this has allowed Hamas, following Gazans demonstrations “marches of return”, to promote to the people the idea that realizing some basic rights is an achievement in and of itself - “achievements” like opening the Rafah Border Crossing on a regular basis and the entry of aid. 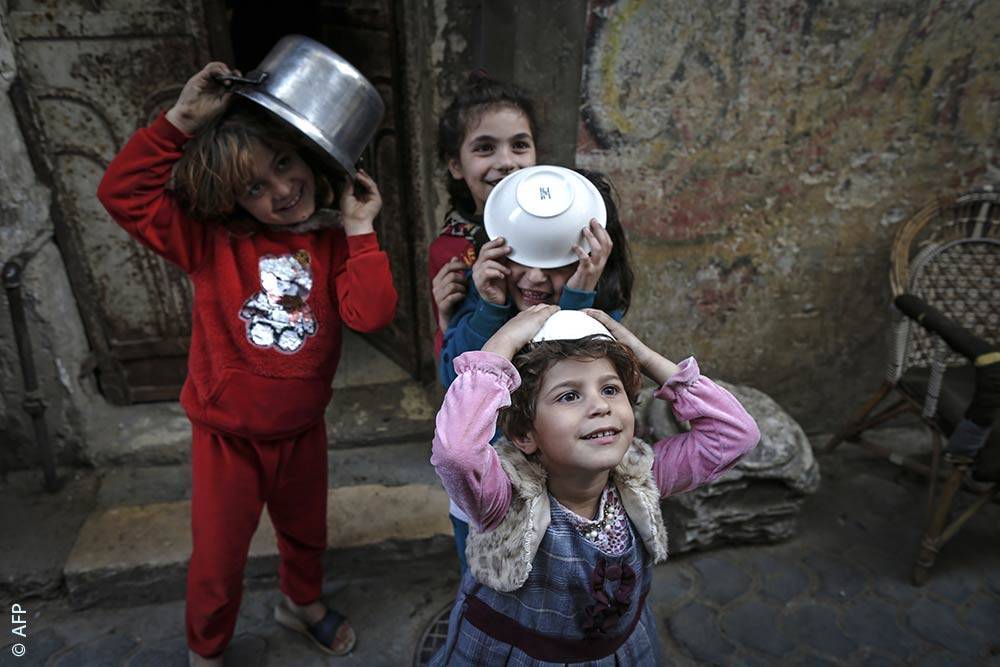 During his childhood, Saeed Abu Sharar, 64, was witness to the Egyptian administration that ran the affairs of the Gaza Strip until 1967. He then lived in the Gaza Strip during the Israeli occupation that lasted until 1993. He was also there during the time of the Palestinian Authority that came after, and now the Hamas rule today.

He recounts how during the time of the Israeli occupation, Hamas had been trying to pave the way for a better life and work for Palestinians to earn money. Gazans at that time would feel joy or happiness whenever news broke out of a successful operation against the Israelis, of losses in their ranks, of any news of operations by the Palestine Liberation Organization (PLO), or even a win in the negotiations of a deal to release a prisoner.

Now Abu Sharar only feels sadness for the current state of Palestinians, especially in Gaza. He tells Raseef22, “Our situation began to change with the Second Intifada. We were deprived of our freedom of movement because of the occupation, and they put up checkpoints before us, but we were never hungry then.”

“I am happy when the electricity comes and I can buy cold soft drinks, when I cannot hear the sounds of Israeli surveillance drones in the sky and can sleep comfortably, and most importantly when I can charge my mobile phone to 100%”

He adds, “In 2007, Palestinians in Gaza grew hungry. Israel was seeking to divert Palestinian demands for their land into a struggle for livelihood, and indeed we now feel happy if we were able to just secure our livelihood, because we are divided and the Palestinian authorities claim that they have accomplished some big achievement when they’re only doing their normal duty.”

Joy after every aggression

Many scenes of joyful Gazans can be seen following the end of each Israeli aggression. The people fall into two sections: the first expresses joy for victory and steadfastness in the face of the Israeli occupation; while the second expresses joy for their victory over the fear that dominated them during the aggression, especially the fear of losing their relatives and homes. So says 40-year-old Ahmed Ghabayen.

Following the end of the latest Israeli aggression on Gaza that took place on May 21, Ghabayen went out onto the streets with his children, expressing his joy that the worst aggression he and his family went through was finally over.

The man does not consider what happened as a victory because Gaza’s most important streets were destroyed along with many small businesses and plenty of dreams. But he wanted his children to feel as if they’re cheering for a football team and coming out of the stadium to celebrate their team’s title win.

“Anything makes Gazans happy simply because they are alive, nothing more,” Ghabayen tells Raseef22, “When the police arrest a thief in possession of goods or money, they post on their pages that they have accomplished an important achievement. A government hospital carrying out a difficult operation in Gaza spreads its news as if it’s an achievement. Even humanitarian aid has become an accomplishment for the government of Gaza, after it promoted so in the media following the end of the marches of return in 2018.”

He adds, “The duties of those in charge of the government are now an achievement. Having access to livelihood rights is an achievement. For example, I am happy when the electricity comes and can buy cold soft drinks, when I cannot hear the sounds of Israeli surveillance drones in the sky and can sleep comfortably, and most importantly when I can fully charge my mobile phone to 100%.”

After the recent Israeli aggression ended, Israel restricted the entry of goods to the residents of the Gaza Strip for two months. At the top of the list of “contrabands” were soft drinks, with the most important kind for Gazans being the “Club” drink.

Usually, everyone has access to this drink, which costs one shekel ($0.33) a can. Thousands of comments surfaced online talking about searching for the drink in grocery stores or supermarkets, with people even chasing after the ones that did sell it in order to buy the drink in large quantities.

After the recent Israeli aggression, Israel restricted the entry of goods to the residents of Gaza for two months. At the top of the list of “contrabands” were soft drinks, with the most important brand for Gazans, the “Club” drink gone missing.

Karim al-Ghoul, a resident of the Sheikh Radwan neighborhood, posted online in mid-June saying that he had found a “Club Cola” at a grocery store near his home. Two hours later, all the crates carrying the drink were completely cleared out of the shop. Al-Ghoul explains that the “Club” drink is a source of happiness for Gazans when they put it in the refrigerator and it gets very cold, given the daily power cuts and Gazans not being able to run their refrigerators on small generators so that their bills do not skyrocket.

Al-Ghoul says, “Gazans know that there will be no political, economic or social solution that would lift the siege on them, so we chase after the simplest things in order to feel happy. When the Israeli occupation announced its intention to grant Gazans work permits, everyone rushed to look for, ask and prepare their papers. We want to escape from our reality, even if it is through the working with the enemy.”

Working in the occupied land

At the beginning of October 2021, the Federation of Palestinian Chambers of Commerce operating in five governorates in the Gaza Strip announced that registration for a permit to cross the Green Line is open. Graduates, workers and craftsmen were so quick to prepare their identification papers that they crowded in front of photo studios in order to put their photos and official papers on CDs. They were all happy. One man, out of his great happiness and haste, even sold his wife’s gold accessories to secure a fee that amounts to 3,000 shekels ($950), in order to open a commercial registry under the terms of registration.

Palestinian media is afraid to talk about the joy of Gazans to return to work within the Green Line, or inside the territories of Palestine occupied in 1948. But on the ground, Gazans do not hide their desire to work in Israel so that they could secure a better future for themselves, better than the years that were lost during the Israeli siege and the Palestinian division from 2007.

Bahaa Abu Dalal says, “We don’t want any politicians to tell us how to be patriotic. They are forcing hunger and starvation on us. On a personal level, I was happy once when the price of a pack of cigarettes was lowered for a while. We pay a tax in every aspect of our lives. With every pack of cigarettes, 9 shekels ($2.8) go to the government of Gaza, meaning that when I want to light a cigarette to escape our harsh circumstances, the de facto government chases after me with the tax.”

Black comedy writer Omar Abu Nada often criticizes this bleak living reality on social media. His posts touch on the reality of Gazans in both a humorous and critical way. He sees that happiness for the people of Gaza may never surpass the inherent rights of any citizen in another country.

He says, “The social situation, from poverty and unemployment to sitting in a hot zone between political poles, wars and the Israeli occupation, have all have given people the sense that happiness comes in the form of financial aid in the simplest things, while the rulers in Gaza and their sons eat and have investments both inside and outside the Gaza Strip. Those in power are the reason of poverty because poverty does not live with us.”

Abu Nada holds Egyptian citizenship along with the Palestinian. He has noticed during his travels that there is a difference between the poor people of the world and the poor in Gaza. The poor people of the rest of the world have freedom of movement, and no matter how poor they are, their situation is different from that of the poor in Gaza, because the people of Gaza are chained down and earn their livelihoods under humiliation.

Abu Nada does not hope for a solution that would come on the path of Palestinian reconciliation, and stresses that Gaza is the biggest victim of the Palestinian division, more so than the West Bank.

Syria is the World: On the Failures of Leftist Internationalism