Following a string of fires that plagued government hospitals in Iraq and claimed many innocent victims within their corridors due to government negligence and corruption, some Iraqis on social media began recalling the toughness of Saddam Hussein when it came to managing state affairs. Word once again spread of the time when Saddam executed former Iraqi Minister of Health Dr. Riyadh Ibrahim in the eighties, under the pretext of negligence that had led to the death of wounded Iraqis.

But was this official version - which still seems to convince many all these years later - actually true? Do tyrants, even after death, still have more power over minds and mentalities than their innocent victims do?

The following scenes paint a picture drawn from eyewitnesses close to the events as they took place. They may perhaps help us understand how history is written, or in other words set the record straight about what tyrants want to go down in history. 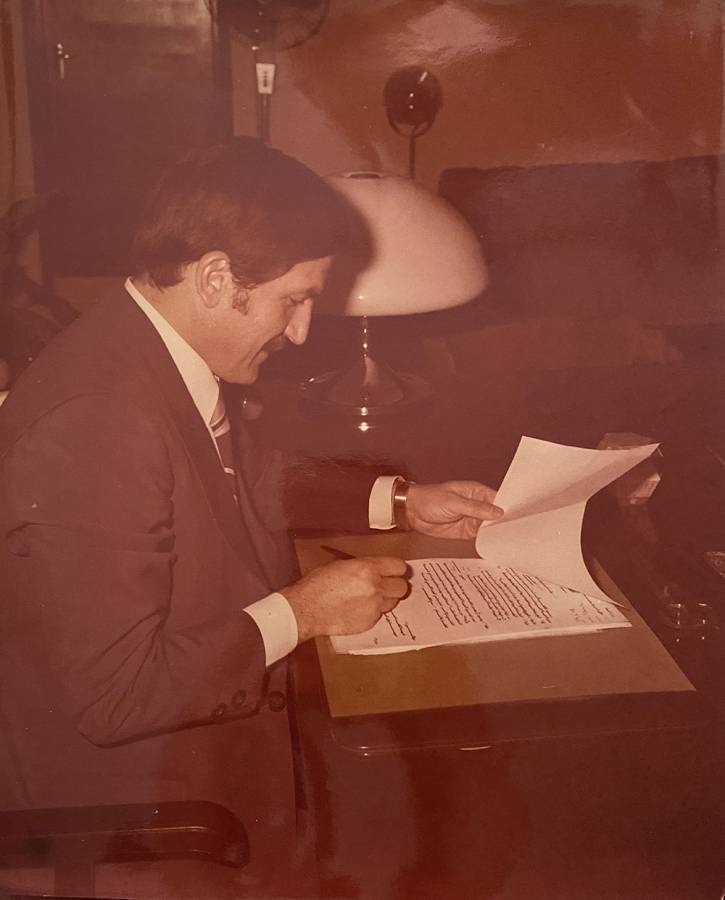 One evening in October 1982, I woke up to the sound of my mother crying. I hurried out to the living room to find my mother sobbing heavily, with her face buried in her hands, and my father stunned silent, staring at nothing in bafflement. I asked them, “What’s going on?” My father answered me in a low voice, “They called from Baghdad and said that your uncle Riyadh had gone to visit his parents.” Worried and confused, I quickly ask him, “Meaning?” My father looked at me and said, “Son, Riyadh’s parents passed away a long time ago.”

My family’s relationship with the former Iraqi Minister of Health Dr. Riyadh Ibrahim went beyond that of familial obligation or a mere marriage relative on my mother’s side. He was a close friend of my parents, and a regular visitor to our house in Kuwait whenever he landed there on an official or private visit, and this was also the case when we would visit Baghdad.

This doctor - who had specialized in histology and embryology, holding a PhD from the United Kingdom - had been enamored by dreams of nationalism, unity and pan-Arabism set forth by the Baath Party. He was appointed minister during the reign of President Ahmed Hassan al-Bakr, and was able to prove his professional competence by raising the health sector in Iraq to much higher standards at the time. Many doctors who worked with him still recall on social media his notable efforts and high ethical standards when it comes to dealing with staff and employees, regardless of their rank or position.

Dr. Riyadh was executed after leaving the ministry under the pretext that he had allowed the use of potassium chloride, which in turn led to the deaths of war wounded Iraqis. It is ironic that Dr. Riyadh, accused of premeditated murder, had been awarded the Shousha Foundation Prize in 1979, which is granted by the World Health Organization “to acknowledge the efforts and work of well-known scientists, researchers or dedicated people who have greatly contributed to the advancement of public health.” 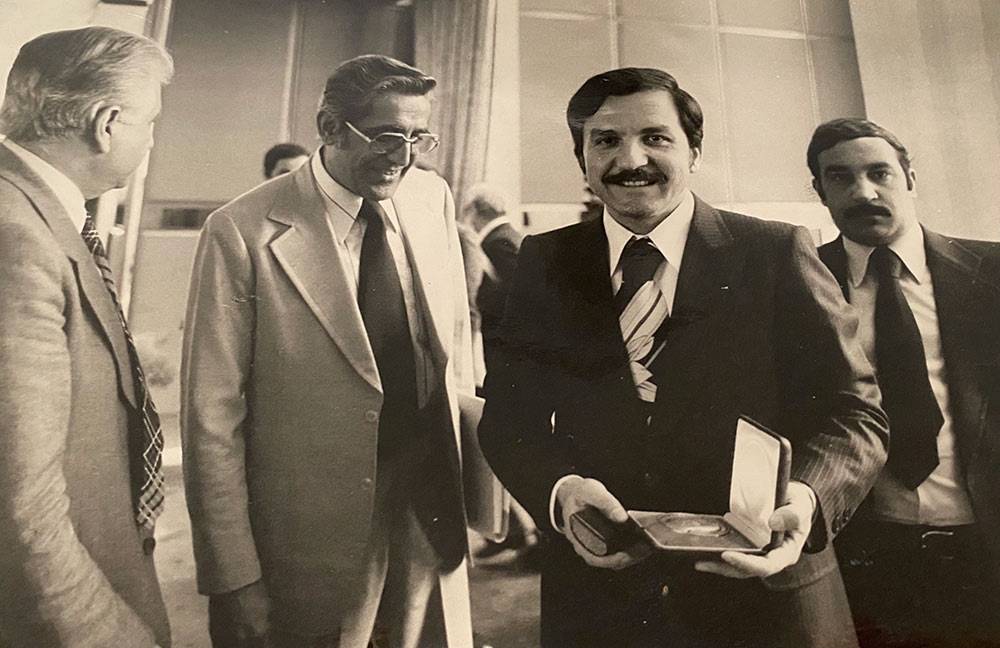 Dr. Riyadh receiving the International Shousha Foundation Prize in 1979 from the World Health Organization (photos from the family archive). 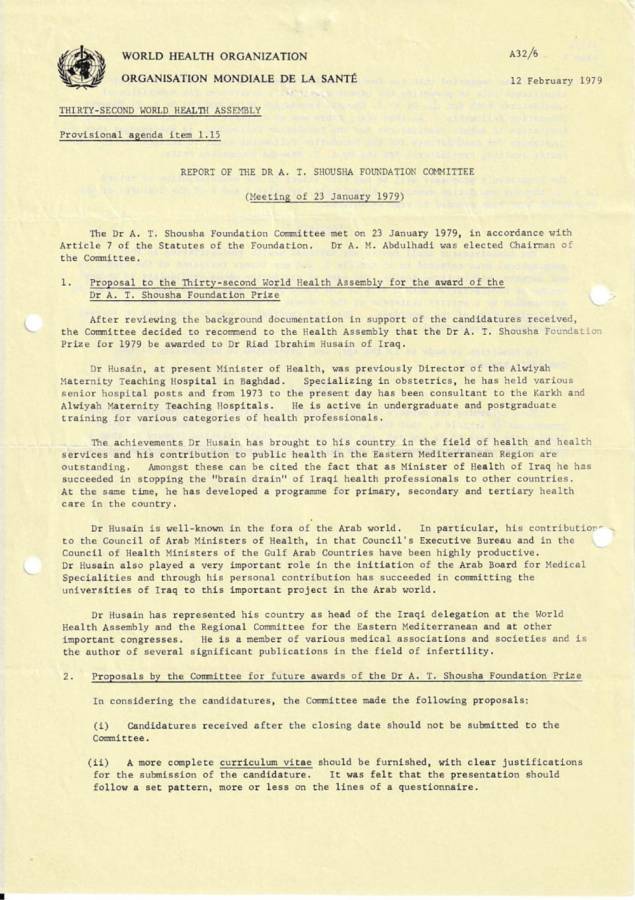 Saddam Hussein in his military uniform presides over a meeting of the Iraqi Council of Ministers and the Revolutionary Command Council in late 1982. Saddam begins by talking about the need for accountability and punishment for mistakes and acts of negligence, no matter how high the wrongdoer’s position is in military rank or a political party.

Saddam then begins talking about the minister, saying that a memo was sent to him stating that there was a type of medicine that kills the wounded, and his only reaction was a note on the margins saying, “Seen”. The president’s facial expressions change little by little and his tone grows increasingly heated as he accuses this “minister of the Iraqi state” of carrying out the same thing Iran is doing on the frontline by killing Iraqi soldiers, and that he (i.e. Saddam) does not allow mercy in such cases.

Was the official story that Saddam Hussein executed Health Minister Dr. Riyadh Ibrahim over negligence claims actually true? Do tyrants, even after death, wield more power over minds than their innocent victims do?

Saddam’s eyes flash with rage as he accuses the minister of having known connections, and that he is a part of a “fifth column” and was executed over this. The president at the time didn’t say anything about a court trial because there was none. Saddam killed the minister without any legal procedures and did not even bother to set up a moot (mock) court, such as the one that sentenced Iraqi leaders to death in the al-Khild Hall massacre three years earlier, on charges that have been proven with time to be poorly fabricated.

Mrs. Afra Sultan Amin, the sister-in-law of Dr. Riyadh, tells Raseef22, “The family still does not know the real reason behind Riyadh’s execution. He left and took his secret with him.”

She adds that Dr. Riyadh had not been at ease with the way things were being managed in the ministry and had invoked the wrath of Saddam one day during a cabinet session when he questioned why the Ministry of Information is receiving a budget higher than that of the Ministry of Health.

Mrs. Afra says that Saddam had then replied in anger, saying that the minister had no right to question such decisions. This reflected negatively on the mentality of Dr. Riyadh, who used to take his father-in-law, Sultan Amin, on walks outside the house for fear of government surveillance, just to reveal his dissatisfaction with the way the state was run. 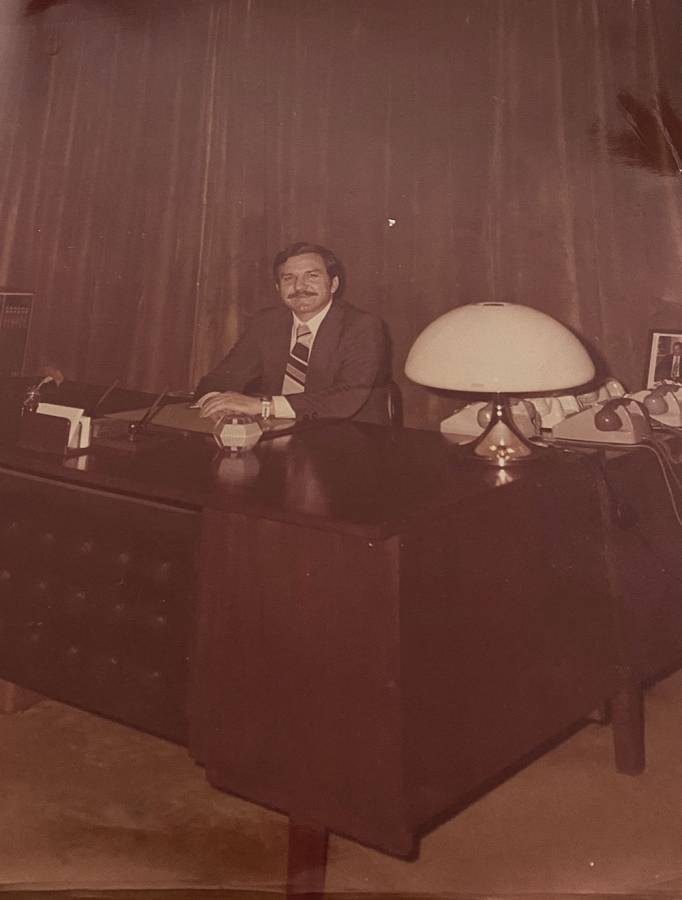 She recounts how her father did not talk about what had been said during these talks, but he did mention once that Riyadh told him, “We are sheep, not ministers.” Given the nature of the regime’s strict totalitarianism, there was no such thing as a minister giving in his resignation, because this might indicate dissatisfaction with how the country’s affairs are being run - a deadly sin to commit. Therefore, Dr. Riyadh patiently waited until he was relieved of his duties to begin his retirement in August 1982.

At the time, he began preparations to open his own clinic, but it was not long before his house was raided on August 25, 1982 at 4 in the morning and he was arrested. Mrs. Afra says that Riyadh sent a message to his family through some prominent officials, saying, “Do not mediate with anyone, because I am innocent and will be out within a few days.”

Shortly after this letter was sent, the doctor was executed by five rounds of fire, and his body was handed over to his family on the condition that he be immediately buried.

The movable and immovable funds and assets of Dr. Riyadh’s family were confiscated. His family suffered from major financial and psychological pressure as a result of the father’s sudden execution and his reputation being publicly tarnished. Years of enduring this suffering finally forced the widow to request a meeting with Saddam Hussein to ask him for help to secure a better life for her son and daughter.

When the present is disheartening, it does not necessarily mean that the past was bright. Collective memory, in its quest to protect its trembling self from the truth, makes the aura surrounding past leaders brighter, the darker the present is.

Mrs. Afraa says that Saddam welcomed her sister “with crocodile tears”, asking her to meet her son and daughter at a later time. He gave her a car for the family to use and gave them back some of their rights.

Mr. Abdel Salam al-Bakr, son of former Iraqi President Ahmed Hassan al-Bakr (July 1968 - July 1979), says that he got to know Dr. Riyadh through his father, as he was the head of the Higher Committee for Health that supervised the treatment of the president due to his position as Minister of Health.

Mr. Abdel Salam tells Raseef22 that Dr. Riyadh’s close relationship with his father carried on even after his resignation from the presidency and his subsequent handover to Saddam Hussein in 1979. He points out that the most likely explanation in this case is a political one because of Dr. Riyadh’s close relationship to al-Bakr even after he stepped down from the presidency, in addition to his dissatisfaction with some policies and decisions. 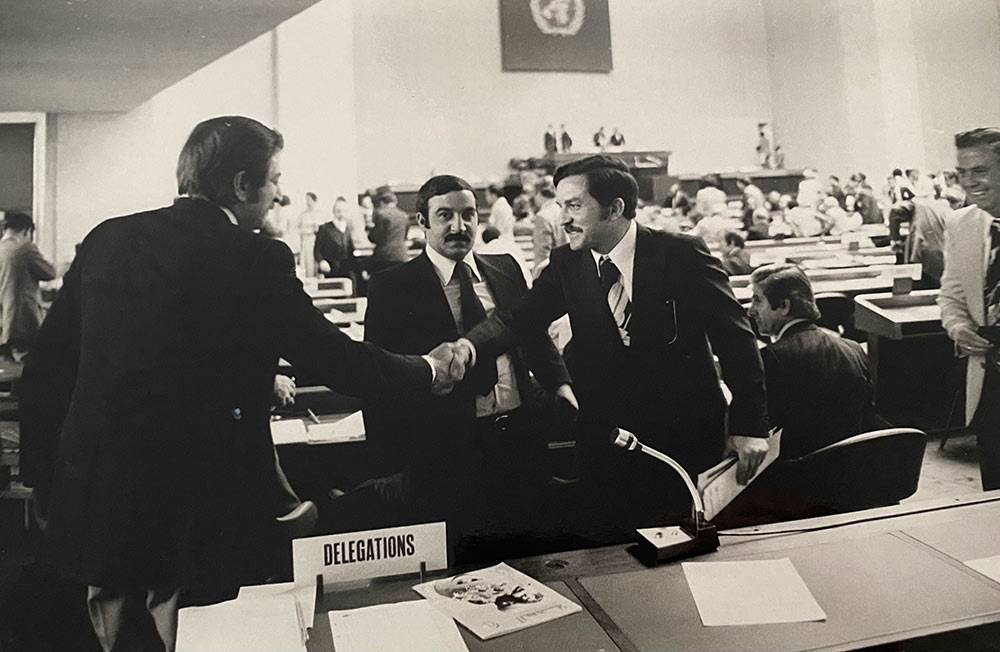 For example, he remembers that Dr. Riyadh, during one of his visits to al-Bakr following his resignation, spoke critically of the state’s policies, saying to al-Bakr, “Do you remember, sir, how many doctors we persuaded to return to Iraq? All of them have now left the country.”

Mr. Abdel Salam adds, “He was bold in his criticisms, and they may have reached the ears of those above.” Since they couldn’t just say that he spoke up or disobeyed commands, it was necessary to find a justification for what they did, so they made up some reasons.

He concludes his testimony by saying that it’s not possible for Dr. Riyadh “to do such a thing. What’s his benefit out of it? Also, this medicine isn’t only intended for the war-wounded, but also for those who have been injured by a knife or a car accident.”

Mr. Abdel Salam also strongly ruled out the circulating narrative that Dr. Riyadh proposed to Saddam that he step down in favor of bringing al-Bakr back to presidency to end the war with Iran.

But Do Leaders Lie?

When the present is terrible and disheartening, it does not necessarily mean that the past was bright and glorious. But collective memory, in its quest to protect its trembling self from facing the truth, makes the aura surrounding past leaders brighter, the darker the present gets. Without this, people will be forced to admit that the current terrible present is a link in a chain of connected defeats, after we failed to build systems that would pave the way for a future that respects human beings and establishes democracy and justice.

This is how we see the public opinion dealing with previous leaders with some semblance of respect and validation. But history tells us that tyrants not only lie, but also document their lies, which is used as a means to get rid of all those they doubt their loyalty to, stifling the voice of their victims even after they have been buried and then rewriting history.

The video in which “martyr” Saddam Hussein talks about the execution of Dr. Riyadh has had - until the date of writing this article - more than 1.3 million views, while the accounts confirming the man’s innocence of these accusations remain scattered across the pages of the internet.

This phenomenon reoccurs in yet another video of Saddam that has garnered more than three million views. In it, he talks about the fake conspiracy of 1979, in which he ruthlessly and brutally got rid of senior leaders after he questioned the sincerity of their support of his presidency.

The voice of the leader remains the most heard historically, while the voice of the truth fades into the backdrop. For some, even if the leaders lie and falsify, they remain true and honest. If we do believe the facts and expose the leader’s falsification of history, all illusions of glory and false heroism - which some people still live and feed off amidst the rubble of the present - would burn to the ground.