Far from the towers and skyscrapers that shape the urban landscape of Dubai, we were caught off guard by the old and modest buildings in “Freij al Murar” in the Naif area, where the streets and buildings have preserved their ancient look. They highlight the presence of another form of life in Dubai, the city of contemporary high-rise towers. Life in these streets is simple, but unique, it reflects the fusion of cultures in its many forms.

The little cafés that litter Freij al Murar each have their own stories crafted by the African waitresses that work in them. The waitresses in these cafés are not like any of the others. They seek to win the customers’ affection in a kind and gentle manner, treating them as if they were friends, to urge them to open up or even just take a break from the outside world and what it holds. This style of hospitality transforms an ordinary, humble and unassuming café into something more intimate, a small, charming and familiar home.

The physical space of Freij, which is located in the middle of the Deira area, makes us feel like we are in an African city, in terms of clothing, customs, restaurants, and the majority of the pedestrians and residents, if not all of them. It is all reflected in the culture of Dubai when it comes to the clean streets, the organized parking, and the constant patrol of police cars within the emirate in order to uphold security and safety and to avoid problems. 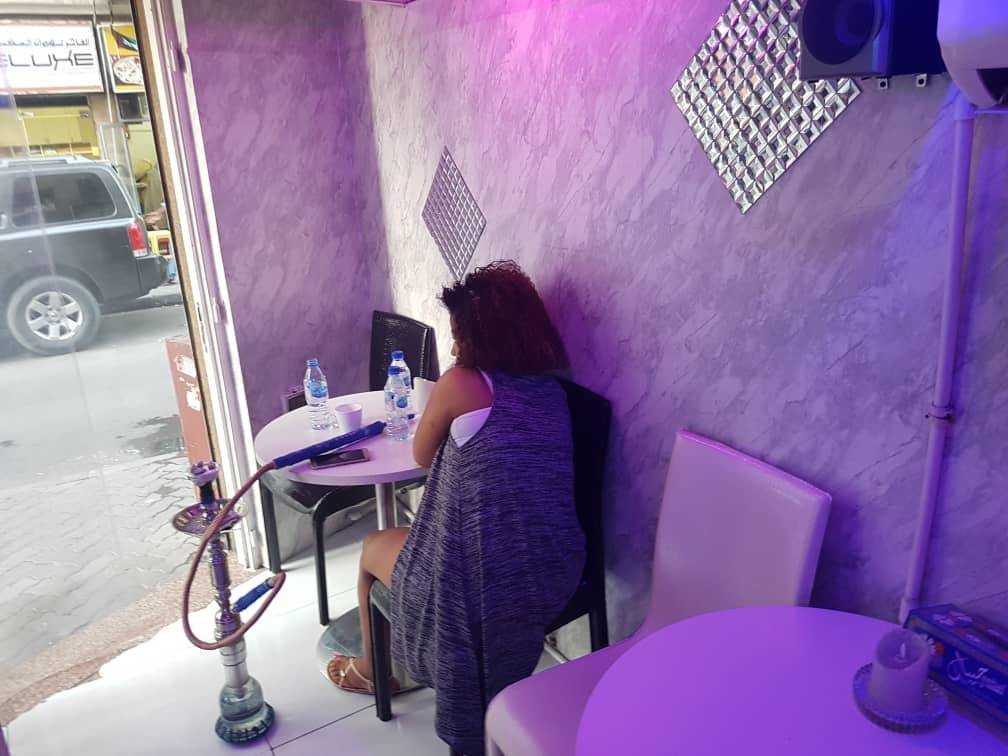 The cafes are adorned with elaborate decorations, with lighting that is often vivid and colorful. The soft colors of the paint in them give off a feeling of calm and serenity, as these places beckon their visitors to embrace an atmosphere different from the ones they see in the heart of the emirate. Violet lights and colorful sofas - all these reflect an ambience and atmosphere that carries many of the cultures that reflect the forms of life in the city that holds more than 200 nationalities together.

The little cafés that litter Freij al Murar each have their own stories crafted by the smiling African waitresses who run them.

And the cafes are not the only odd sight there. Often, in these markets, we can find peculiar goods that are not usually allowed in the well-controlled and closely watched markets of the emirate. All these goods, which include dangerous tools, counterfeit mobiles, and fake merchandise, are in the one-way street that passes through “Freij”, the word for “neighborhood” in the Emirati dialect. They are all of course well hidden, and are also well tracked by the authorities.

Some people find it strange that such a place is romanticized in contrast to the luxurious lifestyle that Dubai residents often lead. However, a person often grows tired of the emirate’s excessively organized lifestyle, and perhaps for a few hours, longs to escape from the pressures of life to a place that allows for a little lack of discipline or organization. Even though the district cannot be classified as a heritage area in accordance to the general concept, it fulfills this purpose in Dubai, as it is a destination for tourists, especially those belonging to francophone culture since most of the waitresses speak French in addition to Arabic.

Freij al Murar and the Naif region saw their fair share of infections during the peak of the Covid-19 pandemic, which had been able to spread widely as a result of their lack of compliance with regulations. The lack of commitment to quarantining and social distancing is in part due to the area teeming with poor and impoverished groups whose livelihoods were destroyed by the lockdown, not to mention the fact that a large percentage of its residents are violators of the residence law in the Emirates. Thus, the region was completely isolated and separated from the city. Entry and exit into the area was prohibited so much so that food, drink and other life essentials were brought in via specialized cars under strict internal control every day until the pandemic was brought under control.

Freij al Murar - named after the famous Marar (or Murrah) tribes - received its own share in novels, where the novel “Freej Al-Marar'” (also Frij Al-Murr) by Sudanese writer Hamid Al-Nazer spoke of the Freij. It tells the story of a young love-struck immigrant in his country, who then, by a stroke of fate, ended up in Freij al Murar. The writer describes the locality in detail, especially the stories of Ethiopian girls who go to the UAE in order to work as domestic workers, and after they discover the nature of the Dubai community, they flee from their employer and find themselves in the middle of Freij al Murar. 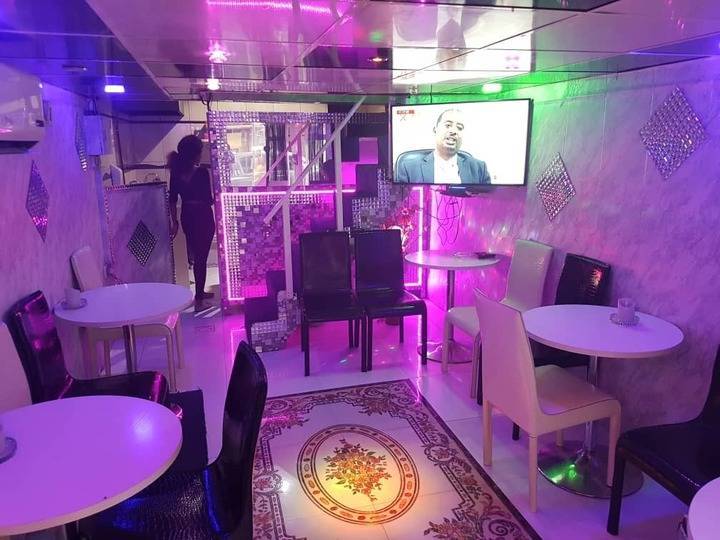 Girls in the Cafes of Freij al Murar

The working-class neighborhoods are rich with a myriad of stories and tales, characterized by the nature of the people who have resided in them for decades and etched their culture and living traditions onto them, accompanied by the spirit and nature of Dubai. It is an outlet for everyone who needs a break, especially the young newcomers. Many a story tells of a lost love or a distant loved one far away in their country of origin. It is a relationship that may last for days with the waitress of his choice, or perhaps even for a few hours, as the visitor opens up and pours out his heart then leaves, perhaps without anyone remembering him later on.

The girls openly work in the cafes, and may work in other things in secret such as private meetings with tourists and visitors. In the center of this reality, there are other groups that are active in illegal business such as drug trade, money laundering, and fraud.

African girls sit at the doors of cafes to attract customers, the majority of whom are usually men looking to spend some good time talking with girls within a completely different atmosphere than that of the other side of the city.

After luring him inside, the café’s waitresses approach the customer and he then chooses his waitress. Each customer gets a waitress who would sit with him for the duration of his stay, serving him and fulfilling his requests. Of course, she would try to get him to add as much as possible to the requests, since he will pay for two people - a bill that is relatively cheap compared to the rest of the emirate.

The customer service, the quality of the service, along with the other standards that Dubai cafes and restaurants have adopted are completely different here. Here, ordering is done the African way, since tea and coffee come in special containers brought by the waitress with two glass cups. She drinks his order with him and calls him “habibi” (my love) from the very first moment he walks in, unlike what café-goers in Dubai are accustomed to, with words like “sir” or “pasha”.

African girls even have their names and labels printed on some of the cafes. While walking there, names such as “Sarah’s Cafe”, “The Sisters’ Cafe”, and “Lina’s Cafe”, among others can be seen. And all cafes also carry feminist labels and adopt the feminist way of thinking with their workers. The girls here place orders, make the shisha, and change the “narah” (coals). The only men there are the visitors, and the sight of girls working on coal stoves outside the cafés is not a strange one there, not even drawing the attention of passersby.

Meeting Sarah and Some Customers

We met Sarah, one of the waitresses there, or according to what she said, she’s the manager of the place. We do not know if it was a real name or a pseudonym, because Sarah is a very common name in the neighborhood, and is also common in African countries.

Sarah told us that she has residency in Dubai, after she benefited from the amnesty issued by the UAE government in 2018 granting residencies to all violators for a full year and exempting them from the fees for all previous violations. That is why she is an essential staff member in her workplace as opposed to her two colleagues in violation of their stay. 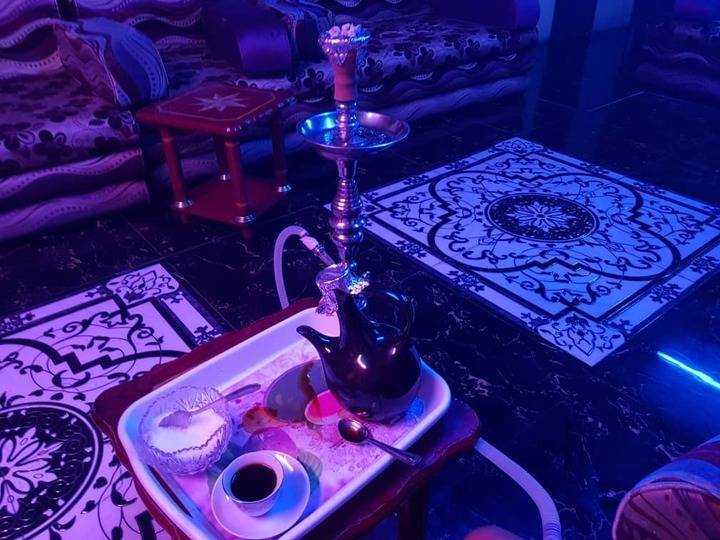 After we ordered shisha and tea, which Sarah also had with us, we asked her about the number of girls who work with her. She replied that usually one or two girls are enough, but she requests the presence of several more in the event that more visitors arrive at the cafe. She reveals that all the workers there - her included - work by a system of “commission”, so to speak, where they get a percentage of the customer’s bill from the café, or what he could personally give the waitress if she provides more services. Sarah told us that we could befriend the girls if we were nice to them. It seems like she didn’t trust us much the first time.

The only men present in these cafés are the visitors, and the sight of girls working behind coal stoves outside the cafés is not a strange one there.

There, we met a French man and his wife. He said that he was on a visit to the popular market to take advantage of the cheap products, and had gone into the cafe to rest. He ordered a bottle of water and some juice which wasn’t available. The items available for order there are very limited, so he asked for green tea instead.

Also by chance, we met a football player named George. He said that he was a professional player who came from Ghana to play with one of the Emirati teams for 10 thousand Emirati dirhams per month. However, they told him that he would not be able to receive any of his wages until he began playing in matches, but then the lockdown began and all sports activities were halted, prompting him to eventually begin working in security and organizing events.

George pointed out that he needed a place like this one because he would feel very lonely at times, but then added that the situation has improved a lot lately, as he has begun playing football with a group of young people from diverse nationalities. This has helped him make some friendships, but he hadn’t forgotten the place that had embraced his loneliness, and the girl who would eagerly listen to his story every time he came to visit her whenever the opportunity arose.

Souk Freij al Murar is a place full of stories and interconnected relationships. It houses a world alien to our Arab narrative - the world of Abyssinia, its history and its people who leave their impoverished countries and come to the Arabian Gulf to improve their living conditions. Each of them has his/her own story, which may be intertwined with the stories of others.