The scent of cypress trees near the window sweeps inside the room in the boarding school. My mother Samia is 11 years old. The American teacher at the Friends’ school in Ramallah, not far from Jerusalem, rushes towards her and orders her to pack. She needs to move north right now. It is Spring in Palestine.

Samia and her 13 year old sister hurry with their tiny bags to a bus on its way to Nazareth. Their farmer family is not wealthy but has a lot of land: olive orchards, an olive press, and a wheat mill. Three days after they arrive, Samia hears that the whole population of Haifa, including her eldest sister and four nieces are now something called “refugees”.

The British are occupying Palestine until it is ‘mature enough’ to be independent. Now, while Palestine is being ethnically cleansed, the British summon 3 people to distribute sardine cans and bread to over 70,000 Haifans.

In their homes and while people are collecting food they are shot at while megaphones blare: “You can stay in your homes”. One of these food distributors is Samia’s older brother, a Protestant priest. He later tells her how the Haifans were pushed to the sea and got on boats. Not all survived. Some drifted to Lebanon and others to Gaza. The rest ran in all directions, families separated behind multiple borders with no way to know who was where.

“Mom, why did you say that the Palestinians are the biggest refugee group in the world without a homeland or passports?! They can all do like my friend and ask for Israeli passports!”

The information about massacres and rapes comes from all directions. Samia’s mother Salma, gives her little daughters each a pillow-cover stuffed with one dress, an underwear and a towel. Inside each bundle she hides one of her gold bracelets. She tells the girls to use the bracelets to trade against rape by the new invaders.

Salma, who has lived under the Ottoman, then British, is facing the third occupier, lifts her arms to the sky and says “May Allah and Jesus be with us”. Every day, more Palestinian towns are emptied of their inhabitants and occupied. Palestinians turn into the biggest refugee group in the world.

Thirteen years later, Samia is lying on her back in a Jewish hospital in Haifa under neon light. Only Hebrew is spoken and Samia can recognise the country of origin of the doctors and nurses by the newcomers’ accents.

The nurse comes and looks from above at my mother and her big belly and says in Hebrew: “Go on, you all scream. You are so oppressed by your culture and your screaming during delivery is the culmination of all that oppression.”

The 23 year old lying on a plastic sheet in a city that has been ethnically cleansed by the people around her, scared, fearful, in pain and alone, did not let out a single sound. She gave birth to her first baby, me, and went into depression.

And now here I am. In Amsterdam my daughter went to elementary school where she had a classmate with multiple identities but identified as Jewish, which is prima. The friend’s family have no known roots in Palestine/ Israel but in addition to their Dutch passports, have Israeli passports.

The fact is, a lot of hard work is done to erase the normality of Palestinians. The Palesitnian as human is taboo. Just like Jews in Europe in earlier times

Reema, my daughter who visits her grandparents and cousins yearly in Haifa, is baffled by this fact. Then she thinks: “Mom, why did you say that the Palestinians are the biggest refugee group in the world without a homeland or passports?! They can all do like my friend and ask for Israeli passports!”

Reema grew up as an Amsterdammer and the Second World War has been ingrained deeply in her. I tell her that only if you claim one religion, Jewish roots, you can come anytime and live in the homes and on the lands of Palestinians, but not if you are Palestinian with documents to proof your belonging.

My daughter’s eyes grow real wide and she goes: “And these people with documents are the people now bombarded in Gaza?” I have to nod. After some time, I bump into the friend’s mother and we chit chat and she goes: “Did you watch the Fawda-series on Netflix?” I get startled and say: “No, this is a seriously racist series. It dehumanises Palestinians as murderers and villains.”

The mother shrugs and says: “Ok, then I am racist.” My head is spinning thinking about me watching an antisemetic film and shrugging to ‘ok then I am anti-semetic’. The fact is, a lot of hard work is done to erase the normality of Palestinians. The Palesitnian as human is taboo. Just like Jews in Europe in earlier times.

During a pandemic, on the 22th of May, over 180 million people will sit snuggled and turn into cultural critics watching the Eurovision song contest broadcasted from Rotterdam. Popcorn, crisps and beer will be consumed while talking on top of each other commenting on the German song ‘I Don’t Feel Hate’, Romania’s ‘Amnesia’, and the Israeli song.

The Isreali ‘Set Me’ Free’, catchy song sung while refugees from all over Palestine, blocked in Gaza and bombarded from the air, land and sea- is Kafkan. It starts  with “Take a look what we've become” followed by

Tell me not to worry

Everything will be just fine…

The Israeli singer with Ethiopian roots is portrayed officially in her soldier uniform as a good soldier. Israel advertises diversity except for one crucial identity, the taboo that has to be erased. That identity is hidden in the second interval of the Eurovision. During this interval Holland showcases its cutting edge in culture and arts. 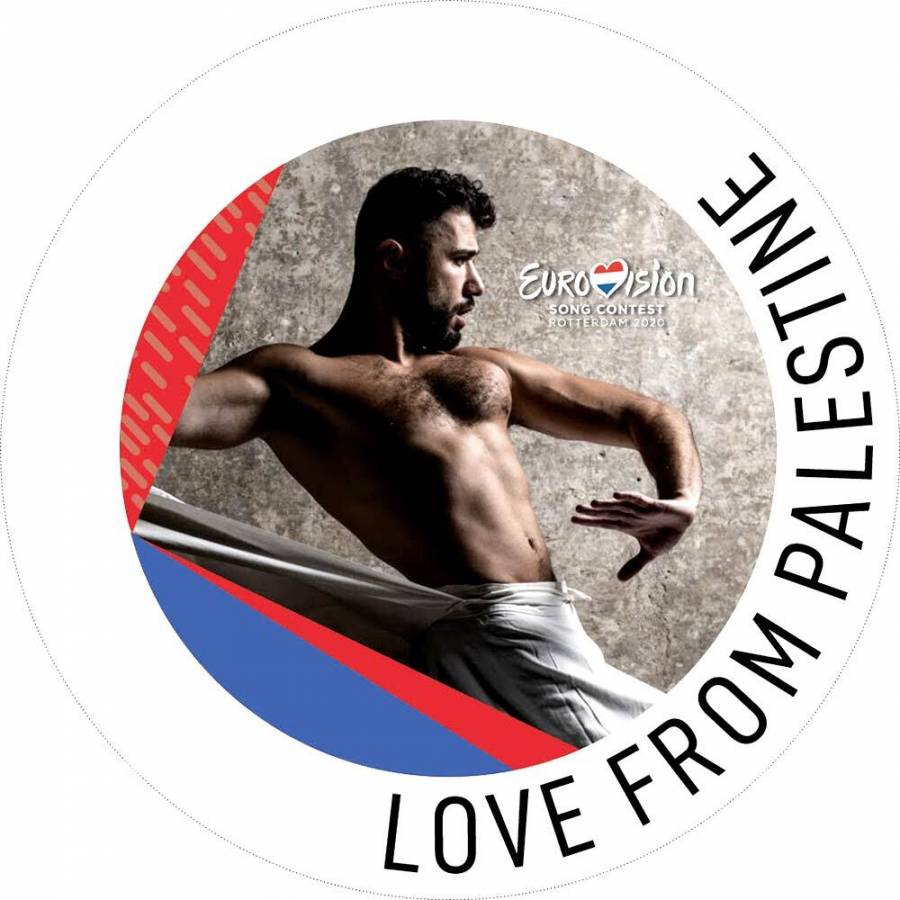 Ahmad Joudeh dancing at the Eurovision's interval. Image made by Maryann Jaraysi. Photograph and its copyright by Jana Romanova

Making the invisible visible is the first step in consciousness. Who can help us forward in untangling this pain? Surprisingly, the old colonial power comes to the rescue. The Dutch entry is represented by a Surinamese man. The Netherlands is awaking, making space for its oppressed not only to speak up, but to represent the land and culture.

The lyrics of “Birth Of A New Age” is how love and consciousness look in public. The song is fit for Holland, Surinam but also for Gaza and Palestine today:

And they poisoned your ground

Your rhythm is rebellion

They burned your heroes at the stake

But your voice will echo all their names

It’s the birth of a new age

They buried your gods

They imprisoned your thoughts

Your rhythm is rebellion

They tried to drain you of your faith

But you are the rage that melts the chains

It’s the birth of a new age

We are the fruit

Of every forgotten revolutionary

We are the birth of a new age

Thank you the Netherlands.

"A Rosy Palestine"... I Hold On to My Right of Return

Covid Vaccination in Palestine: Stuck Between a Rock and a Hard Place