Egypt’s Mr. & Mrs. Mohamed Mahmoud Khalil Museum reopened (yet again) on Sunday April 4th after a decade of closure. The museum is open to the public, with entry free of charge for the month of April.

Minister of Culture Ines Abdel Dayem inaugurated the reopening, describing the museum as “an added value to Egypt’s soft power, and an enrichment of its cultural infrastructure, as it is one of the most important specialised sites in the world due to its rare artistic collection”. This reopening is part of a comprehensive plan to develop artistic and national museums in Egypt and encourage public engagement, though little development seems to be evident beyond opening the institutions to the public.

The opening ceremony was understated compared to the fanfare surrounding the Pharoahs’ Golden Parade and brought together members of the public, as well as a number of ministers, ambassadors, academics, and cultural practitioners.

Little is known about Mr. & Mrs. Mohamed Mahmoud Khalil, the former residents of the palace for whom the museum is named, nor the history of the palace that they once inhabited, save for the reason behind its most recent closure – the theft of a Van Gogh painting.

Mohamed Mahmoud Khalil Bey (1877-1953) was a politician and avid art collector born to an Egyptian father and Greek mother in 1877. He went to the French Lycée school in Cairo and travelled to Paris in 1897 to study law at the Sorbonne University. Upon graduation, he returned to work in politics; he assumed the position of minister of agriculture in 1937 and was appointed to the Egyptian Senate where he became President from May 1938 to September 1942.

Khalil co-founded the Society of Lovers of Fine Arts with Prince Youssef Kamal and became its president between 1924 and 1925, and later became Chairman of the Fine Arts Advisory Committee at the Ministry of Education in 1927. Mohamed Mahmoud Khalil convinced King Fouad of the necessity of establishing a museum of modern art and the king entrusted him with this task.

There are 304 paintings in the museum by 143 artists, and around 50 sculptures by 14 artists. The museum’s rare collection includes a number of works by world renowned artists such as Vincent Van Gogh, Paul Gaugin, Pierre-Auguste Renoir, Claude Monet among others

In 1937, he organised the Egyptian pavilion at the Paris International Fair in which he showcased many works by Egyptian artists of the time. Khalil made significant efforts to enhance the cultural exchange between Egypt and France, and he was elected a member of the French Academy of Fine Arts in 1949 in recognition of his efforts.

Mohamed Mahmoud Khalil met his wife Emilienne Hector Luce (1881-1960) when he was studying in Paris in 1903, and she was a French artist studying music at the Conservatoire. He loved her and she loved art and collecting, and so his passion for her became a passion for arts and the acquisition of artistic treasures.

He married her that same year and they returned to Egypt where they lived in his palace in Giza. Little is known about Emilienne, beyond her modest French upbringing, her brief stint performing in France, and her love of art and fine things. In his research on the Khalils, Samir Raafat quotes Victor Mansour Semeika (who knew them personally) "Emilienne was infinitely fond of frou-frou and trompète attire with an obsession for jewels which she wore for the most trifling occasion!"

Emilienne Luce at home (right), from Hassan Othman’s book Al-Qahira fi Paris (Cairo in Paris). Mohamed Mahmoud Khalil Bey with his wife Emilienne Luce at the opening of an exhibition for the Society of Lovers of Fine Arts.

According to Dr. Khaled Sorour, Head of the Fine Arts Sector, there are 304 paintings in the museum by 143 artists, and around 50 sculptures by 14 artists. The museum’s rare collection includes a number of works by world renowned artists such as Vincent Van Gogh, Paul Gaugin, Pierre-Auguste Renoir, Claude Monet, Henri de Toulouse-Lautrec, Edouard Manet, Berthe Morisot, Auguste Rodin, Edgar Degas, Eugène Delacroix, Peter Paul Rubens, and Franz Xaver Winterhalter, among others.

Holdings also include a number of porcelain vases and pots from France, Turkey, Iran and China in addition to delicate Chinese antiques made of precious stones.

The Khalils’ collection is predominantly an international one, with much fewer works by Egyptian artists. Though the French artworks are often emphasised in terms of the value and importance of the collection, the few works by Egyptian artists are arguably equally significant, including works by Mahmoud Said, Mohamed Hassan, Youssef Kamel, Taher Alemary, Saroukhan, Edmond Sousa, George Sayegh, Afifi, and Said Elsadr.

In Les Modernes D’Egypte, Nadia Radwan describes that Mohamed Mahmoud Khalil Bey was known for his love of caricature and collected several satirical works. A caricature of him by Armenian-Egyptian artist Alexander Saroukhan personifies Khalil’s collecting interests. In it, Mohamed Bey is depicted waving the Egyptian flag, looking towards a gigantic Eiffel Tower. In another caricature by Rakha, Khalil appears dishevelled, in ragged clothes, likely alluding to the fact that he was known to be stingy. 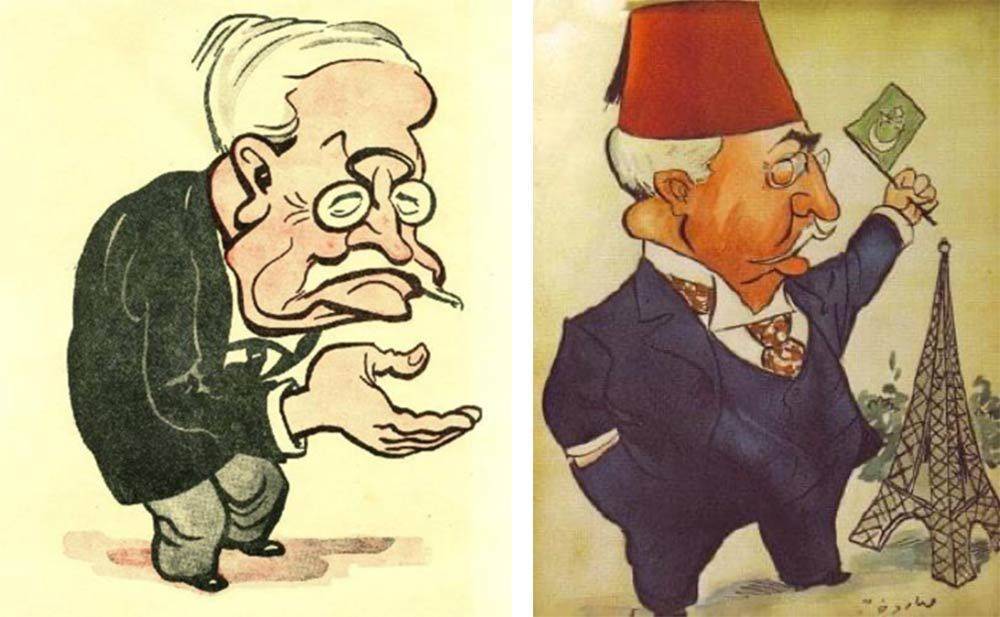 No. 1 Kafour Street Through the Ages

A magnificent art nouveau structure overlooking the Nile, the Mr. & Mrs. Mohamed Mahmoud Khalil Museum at No. 1 Kafour Street was Khalil’s gift to his wife Emilienne, who bestowed the palace and its possessions to the Egyptian government to become a museum of art after her passing.

For those who can’t make it to the museum just yet, a virtual tour is available online via the egyptian government’s Fine Art website

Shortly after Khalil’s death, the ownership of the palace was contested when his second wife came forward with a private marriage contract and a paternity claim. Though the paternity of his child was confirmed, Emilienne retained her bequest.

An article in Al-Ahram, May 1, 1986 announcing the reopening of the museum,construction at the museum circa 1990s, The Khalil residence at 1 Kafour Street (undated)

Abou Ghazi objected to handing it over to the presidency because the museum was established through the former owners’ will; the will had specified that the palace remain the same way the Khalils left it, and therefore Abou Ghazi’s objection was not only to moving the works on display, but out of adherence to the will.

Following a cabinet reshuffle and Abou Ghazi’s subsequent retirement, the museum was evacuated, and works were sent to Prince Amr Ibrahim’s Palace. It was only when Farouk Hosni assumed the portfolio of the ministry of culture that he requested the restoration of the house and returned the works to their rightful place.

A history of re-openings

Since it first opened, the Mr. & Mrs. Mohamed Mahmoud Khalil Museum has seen a series of closures and re-openings, with public announcements leading up to these openings on at least 6 separate occasions. Each time, the reopening is announced as a significant and highly anticipated event and emphasis is placed on the importance of the collection, ‘new’ development works, conservation of the palace and the works on display, as well as a reconsideration of the museum’s curatorial approach to the presentation of works and a rehanging of artworks.

As there is no clear explanation for this history of re-openings and closures, perhaps the ‘curse of the Khalils’ is to blame.

The curse of the Khalils

Based on his research, Mohamed Mahmoud Khalil’s great nephew Hussein A. H. Omar recounts the ‘curse of the Khalils’. Khalil’s grandfather Ibrahim Khalil Pasha was an alcoholic and a problematic character, it is said that his sons wanted to murder him, but that his youngest son Mahmoud refused to participate in this plot and told his father.

When Ibrahim Pasha found out, he disinherited his children, and when he died, his fortune was divided amongst two siblings instead of being divided evenly amongst his many children. The fortune was thought to be cursed, and younger generations grew up thinking that if they took anything from the Khalils, it, too, was cursed. As evidence of this curse, Omar describes that when his great aunt received a painting from Emilienne, the roof of her house fell through.

The Khalils’ palace was the location for the 1963 comedy film El Aydi El Naema (Soft Hands) starring Sabah, Ahmed Mazhar, Salah Zulfikar, Mariam Fakhreddine and Laila Taher, based on a play by Tawfik Al Hakim of the same name. In El Aydi El Naema, Ahmed Mazhar is a disgruntled prince who is struggling to acclimate to post-revolutionary, Nasserist, socialist Egypt.

Little of the film’s storyline references the former residents of the palace, though the title of the film alludes to the type of aristocratic character that has soft hands, for lack of work. The depiction of the prince’s disagreeable character could also perhaps be inspired by them, for according to his great nephew, Mohamed Mahmoud Khalil Bey and his wife Emilienne were both rather unpleasant by all accounts.

There is also a reference to the artistic landscape of Cairo in which this palace and its former owners played a significant role. One of the prince’s daughters, Jehan (Mariam Fakhreddine’s character) is an artist who works for a living. She is commissioned to paint and sells her work regularly for a handsome fee.

Poppy Flowers and the recent reopening

Development work at the museum began in 2014 and included several stages of construction to modernise the museum’s equipment, including ventilation networks and air conditioning, electricity and water systems. Conservation of the works in the collection was carried out, in addition to rehanging and updating the presentation of works. Security measures have been reinforced, through the installation of new camera systems and incorporating global insurance methods adopted by the largest museums in the world. 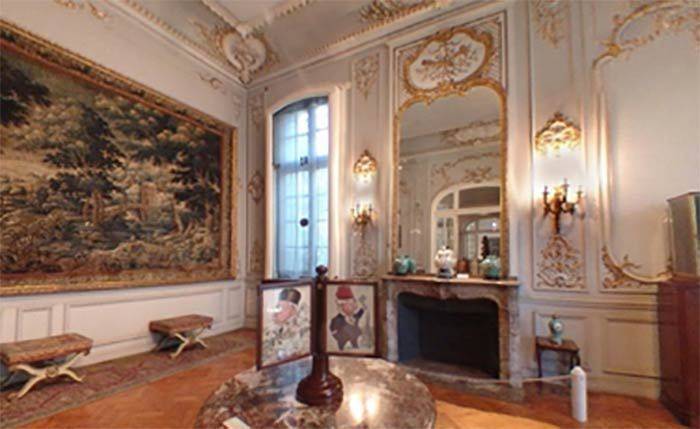 For those who can’t make it to the museum just yet, a virtual tour is available online via the government’s Fine Art website. It is unclear whether this has been updated with new renders of the space and reflects the new conservation and rehanging of the works, but it remains a delightful tour, nonetheless. Visit the Mr & Mrs. Mahmoud Khalil Museum in person if you can, or peruse the beautiful treasures of the Khalils’ collection from the comfort of your own home.