University of Michigan student Kareem Rifai is only 19-years-old, yet has amassed over four thousand Twitter followers and the respect of prominent journalists and advocates worldwide. 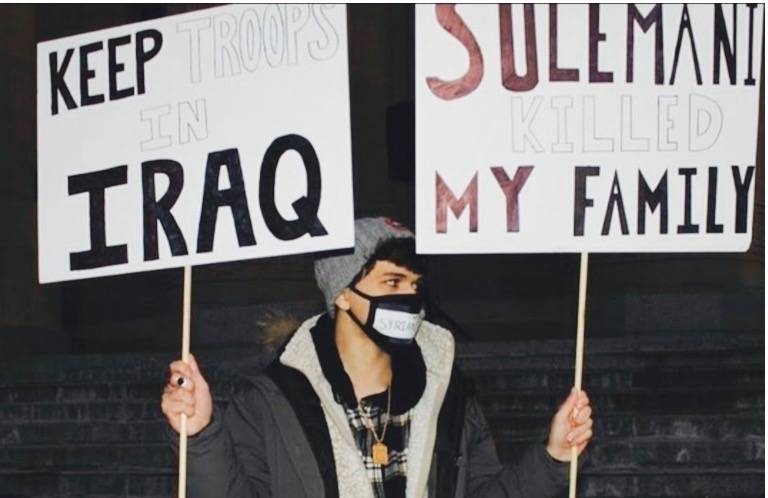 For the longest time the Syrian-American has had a photo of himself wearing a mask with, “the Syrian people” sprawled across it as his profile photo. His mother, Shadia Martini, ran for Michigan state representative this year.

Part of his appeal is how vocal he is on all things politics. As a, “very non-partisan Democrat,” he, “falls on the left for almost every social issue,” he explained.

But he’s not your typical Democrat. He’s led a counter protest at his university supporting the missile attack on Iranian general Qassem Soleimani, when many self-proclaimed leftists might be against foreign intervention. “Soleimani was part of the team of military generals that ordered the bombing that killed multiple members of my family,” he told Michigan’s Booth Newspapers at the time.

He’s also not typical in that he’s a part of the Syrian Americans for Biden organization, yet sympathizes with Syrians who plan to vote for Trump in this upcoming election.

“I don’t judge any Syrian who decides to vote for Trump especially because I really don’t judge a lot of Iranians either. Objectively I believe Trump’s policy towards Iran is better than what Obama’s was and the results are kind of parallel because the Iranian economy is sailing and, you know, their actions in the Middle East are being actively disrupted by Mike Pompeo and Trump,” he said.

Rifai is referring to Syrians who felt betrayed by the Obama administration, which was the administration in which the beginning of and the majority of the Syrian conflict happened. Currently the country is still dealing with the power vacuum that led to the proxy-war, spearheaded by Iranian militants, Russian aerial bombings, and different anti-regime opposition groups.

“There is no military solution,” Obama has repeatedly said about Syria, creating a sinking, hopeless feeling for a number of Syrians, like for 28-year-old Florida native O.A., who wishes to go anonymous to protect his privacy, and has chosen not to vote in this upcoming election.

“Neither candidate has convinced me that they will have a net positive impact on the country and the world. I’m also not convinced by the “lesser of two evils” argument; for one because I don’t believe either is less evil than the other and two because voting on that premise would be rewarding one party for being slightly less disgusting than the other,” O.A. said.

Sixteen-year-old Brooklyn native Abdullah Ghussen actually would vote for Trump if he could.

“I mean both candidates are bad but Trump is the lesser evil in my opinion. He also has a better Syrian policy, for instance the Caesar Act, which put sanctions on people that have ties with the Assad regime was passed under his administration. He also reacted when Assad used chemical weapons in Syria by conducting airstrikes,” he said.

Political analysts have also criticized Obama for the results of non-intervention, but they also place the blame on the other organizations and entities as well. “How the UN Security Council Failed Syria,” “The Muslim world failed Syria long before anyone else did,” “Syria Will Stain Obama's Legacy Forever – Foreign Policy” are just a few of the many articles out there.

But although Rifai feels like Obama made huge mistakes in Syria, he also doesn’t place all the blame on him.

“I think he made a mistake with Syria but I also think it was because of actors in his administration, namely Ben Rhodes, who is far left on foreign policy issues that really kind of shifted him away from, you know, doing what he needed to do in Syria,” he said.

Ben Rhodes definitely had a say in Syria, but that is not the narrative he puts out. In his article in the Atlantic, “Inside the White House During the Syrian 'Red Line' Crisis”, Ben Rhodes explains Obama’s final decisions on Syria. Initially he had support from the UK and France, but the British Parliament voted against intervention. Germany’s Chancellor Angela Merkel told Obama he should not act without UN Security Council approval, and so far Russia has vetoed fourteen resolutions on any intervention in the war-torn country. Even back at home, Congressmen on both sides were not going to stand behind Obama’s request to intervene, remembering the Iraq war and how it tarnished the U.S.’s reputation.

In the end, Obama’s “red line,” turned out to be an invisible line, leaving Syrians like O.A. and Ghussen disillusioned. But Rifai remains hopeful of a Biden presidency because of his role in Syrian Americans for Biden.

“I’m one of the digital directors, and we have multiple Syrians in high-level positions in the potential Biden administration already, on his team, advising on policy. We’ve completely infiltrated it.” He added that because he believes Biden is going to win anyways, and that his work and other Syrians’ work as well will pay off for his native country.

Can Kuwait Play A Role in The Rapidly Developing American Iranian War ?

The Quran says “there is no compulsion in religion.” So why are Muslim societies obsessed with atheism and apostasy?