A classically rich and romantic acapella recitation for his poem U7ibbuki U7ibbuki wal-Baqiya Ta2ti (I Love You, I Love You & the rest will come) is plucked from the technicolor annals of history, instead soundtracking a yacht party with lush Harp plucks and afro-Latin rhythms. On board are Syrian-American captains Omar Offendum on the mic and Thanks Joey on the boards, along with constituents of LA’s rich cultural tapestry, and the ship is heading to a new and reimagined utopic pacific wonderland, Los Shamgeles, blasting I Love You by the Shamreeki duo. 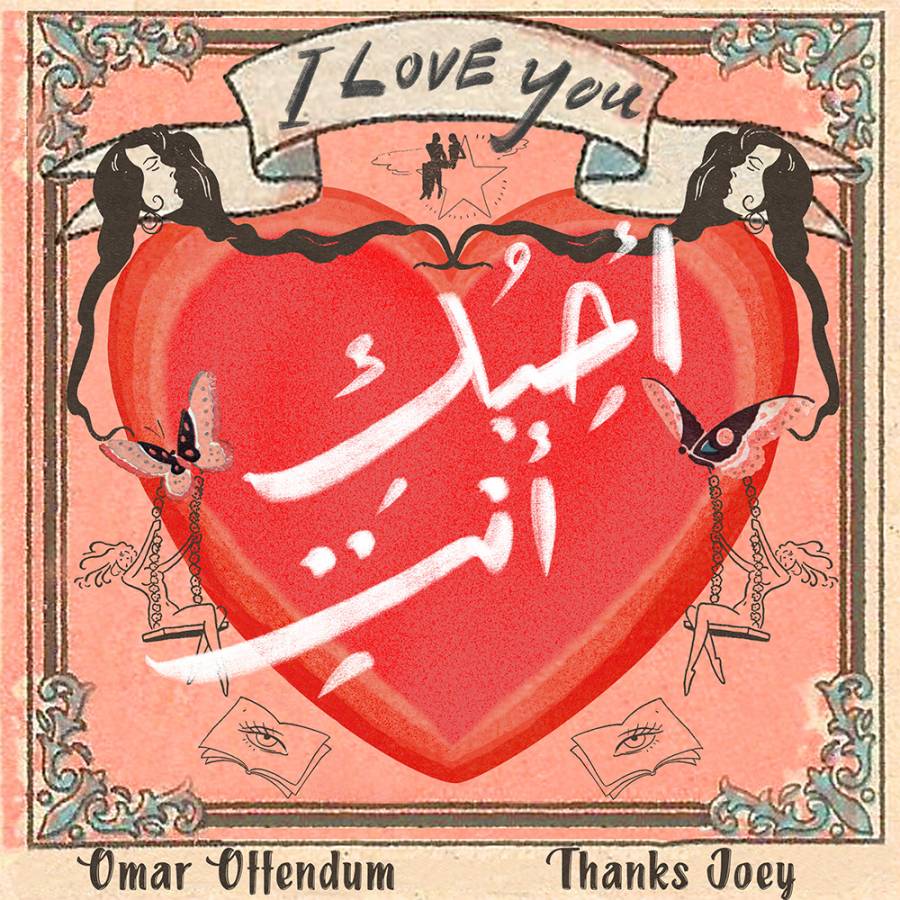 The Power of Kismet and Qahwa

Omar Offendum’s second full length Studio album, Lost In Translation, was ideated through a mixture of kismet and qahwa months before the world descended into a global lockdown, and through two immigration inflection points; Offendum’s own relocation to Los Angeles in 2004 as well as the wave of Syrian immigration to Southern California which began over a hundred years ago.

Omar Offendum’s full length Studio album, "Lost In Translation", was ideated through a mixture of kismet and qahwa, and through Offendum’s own relocation to Los Angeles, as well as the wave of Syrian immigration to Southern California which began over a century ago

In Offendum’s professional and personal capacity, he has graced stages across the Arab world, the US and beyond, drawing on storytelling traditions of hakawatis and hip-hop MCs and poets, blending English and Arabic.

But it wasn’t until 2015 that a series of events ended up uniting Thanks Joey and Omar Offendum. Joey and his wife Dima watched Offendum, Iraqi-Canadian rapper Narcy, and Syrian multimedia artist Ridwan Adhami perform at an Islamic Relief USA fundraiser in Arlington, Virginia. Offendum and Joey had appreciated each other’s art, but album collaborator Narcy made the introduction and from there, Offendum told me over a video interview, “the rest was history.”

The rest has indeed revolved around history, particularly entanglements of Syrian history. Between 2018-2019, Offendum was a Kennedy Center Citizen Artist fellow and put together an invigorating spoken word and music project titled “Little Syria”, taking audience-goers on a sonic and educational tour of early 1900s lower Manhattan as it experienced the first ever wave of Syrian migration to the United States.

Offendum enlisted expert Palestinian-American multi-instrumentalist Ronnie Malley on Oud and beatsmith Thanks Joey to soundtrack the performance, as Offendum stoically delivered verses and diatribes as a self-styled “braggadocious Hakawati”, complete with a pencil moustache, tarboush and cane that would make any Syrian 3amo proud.

The performance marked a major maturation point in Offendum’s own musical journey. Little Syria brought together elements of Offendum’s identity like his expertise in architecture, his fascination with the diasporic movements and contributions of Syrians and his uncanny ability to transport audiences through his words.

The Nostalgia in L.A Atmosphere

Offendum to Raseef22: For Syrians, there is a strange sort of nostalgia that happens where you're connected to. It's the weather. It's the vegetation. It's the scenery. It's the pace of life. It's the way that the city was even built

Lost in Translation, set in Los Shamgeles, builds on Offendum’s growth as an artist, illustrating how his new ecosystem links the past and future legacies of Syrians and Syrian Americans, built on top of Thanks Joey’s infrastructural soundscape. In Los Angeles, Offendum sees the past, enjoys the present and escapes to the future.

“For Syrians, there is this strange sort of nostalgia that happens here where you're connected to LA in this sort of like atmospheric way. It's the weather. It's the vegetation. It's the scenery. It's the pace of life. It's the way that the city was even built,” Offendum said. Joey, who moved to Los Angeles to continue to operate his record label Colours of The Culture in 2019, already feels at home.

Throughout our conversation, Offendum referenced a book titled Arab Routes: Pathways to Syrian California by Sarah Gaultieri, which illuminates in depth the lineages and contributions of Syrians in SoCal. Specifically, the book references the 1936 Pacific Syrian-American Guide, a business directory of the thousands of Syrians who had settled in Southern California, put together by the community. 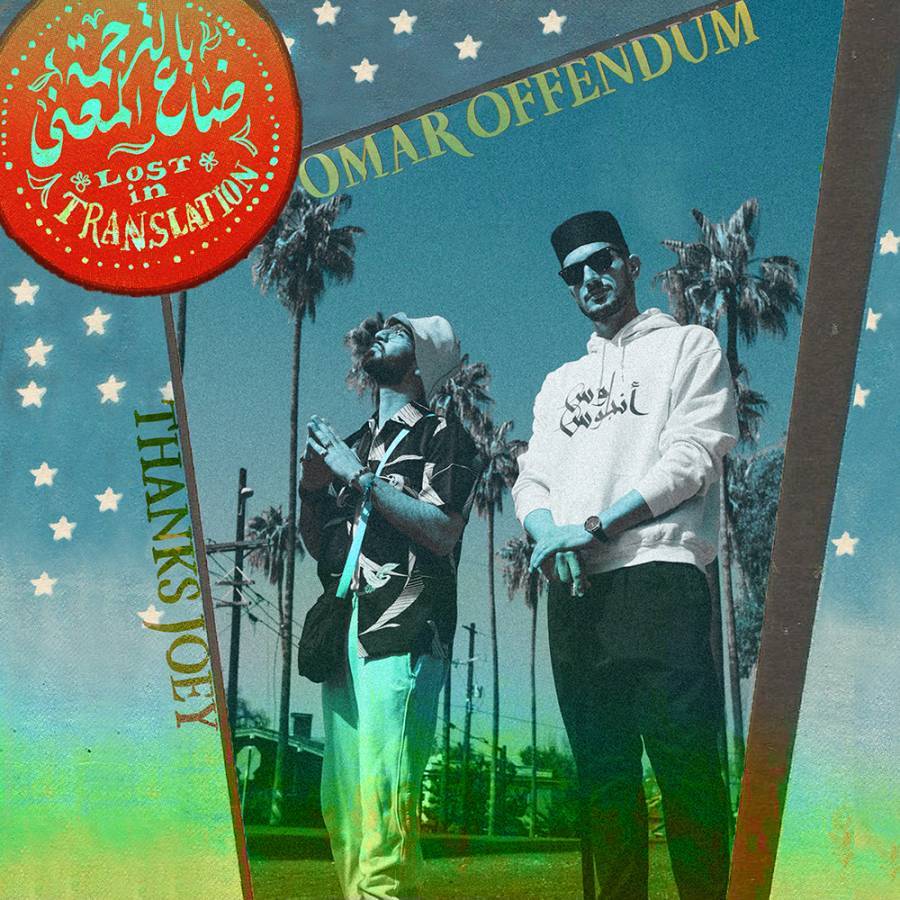 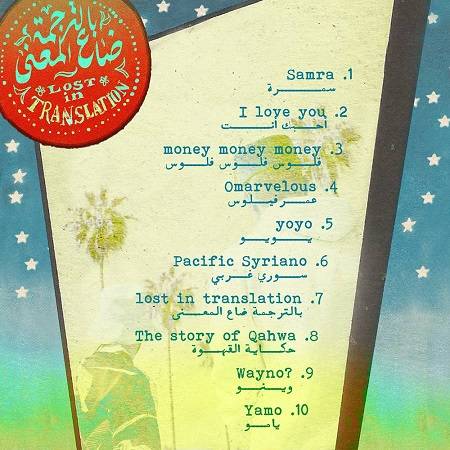 That historical plunge, along with Offendum and Joey’s thorough lacing of comedic snippets from Duraid Lahham’s movies, animate much of the lyrical content and song titles. On “Pacific Syriano”, the song erupts with pitched down and delayed Spanish guitar and strings samples and audio of Ghawwar stumbling around asking “you speak English?”, then joking in Arabic, that he doesn’t speak a word of 3raby.

Offendum proceeds to rap in English and Arabic honoring the smells, sounds, mountains and oceans marking Southern California. His two verses sandwich a feature from NIKO IS, a close Brazilian-American collaborator of Thanks Joey, who effortlessly flips and glides in English and Spanish, exclaiming “understanding body language can turn strangers to hermanos.”

Throughout the album, Joey and Offendum’s chemistry is seamless and highly experimental: “I always wanted to explore. And I never had the opportunity to do it because there wasn't anybody that shared that same sentiment, that culture, that understanding until I met Offendum. It was really kismet, really destiny.” Joey told me over Zoom.

Behind Joey are two old Arabic movie posters, one of “Tha3lab” (aka Fox) & the other is “Samak Bala Hasak” (fish with no spines/bones). Joey informed me that after ordering the prints from a reseller in Beirut, the shop-owner found out Joey was Syrian and threw in a Ghawwar movie booklet for the film “A Trick (Heist) in Mexico,” which followed a clumsy crew of Arabs attempting to speak Spanish and solve crime along the Mexican pacific coast.

When Joey revisited the "Pacific Syriano" instrumental, he realized that the movie booklet he had been gifted was the exact soundtrack he had sampled, and the photo even matched interactions he had sampled. Offendum connected the Ghawwar movie with Syrian migration through Mexico in the 1900s, and said that in LA he appreciates the bridges between Arab and Latinx cultures and communities. The album’s artwork, designed by Dubai based Yahala Studio (Palestinian) and calligrapher Hussein Alazaat (Syrian), reflects the cinematic, blocky Arabized graphics that Joey and Offendum drew inspiration from.

That historical plunge, along with Offendum and Joey’s thorough lacing of comedic snippets from Duraid Lahham’s movies and Nizar Qabbani's poetry, animate much of the lyrical content and song titles

The song features lyrics praising his mother, his daughter Ella Salam and Arab women of all shades in between, carried by Joey's euphoric instrumental bounce and Offendum’s harmonies. Another cosmic realization the duo had was that one of the samples they drew for Samra was from Samak Bala Hasak, while the film’s poster quietly lurked behind Joey for years. 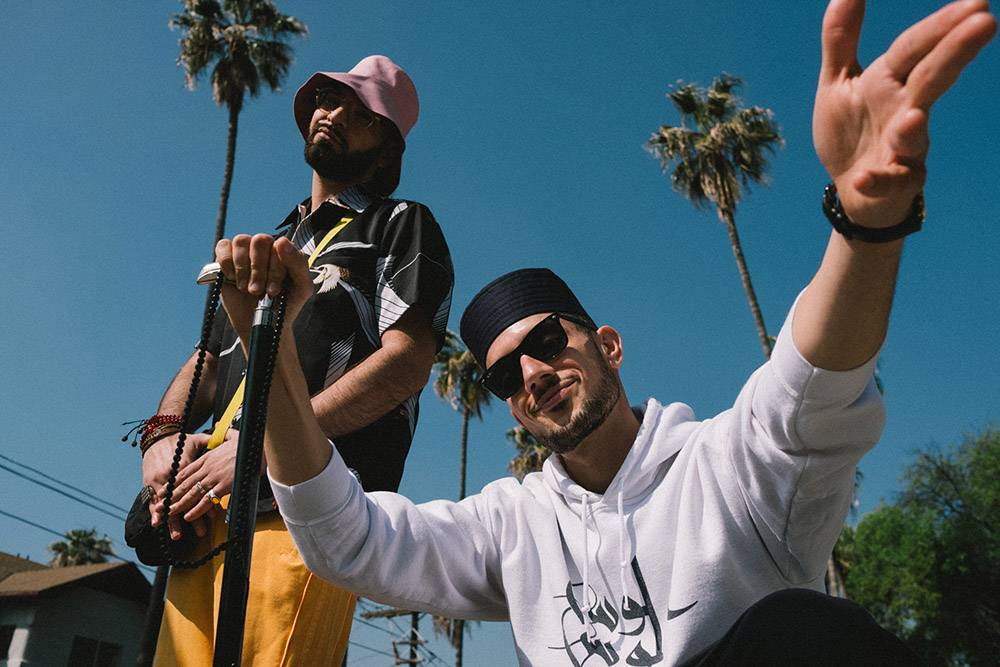 Other songs serve to bring the listener closer into Offendum’s life in Los Shamgeles than ever before. The title track, Lost In Translation, is a playful story of how he and his wife, actress Ashley Dyke met in college in Virginia. With confidence, Offendum takes listeners though their initial awkward but undeniably magnetic tango, ruminating on later familial frictions around interracial, interfaith marriage.

Joey to Raseef22: I never had the opportunity to explore because there wasn't anybody that shared that same sentiment, that culture, that understanding until I met Offendum. It was really kismet, really destiny

Throughout the album, Joey’s beats provide the cultural references and melodic backbone for Offendum to truly lose himself in translation. The track Omarvelous is reminiscent of a WWE wrestler entrance theme song, boisterous like Busta Rhymes and the Flipmode Squad, with Offendum lobbing lines like: “You prefer my old shit /well I ask, How am I supposed to grow? /Let it go, shoutout to Joey though/ More dynamic of a Shami duo nobody is ever really going to know.”

“I’m excited about the tempos and styles that we're sort of exploring here between Joey's beats, my vocals, I think it's got a little something for everybody,” Offendum told me. Ultimately the references to Syrian comedy are layered and intentional: “I hope that this album doesn't just speak to Syrian Americans, but it speaks to all the Syrians abroad—this generation of Syrians have held the weight of the war.” Offendum said.

“I was lucky to have a different connection to Syria as a kid, but I think we're all longing for more meaningful connections with nostalgia. It's going to be heavy for many of us, so we were hoping we could tap into the lightness of Syrian humor.” Offendum added. On Lost in Translation, Offendum also flexes with more bars in Arabic than on previous projects.

Much of his life work has been incorporating creative traditions from Syria and educating masses, whether in the Damascus Room at the LACMA, or partnering with local artisans and organizations for social good. What feels different on Lost In Translation is the renewed focus his partnership with Thanks Joey has yielded, along with his deliberate articulation of the borderless realm and hybrid identity he is proud to embody; being Shamreeki in Los Shamgeles.

For Lost in Translation, the real test was if Offendum came home and the kids danced to the music. “Every single one was a surefire hit,” Offendum said.

In the midst of a global pandemic and national uprising across the U.S, Offendum and Joey communicate a radically informed, socio-cultural imaginary which will leave you thinking about the etymology of coffee and palm trees through rose water-tinted lenses.

Listeners can head to the Colours of the Culture website to purchase a digital, mp3 version of the album, and can also tune into an intimate album launch party with the Arab American National Museum at 8:00 PM on September 24th.

The "Lost in translation" project features samples from many classic Syrian films and TV series courtesy of Shamra (ig. handle: Khaled almaleh). Founded by pioneering Damascene director/producer Khaldoun Almaleh. Shamra was responsible for some of the most iconic and award-winning Syrian productions of the 20th century.

What Would Ancient Egyptian Music Sound Like, If We Could Hear It?

"Quench Our Thirst"... A lyrical song, the climate crisis and Arab revolutions