A law passed by a presidential decree in 2012 transformed tens of thousands of Syrian government employees into unemployment. These employees did not get their full wages nor end-of-service benefits, and more importantly, they were stigmatised and labelled  "terrorists".

Although the article itself is linked to the application of an earlier judicial judgment, other powers granted to the prime minister, through another legal article, permitted him to end the employees's service. Additionally, these powers allowed the prime minister to enforce certain punishments (of possible political nature) that are not legally justifiable targeting citizens or even entire regions.

Consequently, the 56-year old principal of the Naba’a Al-Sakhr School in the Quneitra Governorate, Mohammed Mutlaq Al-Dali, was surprised to see that he was dismissed after 33 years of service. A decision was issued on June 22, 2017 by the former prime minister, Imad Khamis, to dismiss him from his service and suspend his pension.

Al-Dali, whose dismissal by an administrative decision was in clear violation of the executive authority over the judiciary authority, remained at work during the period of the governorate’s exit from the control of the government between 2014-2018. Despite the fact that the Human Resources department in the Quneitra Education Directorate had confirmed Al-Dali’s commitment to his job (during the period of 2014-2018) through formal communication with the Ministry of Education, his dismissal was not reviewed. This forced him to file a lawsuit in court, which has not been resolved to this day.

According to an unnamed source in the Department of State Cases, the number of employee dismissal cases filed in the administrative judiciary have reached about 40,000. That is, there are 40,000 former employees of the state who are awaiting justice, after the government branded them "terrorists". 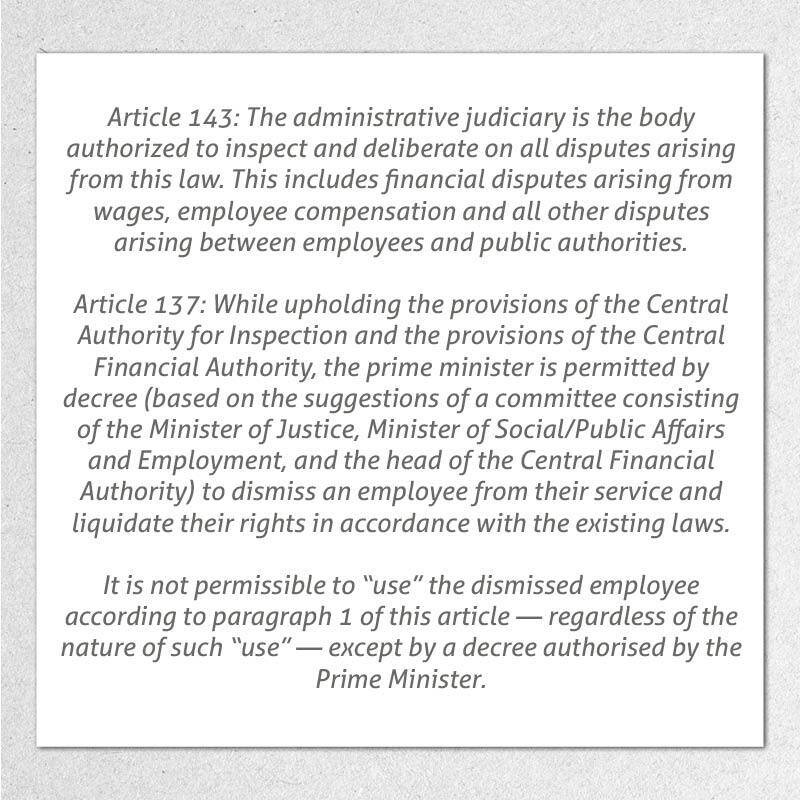 This investigation indicates that the Prime Minister is in violation of various provisions based on the Syrian constitution and Labor Laws. This violation is a consequence of the unlawful dismissal and termination of employees which have been denied their pensions and compensation. Additionally, lawsuits filed against some employees for unlawfully leaving employment have led to the displacement of thousands of employees without a source of income or livelihood. 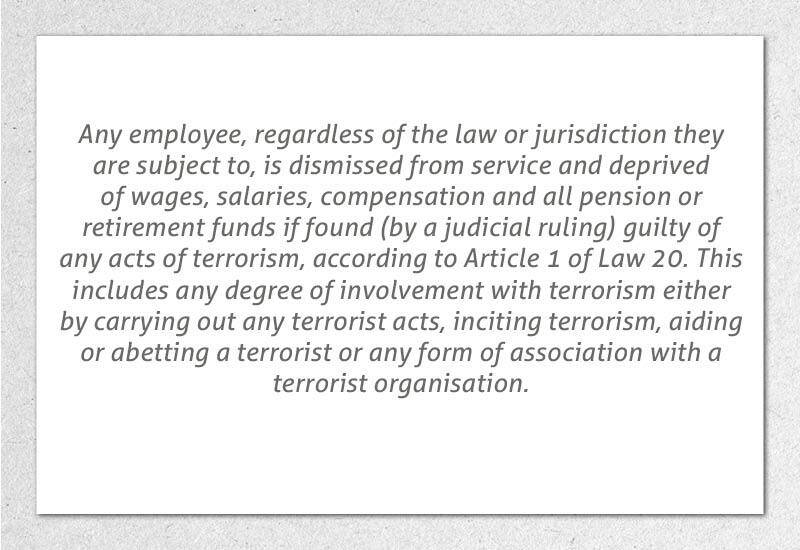 MP Muhammad Khair al-Akkam has insisted that Article 1 of Law 20 has been overused since the beginning of the war in Syria. Al-Akkam has called for the referral of dismissed employees to the relevant and appropriate courts instead.

Huda Al-Sawaf, head of the State Cases Department, insists that "those dismissed from service, particularly those who were in the besieged areas, obtained judicial rulings enabling them to return to their work and recover their financial dues in accordance with the Law.”

On the other hand, Sawaf indicated that those that left their jobs as a result of the turbulent events that took place have returned to employment. However, those who travelled abroad or fled were dismissed from service and sentenced to one month in prison. Sawaf was also quick to acknowledge that there may have been potential injustices enacted upon the employees in the besieged areas.

"After serving for 33 years, I became a terrorist!"... the number of employee dismissal cases filed in the administrative judiciary have reached about 40,000. That is, there are 40,000 former employees of the state who are awaiting justice, after the government branded them "terrorists".

According to the director of the Labor Legislation Department at the Ministry of Administrative Development, Ghiath Fatoum, the dismissals were of a “political” nature. Fatoum has expressed the following:

The employees are dismissed without disclosing the causes for dismissal and can only be reinstated by a decision signed by the Prime Minister. This deprives employees of their right to work for the public service without legal justification.

Therefore, the decision to dismiss employees in this manner is arbitrary and unjustified. Further, this is contrary to the procedural administrative decisions, according to legal advisor Bashir Ezz al-Din. This issue is a clear violation of the constitution, as Ezz al-Din indicates that linking the reappointment of an employee to the approval of the Prime Minister is a denial of the constitutional right that affirms that all citizens are given equal employment opportunities in public service, as stated in Article 26.

Al-Dali’s continued work during the years of the armed factions’ control of his Governorate (Quneitra) was with the approval of the security committee and the Governor, as he asked all teachers in the Governorate to continue working.

Al-Dali explains that, just like him, about 70 teachers in the same Governorate were dismissed from service. The reason for his dismissal is due to malicious reports by affiliates of certain political parties (i.e. affiliates of the ruling Baath Party in Syria) accusing him of carrying out acts against the state, and belonging to a terrorist organisation. Subsequently, Al-Dali was referred to the Criminal Court. "After 33 years of service, I became a terrorist!" he says sarcastically as he awaits a verdict on his case.

Today Al-Dali relies on agricultural work which is “not lucrative” (according to him) to obtain a modest income to spend on his eight children. The fact that his children are still in education has placed immense financial burden beyond Al-Dali’s capacity. 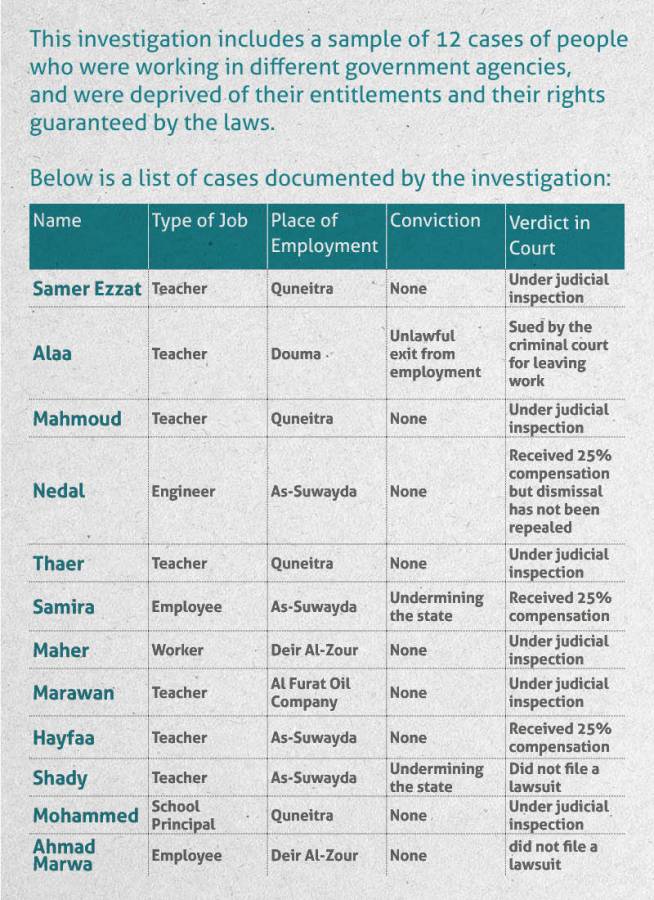 Under the accusation of “unlawfully abandoning employment”, Alaa, a 50-year old teacher Alaa from Douma, was dismissed from his service and transferred to a Criminal Court despite the fact that he did not actually quit his job.

Douma had fallen under the control of the “Islamic Army” and was besieged for three years. During this time, Alaa did not leave the city once to collect his salary out of fear of being arrested. After the Syrian army regained the city, he went to the Damascus Education Directorate to collect his salary for those years, only to be surprised by the decision to dismiss him.

The crime of abandoning work  is regulated by Article 364 of Syria's Penal Code. 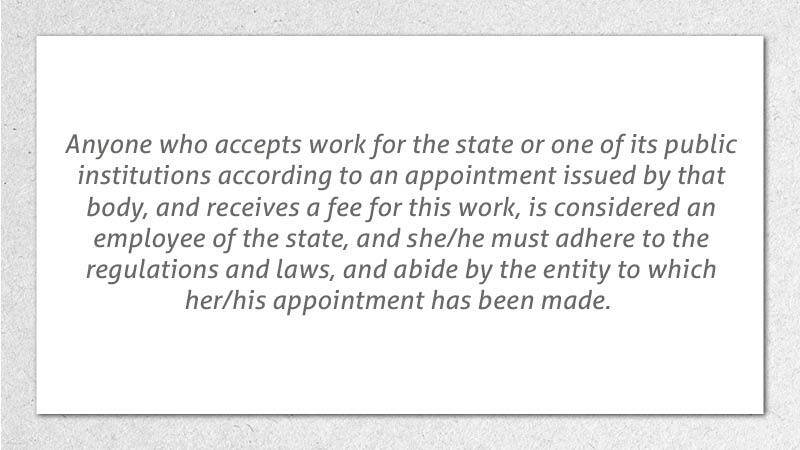 The Law outlines a punishment of three to five years of imprisonment, and a fine of no less than the employee’s monthly salary with a full year's compensation for those that leave their work in the public sector before obtaining an accepted resignation. The Law also applies to those that have been deemed “technically resigned” due to absence from work (for a duration of 15 days or more).

Some of those affected by these decisions have resorted to Parliament to submit their complaints. However, since 2016 the number of these complaints has not exceeded 31, and have focused on returning to work and reversing the dismissals. It is assumed that a committee will follow up the complaints with the government and with the appropriate administrative authority headed by the chairman, Abboud Al-Shawakh.

However, according to the head of the complaints office, Nabil Naji, "there was no response to these complaints, in terms of rehiring or compensating the employees." Further, Naji claims that "there are those who come to us with a judicial decision that allows the employee to return to work, however it is not implemented. At this point, we request the implementation of the decision from the cabinet or on behalf of the employee. Subsequently, the decision is implemented."

Lawyer Reda Haidar attributes the low number of complaints submitted to the Parliament to a "lack of confidence" in him, as most people know that there is no result from the complaint.

Dismissal from service was not restricted to employees in areas of conflict or besieged Governorates.

Samira Nofal, 53, employee of the Land Reclamation Directorate in Sweida, was dismissed from service after 28 years of government work, on charges of "weakening the national feeling, undermining the state's prestige, and weakening the psyche of the nation.”

Nofal indicates “the decision did not provide a clear reason for dismissal, but the administrative court’s decision stipulated these charges.” Nofal filed a lawsuit with the Administrative Court in Suwayda, and obtained a ruling to reverse the charges against her and return to her previous employment, while compensating her with 25% of the value of her salary for the period during which she was suspended from work.

However, the Department of State Cases appealed the decision and transferred her case to the Administrative Court in Damascus. The verdict confirmed Nofal’s compensation for her pension entitlements, but this decision was not upheld by her employer as they refused to implement the judicial decision.

A Ruling People's Assembly member expresses his annoyance at charges such as those brought against Samira, and the way in which the file “dismissal from service” is administered, which “should be managed through the competent judiciary only, and not through the Prime Minister.” He stressed that the government must respect the rule of law, the principle Dismissal of powers, and the enforcement of concluded judicial decisions.

Many questions raised by this investigation got an official answer saying: “Those who are dismissed are armed and have security issues.” This response contradicts the reality of all the cases documented by the investigation

Member of Parliament Akam expressed his annoyance at charges such as those brought against Nofal, and the way in which the case “dismissal from service” is administered, which “should be managed through the appropriate authority, and not through the Prime Minister.” He stressed that the government must respect the rule of law, the principle of segregation of powers, and enforce the decisions of the appropriate judicial authority.

Lawyer Haydar stresses that "the failure to pay pension entitlements upon the decision to dismiss an employee is against the law." Additionally, those that fail to pay pensions are actively abusing their position of power and it is within the dismissed employee’s right to file a lawsuit against them. Further, this violation may incur a criminal penalty and imprisonment.

However, evidence suggests that none of the dismissed employees filed lawsuits of this kind against any officials, with the exception of Nofal, who specifically accused her manager and the Minister of Agriculture. The outcome of the lawsuit was known in advance, as she was aware that it would not affect the change in the results of her case and the accused parties were not imprisoned.

MP Akam suggests that Article 137 has been misused and employees have been dismissed for reasons unrelated to their performance. Further, he indicates that even if an employee is guilty of an offence, they must be referred to the appropriate judiciary, and not the executive authority, to rule on his matter, which is the case today.

As for Legal Adviser Ezz El-Din, he believes that in order to achieve justice for those dismissed, certain amendments must be made. Specifically, amending the "unconstitutional" text in Article 137, "which deprives the judiciary of extending its control over the public administration." However, according to Ezz El-Din, this requires "boldness" from the State Council.

This investigation has raised many questions which have been addressed to the government. However, for two months, its press office refused to refer this investigation to the persons authorised to respond.

The response from Morshed Molouk to settle the issue was that "all of those dismissed are armed and have security cases raised against them.” However, this clearly contradicts the reality of all the cases documented by the investigation.

As for the Ministry of Education, the largest government agency to have subjected its employees to dismissals, declined to answer our questions. Further, the Minister of Education, Imad Al-Azab, justified this by claiming "the information within the questions presented are confidential and cannot be published. The dismissals conducted are also of a confidential nature that should not be published."

This report was completed with the support and supervision of ARIJ, Arab Reporters for Investigative Journalism.

Death From Human Waste in Syria’s Hospitals: an Investigation

"Where Will I Give Birth?" Documenting Stories of Syrian Women Besieged by Coronavirus