Despite all the regularly held seminars of human rights organization and the efforts exerted by Morocco to integrate African immigrants, the issue of anti-African sentiment in Morocco is present, mostly because Moroccan culture is at a distance from its African counterparts in addition to the lack of policy in public institutions that would lead to lessening this cultural gap.

Recently, a sign posted on the front of an agency of the French bus company (CTM) sparked heated debate on social media. This sign prohibits the sale of any travel tickets to Morocco’s border cities to any "African" without first checking their residence papers or passport. After being subjected to criticism, CTM evaded responsibility by directing the blame at one of its employees. 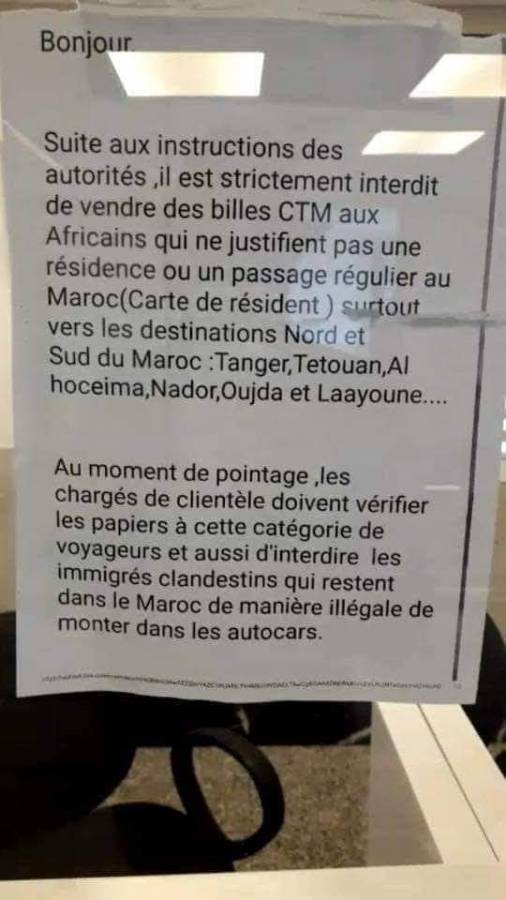 It’s impossible that an employee would stick up such a sign on company premises without knowledge of the company or at the very least his managers. Surely, the responsibility for such a sign is a state security issue since the state is now attempting to curb the numbers of migrants coming from Africa and heading to Europe and is using all possible methods to do so.

Among these methods are security forces that have been deployed in the forests that are near border areas, and also the fire that broke out in the Oulad Ziane bus station near the area where migrants camp out. Much remains unanswered about that accident, not to mention the incidents of violence and retaliatory violence between Moroccans and migrants that we constantly hear about.

In #Morocco, a bus company posted a banner prohibiting the sale of tickets to "Africans" without valid documents; A clear denial of Morocco's location, a breach of signed migration treaties, and outright racism against darker skinned humans

In #Morocco, the issue is deeper than racism against immigrants, the problem is the state is unable to find real solutions to manage migration, so it resorts to stripping migrants of their right of movement and travel.

The issue is deeper than racism against immigrants, the real problem is that the state is unable to find real solutions to manage the problem of migration, and tries to remedy this failure through a weak security approach that at most can only strip migrants on Moroccan territory of their right of movement and travel.

It is possible to find excuses for officials if it were a new issue that has not arisen before. Migration and asylum have been one of the most important topics addressed by King Mohammed VI since he ascended the throne, and has been included in a list of five human rights reforms. To respect human rights, especially that of refugees, and encourage orderly migration.

Morocco is a signatory to several international conventions on migration, the latest of which was the Global Migration Charter adopted in Marrakech, which provides for "mitigating risks faced by migrants through respecting their rights and providing them with the necessary care, and renouncing violence and hatred."

Isn't the banner posted by CTM, whoever is responsible for it, a clear violation of the requirements of all the agreements signed, and challenges the ideas of the immigration conference organized in Morocco and attended by world leaders?

And what is the use of all these resources deployed to remedy the issue of migration if until now we are incapable of finding a viable security and social approach for the integration of migrants from Africa?

On the other hand, we note that the bus company deliberately used the term "African" thinking that it avoided falling into the trap of racism, since the term is not based on the difference of colour, religion or language ..., this common mistake amplified by some national newspapers, somehow implies that Moroccans are not “African”, this denial of identity is the worst racism in my opinion.

But it seems that some Moroccans, because of their long-term aspiration to enter the European Union and the ease of their coexistence with tourists from Europe, have forgotten or deliberately decided to forget that they geographically belong to the African continent, even if they are culturally distant from the rest of its population. But neither our different skin colour, nor our different language and religion can erase the truth of our origins and connections.

Instead of trying to address migration to Europe by banning travel, the state and civil society should understand that the real problem posed by is a social one, which must be fought by reducing cultural divisions and raising community awareness of the need to coexist in our African world, instead of perpetuating this difference by discriminating based on skin colour.

"A Child, Not A Bride": On Morocco’s Rising Numbers of Child Brides

Who Governs Morocco? On Pluralism and the Monarchy’s Struggle for Influence