Downtown Beirut. The pulse of the street is different on the ninth day of the revolution. The tread of the revolutionaries is heavier, they no longer succumb to gravity, they are leaping, dancing, sitting and bowing. They tread steadily, confidently, carrying bodies in which doubts began to creep in, however they are more confident than ever in their revolution.

The energy present is of all varieties. Some faces and features are blank, we console each other with our eyes, repeating slogans senselessly as we exit in shifts from the square to sit down and roll cigarettes meditatively on the stairs that connect Martyr’s Square with Mohamed Al- Amin mosque.

After many failed attempts to catch the phoenix that soars above the squares of Lebanon, bringing hope for a new era. The Sayyed (Nasrallah) has decided to joined the hunters of the phoenix. The game has heated up regionally and internationally. Who will capture this legendary bird that has appeared in the skies of Lebanon, and fling it into a cage, and display it in his backyard?

Political void, chaos, civil war, party funding, CIA agents, Mossad, Nasrallah the Secretary General of Hezbollah has joined the Hunger Games and dragged with him, agents, spies, infiltrators of different camps, for according to the information and particulars that have reached him, as he mentioned in his speech, according to him this spontaneous popular movement has been infiltrated by enemies of the state, and because of his great concern for the people and the country, he is alerting us to this, to the unknown, of the hands sullied by blood, demanding that his public withdraws from the squares of revolt because they are alarming…

There were those who withdrew and those who stayed.

We smoke in silence, we contemplate the state of the martyrs in its contemporary form: a hand with an iron fist printed on a giant platform with the words “revolution”. You feel like the middle finger wants to extend and outstretch itself in the face of the authority, its representatives and parties.

Sharing the same energy, we all feel connected. Our voices are one, our national anthem became the birthday song of this unknown woman and all the unknown women, men and children participating in the revolution. #Lebanon

What does #Nasrallah want from us? That we suspect each other in the Squares? That we accuse each other of treason? To divide our ranks so we can be re-controlled? Is the woman who gave me cake an intelligence agent? Am I just a puppet in Israeli hands?

Let’s assume there are attempts to push the Revolution in another direction and that behind these attempts are American, Israeli and regional intelligence services and let’s assume that we are playing with fire. What are you doing for us, #Nasrallah?

We listen to thunderous chants that stand up to the policy of fear, it tries to consolidate the feelings of the revolutionaries from different streets and to recycle their determination, reassuring them that there are no spies amongst them or spies behind them or ahead of them. The challenge now is to overcome the barrier of “the fear of the other”. A barrier fortified by the words of Nasrallah with the force of his dark words. Words that attempted to obscure the uniting rainbow that shone on all citizens, even those who support Hezbollah, their resistance and their weapons.

We smoke more cigarettes, a cake with a lit candle appears, held by a woman in her forties. Friends started singing “Happy Birthday” and were joined by voices from different levels of the Mosque stairs.

None of us knows this cheerful woman in the square, but the contagion spreads quickly between us. The only thing that needs to happen for us to feel closer to one another is to share the same joy. That our voices are one and our anthem becomes the birthday song of this unknown woman and all the unknown women participating in the revolution and their children, husbands, and unknown parents.

My friends share the piece of cake, passing it on till it reached a woman sitting near me. She took the small piece of cake in her soft hands and broke off a piece and offered to me saying in English “Do you want a piece of cake?” so I took it, smiled at her and put it in my mouth, at that moment we regained consciousness. 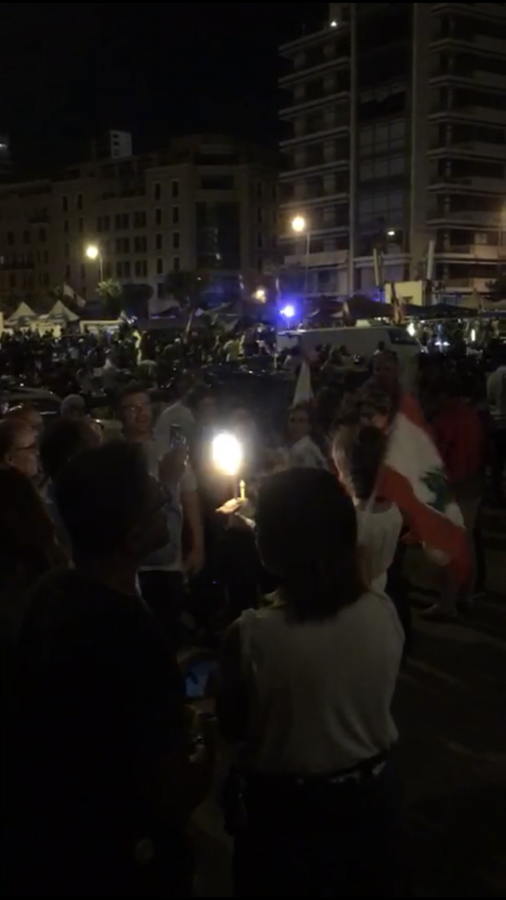 What does Nasrallah want from us? That we suspect each other in the Squares? That we accuse each other of treason? To divide our ranks so we can be re-controlled? Is the woman who gave me the cake an intelligence agent? Am I just a puppet in Israeli hands? Have I turned into an unwitting agent unconsciously contributing to the destruction of my country and possibly a brewing civil war? Have we become the enemies of the supporters of Hezbollah all over the country?

How easy it is, we’ve seen this before and it lacks creativity.

Let’s assume politically that there could be a number of attempts to push the Revolution in another direction and let’s assume that behind these attempts are American, Israeli and regional intelligence services and let’s assume that we are playing with fire. What are you doing for us, Nasrallah? Is flinging the revolutionaries into the fire the solution to keep it away from you? Does the unknown frighten you so you threaten us with the void? Do you doubt every free person in the square so you turn the square into a playground for intelligence services.

Maybe we have entered a new era without anyone’s permission or blessing. Maybe Nasrallah’s fear-mongering speech has no value in the city of the future. Maybe the supporters of Nasrallah- women, children, young men and parents of martyrs that joined the squares of freedom have only withdrawn physically but their minds and spirits remain with the revolutionaries. Because if you have tasted the incomparable taste of freedom, the taste of obedience becomes very bitter. Maybe the revolution has been felled by the masters and it’s too late. Maybe the revolutionaries are the ones looking far into the distance.

If we go back in time 40 years and contemplate the events of the Iranian revolution that is so cherished by Hezbollah and which has put him in the position of power that he is in today, we note that there was a power vacuum threatening the Iranian republic at the time but this did not dampen the determination of the revolutionaries. We also see that the number of revolutionaries did not predict the sustainability of the revolution, rather their voices were enraged at despots accused with colluding with American agencies, regardless of how true this was, these accusations were levelled at everyone even the founder of the Islamic Republic of Iran Ruhollah Khomeini and despite the fears, allegations and infiltrations the revolution continued until the fall of the Shah’s rule, whom the people considered an oppressive tyrant and a slayer of the people with his “foreign” agendas.