The October 25 protests were expected to be calm, orderly and free of friction between Iraqi security forces and protesters, but since Friday morning these expectations proved false.

When it was confirmed the Sadr movement was to participate in today's protests, which marks the second anniversary of the Abdul Mahdi's government, demonstrators were reassured thinking that "security forces will not attack them, and that the snipers, who killed more than 100 people in the first days of October, will be absent."

Muqtada al-Sadr, who took control of the protest movement of July 2015, now believes that he is able to repeat the experience of four years ago despite the great differences between then and now.

With the intensification of the current movement that began on October 1, the strongest in the shirt life of the current regime, Iraqi political parties relied on Muqtada al-Sadr in containing it as they believed it "threatened their existence", even Sadr’s enemies were awaiting good news from him. 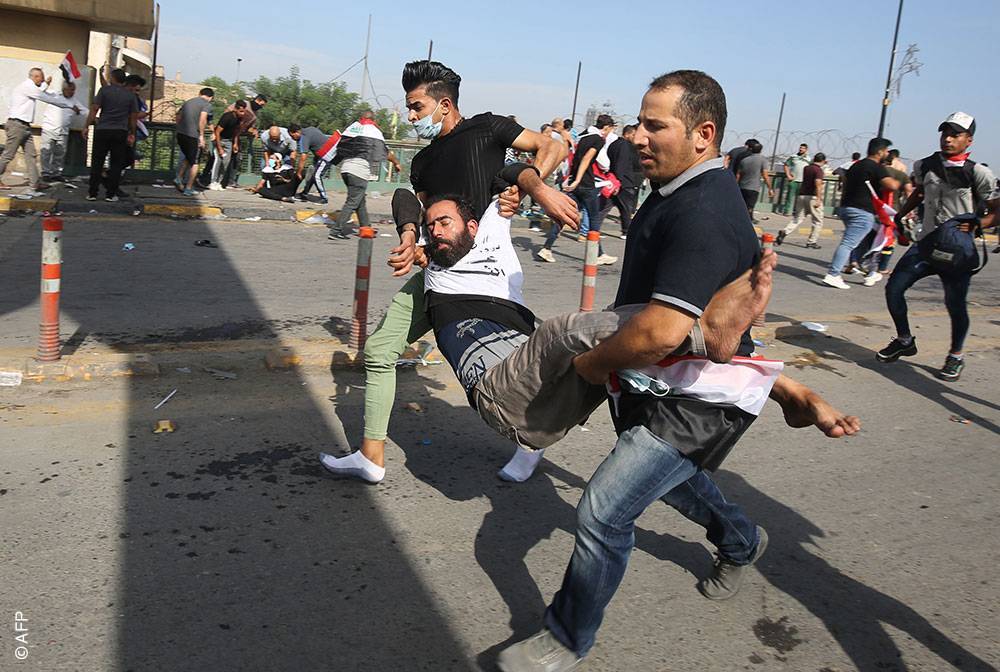 The young protesters did not wait until Friday’s sunrise to gather, on Thursday evening they began to flock to Tahrir Square, the platform for protests for more than a decade, because of the freedom monument of Jawad Saleem, as well as its proximity to the Green Zone where government offices and diplomatic missions are headquartered.

Muqtada al Sadr, whose movement supported the #IraqiProtests refrained from appearing at the demonstrations due to pressure from #Iran and for ideological and financial reasons. Are Beirut and Baghdad challenging an impoverished Tehran's orders?

The demands at the onset of #Iraq’s demonstrations were very general, the only common concern among the demonstrators is government negligence, but after the many casualties, we are now demanding the dissolution of parliament and a new government

The demonstrators tried to enter the Green Zone in the morning and actually reached its walls, but were forced to retreat due to tear gas and the blasts from water cannons fired by security forces who had gathered a few days earlier to control the movement of the protestors.

Moussa Rahmatullah, a veterinarian and protestor told Raseef22 “The demands at the onset of demonstrations were very general, the only common concern among the demonstrators is government negligence, but after the many casualties, we are now demanding the dissolution of parliament and a new government”.

He adds from Baghdad’s Tahrir Square, "The security forces used violence against demonstrators and would shoot tear gas at very close range, I saw a man fall and die when he was hit in the head.”

Iraqi security forces have again used violence against demonstrators, killing two protesters, according to the Iraqi High Commissioner for Human Rights (ICHR), which also said it had "witnessed 21 demonstrators killed, while 1,779 have been injured."

Political analyst Hiwa Osman told Raseef22 “the participation of the Sadr Movement in the demonstrations was to protect it, until this moment, we have not seen any attempts by Sadr to dominate the movement, and his presence protects the demonstrators from any forces that may attempt to assault them.”

Osman expects that these demonstrations will continue in the coming days, especially if the security forces use violence again.

"Muqtada al-Sadr is now busy with political deals," said Rahman al-Jubouri, a senior researcher at the regional research centre at the American University in Sulaimaniyah. “He has refrained from appearing at the demonstrations due to pressure from Iran and for ideological and financial reasons.”

"The protests will intensify in the coming days, and I fear that they will turn violent after the government fails to offer something acceptable to the demonstrators. The government has nothing to offer. I wouldn’t dismiss the possibility that the people will take their rights by force and then we will go into a stage where the constitution will be suspended and a state of emergency announced and then leaders from within the military will come out in order to keep things going.”

Prime Minister Adel Abdul Mahdi announced that his government will make ministerial reshuffles next week away from partisan quotas, stressing the adoption of a plan to cut the salaries of ministers and officials by half.

He said in a speech addressed to the Iraqi people on Thursday evening, "The government will adopt a plan to reduce the salaries of some officials and this reduction will include officials up to the fourth tier including ministers, members of parliament, managers, deputies and the at the highest level their salaries will be halved so that the highest salary will not exceed 10 million dinars a month (roughly 8 thousand dollars)

"Iraq’s demonstrations will focus in the coming days on the complete dismissal of the government of Adel Abdul-Mahdi because the so-called reform packages are unconvincing for the demonstrators and do not meet their demands," Raad Hashem, an adviser to the Iraqi Center for Strategic Studies, told Raseef22.

Hashem expects other demands will follow the demand to dismiss the government, such as holding early elections, amending the constitution and uprooting corrupt officials.

As the sun set on Friday, demonstrations in Tahrir Square in Baghdad and the provinces of Basra, Dhi Qar and Kut turned into sit-ins, despite tight security measures taken by security forces to prevent this from happening.

Some observers of the protest movement say that they were shocked by what happened today. They expected today to be free of any violence, but a quarter of those killed and a third of those injured in the first week of October fell in one day.

The uprising is expected to further intensify and the Iraqi government will use more violence than it used today, especially after the burning of the headquarters of several political parties and an armed faction (Asaib Ahl al-Haq) in Maysan province.