Tunisian independent professor of constitutional law Kaïs Saïed achieved a shock victory in the first round of Tunisia's presidential elections. It is a major and rare development for an independent to come out of 'nowhere' to overtake candidates from the major parties.

In light of this surprising development, many observers have commented that Saied's success represents a punishment of the major parties and political personalities that have occupied the scene since the Tunisian revolution of 2011 without fulfilling much of the promises made to Tunisians. Beyond this self-evident truth, others have observed that candidates have sought to dress themselves in the legitimacy of the Arab Spring in a reflection of the populist trend that has emerged in recent years around the world, as with the rise of insurgent right-wing movements in Europe and the likes of Donald Trump.

Saied, 61-years of age, has progressed to the second round of the elections accompanied with the imprisoned media mogul Nabil Karoui (56-years old), who has been charged with money laundering and tax avoidance.

While Karoui's rise can be largely understood, as the founder and owner of the Nessma Television channel – one of the most watched in Tunisia – as well as the founder of the 'Khalil Tounes' charity association that offers support to the inhabitants of deprived regions of the country (both of which are common instruments for political work in Arab states) it is more difficult to explain Saied's meteoric rise.

Indeed, the jurist nicknamed 'Robocop' for his monotonous voice was largely unknown before 2011, before the revolution would propel him to television screens as a legal expert invited to comment on legal and constitutional issues of concern to Tunisians following their revolution.

Kais Saied, 61, has progressed to the second round of the elections along with imprisoned media mogul Nabil Karoui, 56, charged with money laundering and tax fraud.

Kais Saied has no clear vision on how to govern Tunisia and indeed, does not consider such a vision to be necessary. He too, like the people, is lost and believes that Tunisia "cannot be governed in the same conventional way"

The Rise of Populism

So far, the Tunisian revolution has not achieved what Tunisians hoped for and aspired to. Poverty remains – and indeed, has been exacerbated according to many – as has unemployment, with university and institute graduates regularly protesting to demand jobs. On the other hand, Tunisians have won political party pluralism and many other freedoms, but have nonetheless discovered that these 'major' gains have largely not affected their daily lives.

Amidst this reality, different discourses have emerged from the various parties. The Islamist Ennahda Movement has come out to speak of issues of identity, while the other main political party, Nidaa Tounes, has raised slogans of 'modernity'; meanwhile, the Tunisian left has continued to recycle old motifs in place of its disconnect from reality with the passion of some of its raging leaders… yet this mixture seems to bear fruit no longer. The difficulties of everyday life increase on a daily basis, and Tunisians have become weary of listening to the political programs of candidates because they have largely heard everything that could be said, to little avail.

Amidst this climate has emerged Kais Saied, who has attacked the ruling political establishment and has adopted the motto of "The People Want" – promising to "return authority to the people" and to "continue the revolution" until it succeeds in achieving its promised change.

The questions that remain however are considerable. How will Saied achieve his goals, what will he do and what are his solutions to the country's problems? Yet herein precisely lies his point of strength: Saied has no clear vision and indeed, does not consider such a vision to be necessary. He too, like the people, is lost – wanting many things without knowing how to achieve those desires. He believes that Tunisia "cannot be governed in the same conventional way" – yet he has not offered a substitute plan: indeed, declaring that election manifestoes are redundant because they "market illusions, false dreams and phony promises."

Saied nonetheless says that he has a variety of ideas that he will put later to the public to take their opinion on and to work together for the construction of a Tunisia "on new foundations" – yet without revealing what those ideas are. 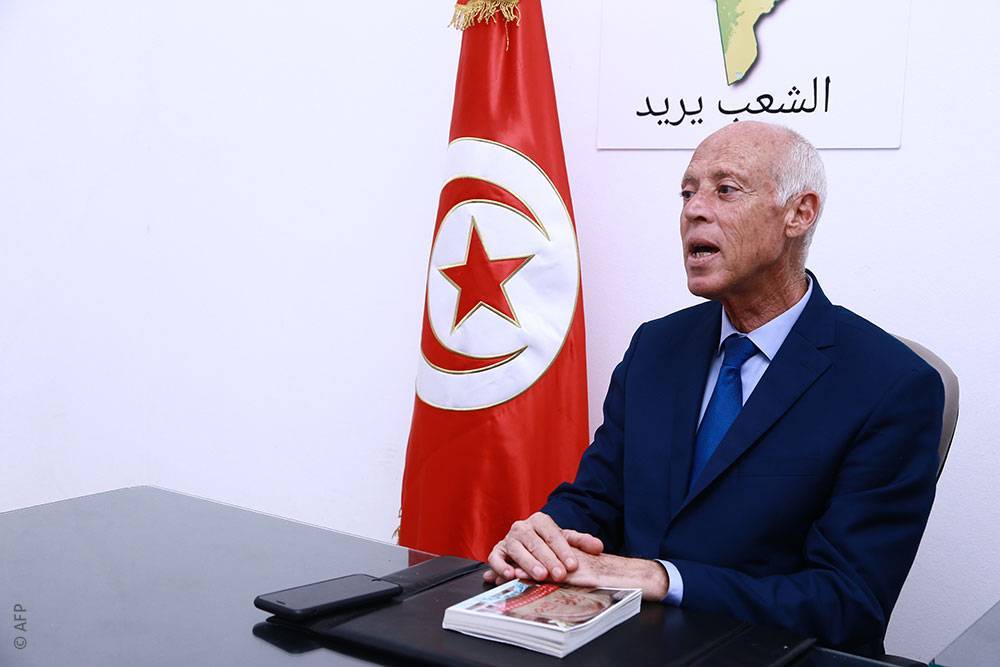 So, an obvious question arises: why is Saied running for president if he has no recipe by which he can achieve his slogans? His answer, as with much of what he says, is simple: "I am running [for president], while it is hateful [i.e. I am forced] to me" – indeed, repeating the Qur'anic verse (2:216): " Warfare is ordained for you, though it is hateful unto you…"

Most of what is said in Saied's speeches is flexible and elastic. He sees no problem of talking of "movements that operate in the shadows" which encourage terrorism – yet when asked on who specifically these parties are, he answers: "I am not a member of the intelligence services in order for me to know."

In other words, he in a sense appears to "know" everything while simultaneously not knowing anything. He "knows" when the answer does not require much beyond generalities, but he doesn't know if he is asked for details – as with all "populists" around the world.

What Saied does know beyond a doubt however is how to appeal to public opinion, undertaking tours of popular (working class) districts and saying things like "The person I consider a statesman is [second Muslim caliph and companion of the Prophet Muhammad] Umar Ibn al-Khattab" in response to the question: "Who do you resemble amongst the politicians?"

The Crisis of Parliamentary Democracy

Saied has also spoken of the necessity to come up with a "new conceptualization of political, constitutional and administrative thought that differs from that which has been established for more than fifty years" – proposing the altering of the Tunisian constitution to achieve his goal.

In Saied's opinion, Tunisia's post-Arab Spring transition has "not been a democratic transition but a continuation and persistence of a former establishment under a new cover." To break this vicious circle, Saied says that the people must be empowered through mechanisms which allow them to achieve what they want.

In his analysis of the public scene, Saied deploys popularly-circulated theories – though often offering them as if they were his own discoveries. Accordingly, he declares "Representative democracy has gone bankrupt" – a popular idea in much contemporary Western theories today. He also speaks of the need for "new conceptions beyond the duality of right and left."

In Saied's opinion, in the aftermath of the revolution that was symbolized by new social communication platforms and technologies, political parties have been relegated to the "sidelines of life and are in their death throes" – for "the populations now maneuver outside of the traditional frameworks and are no longer in need of programs but of tools that can empower them to express their will." He adds: "Today's ideology is the will of the people," citing the Occupy Wall Street protests, the Yellow Vests movement in France and the recent revolutions in Algeria and Sudan.

The question then is how can the people be empowered to replace parliamentary democracy? Here emerges arguably Saied's only tangible policy proposal. He calls for the formation of local councils in every 'delegation' (a smaller administrative division than governorates, numbering 265 in total) with the task of devising a development project on the delegation level. The national parliament Saied suggests, meanwhile, should not be chosen in national elections but be composed of 265 delegates, one from each local 'delegation'.

This is Saied's conceptualization of Tunisia's future. He was forced to run for the presidency and will not rule because the transitional period will be "led by the people", for he is not the "owner of the vision" he says, adding: "I want the visions and conceptualizations to emanate from the people."

Nonetheless, it does not escape anyone's attention that these changes cannot be enforced by the President of the Republic in Tunisia, for the balance of power is vested in the upcoming parliament which is the authority that can decide any changes to the political regime of the country and its form. Saied knows this, and so the only clear point in his proposals is one that is controlled by others – meanwhile, he retains the notion of embodying the people, or helping the people to embody themselves.

Saied's discourse vacillates between two defined points: the first is political and social conservatism, while the second is the rejection of foreign concepts and diktats.

On the second point, Saied criticizes the "severe intellectual alienation [usurpation]" existing in Tunisia and across the Arab world, declaring that "concepts are manufactured abroad and consumed in our countries like foreign goods." This angle allows Saied to tickle national(istic) emotions: he criticizes the "colonial powers" that have "worked in the past on destroying the concept of the Ummah [unified Muslim nation]," and which are attempting following the Arab Spring to "strike at our states from within in fear of the Arab youth who are capable of ingenuity."

The second point is inseparable from the first one, namely political conservatism. Saied criticizes the debate that has taken place in Tunisia surrounding the identity of the state (Islamic or secular), adding that "colonialism does not infiltrate Arab states through borders but through its agents within" – implying that all those who call for secularism are "agents" of "colonial powers."

As to his conservative rhetoric, which has attracted accusations from his political opponents that he is backed by the Ennahda Party, or alternatively that he is close to the Hizb al-Tahrir, Saied insists to create distance from all parties ("My only party is the Tunisian people"), and avoids answering whether he is an Islamist by answering "I am a Muslim… and political Islam is a notion that has come from outside. God did not address Islamists in the Qur'an. He addressed believers and Muslims."

From this standpoint, Saied calls on the state to achieve the maqasid (intended ends or goals) of the Sharia (Islamic Law), which are five in number: (preserving) the soul, honoured possessions (notably a man's wife and daughters), money, religion and freedom – and refuses the bill for equalizing inheritance between men and women because "the issue is decided by a Qur'anic verse and there is no room to interpret a clear text," and shares the same belief on polygamy (men having up to four wives).

Saied also attacks homosexuals and accuses them of receiving support from abroad to "strike at the Ummah and the state" – and even promotes a story whereby "one of his male students was lured by money and started to dress like girls and received money from foreign parties."

Indeed, Saied is with the "suspension of support for all [civil society] associations whether [the support is] internal or external because they are points of infiltration and interference in our affairs."

Now, Saied will face Karoui in the second round, and will likely win in another victory for the populist current – for it is his rhetoric that is more capable of attracting Islamist conservative votes which had been dispersed across several candidates in the first election round.

Algeria at the crossroads: how civil society is transforming the country after Bouteflika