Despite the fact that his running for presidential elections in Tunisia set a precedent in the country's history, and regardless of his promise to decriminalize homosexuality if he wins, the LGBT community rejoiced after Mounir Baatour's candidacy was rejected. Baatour is the president of Shams, an LGBT organization advocating for the rights and freedoms of sexual minorities.

A coalition of human rights organizations & activists united to express in a statement disappointment over Baatour’s nomination, objecting to how he was being depicted to the public in Tunisia and abroad as a "representative" of the LGBT community and spokesperson as they see him “not only as a threat but also a huge danger for our community”.

Baatour’s declaration that he intended to run for President a few months ago caused an uproar both in Tunisia and abroad though he dismissed the idea that his candidacy was “just a media stunt”.

On 8 August Baatour presented his papers for candidacy after receiving 19,565 signatures necessary for nomination but on 14 August when the Independent High Electoral Commission announced the 26 candidates that had been accepted for the early presidential elections scheduled for 15 September, Batour’s was one of 71 rejected candidates.

The commission Spokeswoman, Hasna Ben Sulaiman, told AFP that Baatour’s nomination was rejected due to his failure to gather 10,000 registered voters’ signatures, to which he retorted that the reasons for the rejection were “unclear and unexplained”.

After failing to qualify, human rights organizations and associations concerned with the LGBT community in Tunisia renewed their opposition to Baatour and his association as a "threat to Tunisian society".

"We, the activists and organizations undersigned, confirm through this petition that we do not support Mr. Mounir Baatour's candidacy for the Tunisian presidential elections of 2019." This statement included the organizations 'Damj "Mawjoudin" "Alwani" "Mouja" "Gayday Magazine" "Honna", "Collectif Chaml" ”Association pour la promotion du droit à la différence" (ADD) and others.

"Baatour does not in any way represent Queer society or our movement in Tunisia, we not only consider Baatour a threat to our community bust also a danger." the organizations said in a statement.

The signatories added “We understand, how empowering it would feel, having someone from the LGBTIQ+ community openly represent their candidacy for the presidential election in a country, where homosexuality is still illegal, but we would never support someone just because of his sexuality/gender identity/ gender expression, without having a deeper understanding of their deeds. In addition, we express the wish to see you support our approach to stop fuelling media coverage whitewashing Mr. Baatour as this could ultimately harm the fight for the rights of LGBTQI + people”

Yousra al-Saghiri of “Chaml” was one of the signatories of the statement, which was issued a few days after Baatour's candidacy. She told Raseef22 that the leak of an incorrect list of names of the initially accepted candidates, including Baatour's name, caused a stir and prompted those involved to re-publish the statement.

Regarding this, Ali Bousslemi the executive director of Mawjoudin one of signatory associations explained that the organizations re-publish the statement "every few days to remind the people of our firm position and refusal to consider Baatour as a representative of the LGBT community”.

But what is the background to all this objection to Batour’s candidacy? Saghiri said it is a result of "his repeated harassment of minors. The LGBT community in Tunisia does not tolerate these practices regardless of whether gay or not”.

Despite conflicting stories, Baatour failed to secure the 10,000 signatures needed to run for the upcoming presidential elections in Tunisia, tarnished by the fact he was caught having sex with a minor in 2013.

The curious story of Mounir Baatour, the failed Tunisian presidential candidate who was arrested for sodomy with a minor and who did not have the support of the LGBTQ+ Community.

"The LGBT community in Tunisia is aware of feminist issues (regarding the sanctity of the body and the need to preserve bodily integrity) and does not tolerate sexual violence by anyone and against anyone," she said.

In March 2013, Baatour was arrested for “sodomy” after he was caught having sex with a 17-year-old boy in a luxury hotel in Tunis. He was sentenced in June of the same year to three months' imprisonment under Article 230 of the Tunisian Penal Code.

Activists at the time criticized Baatour being indicted for what was regarded as a "sexual relationship between two men" while in fact, it was a "sexual assault on a minor", an offence criminalized under Tunisian law and the International Convention on the Protection of the Child signed by Tunisia.

Some pointed out that the boy came from a “low income” neighbourhood suggesting that Baatour exploited the boy's economic situation to seduce him with money to have sex with him.

Another reason that led some to sign the statement against Baatour, which was explained to Raseef22 by prominent Tunisian feminist and human rights activist Wafaa Fraus as being due to his stance on Israel "adopting a position of normalization with the Zionist entity which he has talked about several times” pointing in turn to "the existence of testimonies from the LGBT community accusing him of harassment and extortion" … Unfortunately, victims cannot file complaints, for fear of being identified”

Baatour has on numerous occasions defended Israel and expressed his support for normalizing relations In an interview in 2017, he said that "with full normalization with Israel in all fields."

He also celebrated his candidacy by posting an article from the Israeli newspaper "Haaretz" and an episode of the Israeli channel "24" on the news of his candidacy during which he was described as "defender of Israel." on his social media accounts.

Baatour told Raseef22 after news of his candidacy that he “believed in the right of the Palestinian people to self-determination according to the June 1967 borders ... but also against throwing the Israeli people at sea."

And among the reasons for considering Baatour “dangerous” to the  LGBT community, Bousselmi said that there were a number of women who accused of Baatour of violence against them, without giving further details on the nature of the violence or the number of complaints.

Bousselmi criticized the policy of Baatour and his association of “outing” any LGBT member who is arrested or involved in any case by revealing his identity and personal data in various media outlets in pursuit of media publicity and "fame" at the expense of those individuals, who would be put at risk after being exposed.

Al-Saghiri believes that Baatours running for office would not lead to greater support of the LGBT community in the country, "No, of course not. It is just the candidacy of a Gay man in Tunis projects an image that can be sold abroad without creating any real impact in the country”

The executive director of Mawjoudeen goes further, arguing that Baatour poses a "great risk" to Tunisian society in general and LGBT specifically because he is corrupt and has the money and power to help him commit more rape and harassment in public, as well as boast of normalization. "All this causes public opinion and the authorities to consider us (as associations defending LGBT) in the same bracket as him and to restrain us further”

Bousselmi was also critical of “Shams's policy of summoning the support of centres of power in Europe in every big and small way concerning the issues of our society in order to pressure Tunisia economically in order to yield to its demands, but we reject this as it is purely colonial logic, we do not want to apply pressure in this way because the country is in a difficult situation economically”.

Bousselmi was keen to emphasize that this position rejecting Baatour and his association is not recent, pointing out that his association, which started its work at the end of 2014, and obtained a legal declaration to carry out its work in January 2015, refused to participate in any event with "Shams".

"We have often rejected attempts by some to persuade us to participate in events that Shams joins because we know their practices are wrong, and we have often tried to expose their violations," Bousselmi explained “the first statement we issued against Shams was issued by Damj, Chouf and Mawjoudin in April 2018”. 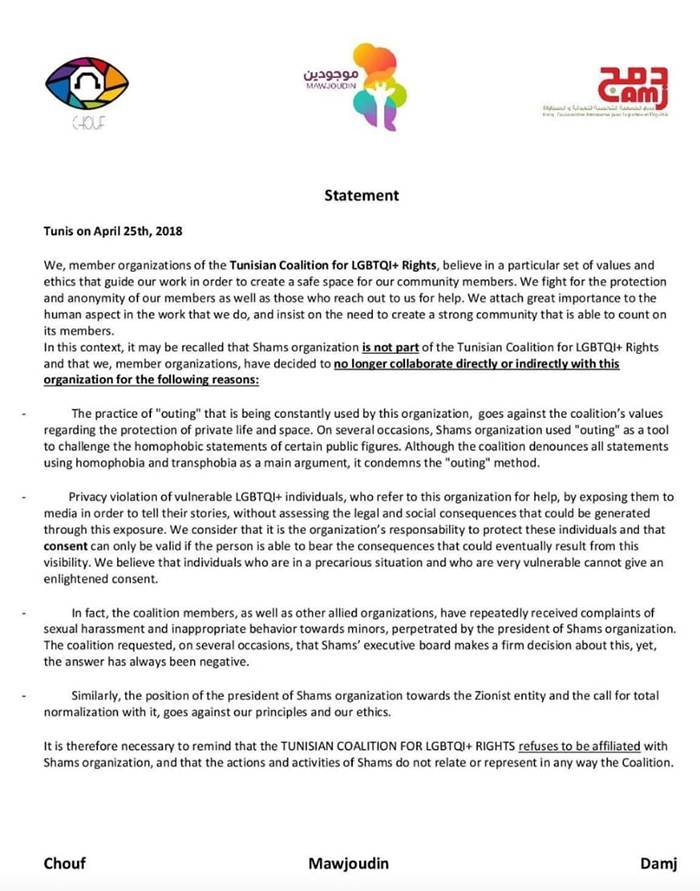 Al-Saghiri agrees with Bousselmi on his position regarding Shams, stressing that her organization (Chaml) as well as "most women's rights organizations & LGBT organizations  boycott the activities of this institution."

This year, members of these associations sought to influence members of the 37-member Tunisian Coalition for the Defense of Individual Freedoms to remove Batour’s organization from the coalition, but "our words were not taken seriously," Bousselmi commented. "We could not understand why at the beginning, but finally we understood ... it is because of the mutual interests and the friendship between the members of the coalition and Baatour".

Is Baatour a Defender of the LGBT+ Community?

Bousselmi believes that Baatour’s relationship with Tunisian officials is based on 'extortion' and this empowers him. His colleagues have complained about his twisted and dishonest methods, and he has many relationships with businessmen, so he knows we won't be able to 'beat him'".

In addition, Baatour has strong relationships with many media outlets who benefit from the media exclusives he provides them with.

Bousselmi explains "Shams does not have any on the ground activities to defend LGBT people, and only when someone is arrested because of their homosexuality, Baatour takes up their case and acts as their lawyer and then he spreads this on social media in order to become famous when often, in reality, he is absent from court hearings and we or another organization have to hire a lawyer for the imprisoned person”

He also accused Baatour and his association of "collecting and stealing huge funds from those interested in LGBT rights in Tunisia and Europe on the pretext of establishing activities for the association, which later turned out to be untrue," he added, “ we don’t want any authorities to believe us and discredit Shams without evidence what we want is greater focus on what is in our past statements and our accusations”

On the other hand, Bousselmi does not deny that one of the reasons for the prominence of "Shams" as a representative of the LGBT community in Tunisia, especially abroad, is  due to mistakes committed by other organizations some of which insist "to exercise all their activities in secret to protect members of the community despite all the wonderful work they do”

As for his organization Mawjoodin, he pointed out that they committed a similar mistake “At the outset, due to extreme caution, it took us a long time to organize any activity to avoid harming our members,” he said. "We are currently striving to increase the number of our activities & to be more visibly present in Tunisian society”

Bousselmi appealed to Tunisian society "not to put all associations or even members of the LGBT community into the same bracket as Baatour because he does not represent us and no organization can claim to represent the whole community since some of its members refused to be represented by any organization”.