‘Abu Zinar’ is an alias, with the word ‘Zinar’ meaning ‘Belt’. The name is widespread amongst Syrian Kurds, often emerging after the ‘Arab Belt’ was established. On this, Abu Zinar tells Raseef22: “The regime dispossessed the Kurds of agricultural land they owned, and granted it to the ‘submerged’ Arabs” - that is, the inhabitants whose lands were flooded due to the Euphrates dam construction “and gave additional plots to these agricultural farmers, but to the south, meaning that the issue was not about the size of the agricultural land, but its location.”

Abu Zinar is one of thousands of Kurds dispossessed of their land along the border strip between the Kurdish areas of North Syria and Turkey in 1974, before these lands were redistributed to Arab agricultural farmers arriving from Raqqa and Aleppo Provinces.

Indeed, the issue began before the construction of the Euphrates dam. In 1966, during the third regional conference of the Arab Socialist Ba’ath Party, the fifth section of the conference’s proposals stipulated “a review of the ownership of lands across the Syrian-Turkish border, with a length of 350 kilometers and a depth of 10-15 kilometers, with these lands being considered property of the state, in which investment regulations and are altered for national security reasons.”

The “Arab Belt” is a term describing the confiscation process by the Syrian government of agricultural lands belonging to Kurds and Aghas (chieftains or village heads who were also landowners) in the province of Hasakah, and the distribution of the lands to Arabs arriving from the provinces of Aleppo and Raqqa to be settled in the Jazira region of north-east Syria, along the length of the border strip with Turkey.

The Syrian regime would grant the Arabs from the “submerged” (flooded) agricultural areas according to the proportion of rain in the border territories, granting areas ranging from a size of 150 dunums (an Ottoman-era unit equivalent to the English acre) from the city of Derika (al-Malikiyah) bordering the Iraqi Kurdistan Region and the Kurdish territories in south Turkey - while in the city of Serê Kaniyê‎ (Ras al-Ayn) bordering Turkey, they were granted 300 dunums.

The number of Arab families that were transferred from Raqqa province to the Arab Belt would exceed 4,000 - distributed across various villages constructed for them and with a population reaching 40,000 at the time; making up more than 6% of the population of the province of Hasakah.

During June 1974, the Syrian government began preparing lists of the Arabs who would be transferred from the area of al-Tabqah (in the province of Raqqa) to the province of Hasakah. The transfer order would be executed following the decision Number 521 of the Regional Command of the Ba’ath Party.

At the time, the government entrusted the deputy secretary of the Ba’ath Party, Mohammed Jaber Bajbuj, and member of the regional command of the party Abdullah al-Ahmed with the task of monitoring the settlement process and safeguarding the provision of homes for the Arab families that were to be relocated to Hasakah.

In the autumn 1974, the Syrian government began constructing a camp near Qamishli Airport, where it settled Arab families coming from the province of Raqqa – in a tight security camp, in anticipation of possible attacks by the owners of the agricultural lands. The state would then build villages to transfer the Arab migrants to, with the transfer and settlement process being completed by the spring of 1975.

The total size of the agricultural lands allocated to the families arriving from the province of Raqqa would exceed 3 million dunums in the province of Hasakah - all lands previously owned by Kurdish families, both Agha landlords and peasants.

The Syrian government at the time further undertook to take the costs of the village construction and transfer process upon itself, as well as the process and logistics of resettling those arriving on the border strip.

In numbers… the granted agricultural lands

335 Kurdish villages would be adversely impacted by the government’s transfer and settlement policies, some were removed and merged with newly-created villages. More than 150,000 Kurdish residents of the province of Hasakah are estimated to have been disadvantaged by the government’s policy.

39 new villages would be founded along the border-strip as part of the ‘Arab Belt’, distributed regionally as follows: 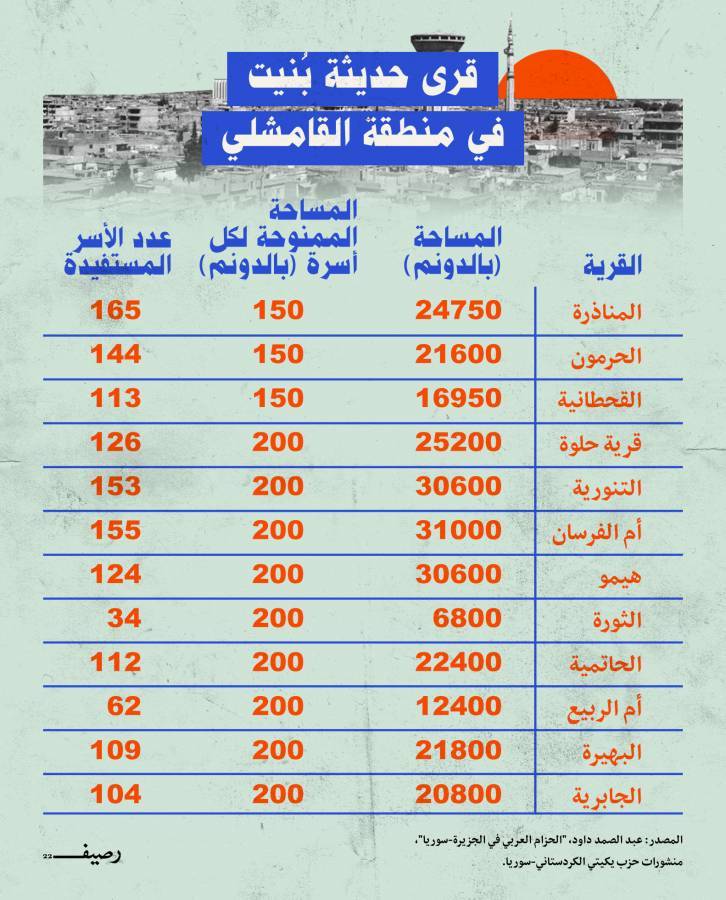 Firstly: the region of Qamishli, the current political capital of the Syrian Kurds today and the largest Kurdish city - would witness the construction of 12 villages, beginning from the east near the village of Tirbespiyê (Qubur Bayd), and ending with the village of Ghazala along the road to Amuda, with the following constituting the new villages: 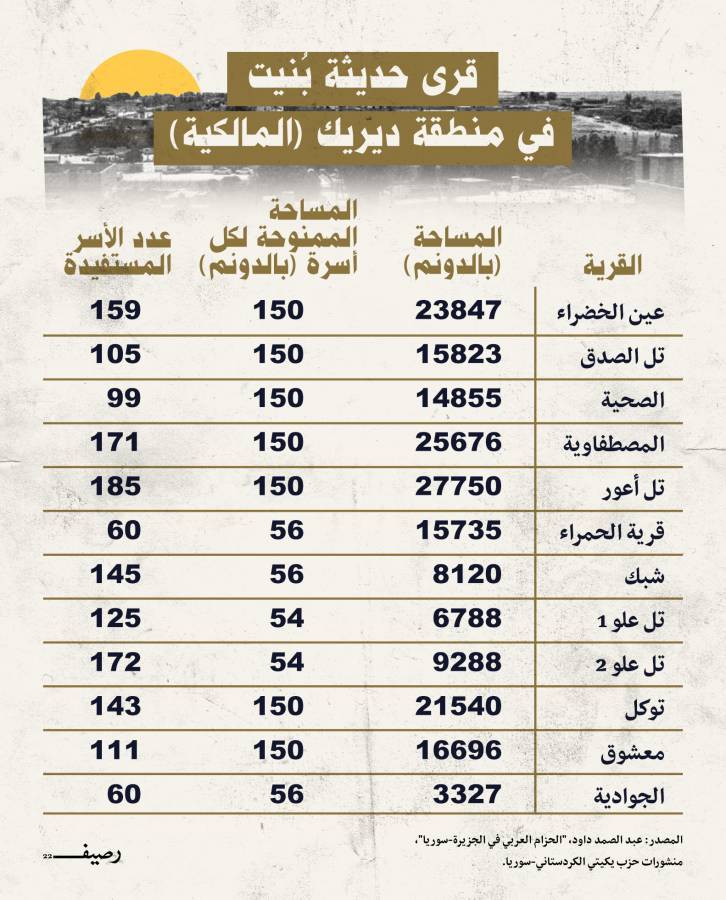 Secondly: the area of Dêrika (al-Malikiyah), bordering both the Iraqi Kurdistan Region and the Kurdish areas of south Turkey. Dêrika is considered one of the Kurdistan border ‘triangle’, with twelve villages being built in it, starting from the shores of the Tigris river in the east and ending at the west. These new villages are listed as follows: 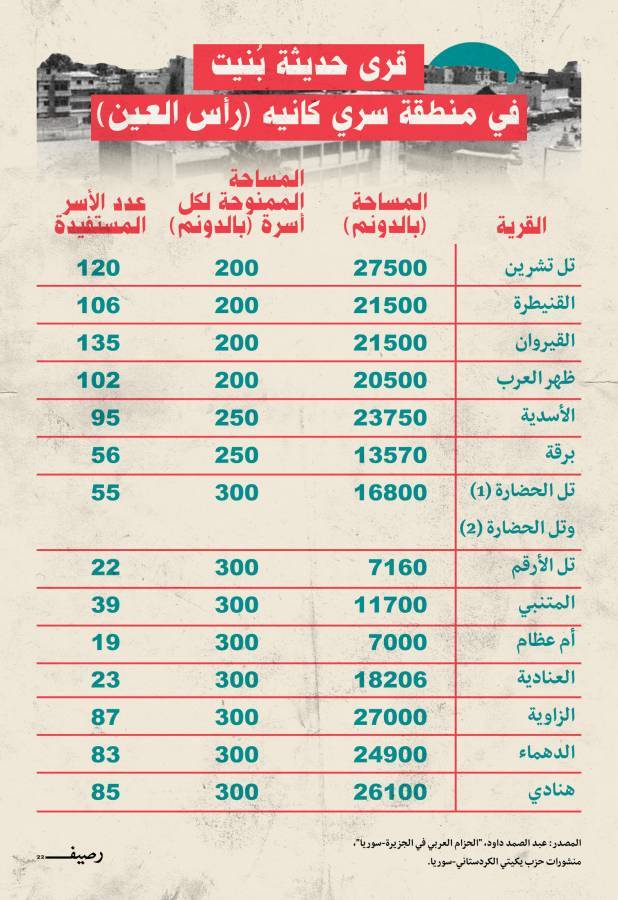 Tens of villages would subsequently sprout out of these newly-constructed villages, with the new arrivals themselves building a large number of villages in the agricultural lands granted them by the state - with every village of those aforementioned eventually transforming into three villages at the least.

In its racist policies targeting the Kurds, and planned demographic change in their region, the Syrian regime relied during this period on a study by Mohammed Talab Helal produced in November 1963, titled “A study on the province of al-Jazeera in its national, social and political aspects.”

This study was discussed in the conferences of the Arab Socalist Ba’ath Party, including the third regional conference of the year 1966.

Mohammed Talab Helal was an officer in the Syrian Interior Ministry, graduating with the rank of First Lieutenant in 1961 - subsequently assuming various roles, most important of which was Deputy Prime Minister as well as head of Political Security, during which he wrote the aforementioned study.

Helal’s study would encompass a recommendation to “settle Arab and nationalist elements in the Kurdish border agents, as they are the fortress of the future, while at the same time surveilling the Kurds pending their displacement; we propose that those [settled] are from the Shammar [tribe] firstly because they are from the poorest tribes on earth, and secondly because they are 100% guaranteed to be [loyal] nationalists.”

Furthermore, the study called for “making the northern border strip of al-Jazeera a military frontline, in which military assets are deployed with the mission of housing the Arabs and evacuating the Kurds, according to whatever plan the state formulates.”

The study would go on to call for the “formation of collective farms for the Arabs that are housed by the state in the northern strip, with these farms being militarily trained and armed exactly like the Jewish settlements on the southern border.”

Ammar Akla is a former employee in the Institute for Agricultural Reform in the province of Hasakah , he also worked in the division of confiscation and legal affairs, and was commissioned to write a study on individuals who were negatively affected by the government’s ‘accreditation committee’. He relays a story that took place during the confiscation proceedings.

Akla told Raseef22: “The accreditation committee in the province of al-Hasakah in sitting No.1 for the year 1967, headed by the then-governor of al-Hasakah Mohammed Haydar, ruled on 206 cases in the same sitting, and as a result inflicted damage on 850 owners, who had valid land title deeds, which were studied, while those that were in surplus were seized; the owners were given what they deserved [in compensation] for giving up the land; this included some who received it [the land] as inheritance from the father or a deceased spouse before the coming into force of the Agricultural Reform law.”

However, the Accreditation Committee did not recognize the ownership of those who inherited the land before the coming into force of the Agricultural Reform law, such as the landowner Abdi Khalo in Amuda, who had passed away before the promulgation of the Agricultural Reform law, as well as Khaled al-Tala’a who also died before the law’s enactment. Instead, the Accreditation Committee decided to revive the dead and consider them to be owners and did not recognize the inheritance. According to Akla, “such behavior was akin to spiteful revenge operations which contravened legislation and the law of the land.”

Seizing the land was a condition in order to distribute it. Accordingly, Akla says “the land that was seized was distributed to families approximately 300 kilometers away from the seized land, which is a clear violation of the Agricultural Reform law for the bases of distribution and rent.”

In its origins, the law stipulated the seizure of agricultural lands for those whose land ownership exceeds the legal limit. However, in some border villages, Kurds were dispossessed of their land ownership despite their ownership being within the range allowed by the law.

Accordingly, Abu Zinar says: “I used to own 200 dunums in my village of al-Tanuriya; the Agricultural Reform came and took it, before being granted later to the submerged Arabs, and then the Syrian government gave me a piece of land with the same agricultural size in the southern part of the city of Hasakah.”

However, what in reality took place in the border strip was that the sorting process of the lands designated for agricultural reform was exclusively selected in the border strip, and the Kurdish owners were moved southwards to a depth of 10 to 15 kilometers away from the border.

Near the border strip, were also de facto seizures of small areas occurring outside the realm of the law. Despite the fact that such lands were not included in the scope of the Agricultural Reform Law, the victims were relocated to other areas further away from the border, as took place in the village of Tall Būm (Karkand) and others, according to the former employee at the confiscation division.

Closing the Shortfall: the Second Appropriation

After the Syrian government was finished with the process of seizing agricultural lands, bringing the ‘submerged’ Arabs to settle in those territories, the region was nonetheless headed towards a second limited demographic change in further agricultural expanses.

The areas of Derika, Çil Axa and Tirbespiyê are distinguished with the presence of old and large black rocks, distributed between the agricultural lands and near the water springs; these lands were not suited for farming because of the presence of the rocks - until a number of poor Kurdish peasants decided to fix the area and remove the rocks, as per the Agricultural Reform law issued by the very same Syrian regime.

However, after the peasants finished restoring the land, it was seized once again by the Syrian regime - with a part granted to the ‘submerged’ Arabs under the clause ‘closing the shortfall’, while another part was taken by Syrian regime officers.

It should be noted that many of these operations took place on the direct orders of military officials from the regime’s various security branches, with the majority of these coming from areas outside the province of Hasakah.

Regime officers would appropriate large tracts of agricultural land that had been repaired and restored by Kurdish peasants in the area of Derika and Tirbespiyê - these were recorded as being part of the lands granted to the ‘submerged’ Arabs.

In 1982, ‘submerged’ Arabs - in coordination with Syrian regime officers - seized agricultural lands that had been restored in the villages of Celka and Serimisax. The Syrian regime arrested a number of the villages’ natives who refused to agree and sign the release of their lands.

Indeed, 155 Kurdish families were estimated to have been impacted by the second confiscation process in the areas of Alyan and Derika, with every Kurdish family owning approximately 30 dunums, which they had repaired and restored according to the Agricultural Reform law of the Syrian regime itself.

The Search for Early Qur'anic Manuscripts