In countries that respect their citizens and their right to full disclosure, explosions are generally followed with an official statement, in which the available information is presented, while the media in parallel freely analyses and monitors information pertaining to the event.

But in states where only one voice is propagated, the regime is the sole holder of the narrative, as well as being the owner of the media and television screens. The state is the player, referee and audience. Here, a piece of information becomes intermeshed with speculation, facts with rumors - leaving society prey to fear and manipulation.

The events of the past twenty-four hours in Egypt, following an explosion near the National Cancer Institute in Cairo, serve as a template to the second scenario - with a fog of uncertainty subsequently dominating the conversation around the event.

An explosion with reasons unknown to all

At half past eleven on Sunday night, a huge explosion was heard in central Cairo, witnesses saw flames emerging from the Cancer Institute building. The news was first disseminated on social media platforms, accompanied with questions on what had happened, with widespread speculation and theories being circulated amidst the absence of information.

The first media reporting of the event would be published on the website Cairo 24 at 11:50 pm - that is, twenty minutes after the explosion - with the headline “Fire at the National Cancer Institute… and a Loud Explosion”. The post went on to cite “witnesses attributing the explosion to Oxygen cylinders inside the Institute.”

Ten minutes after this report, the al-Fajr website reported the event under the headline “Fire in the second level of the Cancer Institute”, again attributing the fire to an explosion of Oxygen cylinders inside the building.

It should be noted here that the two sites are independent of the state - officially and unofficially (i.e. owned via security apparatus entities)

The state would finally emerge at 1:10 am, in the form of an official statement by the Interior Ministry: “Tonight, the 4th [of August] a civilian car accidentally speeding in the wrong direction on the Nile Corniche road in front of the Cancer Institute in the Sayyida Zainab police precinct crashed into three cars, leading to an explosion as a result of the collision, resulting in the death and injury of a number of citizens, who were transported to hospital for treatment… legal procedures have been undertaken.”

The explosion at the Cancer Institute reveals the total failure of Egyptian media coverage of events - not because of the weakness or deficiency of Egyptian journalists, but because the state has reduced them all to a position of awaiting orders.

A tweet by Sisi changed the explosion story from accident to Muslim Brotherhood terrorism, prompting the Editor-in-Chief of Al-Shorouk newspaper to comment: “18 hours of floundering and intentional misleading of public opinion.”

While it is true that the statement arrived one hour and forty minutes after the explosion, this is not a substantial delay when taking into account that the Ministry wanted to ascertain itself of the situation before making any statements. The brief statement did not reveal much, but generally cannot be considered to be a poor one as it constituted an initial preliminary statement to be followed by further more revealing ones later.

On the other hand, the social commentary that followed the statement revealed the sheer scale of mistrust between Egyptian citizens and the Interior Ministry, with most doubting the official narrative of the explosion resulting from a car crash and calling it into question.

There was no further communication from the Interior Ministry in relation to speculation from the public, and the Ministry did not release further details - providing more room for suspicions and sarcastic criticism on social media platforms.

Meanwhile, between the Interior Ministry statement and the comments of suspicious citizens, Egypt’s media machinery had seemingly failed in providing genuine coverage of the event. Instead, the state newspapers restricted themselves to broadcasting official statements, while the private newspapers (controlled by the security apparatus) covered the event only in terms of counting the number of injured. The online platforms of the newspapers meanwhile, such as Ahram Online, which is supposed to be the main source of information on Egypt for English speakers, completely ignored the explosion.

Indeed, the performance of the Egyptian media was so shackled to the extent that it prompted a member of the Journalists Syndicate, Hisham Younis, to remark: “The explosion at the Cancer Institute put the Egyptian press in a temporary coma.”

On the other hand, if we can describe the newspapers’ coverage of the event as poor due to the absence of sufficient information, the reality on Egypt’s television screens was even more catastrophic. Despite Egyptians having two dedicated news channels - Nile News and Extra News - the Egyptian viewer failed to find any coverage of the event on them, prompting them to resort to regional Arab television channels to find out what was happening in their country, and provoking the journalist Mohamed al-Baz - who is state media friendly - to remark on his “90 minutes” show: “They made a mistake, yes they are mistaken.”

Orders were given, and the narrative changed 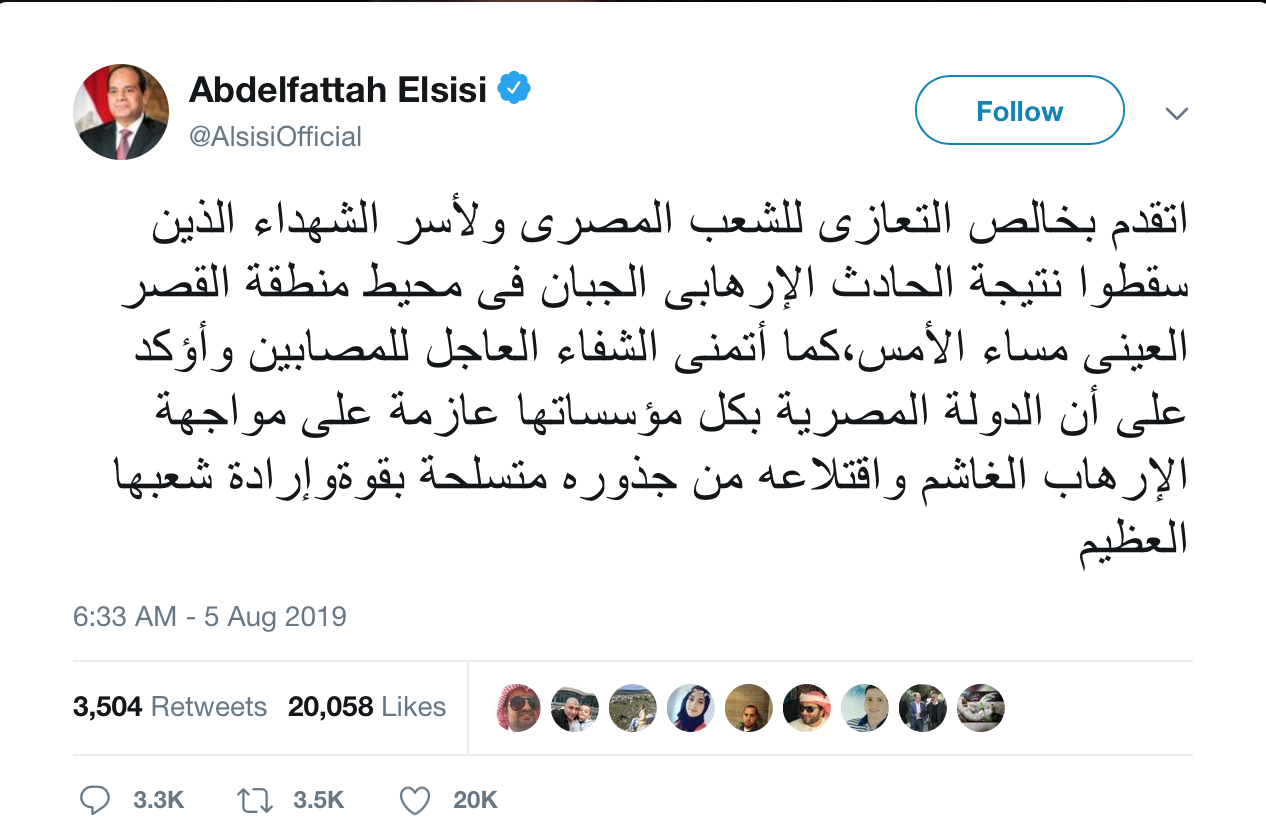 However, at 4:30 pm on Monday, the official narrative would be turned on its head, with President Abdel Fattah el-Sisi tweeting on his official account: “Full condolences to the Egyptian people and the families of the martyrs who fell as a result of the cowardly terrorist incident in the vicinity of the Qasr al-Aini area last night.”

Two minutes after the President’s tweet, the Interior Ministry would release a new statement declaring that the event was a terrorist attack, carried out by a car that had been stolen months ago. The statement accused what it described as the pro-Muslim Brotherhood Hasm Movement of being behind the attack.

Subsequently, the compass needle changed completely; after a day in which the official narrative repeatedly pointed that the fire was a result of a ‘car crash’, it quickly pointed to “terrorism and the Muslim Brotherhood.” Indeed, only a few hours later, a hashtag reading “The Brotherhood blow up the Cancer Institute” would trend on Twitter.

While the first statement put out by the Interior Ministry could be deemed temporarily acceptable, the second statement would open the door to wider and more critical questions surrounding the attribution of the explosion to the “Hasm” movement. Here, commentators now questioned how the state could not ascertain whether the explosion was a terrorist incident or a car crash hours after the event, yet could so quickly and definitively discover the perpetrator. Furthermore, if the state already knew from the start about the car, why did it not stop it?

This surprising shift in position prompted the Editor-in-chief of the Al-Shorouk newspaper, Mohamed Abd al-Hafiz, to comment: “18 hours of floundering and intentional misleading of public opinion.”

Indeed, the Hasm movement had already released its own statement denying responsibility for the event, declaring “the movement’s unchanged and fixed course of preserving Egyptian life and affirming its sanctity.”

Whether “Hasm” was behind the attack or not, the pertinent question remains on how the Egyptian state manages its media file, especially with regards to similar incidents.

Theoretically, the regime’s philosophy has been to impose its grip on media platforms in order to convey its messages and confront the “enemies of the state”, but in practice it appears that the masses have long abandoned these platforms and have failed to find a recourse from which they could be informed of the country’s news - other than the media platforms the regime is fighting in the first place.

The explosion at the Cancer Institute reveals, for the millionth time, the total failure of the Egyptian media to cover events - not because of the weakness or deficiency of the abilities of Egyptian journalists, but because the state has reduced them all to a position of awaiting orders.