Torn between two genders, torn between two identities, one imposed on you and the other living inside you for years waiting to see the light and go out to the public.

"Each of us carries within ourselves another who is at the same time strange and in conformity with our self," said the French philosopher Edgar Moran.

You strive constantly to hide your self, which is different from that of everyone else, and delude yourself into thinking it's not there. But you are always aware that you are within a body, like a container you were thrust in forcibly when you were born, and that you will be burdened with the burden of social roles assigned to you. To find yourself the subject of debate and discussion all over the world and spend a lifetime trying to prove your existence.

This is in short what it means to be transsexual.

Ahmed, a Tunisian transsexual, could not identify with the heavy social roles thrust on him and realized three years ago that his identity is not linked to female genitalia or chromosomes x or y. It was more complex than that, something else beyond the duality of gender and sex, and something that broke the mold of stereotyped social roles. Through this gendered pendulum, Ahmed went on to discover himself and struggled to close the gap between him and his strange body.

"Torn between two genders, torn between two identities, one imposed on you and the other living inside you for years waiting to see the light and go out to the public": the journey of a Tunisian transsexual

This is in short what it means to be transsexual

With an absent-minded look and a booming voice, Ahmed began to narrate his story, which began in Tunisia, where his suspicions about his difference arose and alienation from the self and the desire to disavow the body of a stranger began. It carried him to Egypt, where a test administered by Al-Azhar, the center of Islamic learning, confirmed what he felt in his depths.

"Since my youth, I have been unlike my peers,” Ahmed said. “My flesh is not their flesh and my thoughts not their thoughts as Max Stearner said.”

He added: "I was often the subject of gossip of neighbors who were constantly watching me hoping I would slip up so they could go tell my mother, but she did not care about them or at least pretended not to. My mother was, and still is, my biggest support in all the hardships I have experienced in all stages of my life. This support is what made the hell that I lived a little easier, a luxury that is not enjoyed by many trans people.”

“Although I did not know much at the time about gender and sexuality, I was guided by some intuition that I was two in one. I have always felt myself trapped in a female body and I questioned my gender identity. Throughout my adolescence, I avoided looking at the mirror, fearing to see another body that did not resemble me, or was even contrary to me."

“After finding by coincidence the Facebook page of a group of transexuals in Egypt, I decided to travel to present my medical file to the Fatwa Committee in al-Azhar, and I was sure of the truth of what I felt in my soul.” 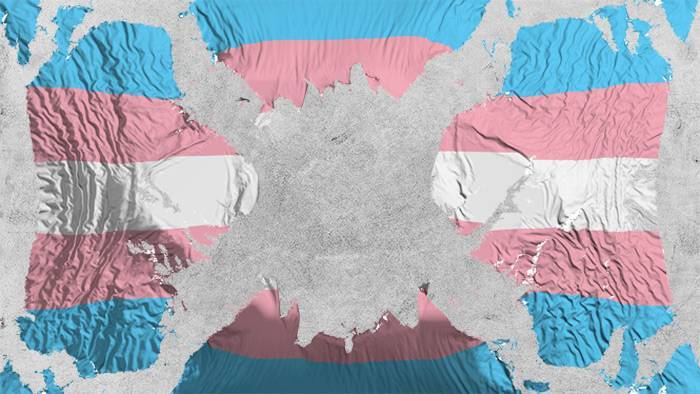 “When I returned to Tunisia my journey of transitioning began with injections of testosterone and a secret operation to remove my breasts in order to end the rupture I was living between the two identities. I recalled the quote by the poet Mahmoud Darwish: ‘An exile in the outside world and an exile in the inner world.’ I lost myself in the margins, like other members of the LGBT community in the Arab world, and I gained nothing but strange looks and repressive and authoritarian practices."

Like other LGBT individuals, Ahmed endured numerous slurs like "Aisha man," "effeminate" and so on that spring from ignorance.

In fact, the labels differ in turn, and vary between transgender, transsexuals, intersex and others. Most of them refer to many undefined uses leading to broad and divergent interpretations that mix between sexual minorities and create confusion among researchers.This deep conceptual confusion actually comes from the heart of the LGBT community itself, which encompasses all shades of the gender spectrum. Every individual defines themselves as they wish and mobilizes language in their so that they can clearly present their gender identity away from the weight of traditional gender.

In this context, in December 2016, a participatory platform was launched to examine gender issues and women in the Arabic language, the so-called "Wiki Gender," in an attempt to identify and unify concepts.

According to the report, the Gender Forum and the Economic and Social Commission for Western Asia (ESCWA) has translated the term transsexuality into "sexual change”, which was Arabized into a phrase that translates as “correcting sexual identity," whereas the Egyptian Initiative for Personal Rights (EIPR) uses the terms "transgender" and "trans"".

Transsexual Tunisians do not suffer from linguistic marginalization only, but also from exclusion by the Tunisian state, which has not yet officially recognized their existence. This is not surprising for the sexual minority system under whose banner many people are represented, and where anyone who adopts a more complex identity will find themselves marginalized.

They also suffer from repression and rejection by society. This rejection may take many forms, the most prevalent and dangerous being physical or emotional violence.

The Damj Justice and Equality Association, the women's organization Chouf and the LGBT initiative Mawjoudoon conducted an important survey whose alarming figures highlighted the daily struggle of sexual minorities in Tunisia, particularly transsexuals, through their exposure to various forms of physical and emotional violence regardless of their diverse social backgrounds, their family environment and their place of residence.

The survey found that 51.8 percent of the respondents receive daily a barrage of insults, a huge number of personal and embarrassing questions through social media sites, as well as threats and abuse which undermine their human dignity.

Verbal harassment is not limited to public places, but extends to school spaces - whether by students, teachers or even administrators – as well as workplaces.

Physical harassment is define as stalking and following the individual with urgency and without consent, for no other reason than being a member of a minority that can easily be sexually exploited or abused or through the exercise of any form of physical violence.

The survey indicated that 31.2% of the respondents were subjected to physical harassment and were beaten at least once in their lifetime. A quarter of them were attacked at least once, using different weapons such as a knife, stick or other implement, or endured an attempted rape or murder.

Stories of blackmail and exploitation ... and the destruction of livelihoods

In addition to the various forms of violence, there are many other practices and attitudes directed against transsexuals, such as contempt, mockery and exploitation of all kinds.

Ahmed spoke of being exploited when he was he was looking for a place to live. When he thought he had found what he described as the "perfect place," a tiny one-bedroom flat that was quite cheap, the real estate agent demanded that Ahmed host him and his girlfriend for the weekend in exchange for turning a blind eye to the fact that Ahmed's identity papers did not reflect his apparent gender identity.

Ahmed has become accustomed to such discriminatory, marginalizing and exclusionary practices. A week before our interview, he was fired from his job at the Sidi al-Bahari market in the capital, where he worked as a vegetable vendor for less than ten dinars a day.

Ali Bouslemi, the head of the organization Mawjoudoon, said that many trans individuals suffer from unemployment despite having qualifications and skills required for jobs. This is due primarily to the absence of a legal framework to protect trans individuals and officially change their identity as well as the transphobia of Tunisian society.

Al-Bouslemi said he knew of a case where trans people were hired at a coffee shop but who were quickly dismissed with the owner citing complaints from conservative families who felt ill at ease at their presence, and this was enough for them to lose their jobs.

"I will someday become what I want" is the cri de coeur of trans people who are still searching for their identity that is lost in bodies that are alien to them and in a part of the world which rejects all differences and variations on the norm.

"I will someday become what I want" is the cri de coeur of trans people who are still searching for their identity that is lost in bodies that are alien to them and in a part of the world which rejects all differences and variations on the norm.

They do not need to be tolerated by the community because they have not committed any crime. They need legal recognition first, and to frame their cases in a way that guarantees their rights and personal freedoms as stipulated in the Tunisian Constitution.

Who am I? A transsexual’s journey in Egypt to answer the difficult question

"We’ll leave you a nice memento on your pretty face": how hate messages and threats forced a gay man to flee Egypt

Incest in Iraq... A husband asks his wife to put up with his brothers’ desire

Tunisian healer rapes hundreds under the guise of spiritual intercourse