Testimonies of torture victims in the Arab world are frequent, almost to the point of being routine. Since 2011, the media was charged with an abundance of the stories of those who were tortured, along with the sadistic torture methods used. Reports from human rights organizations have documented testimonies of narratives that previously occupied only a peripheral place in people’s imaginations. While testimonies poured in from the torture cellars of Egypt, Syria, Iraq, and the other turbulent Arab countries, Lebanon maintained a low profile amid the commotion.

Compared to other countries, the number of reported torture cases remained relatively low, thereby warranting an insistence in the political rhetoric that “Lebanon respects human rights.” Nonetheless, reports by international and local humanitarian organizations, as well as leaked videos, confirmed the existence of human rights violations in Lebanon, including an October 2014 report issued by the UN Commission Against Torture, stating that torture in Lebanon is a “pervasive practice that is routinely used by the armed forces and law enforcement agencies.”

It is in this context that the latest report by the Human Rights Watch arrives, entitled ‘It’s Not the Right Place for Us’: The Trial of Civilians by Military Courts in Lebanon. ‘Creative’ Torture Methods The report coincides with the approaching date for fourteen civilians to stand military trial on charges of participating in the 2015 protests against corruption in the government during the waste management crisis. The report condemns the use of military trials against civilians, highlighting this particular case, in which the defendants could face up to three years in prison. Moreover, the report does not only address this case, but also follows up on cases of victims who stood trial and some of whom were tortured during the interrogation of the Ministry of Defence. The report documents testimonies of civilians who were interrogated without the right to counsel, and who described beatings, psychological torture, electrocution, being hung by the wrists with hands tied behind the back, and orders to sign statements while blindfolded. In some of the cases, the confessions extracted under duress were the only evidence presented.

The Human Rights Watch report documents testimonies from Beirut, Tripoli, and Beqaa. It also told the story of the Syrian boy, Haitham, who was arrested two years ago when he was fifteen years old. He stood trial after signing his “confession” while blindfolded. When he showed the judge torture marks on his body, the judge did not comment. Moreover, the report published the story of sixteen-year-old Khaled, whose lawyers said he was interrogated for three days while blindfolded. His lawyers further claimed that the interrogators “punched him on his face, hit him with a rod on his back, insulted him, and threatened him.” 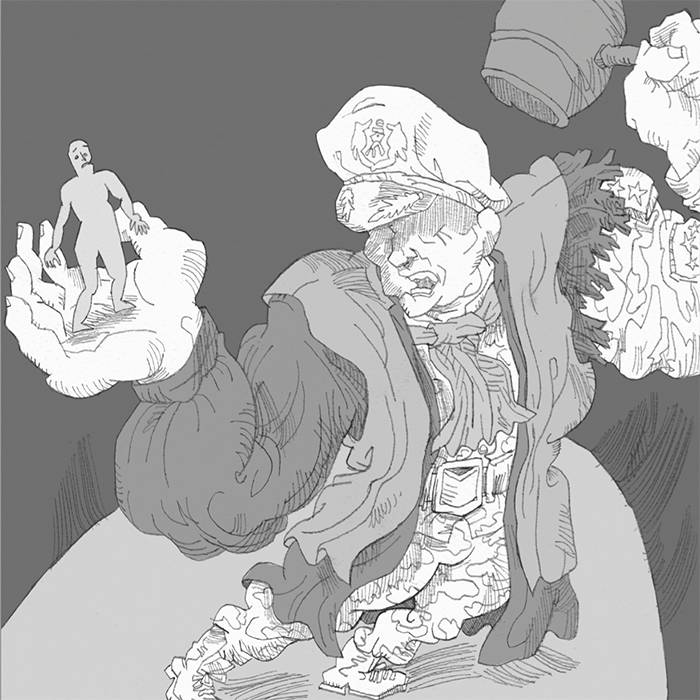 On the fourth day, he was transferred to the Military of Defence, where interrogators “hung him from a rope tied to his wrists behind his back, and beat him. They also attached wires to his genitals, electrocuted him until he fainted, and threw water on his face to wake him up—all while asking him to identify terrorism suspects, and to confess to placing a bomb, throwing grenades at army posts, and membership in a terrorist organization.” “He didn’t know where the beating was coming from,” his lawyer told HRW. “He admitted to everything, to crucifying Christ, to killing the prime minister.” Judge and Officer in One “The jurisdiction of the military court is extremely wide,” Advocacy and Communications Director for Human Rights Watch’s Middle East and North Africa division, Ahmed Benchemsi, tells Raseef22. “Any conflict arising between a civilian and a person related to the security institution may primarily result in a military trial,” he adds.

Benchemsi points to the report’s delineation of the military courts’ broad jurisdiction over civilians. As per the report, these jurisdictions include cases of espionage, treason, draft evasion, unlawful contact with the enemy (Israel), or possession of weapons. Additionally, crimes that harm the interest of military or security forces, or the general security of the country, as well as any conflict between civilians and military or security personnel or their civilian employees are included under their jurisdiction. Whenever light is shed on the military’s violations of human rights and the torture methods they use, certain voices arise demanding respect for the security apparatus during “times of crisis”, pointing to the escalating danger of terrorism as justification.

“We respect the military entity and appreciate its crucial role in ensuring the stability and security of Lebanon in light of the increasing regional dangers. However, the circumstances, whatever their nature, are no justification for the human rights violations, which do not help curb these dangers in any way,” says Benchemsi. He moreover evokes the common perception, whereby the rights of suspects can be foregone in favor of retaining the sovereignty of the state. “What is the point of the interrogation? Is it the truth, or is it to assault a person to confess to something they want to hear,” Benchemsi notes, adding that torture is not an effective method for securing accurate information to help ensure security. On the contrary, it forces the suspects to confess to things they did not do to avoid the deliberate torture methods. Meanwhile, time and valuable resources are squandered, which could have been used by the security forces more efficiently if they had respected the integrity of the procedures in the first place.

The other issue is the structure of the military courts, which often curbs the right to a just trial, including the right to a trial in front of a competent, independent, and neutral court, as well as the right to a public trial. As per the report, the minister of defence assigns the judges, most of whom are military officers who are not required to have a degree or a legal training, and who are employed at the Ministry of Defence. Meanwhile, neither human rights organizations nor journalists can monitor the trials without prior consent from the judge of the hearing.

“To be fair, the military told us that the majority of the judges have received legal training or a law degree,” Benchemsi said, however expressing fears that the military hierarchy may impact the rulings of the judge/officer due to pressure from higher ranks. From the legislative side, the Lebanese parliament recently passed a law to establish a National Human Rights Institute, which will include a committee to investigate the use of torture and abuse in detention areas. However, Lebanon is yet to issue legislation criminalizing all torture methods, as per the United Nations Convention against Torture.