It is just before 5:00 on an August evening. The vibrant yellow awning of Tamam: Fine Palestinian Cuisine proclaims itself brightly on a heavily trafficked stretch of East Hastings Street in Vancouver’s Hastings-Sunrise neighbourhood. Although it is a few minutes before opening time, a couple is already seated at a table beneath two paintings. One painting depicts the Dome of the Rock, and the other, a street in Jerusalem’s Old City, both by chef and artist Tamam Al-Zobaidi. Within an hour, the interior seating area and the solarium are nearly full of couples, families, and groups of friends sharing plates of hummus, fattoush, freekeh, kebab, and waraq. 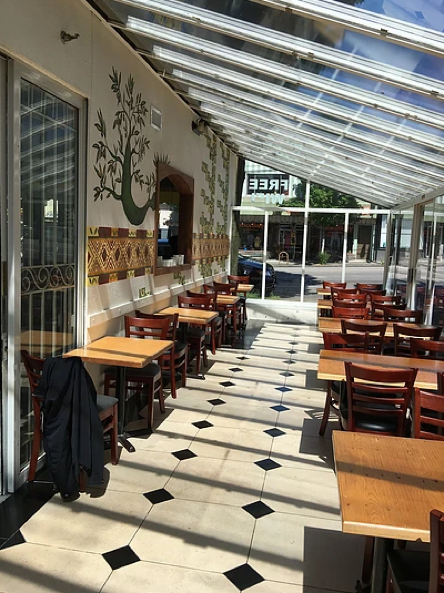 Sobhi Al-Zobaidi, a film maker, writer, and academic who owns Tamam with his wife, is pursuing a Ph.D. at Simon Fraser University in which he explores memory and what he calls “placelessness” – a loss of homeland – in film and literature. He has decided to include a discussion of food in his research, a change that came out of his experiences working in the restaurant. Al-Zobaidi notes how memory functions among diasporic communities, and especially how Palestinians negotiate a loss of place and space through literature and art, observing that “food becomes a site upon which we reinvent ourselves.”

Palestinians living on Canada's West Coast are finding space in the #kitchen to discuss identity, memory, trauma, and community.

Al-Zobaidi notes that cultural preservation takes place through recurring actions, traditions, storytelling, and, of course, the repetitious processes of intergenerational recipe transmission. Palestinians living in diasporic communities, like many migrant and refugee groups, preserve a sense of home in the midst of disruption through the maintenance of traditions. One of the most intimate of these is cuisine, and Tamam: Fine Palestinian Cuisine recreates, on a daily basis, the smells, sounds, and flavours of a home that the Al-Zobaidi family no longer inhabits.

Palestinian chefs living in North America are using the language of #food to start conversations about the politics of identity and culture.

#Eating is a universal act, a fact that encourages some to believe in the potential of #gastrodiplomacy. Some West Coast #Palestinian #chefs are using food to challenge stereotypes about their identity.

The term “cuisine” is frequently used but rarely defined, although attempting to grapple with its meaning can shed light on why this amorphous topic can be both evocative and divisive. Cuisine encompasses ingredients, methods of flavour combination, methods of cooking, and practices of eating within certain historical and geographical contexts. Cuisine stretches beyond a set list of ingredients, and is too porous, mobile, and dynamic to allow strict delimitations, yet it connects people to childhood memories, familial traditions, and regional and national identity. 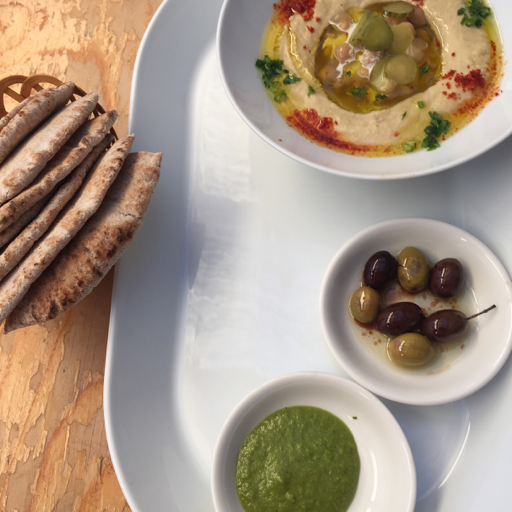 Hummus with olives, zhoug, and pita.

In part because cuisine is bound up in identity, and in part because this concept connotes organic ties between groups of people and a specific geography, the decision to open an eating establishment serving Palestinian cuisine, then, can be controversial. For instance, the Palestinian bakery Reem’s California faced criticism, protests, and death threats for its political stance, while Pittsburgh-based Conflict Kitchen temporarily closed after receiving death threats because the wrapping used for its menu items contained text from interviews with Palestinians about experiences of violence. According to Al-Zobaidi, Tamam has received a wide range of responses, from curiosity about Palestinian cuisine, to resistance and hostility.

Some of Tamam’s patrons are Arab, and visit Tamam to dine out on familiar and comforting smells, textures, and flavours. However, the majority of the clientele are not Arab, in part due to the fact that the province of British Columbia does not have a large Palestinian or Arab population. The majority of this population lives in Vancouver; over 14 000 of the 17 480 first-language Arabic speakers in British Columbia live in Vancouver, according to the 2016 Canadian census. The majority of customers, Al-Zobaidi says, come without any knowledge about Palestinian cuisine, and wish to learn about Palestinian food, history, and culture. However, he has also faced customers who deny the very existence of Palestinian cuisine, asserting that the food he serves is, in fact, Israeli, illustrating that food can nourish dialogue and empathy only when all parties involved come to the table with the desire to learn and understand.

Distinguishing food from other cultural practices, Al-Zobaidi reflects that “food connects you to geography while everything else connects you to history.” In the areas of film, writing, and academia, people often come with pre-conceived notions. But, as Al-Zobaidi observes, with food, it hits the stomach, not the mind, first, and so can work more effectively than any polemical text or theoretical writing.

Food is sensual, intimate, and immediate, and therefore an equalizing and effective vehicle of cultural extension and an organic starting point for dialogue with those who wish to learn more about Palestinian culture, politics, and history. Agriculture and food thus play important and daily roles in creating and maintaining regional and national identity, as they are physical manifestations of ideological and imaginative ties between people and land.

The concept of gastrodiplomacy, or the use of food to facilitate dialogue and understanding between individuals and groups experiencing conflict, has received increasing attention in recent years. Indeed, Public Diplomacy Magazine’s winter 2014 issue was entirely devoted to gastrodiplomacy. Some Palestinian and Israeli chefs believe that gastrodiplomacy can make positive contributions to relationships between Palestinians and Israelis, in addition to introducing their cultures to others.

Two Vancouver-based chefs, Haitham El Khatib (owner and operator of Aleph Eatery) and Itamar Shani (owner of Chickpea) collaborated to create a three-month series called “Taste of Coexistence lunches” at the University of British Columbia. El Khatib, a Palestinian who grew up in a refugee camp in Lebanon, and Shani, who grew up on an Israeli settlement, became friends after immigrating to Canada.

The aim of their lunch series was to demonstrate that Palestinians and Israelis are not inherently different or adversarial. The opportunity for students and faculty to discuss topics related to Palestine/Israel while sharing food allowed both chefs to promote messages of coexistence through the artistic and nourishing medium of food. Aleph’s website articulates this belief, writing that: “Food does not take sides and I wish to express this story through creating a place out of the similarities in the Middle East rather than focusing on the differences…something I hope Vancouver will embrace too.”

‘It’s not in my hands’: Syria’s food vendors and cafes are struggling to deal with the country’s gas crisis

‘An erasure of culture’: how Israel appropriates Arab and Persian Jewish cuisine