"And to Peter's right, my girl, who healed the crippled man, and to Virgin Mary, the Pontiffs and the Righteous Shepherd, to Saint George and the cross, to the Church and Christ, to the priest and to the bishop with the rung bell on the roofs”... This is part of a ‘Christian’ song sung by the late Sudanese musician Hassan Khalifa Al-Atbrawi. The song – written to one of the Coptic girls – expresses in a similar style to other songs and poems, written in the same regard about his assumption and speaks of an impossible love. This is inhibited by Orthodox Christianity, which is something that Sudanese people of Coptic origins themselves condemn. 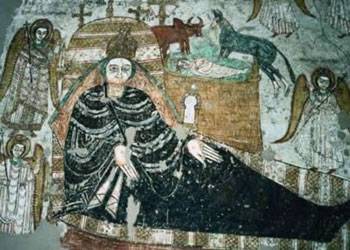 The Story Of Mizraim And Kush

In the 4th century AD, history recorded the first entry of the Copts to Sudan, where they spread Orthodox Christianity in the state of Nubia to the north. Then they came back again, with the Turkish-Egyptian occupation of the country in 1821 as staff and employees. Their presence in Sudan has persisted since then. However, their influx in large numbers only began following the collapse of the Mahdist State, or the Sudanese Mahdiyya (1885-1898), that is, coinciding with the start of the Anglo-Egyptian occupation of Sudan (1898-1955).

Coptic Father Filotheos Faraj says in his book “Copts of Sudan”: “Regarding the link between Egypt and Sudan, in the 10th chapter of the Book of Genesis, the two sons of Ham the son of Adam - who are (Mizraim) the father of the Egyptians, to whom Egyptian regions were attributed, and (Kush) the father of the Kushites, who are descendants of the northern Sudan region – which means that Mizraim and Kush are brothers of the same blood”.

Given that they are the builders of most contemporary life facilities – after they introduced the essence of modern life to them – Copts worked in government departments and domains such as the post, telegraph, telegram, railway, financial and accounting departments, labor, agriculture, forestry and the judiciary, and some of them were even delegated to research and exploration throughout the corners of Sudan. They were also active in artisanal and private businesses, as they were the first to introduce modern hairdressing salons and barbershops in the modern sense, as well as secondary industries such as textiles, localizing the textile industry among others at home.

The Copts are present in most of the main cities of Sudan, with their largest concentration in the city of Atbara to the north, where they worked in the railway, telegraph and trade. There is also another large congregation in Omdurman, west of the capital Khartoum.

Copts played a major political, cultural, social, and educational role in the modern history of Sudan, establishing the first private school for girls in 1902, then the Coptic Library in 1908, which was filled with the most prominent historical books and manuscripts, and where plays and seminars were held.

Copts played a major political, cultural, social, and educational role in the modern history of Sudan, establishing schools and a library filled with the most prominent historical books and manuscripts, and where plays and seminars were held

Likewise, they also established the Coptic College for Girls in 1924 and the Coptic College for Boys in 1919, while the first woman to enter the Gordon Memorial College (present-day ‘University of Khartoum’) was a Copt called Angela Isaac, as Filotheos Faraj mentions in his book “Copts of Sudan”. These all come in addition to their contribution to establishing the Sudanese Mars and Al-Hilal sports clubs, as well as all civil society institutions and liberation movements that were involved in the struggle against the British occupation of Sudan. 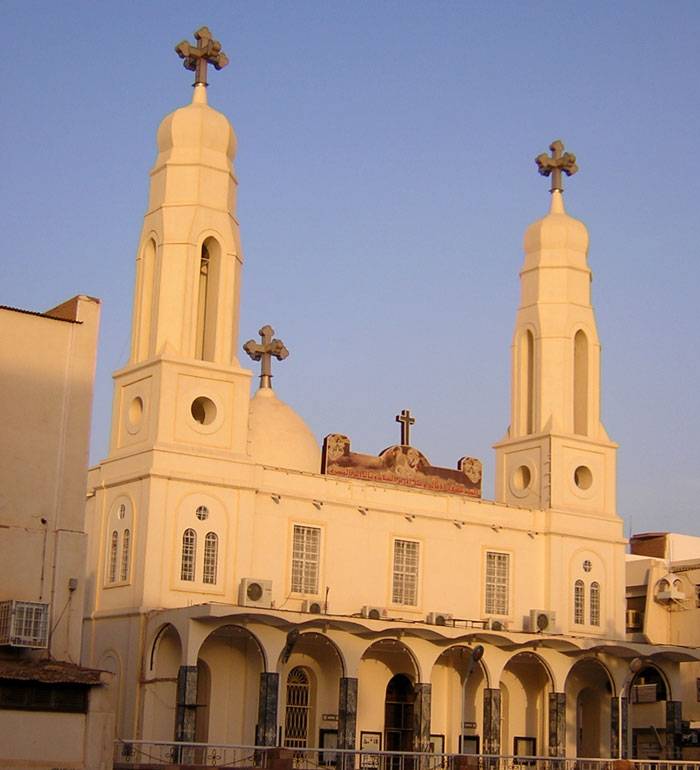 The Coptic Cathedral of the Virgin St. Mary in Khartoum, Sudan

Among the most prominent Coptic figures that influenced the cultural arena is George Mashreqi, whose shop selling lemonade was something of a cultural forum in Omdurman, and was frequented by the late Egyptian President Gamal Abdel Nasser and Abdel Hakim Amer, when they were two officers serving in Sudan, in addition to a group of novelists and artists such as Ibrahim al-Kashif and Osman el-Shafeea’.

A priest in the Cathedral of the Virgin St. Mary in Khartoum – the oldest Coptic church built in Sudan during the modern period – Pastor Boulos (Paul) Fouad, 65, tells Raseef22 that work began on it in 1904 until Pope Kyrillos V inaugurated it in 1909. He adds that their religious teachings urge them to distance themselves from evil, in whatever form it may be, so Copts always prefer to live life in peace and love.

Politically, the highest position the Copts held was that of a minister, something that had only occurred twice, with Wadih Habashi getting the Ministry of Agriculture and Maurice Sidra the Ministry of Health during the era of the late Sudanese President Jaafar Nimeiry. This all comes in light of how Copts are the most educated among the Sudanese people, being extremely competent in various fields. Along with the rest of the citizens, they fought with political action against British colonialism, with some of their children joining parties such as the National Umma Party, the Southern Sudan Federal Party, and the Sudanese Communist Party. 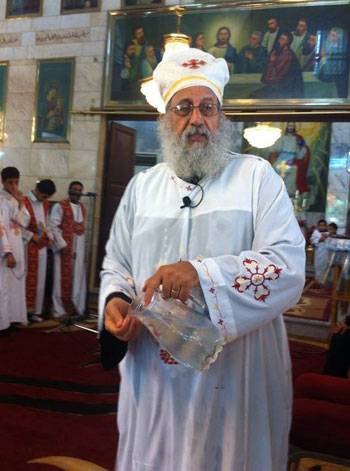 Pastor Boulos Fouad says, “Copts feel their distinctive Sudanese identity,” and indicates that he has absolutely no qualms over sleeping in the home of his Muslim neighbors. He says he would do so without the slightest fear, as Copts and their contributions to Sudanese life were widely recognized and valued by the Sudanese community, and the values ​​of coexistence were high.

Pastor Boulos Fouad goes on to add that despite the changes in society due to the instability of the political situation, following their massive emigration in the early years of the 90s, this was accompanied by the departure of tens of thousands of other Sudanese individuals who knew the history of Copts well and coexisted with them peacefully.

A History Of Coexistence Ravaged By Political Volatilities

Ever since the late Sudanese President Jaafar Nimeiry announced the implementation of Islamic Sharia laws in 1983, the structure of peaceful civil life based on the coexistence of cultures, races and religions was undone. This rift between the Sudanese people was fully realized during the rule of Omar al-Bashir, who does not recognize pluralism. He has repeatedly declared Sudan an Arab Muslim country, ignoring non-Arab and non-Muslim religions and cultures within.

Ever since the late Sudanese President Jaafar Nimeiry announced the implementation of Islamic Sharia laws in 1983, the structure of peaceful civil life based on the coexistence of cultures, races and religions was undone.

Adel Keller, a Sudanese journalist interested in cases and issues pertaining to minorities, tells Raseef22, “Copts are an integral component of the social fabric of Sudan. It must be preserved while the shocking and discriminatory laws of citizenship should be removed, as well as the law issued by the late President General Ibrahim Abboud in 1963 prohibiting missionary activity, and the nationalization which saw Copts' properties confiscated in 1970.”

Keller also stresses the removal of the conflict between the laws in force and the document of rights in the Interim National Constitution of the Republic of Sudan (2005) which guarantees freedom of religion and belief and calls for the abolition of unilateralism and promoting inclusivity in various state institutions.

Pastor Boulos Fouad sees that allocating only one hour per week to Copts on the country’s terrestrial television channel, may not be something that would help consolidate the intended/desired spirit of coexistence and cohabitation.

Keller notes, “The current situation in Sudan neither supports nor promotes a rights-based outlook for different religious groups and identities, since extremist ideologies prevent the acceptance of the Christian ‘other’.” Moreover, he adds that following the secession of South Sudan on July 9th, 2011, several Christian sects were denied the right to celebrate their religious occasions – including the tradition to attend mass and celebrate collectively on Christmas Eve.

In 2014 and in its annual report on religious freedoms and beliefs, the US Foreign Ministry placed Sudan third on the list for worst performing countries in terms of honoring religious liberties.

Keller mentions that the dissolution and steady disappearance of the middle class helped undermine other forms of coexistence. The abject education system, in addition, created a rift between the Coptic sects and other Sudanese, especially when comparing the situation to a rich history of tolerance and societal cohesion.

Father Filotheos Faraj estimated the number of Sudanese Copts at around 3 million, both inside Sudan and outside. Others, on the other hand, put the number much lower in the few hundred thousands.

Pastor Boulos Fouad states that an official count of the Copts is in progress for societal reasons. He adds that Sudanese State Registry documents have finally recognized ‘Copts’ as a tribe – similar to other Sudanese tribes – although a large portion Sudanese intellectuals and politicians denounce the stipulation of selecting a ‘tribe’ category when filing for one’s nationality or social security number.