I had just finished a strenuous work out. In the shower I am startled by a shudder and the sound of falling and things breaking. Is that the crane from the work site that came crashing down? I peak out of the window.  People are running toward the work site.  My youngest daughter suddenly storms into the bathroom all teary and panicky, catching her breath while screaming and muttering about that sounded like  “all is broken, all is broken” . I run with a towel around my waste, dripping and wetting all of the apartment frantically towards the living room. Chaos.  Scenes of an apocalypse.

The 7 x 3 main glass aluminum façade crashed on the thrashed furniture of the main living room where I was doing planks just 10 minutes earlier.   The gym was closed due to Covid - 19.   Had I still been there I would have been crushed by the 300 kg triple glazed panes for sure.  I rush to the balcony and look East.  I don’t trust my eyes as I hardly believe the eerie scene. A billowing odd colored red crimson mushroom cloud rises up behind the buildings.  A bomb for sure I think.  Who was targeted this time ? Who did it ? My mind races and flashes back to the memories of the Hariri bombing.  The tribunal’s verdict is supposed to come out in a few days.  Is this a coincidence? Is this an attempt to eclipse it with a bomb and a distraction? Another smoke screen? But for sure real smoke was still rising.

I rush to my phone to call my wife and my eldest daughter.  Luckily all are safe.  Unlucky are the unfortunate 100 dead.  I thank my lucky stars that my loved ones are safe and pray for the families of the victim to give them strength to endure this tragedy.   Our hearts go out to them. I am about to tear, but have to catch myself as I hug my sobbing daughter.

This event is one that will define us.  It is like the 1982 war, the murder of Hariri,  or the attack on the World Trade Center in New York.  Each one of us will remember where he or she was at the time the blast occurred. We are marked forever.  This is a seismic event.  It comes after a series of failures by the ruling kleptocratic mafia cabal.  When we thought we had reached rock bottom, we are surprised yet again by more incompetence and epic failures by the ‘irresponsibly responsible’.

The blast documented in a series of videos captured by many Beirutis, from different angles looks surreal.  Videos show a fire that had erupted in Ward 12.  It seems for 20 minutes ago.   Then a series of random mini munition ‘firecracker’ like explosions, followed by a sudden larger explosion of dark red crimson mushroom that was swiftly swallowed by an atomic-like white much larger mushroom head that swelled and soared in a split second that exploded into a racing shock wave ravaging  everything in its path.

The shock wave moved 750 m in 2.18 seconds.   According to some early information the blast measured 4.5 on the Richter scale.  According to specialists the amount of energy released was around 61k GJ equivalent to 14.6 kilotons. Some rumors place it as the third largest blast ever after Hiroshima and Nagasaki. This has yet to be confirmed and sounds unreal.  It even reached Beit Meri and shattered windows in the famous Hotel al Bustan.  The grain silos sitting a few meters away from where Ward 12 used to sit, obliterated.  The land where the hangar stood, only yesterday, has been dredged into a 50 meter diameter gaping crater, sucking the sea in, and merging with the Port harbor.  The Port of Beirut our pride of trans-shipment reduced to smithereens.   Gemaize,  Mar Mikaaael  and Acharafieh and the vicinity the Port destroyed with, images of mayhem and destruction cascading on WhatsApp. 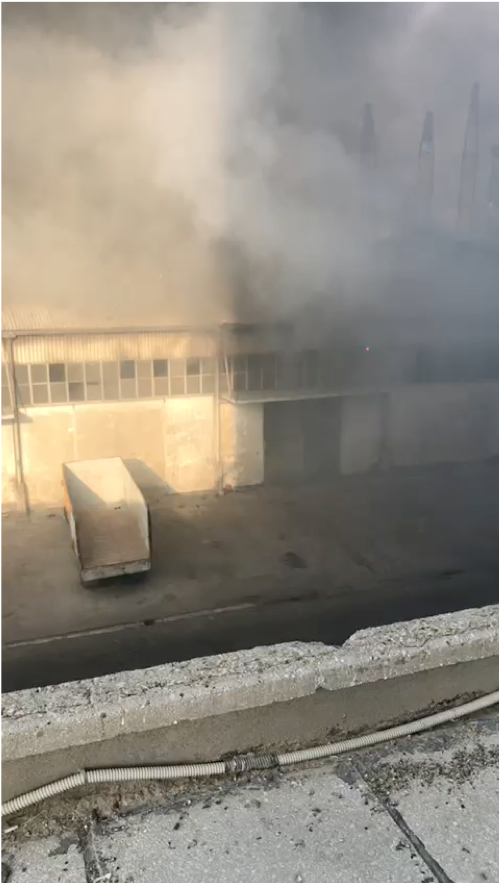 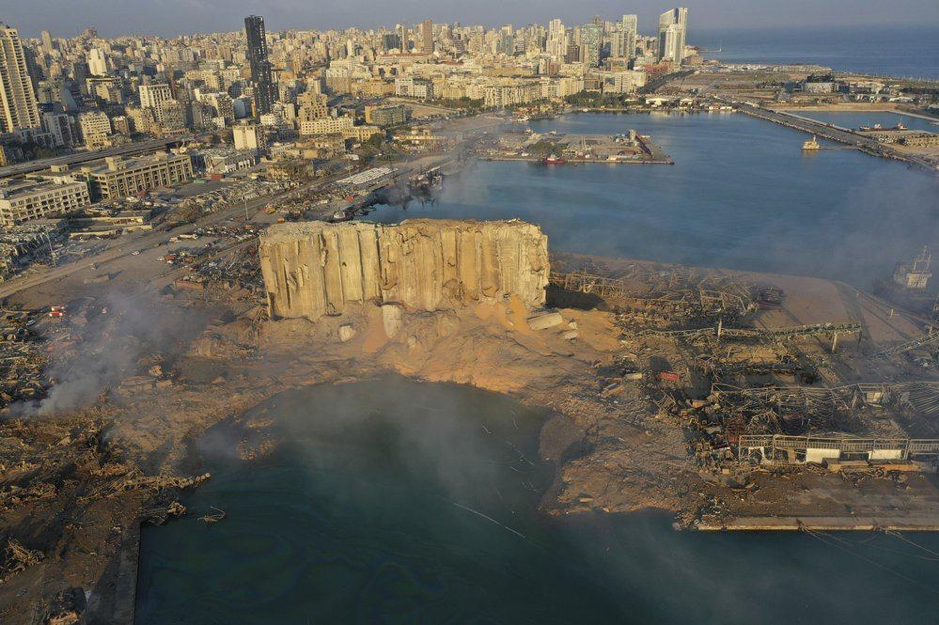 Declaring #Beirut a disaster stricken city and a state of emergency will not alleviate the pain and the suffering and the disgust of the People of Lebanon. Calling for national unity is another way to disguise incompetence and guilt to evade responsibility

The latest count at the time of writing this story was 100 dead and 3500 injuries. Many are still looking for loved ones who are gone missing.  Many initiatives have emerged to locate victims, on social media ,like the Instagram account @locatingvictimsbeirut to facilitate efforts.  We all pray for those who have been lost or are still missing and hope for them to be found safe and sound.  I personally know three of the people that perished. My daughter a few others.  I will not call them martyrs, however. That is what officials insist on referring to them as. This is their way to disguise their guilt by claiming they are martyrs and wiping their hand clean from any responsibility.  It is beyond us.  It is an a catasrophy and an act of God and not one of negligence or bad faith, if any.  I would rather call them homicide victims, form manslaughter or at the very least from criminal gross negligence.  I won’t shy away from even calling them victims of ‘war crimes’, as the size of the explosion is one from a ‘weapon of mass destruction’.  Again our hearts go out to the victims.  May they find peace and strength in these difficult times.

Many scenarios and explanations were pushed forward.

At first the official story by the Lebanese News Agency NNA was that a warehouse full of fireworks exploded.  This joke of an explanation, was right away dismissed by the Public as the size of the blast laughed it off.

Then came the rumors of the Israelis bombing the Port, specifically Ward 12, that was stockpiling Hezbollah weapons and/or targeting the Ammonium Nitrate stock.   But no proof of planes nor drones were put forth, as no one heard any overhead planes.   Those are usually are clearly heard when they bomb distant Syria, from Lebanese airspace.  So how come we did not hear them if they were bombing Beirut itself?

The 7 by 3 meter glass facade crashed on the furniture and living room floor where I was doing planks just 10 minutes earlier. I would have surely been crushed by the 300 kg panes. I rush to the balcony and look east. A bomb for sure I thought #Lebanon

The most plausible explanation is that stocked Ammonium Nitrate in Ward 12, exploded.  This is the early explanation confirmed by the incompetent and Hezbollah chosen Prime Minister Hassan Diab who seems to have known about this even before the blast occurred and did nothing about it. 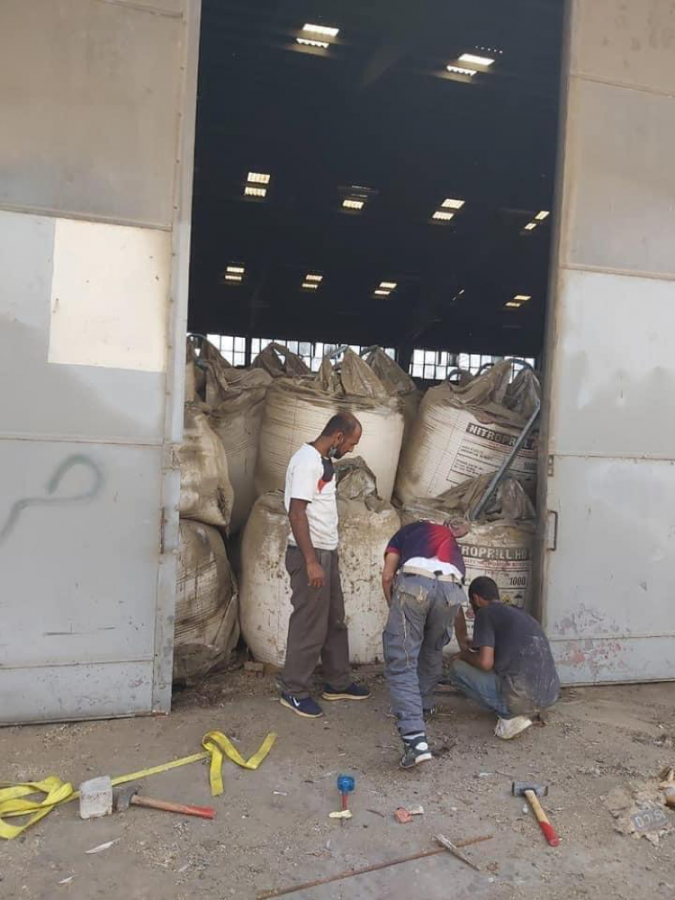 According to Baer an ex. CIA operative there could have been more than just Ammonium Nitrate, and claims that there must have been some munitions stored as he points to the color of the ‘orange’ mushroom as proof.  But what triggered it?  This remains elusive.  Irrespective, if this was due to a spark from the welding of a door to close off an open hatch or the result of sabotage, or even from an Israeli targeted bombing, the presence of such an amount 2700 tons (or even some claims of 26,000 tons still unconfirmed), amidst residential neighborhood is the least criminal if not worthy of an international war crime tribunal.   This amount would represent for sure and could be defined as  a ‘weapon of mass destruction’ as proven by the scope of death, injury and destruction.

The presence of Ammonium Nitrate has been in the port since at least 5/12/2014, as proven by a 2017 letter from the head of customs Badri Daher addressed to the Judge of Urgent Matters stating the imminent danger of the presence of the stockpile of weapons grade.  It seems that it was not so urgent as the letter refers to 3 years prior mention.  The stock seems to have come from a vessel christened Rhosos, that was sailing from Georgia to Madacascar.  Why was it kept all this time? Who would want to keep it? And for what purpose?

According to the records, the Prime minister at the time of the shipment was Najib Mikati, the minister of Transportation Ghazi Aridi, the head of customs Shafik Merhi, the Judges of Urgent Matters for 2014 Nadim Zouein, 2015 Zalfa Al Hassan, 2016 Jad Maalouf and 2020 Hala Naha, who seem obviously not have responded to the head of customs requests.

We are forever marked. This seismic event comes after a series of failures by the ruling kleptocrats mafia cabal. Just when we thought we reached rock bottom, we are surprised by more incompetence and epic failures by the ‘irresponsibly responsible’

But for sure the list of guilty does not stop there.  It for sure includes the ruling corrupt system of Kleptocrats of the past 30 years and the coalition of Hezbollah, Amal and Aoun.

It is well known who controls customs, ports and border crossings.  Did they want to retain the stock to use it for the manufacturing of weapons? They will surely deny this.

The strange irony is that Hassan Nasrallah had alluded to hitting a stock pile of Ammonium Nitrate in Haifa with Hezbollah missiles.

The reverse happened as not Haifa but Beirut was targeted!  What is the point of liberating Jerusalem and wishing to pray there some day, while we autodestruct and destroy Beirut?  So who is the traitor now? Who are they serving? Foreign agendas for sure and not Lebanon’s and surely not the Beirutis’.

The Ruling Corrupt System who have controls of all branches of government will find a scapegoat and make him or her pay.  The system is rigged and unfair and they will try to wiggle away from this one, once more. How can the guilty police themselves?

The empty words by the ‘irresponsible responsible’ Prime Minister, irrelevant President or any other official for that matter, will not be accepted, as this occurrence is no trivial matter.

Calling Beirut a disaster stricken city and the state of emergency will not alleviate the pain and the suffering and the disgust of the People.

Calling for national unity is another way to disguise their incompetence and their guilt to try to evade one more time responsibility, and try to find a way out for them.

Calling for help from foreign powers to receive aid will also be used by the Mafia Cabal to remain in power and perpetuate their hold on power.

These tactics will not be accepted by the People who will for sure storm the streets once again, and hopefully this time, bring all the Cartel all down for good, this time.  If not, we are all doomed to a failed state, run by thugs and the Kleptocrats.

It is time for the Lebanese to step up and own their destiny.