Lebanon stands today on the verge of a complete economic and fiscal collapse that will affect the Lebanese government, the Lebanese banks, and most importantly may impose a human rights disaster on the Lebanese people, the likes of which the country has not seen in the modern era. Things need not go that way though, but very courageous steps are needed to avoid this outcome.

Since 1991, after the signing of the Taef accord that officially ended the civil war that ravaged Lebanon since 1975, both the country’s external debt and internal debt have ballooned to very dangerous levels. Lebanese banks, who constitute the largest sector of the economy, approximately 8% of GDP, hold a disproportionate amount of their assets in the form of Lebanese government and central bank debt, with estimates from S&P ranging from 57% of total assets (exposed to the central bank alone) to as high as 74% for some banks to the sovereign overall. This relationship guarantees that if Lebanon should default on its debt, all the Lebanese banks’ equity would be wiped out.

Please see below a chart showing the historical growth of both internal and external debt since the Taef accord. Lebanon ranks today as one of the top 3 most indebted countries in the world, along with Japan and Greece. That is not a problem for Japan which has a very high savings rate or Greece with a hard EU backstop, but is very worrying for Lebanon. 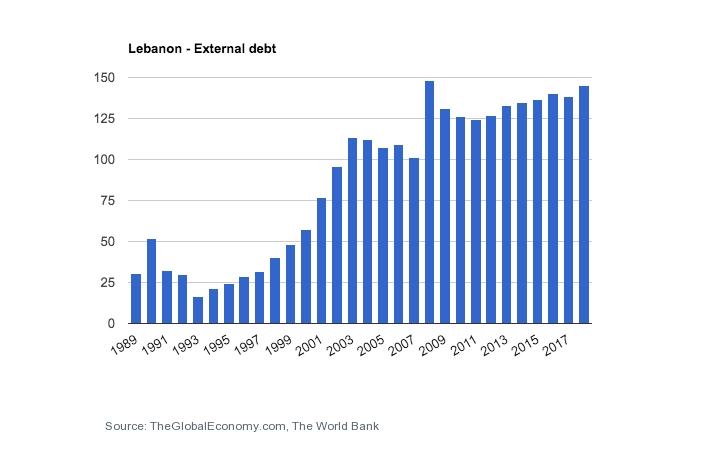 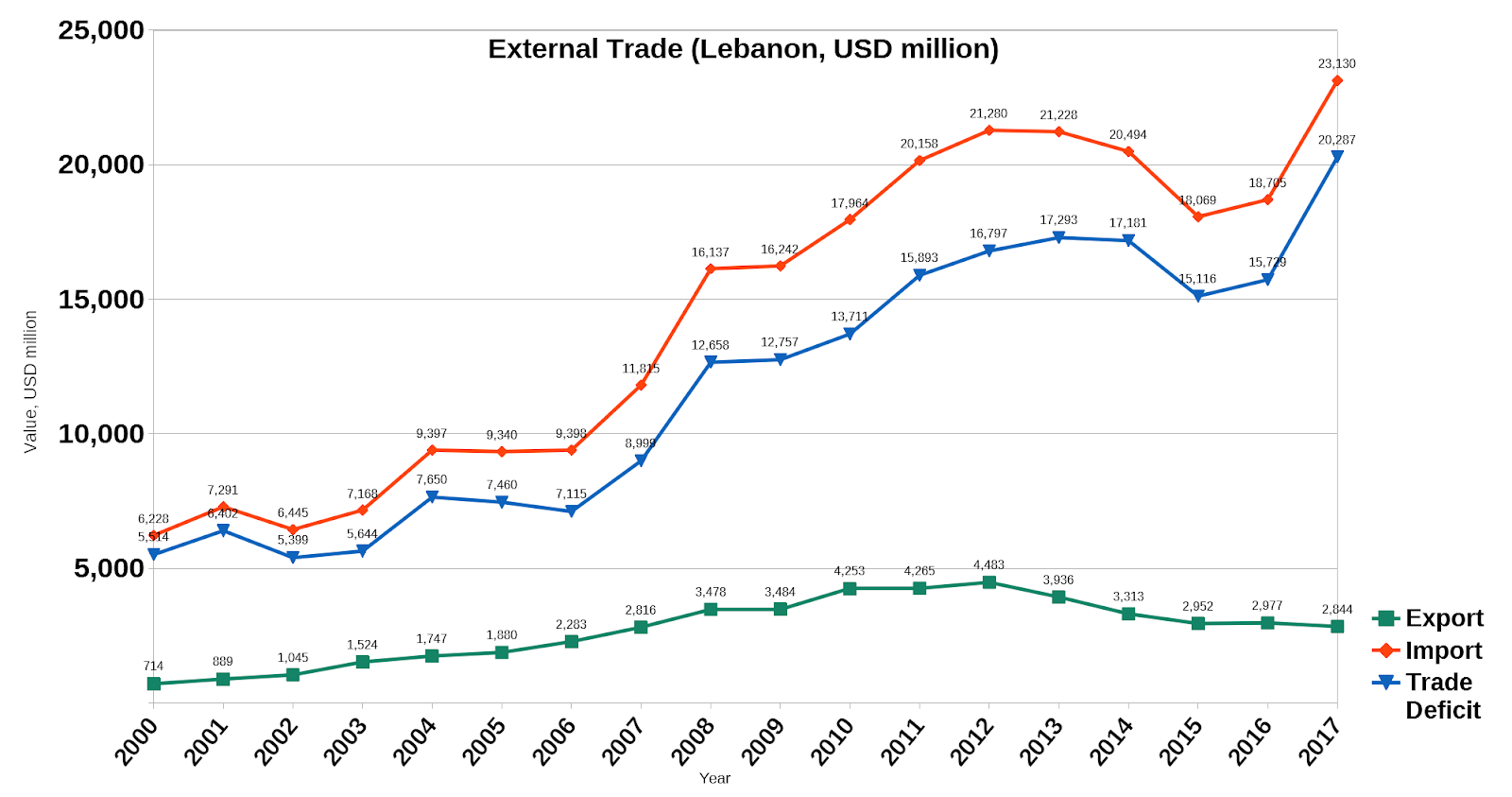 What the above charts show us is that the trajectory of the Lebanese economy and financial system have been progressively going from bad to worse, resulting today in an unprecedent situation where the prospect of a Government default on its debt is almost certain. The question now is ‘when’, not ‘if’. The three international rating agencies have already downgraded Lebanon to the lowest or near the lowest credit rating. Since no company or bank in Lebanon can have a higher credit rating than the sovereign, this means that any Lebanese bank or businesses would have a very tough time raising any financing from the global capital markets. If by miracle they were able to, the interest rate demanded would most certainly be prohibitive.

Given the hole Lebanon is currently in, and the total mistrust of the people in their government, the only way to avoid a major catastrophe is to successfully claw back at least half of the $90 billion that was misappropriated by corrupt politicians.

With the annual deficit running at a rate of $6.635 Billion, or 11.72% of GDP, the future looks very bleak. Both Lebanon’s ability to pay the interest on its current debt and the probability of the Lebanese government being able to refinance expiring debt are virtually nil. The global markets have said so with their actions. Please see below the 5 Year Credit Default Swap prices for Lebanese debt. Below the Credit Default Swap rates, you can see a bar chart showing the amount of Lebanese debt that needs to be refinanced over the coming few years, the recent evolution of the top two listed Lebanese bank equity prices and the sharp invesrion of the Lebanese sovereign credit curve. 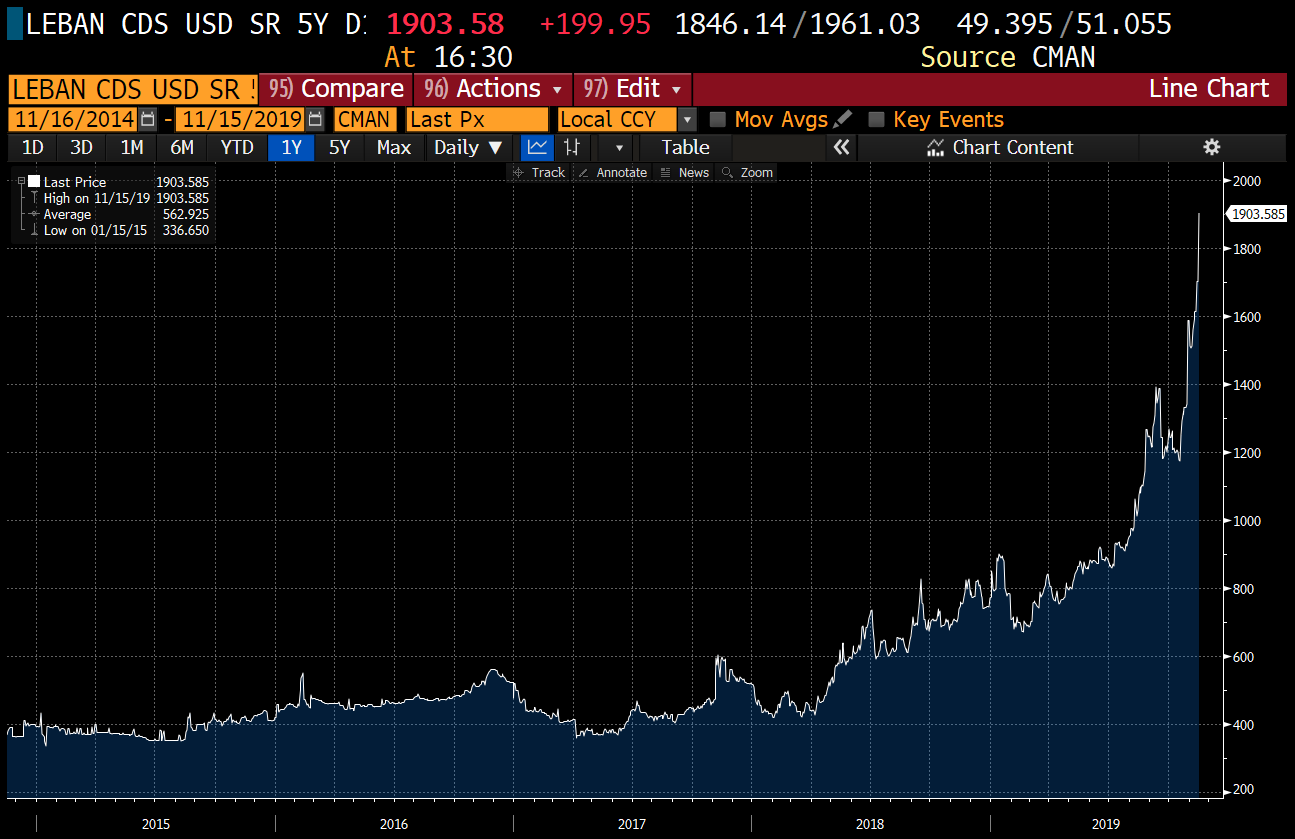 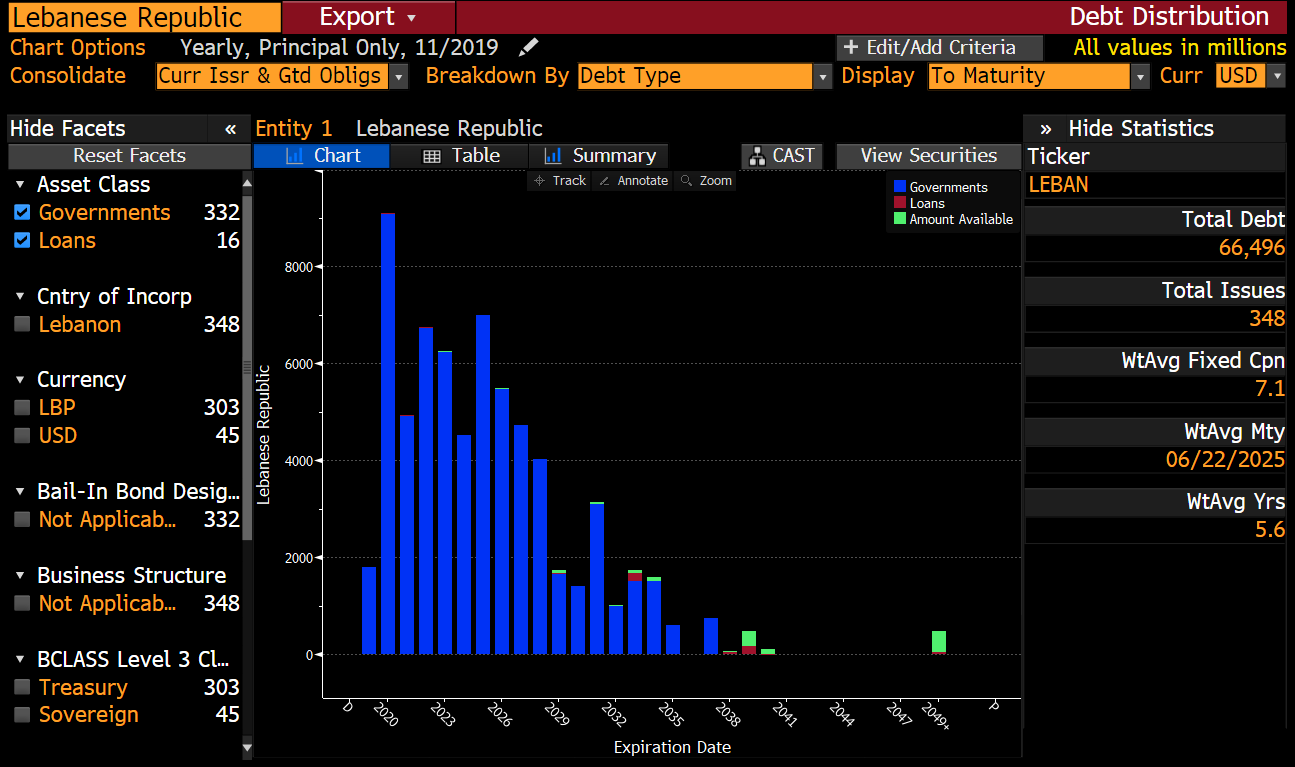 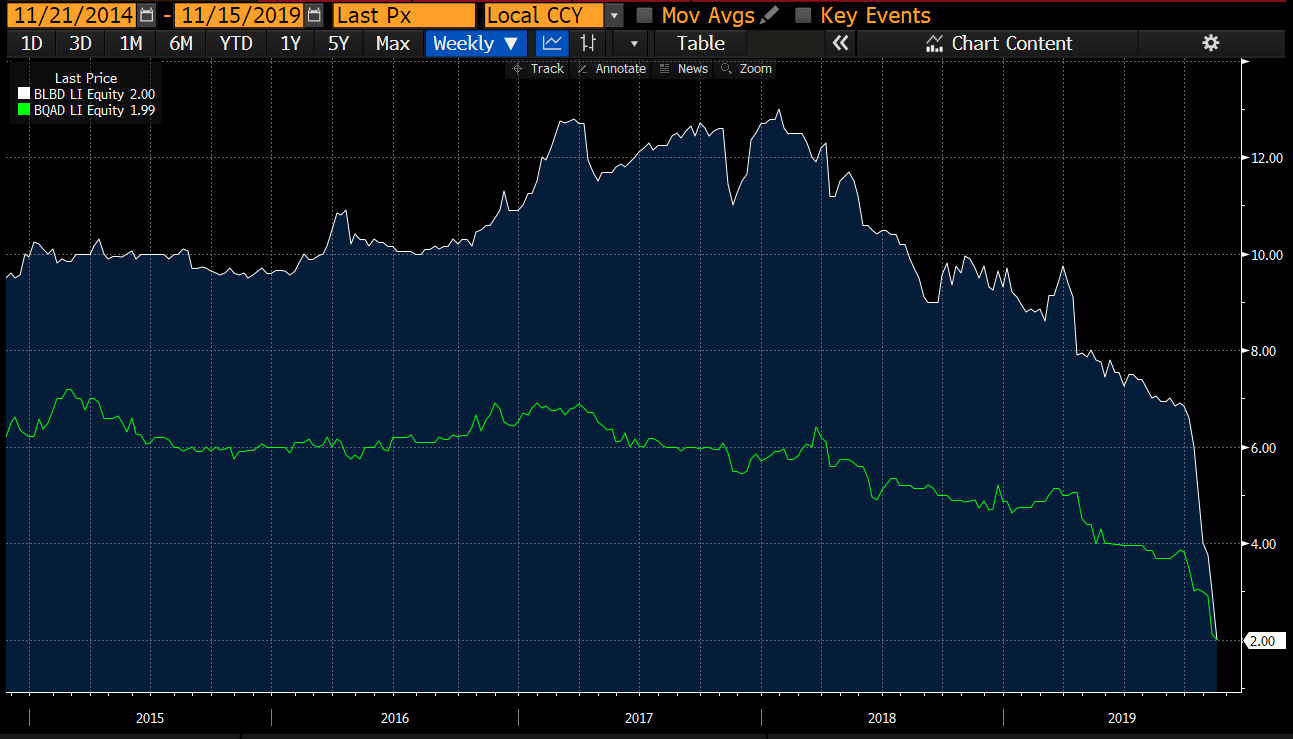 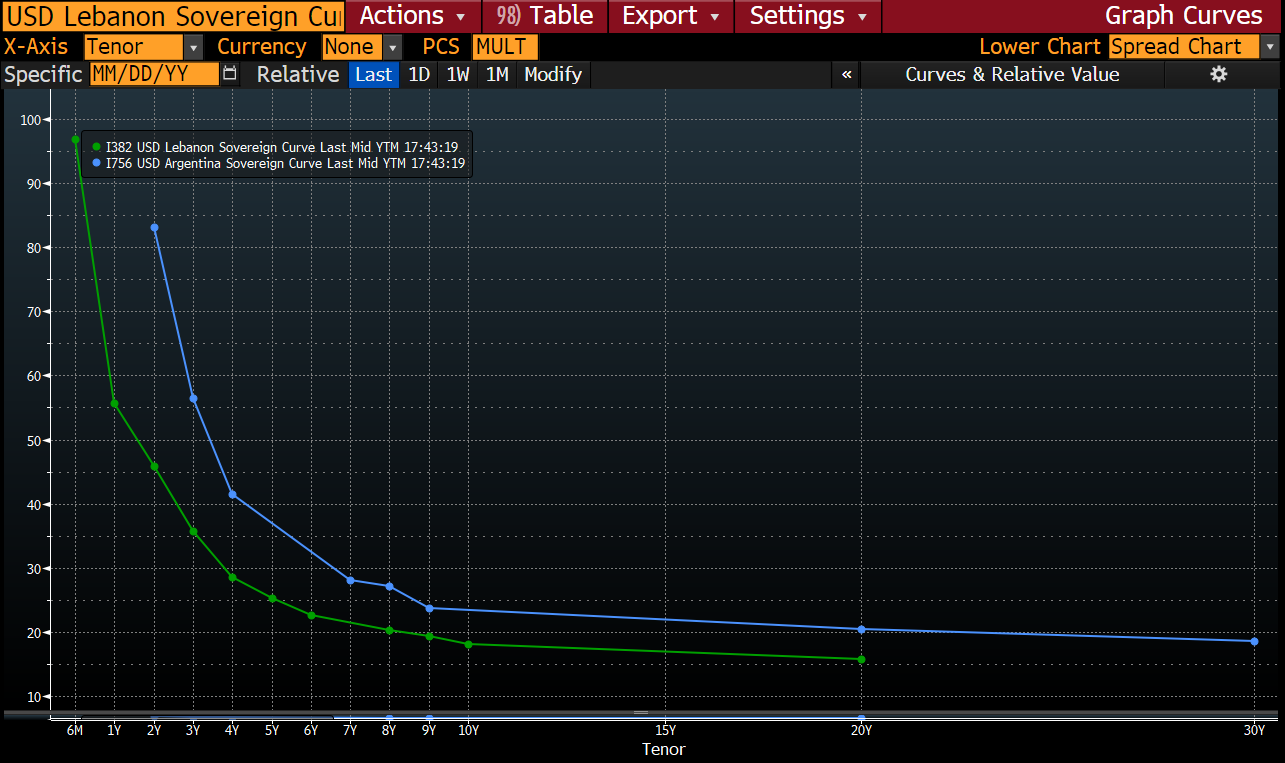 What the snap economic picture above shows is that the Lebanese government is already essentially bankrupt, and any day, can default on its debt. When that occurs, as argued above, Lebanese banks would go bankrupt, and the fate of individual depositors would be very uncertain.

Lebanon is currently saddled with 35% youth unemployment and 24% female labor force participation rate as per the World Bank statistics. The latest available data also show that more than 40 per cent of males and nearly half of all female Lebanese graduates emigrated between 1999 and 2007 (according to the FT). Not a great socio-economic backdrop to say the least.

Let’s play out the scenario of what happens if Lebanon goes bankrupt. One of the first consequences would be the inability for the Lebanese government to pay government employees.

Lebanon boasts one of the largest numbers of armed forces per capita. Latest figures show that between active and retired armed forces, Lebanon has a payroll of 180,000. Many, if not most, make very little income and live hand-to-mouth. They cannot afford to go a month without being paid. Even if they do manage to get paid in Lebanese Pounds as all government employees, due to the inflation that would accompany any collapse of this magnitude, it is very likely that whatever Lebanese pounds they have saved would essentially be worthless.

Aside from the humanitarian disaster that would accompany the scenario above, and the mass migration out of Lebanon of existing Syrian refugees, possibly Palestinian refugees and Lebanese refugees, the most consequential repercussion would come if the army disintegrates for lack of payroll.

The same ruling class we have had for the last 30 years that led us to this point is not going to ask for assistance from the IMF. We need a technocratic government made up of specialists not political appointees who have zero experience.

Should that happen, the risk of Lebanon devolving into a Syrian model would be significant. History shows us that systems abhor vacuums. If the government collapses, the most organized party on the ground would rise to fill that void. In the case of Egypt under Mubarak, the Muslim Brotherhood filled the gap. In the case of Lebanon, that would fall to Hezbollah. Should that happen, it would bring with it increased sanctions from the US at the worst possible time to have them imposed on Lebanon.

Again, looking at the recent history, many countries in the region would not be happy with Hezbollah taking over Lebanon. They would start arming some of the most extreme elements in Lebanon who are anti Hezbollah, and de facto, we would have a situation that would be even worse than Syria given the economic condition that would prevail in Lebanon.

The Only Way Out

Typically, when countries face these kinds of existential threats , the country asks for assistance from the IMF and the World Bank for an emergency rescue package (something that the Lebanese government has not done to date in one of the most baffling series of actions they have taken), some cash infusions of the type Cedre was about to disburse, privatization of major government owned services, combined with severe austerity measures. This process cannot be accomplished by the same ruling class we have had for the last 30 years that led us to this point. They have had plenty of time to do the right thing, and they didn’t. It is high time for a new approach. We need a purely technocratic government made up of specialists in their ministries and not political appointees who have zero experience in the role their ministries should play. Even with all the hard steps outlined above, Lebanon would still need to face a very difficult path, but one that would eventually lead to recovery.

By estimation of various credible institutions, since the Taef accord, about $90billion have been mis-appropriated from the Lebanese treasury by corrupt Lebanese politicians and their cronies. The current fiscal situation in Lebanon is so dire that it is not realistic to assume that the usual recovery model outlined above would be sufficient without a major claw back of at least 50-70% of the misappropriated funds.

In today’s Lebanon, even this action may not be enough. Given the hole Lebanon is currently in, and the total mistrust of the people in their government (e.g. privatizing major sectors of the economy without corruption), the only way to avoid a major catastrophe is to successfully claw back at least half of the $90 billion that was misappropriated.

Given the certainty of default either by missing a coupon payment, or failing to refinance expiring Euro Bonds, the better approach for Lebanon might be to default now, save the money that would be spent from now until the certain default from paying the coupons on existing debt and save that money to keep the government’s ability to pay government employees including the armed forces as long as possible.

Corona and the Truth Don’t Mix in Egypt