In a small tent in Tahrir Square, in the heart of Baghdad, a small group of protesters have recreated a "Mini Iraq”, with their national, rather than sectarian or ethnic identities; They represent a cross-section of identities – constructing a model of the country they dream of living in.

The members of this small nation call themselves the "Team of the Provinces", as they all originate from outside Baghdad. They have one fundamental mission: working to combat the tear gas they face day and night.

The members told Raseef22 that they met and grouped by coincidence, they did not know one another beforehand. 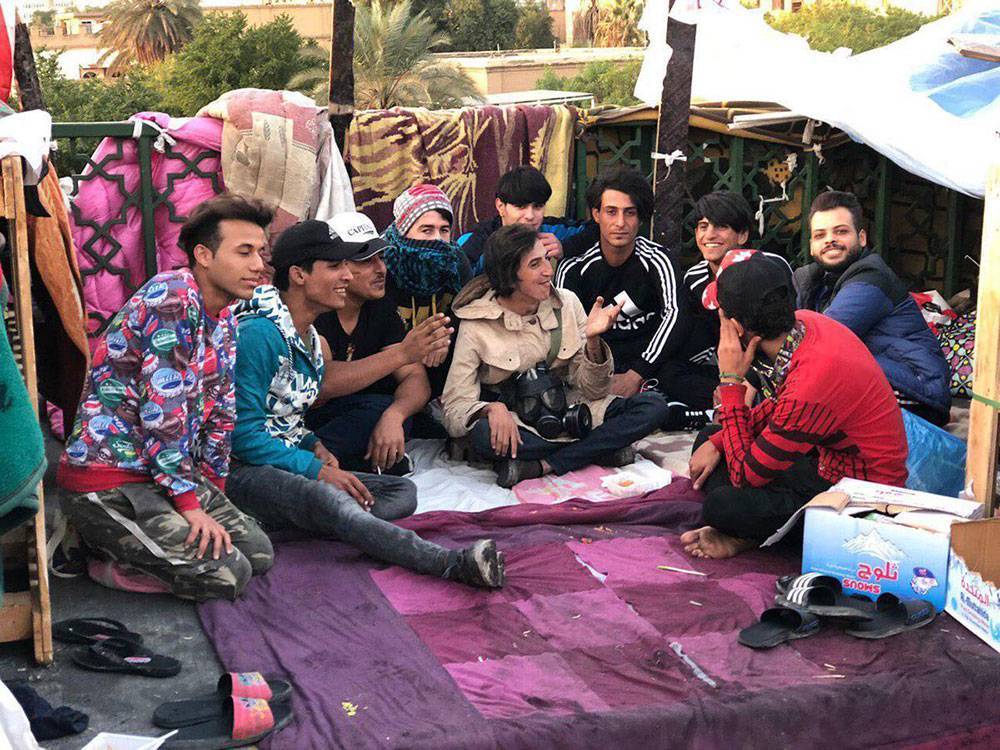 It was amidst the backdrop of bullets, stun grenades and tear gas canisters in the Khulani Square near Tahrir Square, the icon of the Iraqi protests, and at a barrier of the security forces, which were attempting to forcefully disperse the protesters, in a climate more resembling of a war than a peaceful protest, that the first meeting of the members took place, as they collectively took cover behind a concrete barricade from the bullets of Iraqi security forces.

A bucket, some water, gloves and a makeshift shield made from a sheet of metal are the primitive tools used by the members of the team to combat the tear gas canisters #Iraq’s riot police fires against #IraqProtests

18-year old Ibrahim from Basra, shows us the bruises on his body, saying he was "subjected to severe #torture during his detention along with twenty other young men near a concrete barrier close to Tahrir Square". #IraqiProtests

20-year old Miqdad arrived from the province of Irbil in the Kurdistan Regional Government (KRG) to participate in the Baghdad protests. He tells Raseef22: "Me, Haydar, the Joker, Alawi and Murtada all decided to set up a team called the "team of the provinces" during our first meeting in Khulani Square, with the mission of combating tear gas bombs."

Miqdad adds that many other protesters later joined them, "from the central, southern and northern provinces."

Meanwhile 19-year old Bilal, 'the joker' as the protesters like to call him, tells Raseef22: "The team started with five people who randomly; the idea came from several individuals, and we were joined by another number of protesters taking the number to ten, from various provinces, offering aid to protesters and providing for their needs."

The members of the team placed conditions which needed to be fulfilled by aspiring recruits, including being quick and light-footed, having strong endurance, being patient and able to tolerate being alone and away from their families, and being able to take responsibility for themselves. 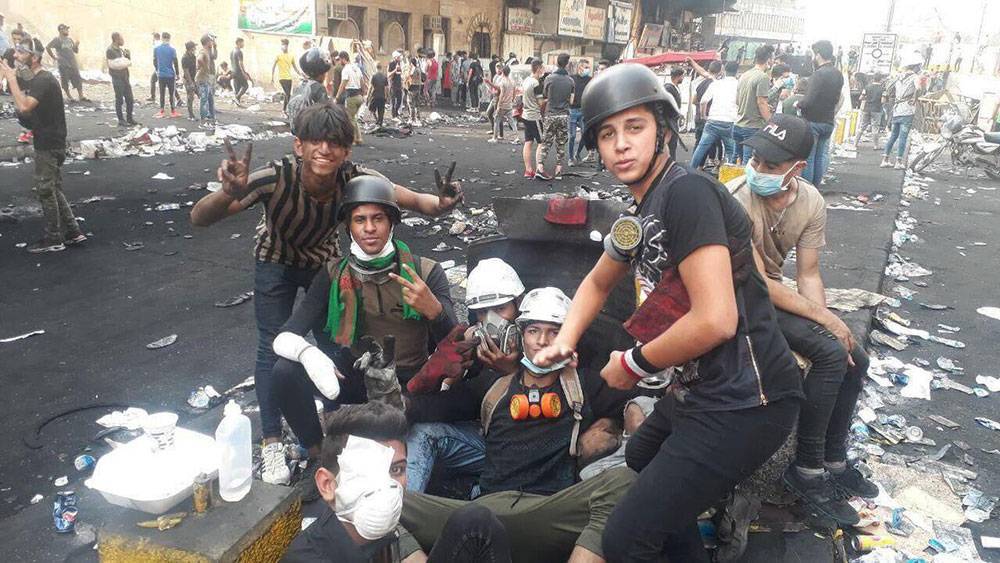 A bucket, some water, gloves and a makeshift shield made from a sheet of metal are the primitive tools used by the members of the team to combat the tear gas canisters which riot police fire against Iraqi protesters. They race to put out the tear gas canisters, before placing it in a bucket of water to extinguish it. This is how the group has been working for the past two months.

The members of the team say that they have captured dozens of tear gas canisters since the start of their participation in the protests, putting them on display in an exhibition in Tahrir Square, which also hosted clothes, helmets, the remains of bullet casings and Iraqi flags stained with the blood of protesters. 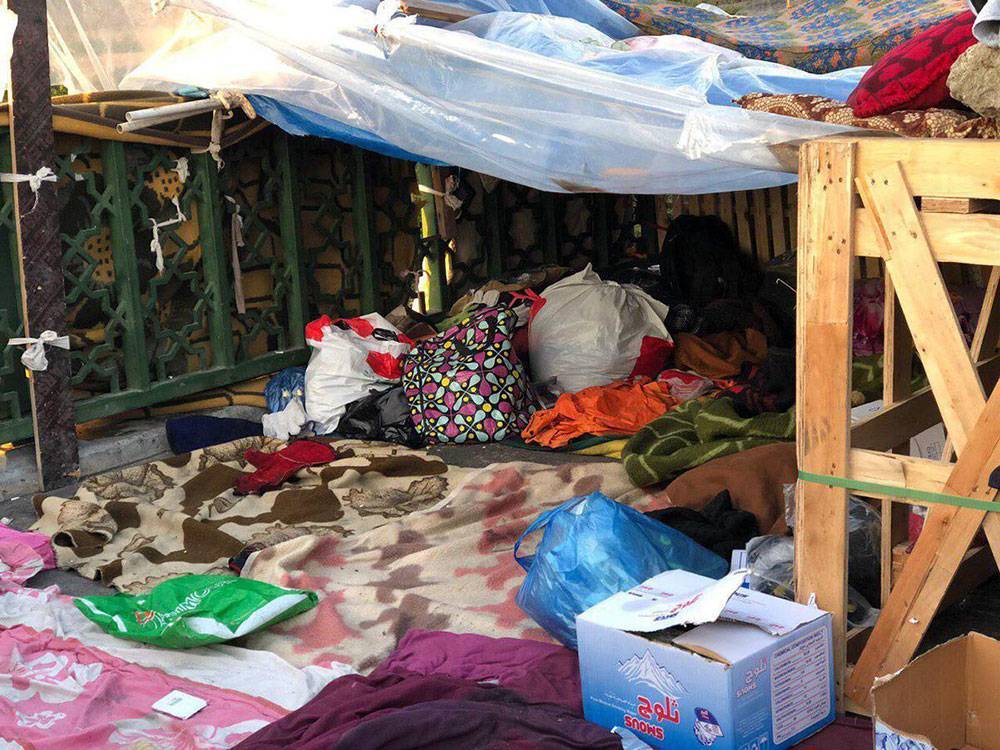 The onset of winter and the downpour of heavy rains flooded the team's tents, forcing them to sit outside of them after their clothes and blankets became drowned in water.

Away from their cities and families, the protesters and the "team of the provinces" experience different types of suffering, as a result of the negligence of the political elites towards their demands – but this didn't stop them from holding a sit-in in Tahrir Square. The protesters say that they will not go back home until the ruling political class is removed.

Mustafa, 19 years of age, has been at the sit-in for a month, languishing in the pain of being away from his family. He came to Baghdad from the southernmost province of Basra, Iraq's economic capital, to participate in the popular protests, despite the fact that his own city has also witnessed widespread protests and has become known locally as the "capital of protesters", due to the number of protests it witnesses.

Mustafa affirms to Raseef22 his rejection of all forms of violence and vandalism in the popular protests, stressing the importance of keeping it non-violent and conveying the voice of the protesters to the world until the legitimate demands which they have been calling for since more than two months are achieved.

Meanwhile 18-year old Ibrahim from Basra, shows us the bruises on his body, saying he was "subjected to severe torture during his detention along with other young men near a concrete barrier close to Tahrir Square."

Ibrahim confirms that he had been "subject to brutal beatings and threats" by the security personnel who arrested him. Despite this, he insists that he will not retreat from his demands until they are achieved – in his words, "even if it costs me my life." 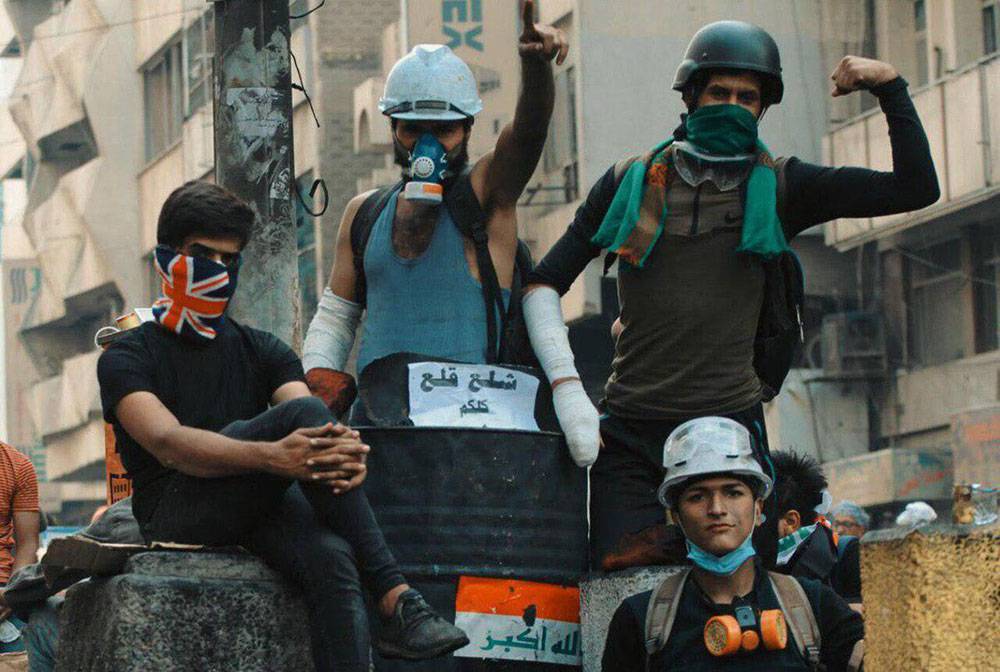 The popular protest movement has created many different forms of solidarity and mutual support amongst Iraqis. In Tahrir Square for example, interdependence, cooperation and coexistence serve as the main factors for the continuation of the protests and their sustained momentum.

The protests have also had social ramifications. In the protest squares, it is forbidden for any protester to speak of sect or doctrinal beliefs; furthermore, there is no room for class distinctions amongst the protesters, with everyone coexisting regardless of their many different sects and religious affiliations, and with 'tok-tok' (auto rickshaw) drivers and workers sitting with doctors and engineers.

The protests have also exhibited Iraqis' love of life, and their tenacious attempts to cling onto a decent living. Furthermore, the skills and talents of the youth in various different arts have been on display, notably in the decoration of the streets of Baghdad, in addition to the emergence of their evident and substantial ability to change their dire circumstances – to the extent that the older generations have become ashamed when viewing this new passionate and fighting generation, with participants ranging between fifteen to twenty-five years of age.

This new youthful Iraqi generation can be described as one that does not believe in the same things that the political elites do, and have broken all red-lines and opposed the use of religion for political purposes.

In sarcastic terms, the "team of the provinces" thanked the Iraqi government, because it was the reason for the establishment of their collective and their participation in the spontaneous popular protest movement.

The members of the team say that they will not grow apart or break up no matter what happens to them, and will not leave the squares of protest until the current ruling parties are deposed through their non-violent movement.

‘We will not withdraw’: inside the Turkish-Iranian struggle for Iraq’s Nineveh plains after ISIS

The termination of Syria’s Grand Mufti position: Has Assad opened the door to secularism?