Millions simply adored President Gamal Abdel Nasser and hung his image in rooms around the Arab world, but many aspects of his intriguing life are still unknown, of which the role food played in shaping his relationship with his family, the Egyptian people and the world.

Were dinner tables a tool through which Nasser promoted his policies? What factors shaped the leader's relationship with food, and how did he employ them to endorse his agenda?

"I own nothing" said Nasser, with these words he summed up the image he wanted to paint of himself in the minds of his contemporaries, according to Mohamed Jaber, professor of history at the Faculty of Arts at Ain Shams, a specialist on the Nasser era interviewed by Raseef22.

Jaber points out that Nasser grew up in a middle-class family as his father was a modest postal worker. At the time of the July Revolution, Nasser was a lieutenant colonel and since officers pay was quite low, this determined the food he ate and his lifestyle in general.

Jaber explained how Nasser's revolt against the monarchy and against the landowners set him apart from the bourgeoisie that made up the political class before the July Revolution. He succeeded in creating this image by inviting world leaders to dine at his humble house in Manshiet al-Bakri and through serving simple food.

"Nasser did not adorn himself or wear a mask. What he did was to preserve his way of life before he became president, and ensured he retained that image with the people, capturing their respect and love” Jaber says.

The Professor thinks that the nature of Nasser's allies at that time made it imperative for him to pursue that way of life, they were either leaders who revolted against capitalism such as Nehru in India and Tito in Yugoslavia, or socialist leaders of poor African countries such as Ethiopia, Guinea and Sudan, all from socialist countries.

Nasser converted his food habits to a political matter. Unlike the pomp of the Kings before him, Nasser showed off simple foods made from basic staples just like the average Egyptian in a popularity contest.

Gamal Abdel Nasser’s brother talks with Raseef22 on his brother food habits, how he captured the hearts of Egyptians with simple meals, away from the gluttony and pomp the Kings of Egypt were so well known for.

"He presented himself as the son of the people," explains al-Azhar University Professor of modern history, Abdel-Moneim al-Juma'i, describing Nasser's home and humble food as tools to refine his image to the world, aligned with the poor, labour and villagers.

Al-Jumai'i added that Nasser used many other tools along food and clothing, such as his political speeches. He was a great orator and had a special charisma and he knew how to exploit the political circumstances around him.

"He was from my town and was just like us" It is not just an ordinary person who said this about Nasser, but someone who was accustomed to seeing presidents and kings in their grandest form. This was Ali Atef who was the son of the Presidential chef Ali Mohamed who was tasked with preparing food for the Presidential banquets for world leaders. 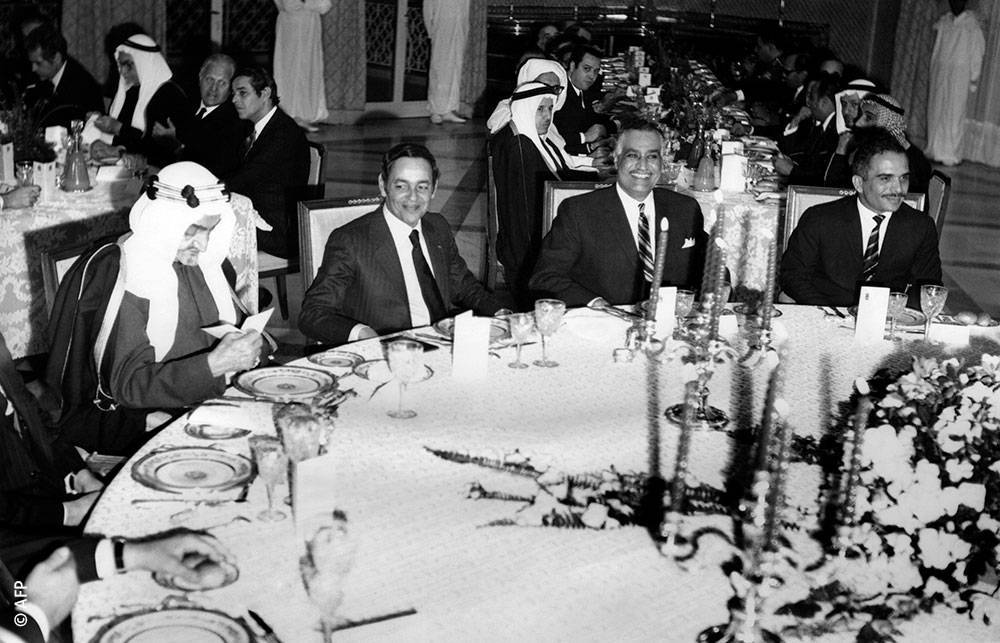 The son of the famous chef says that Nasser was known for his unique way of receiving his visitors, which differed from the way King Farouk entertained which was luxurious and extravagant but also different from the way Sadat entertained. His father had catered for all three. 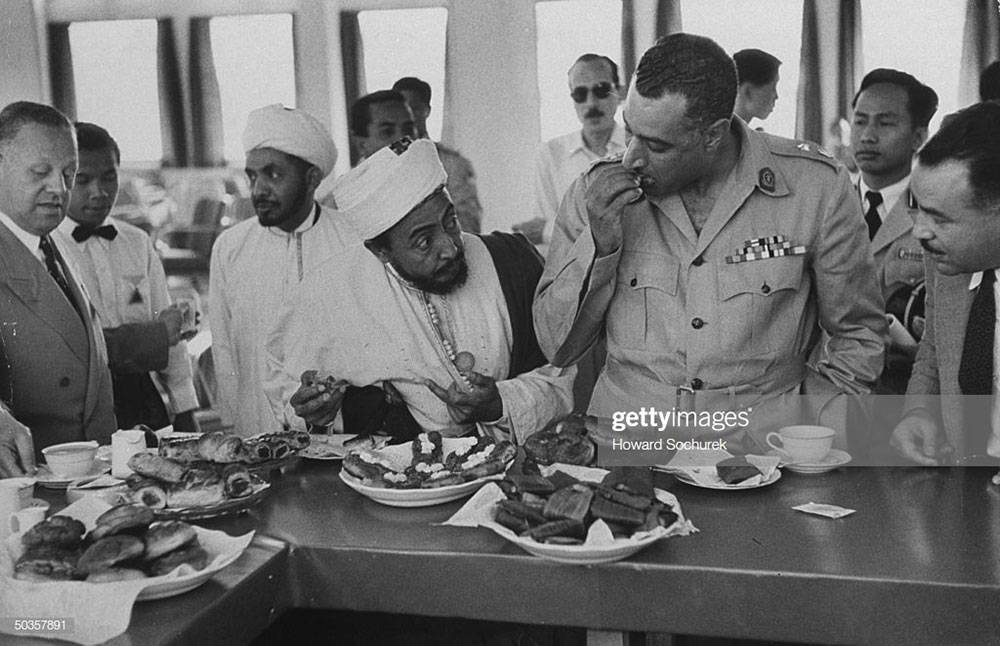 Ali tells Raseef22 that Nasser did not want to eat with the presidents at the palace or on the Mahrousa (the presidential yacht), but rather at the presidential getaway in Gholeem which was, in fact, Nasser's apartment itself which was modest and furnished with simple furniture. He lists the visitors to the leader in Gholeem at the time, Libyan President Muammar Gaddafi, Sudanese President Jaafar Nimeiri, the Emir of Kuwait Sabah Al-Salem Al-Sabah, King Hussein of Jordan, and Emperor Haile Selassie, pointing out that Nasser was keen to present homely and unflashy meals free of ostentation.

The only exception to this rule was when he hosted Yugoslav President Joseph Tito, who was received by Nasser on the presidential yacht, but the exception regarding locale did not translate into an exception regarding the meal as Tito's meal did not differ from other leaders meals, Ali said.

Ali touches on the menu that Nasser favoured and served to his guests, including basic dishes, especially ones from Upper Egypt such as Wika Sa’idi (dried large okra) stuffed potatoes & zucchini dolma, molokhia (mallow stew) and red peppers cooked in the oven with olive oil, He also asked for sea-fish such as grouper, which was then available at low prices, shrimp or crab that he liked to eat boiled. 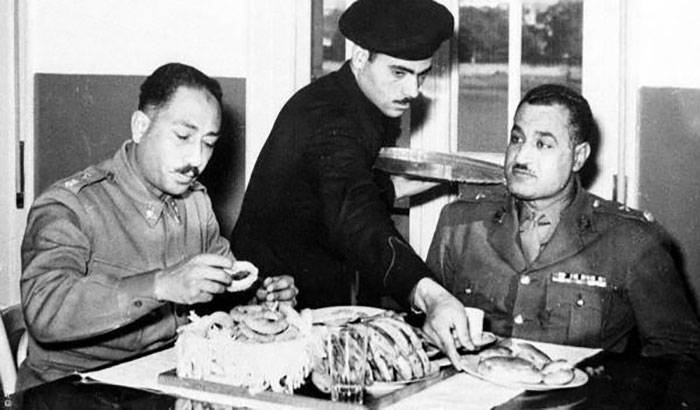 Nasser's cook's son explains that the simple cuisine, as well as the modest furniture, left an impression on his guests, especially the Emir of Kuwait, who visited Egypt more than once, and then wrote a check for the president for $10 million and sent him a private plane. But Nasser gave both to the state even though it was a personal gift according to the chef's son and verified by Juma’i.

The Effect of Food on Egyptians

Food contributed not only to the image of Nasser before kings and presidents, but also to control the Egyptian public when Nasser banned the importation of some goods which could only be dispensed through co-operatives, and after the Naksa of 1967 (the loss of Sinai to Israel) when meat was sold three days a week only.

"Nasser banned the importation of unnecessary goods. Imports required payment in dollars, and the state could no longer afford that, causing prices to rise," said Assem El-Desoki, Professor of modern history at Cairo University.

Desouki tells Raseef22 that society’s structure before the revolution paved the way for these decrees, Egypt heavily relied on imports, the affluent classes were heavy consumers of imported goods, that Egypt could no longer afford.”

This is how food became a direct means of communication between Nasser and the Egyptians. On one occasion, a migrant worker (those working outside their villages and areas) threw at Nasser a handkerchief with an onion, a loaf of bread and a letter of complaint saying “my salary can only get me these for food”, Nasser then increased workers salaries from two and a half piasters to 25 piasters. 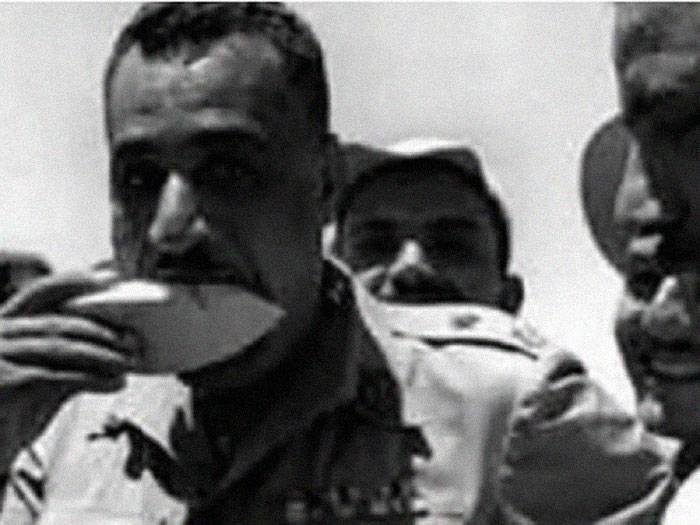 Nasser adopted land reform laws that doubled the peasants' wealth, he limited the importation of “conspicuous” goods like refrigerators from big international brands and canned goods that were not part of the diet of the ordinary citizen. 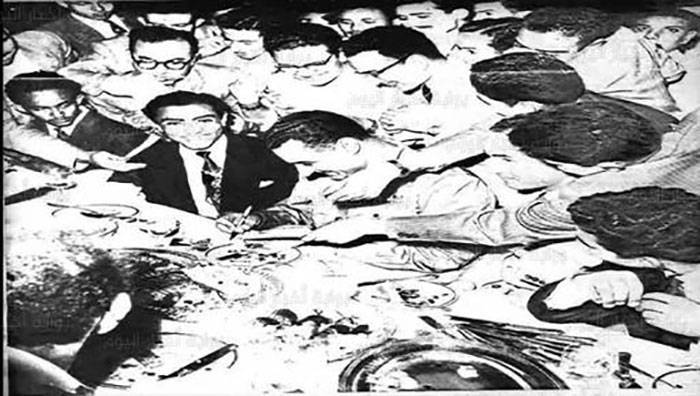 Jaber explains that Nasser's food policy promoted freedom of trade, protecting wholesalers and retailers, and introduced co-ops to provide basic goods for the ordinary citizen, during this time, Egypt achieved self-sufficiency when it came to vegetables and fruits and achieved an annual growth rate of 7.5%.

The president was not the only one responsible for his food choices, diabetes played an important factor in all this! In 1961, when Syria broke away from the United Arab Republics, Nasser was diagnosed with diabetes which obliged him to eat whole grain bread.

Nasser's brother Adel told Raseef22 that the President’s diabetes worsened after 1967 and doctors prevented him from smoking and climbing stairs and he began to use an elevator installed inside his home.

Adel explains how some of the people around the president did not attach any importance to his illness. One of the related anecdotes is that of Nasser 's assistant for political affairs, Mahmoud Fawzi, who entered Sadat’s office after he assumed the presidency, found the secretary offering the president, a heavily brewed tea which elicited the comment “do you want to kill me like you killed Nasser?” and he asked for a lighter tea. 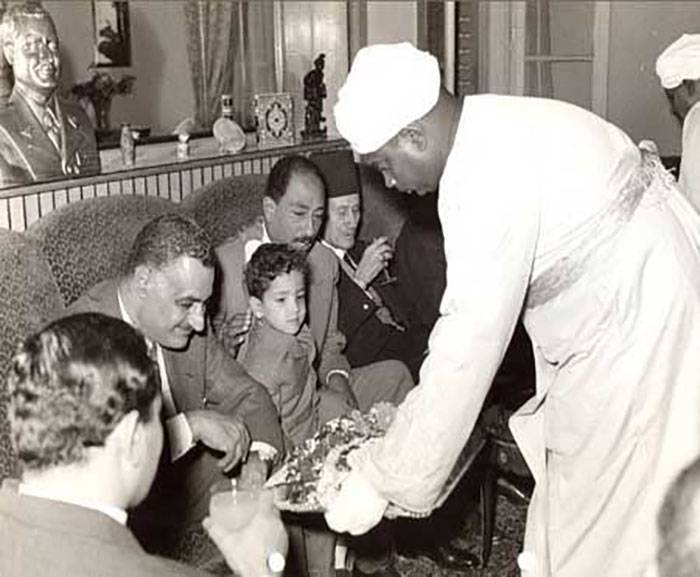 For his part, the son of the president's chef reveals another effect of diabetes on the meals of Nasser, pointing out that his father cooked the grouper in a certain way reduce fat while Nasser only ate veal because it has less fat than other types of meat.

Despite his illness, Nasser preferred the veal cooked with a little butter. He also consumed a great deal of fish and refrained from eating sweets, but he remained a heavy smoker despite the seriousness of his condition.

"He ate zucchini, okra, stuffed courgettes, meat and fish," Adel said, describing his brother's menu, noting that Nasser was particularly fond of fish because of his upbringing in Alexandria, and mallow stew was a staple dish. Adel tells how the president had two separate kitchens. One of the kitchens prepared meals for officials and guests, Nasser called it the "public sector", the other was a "private sector" for his personal meals with his family.

Food tells another story about Nasser's life: his nocturnal existence. The president worked for twenty hours a day and in the evening he listened to tapes he received from the State Information Service and he would only have sandwiches and coffee at night, his brother recalls.

Abdel Nasser would gather his parents, siblings and children every Friday at the President's getaway in the Mamoura district of Alexandria, where they spent the weekend with him, going out as a family and according to Adel the primary responsibility for preparing the food during those times would fall on Nasser’s wife. 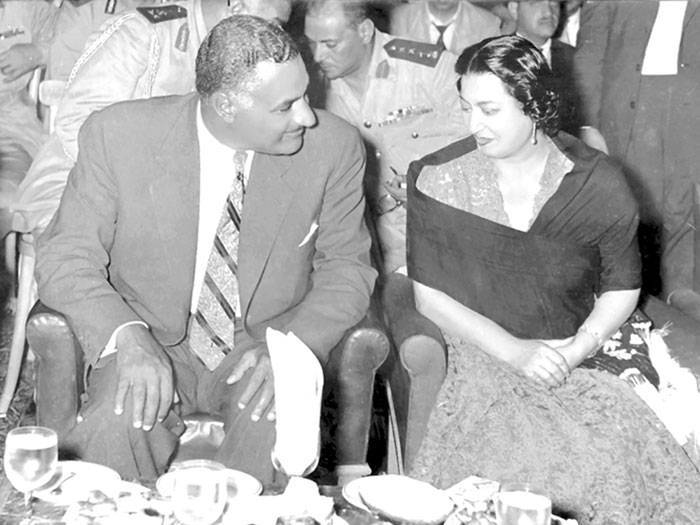 An exploration of Nasser’s dining table cannot end without mentioning the pickles that his chef would buy for him from a store in Al Azhar, whose owner was known as A’m Dukrum (Mister Cunning). The story begins with a visit to the store by a man named Barakat, who A’m Dukrum discovered was the president's chef and from that day his pickles became an essential part of Nasser's breakfast that Barakat would buy daily.

A’m Dukrum told Raseef22 that the late leader never had a specific request regarding the ”Torshi” but it had to be on the table regardless of whether he ate it or not. He would await Barakat’s reports and when was told ”The president is pleased with the Torshi” he would consider it a great reward and it was a major incentive for doing his job as best he could.

What would have happened to Rami Malek if he was still in Egypt?

Who am I? A transsexual’s journey in Egypt to answer the difficult question

Arabs in Concentration Camps: The Forgotten Victims of Nazi Germany