Last weekend, there was an explosion on social media facing us as activists and staffers at alQaws, intimidation and anger directed at non-gender-normative and sexual minorities in our society.

The situation began after some r well-known social media accounts shared ads from alQaws about an event held in the city of Nablus earlier this month, and another for an upcoming event.

This situation was further exacerbated when Palestinian police spokesman Louay Arzaiqat published a statement announcing a ban on the activities of the alQaws Foundation, threatening those in charge of it, and calling on citizens to report any connected persons. 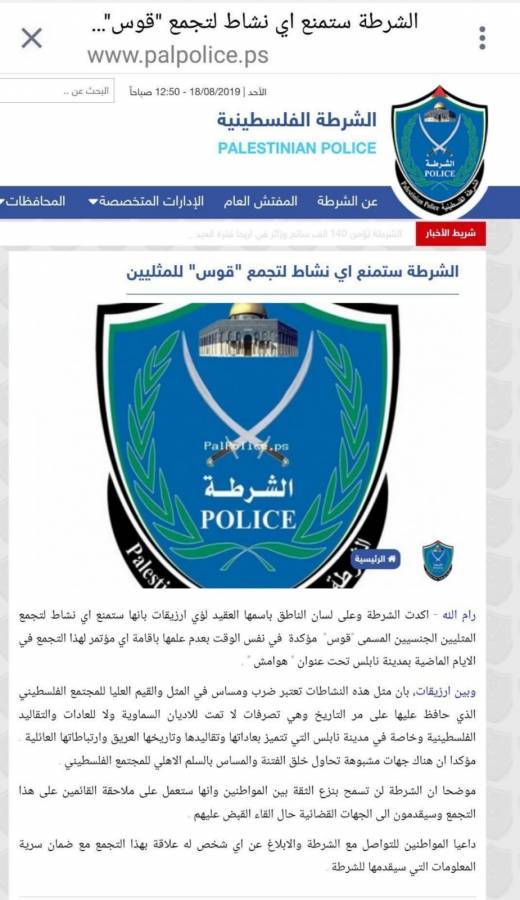 It was clear to us that the statement came to achieve a populist goal in deference to violent voices from some Palestinians, the end result is nothing further threats to the security of a subset of Palestinians.

Not a Priority for Palestinians

In alQaws we have tried to address the issue from different aspects through statements or publications we publish on social media, or interventions through different media platforms but our latest attempts to use the following sentences to shed a light on Palestinian media and its role in the issues of sexual and gender pluralism in general.

The central role played by media in any political or social issue, including issues of sexual and gender pluralism, is vital.

We at alQaws began breaking into media in a systemic way after a long process of working and thinking, including research we conducted in 2013 exploring the views of civil society about physical and sexual rights which recommended that alQaws communicate with media outlets for their influence and this is what led us to a field research in which we studied the attitudes and shifts of the Palestinian media towards the issues of sexual and gender pluralism, and formed a solid ground for us to understand the media structure in Palestine and its relationship with these issues.

Palestinian media found themselves facing serious questions, such as the exploitation of the Zionist colonizers of the issue of sexual and gender emancipation in the promotion of colonial policies: pinkwashing!

Palestinian police spokesman Louay Arzaiqat published a populist politically driven statement banning the LGBTQ activities of the alQaws Foundation, threatening those in charge, and calling on citizens to report any connected persons.

We released a press guide on how to cover issues of sexual and gender pluralism which was intended to serve as a reference for journalists when covering these issues, as it provides professional information and tools for journalists to deal with the issue.

Our publication of the guide was followed by many attempts to reach local Palestinian media platforms, despite many difficulties preventing us from achieving tangible and clear results, though we are sure that it has achieved and will achieve change in the long term, in a cumulative and gradual manner.

Reactions to alQaws Foundation and the calls to cover our activities or even any issues related to sexual and gender-based pluralism were divided. For some the total rejection of the subject and a refusal to cover it since these causes are “not a priority for Palestinian society” or are “alien & foreign to it” and is, of course, an extension of the dominant societal discourse about demonization of the other.

At best, if the media has a progressive or supportive approach, the lack of coverage is due to not wanting to "provoke sensitivities" or "cause a ruckus we can do without”.

The other approach was to address these issues and highlight them but through tabloids who only aim to increase the views or readings without any societal or political goal, solely confirming stereotypes and promoting hate speech through articles like "A Journalistic Investigation on Lesbians in Ramallah" or " Gay Palestinians Living in Tel Aviv", or working on a video report about the alQaws and t surprising us during the recording with questions like "How is your relationship with your family? Do your friends know about your preferences?". These are all actual examples of our experience working in the field.

Surely we can’t ignore some Palestinian press institutions, which have always had progressive and professional platforms which opened their doors to alQaws to express topics that need to be raised, but it is worth mentioning that these platforms can be counted on one hand and address a certain readership and do not have a wide reach like other outlets or broadcasters. 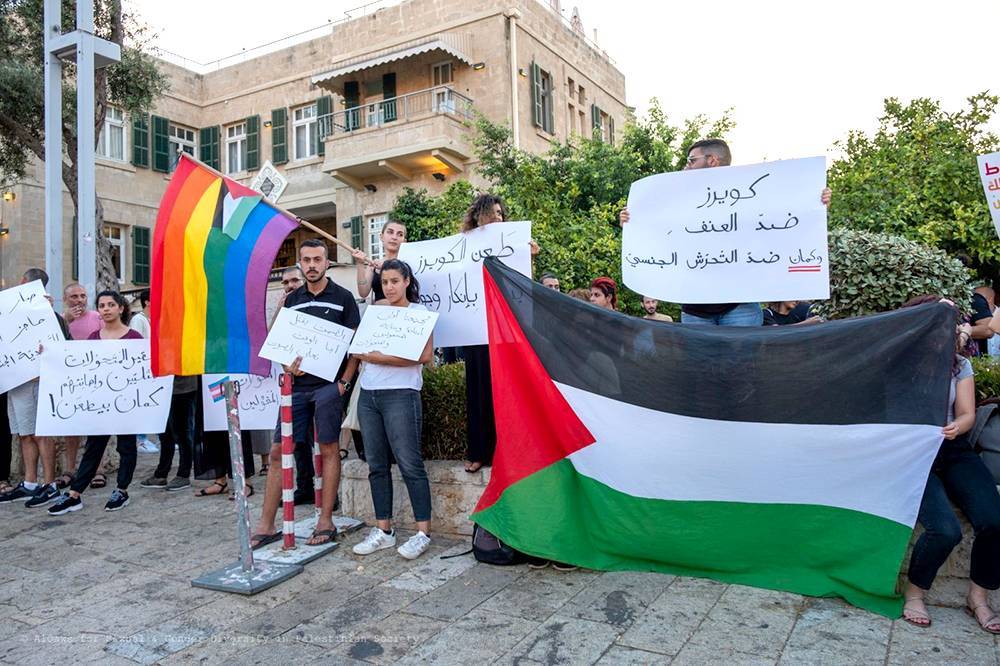 A Revolution in One Month

In this scene - which has been slowly changing with the efforts of alQaws and other forces of political and societal change, a massive change took place this August, a historic milestone that we will not forget as an institution or even as Palestinians and Arab feminist and Queer movements.

We began this month with a demonstration in Haifa, the first of its kind against violence against people living with different sexual and gender orientations, the demonstration was organized by alQaws in collaboration with other feminist and queer organizations after an incident where a Palestinian boy was stabbed because of his sexual orientation by his brother and this was followed by the Police statement and the events we described above

As a natural consequence of the two events, Palestinians from all over began to pay attention to the case and debate flared up to turn the issues of sexual and gender pluralism into an issue of public opinion not only limited to organizations like alQaws that fight day and night to expand the conversation about these issues which no longer just concern “Lesbians and Gays” in a limited way but are now a central issue for Palestinians to tackle.

Media is born from and is influential in society, Palestinian media has faced the pressing question of how to deal with these issues. At alQaws we are watching this incredible unprecedented transformation, particularly in the last three days, as the vast majority of media platforms have covered events related to the institution and all the social controversy surrounding it.

Although coverage is still lacking in professionalism and objectivity at times, it was a clear signal to media and society that sexual and gender pluralism issues, which affect the whole society and are at the heart of other social and political issues, cannot be avoided.

On the other hand, many media dealt with the issue in the same sensationalist way that we have mentioned. Also, many media outlets did not ask themselves to read our statement or visit our website, which kept them - and us - stuck in a cycle of social myths.

From Marginal to Community Debate

Palestinian media found themselves facing serious questions, such as the exploitation of the Zionist colonizers of the issue of sexual and gender emancipation in the promotion of colonial policies, this harms society as a result of the legitimacy earned by the violence against people living with different sexual orientations and different gender identities , and other questions that we must raise to build a stronger society.

This is precisely what we at alQaws are trying to work on, whether through our media discourse, our training or our political work, which is to transform the issues of sexual and gender pluralism from marginal issues to issues for social discussion, in a responsible and constructive manner to achieve change and Palestinian media to pay more attention to what is marginalized and absent in our society.

I am not trying to paint an excessively rosy picture of the impact of the recent events since there has been a replication of past media discourse. But there is no doubt that this week's incident will fade and be forgotten, but it is very clear that this month was a paradigm shift in how Palestinian media deals with the subject whether deliberately or due to circumstances.