LGBTQ people in northern Syria endure various social, religious and legal constraints forcing them to hide their orientation. This denial results in psychological and social problems that are not confined to them alone but extends to others, especially when forced into heterosexual marriages.

Much has happened in Idlib province over the past years with the ongoing war and conflicts between many factions, living there has become stressful for everyone. Add to that the difficulties of being homosexual and having to cope with the pressure to fit in and  avoid scandal. The governorate has become "a large prison with small cells and many jailers," as one person described it.

In Idlib, we interviewed several gay men were confirmed that their sexuality has become more of a danger after the revolution, Islamic factions have imposed strict laws, to the extent of sentencing to death those confirmed of having homosexual relations and those suspected are subject to torture and imprisonment.

"Everyone here is wearing masks," Mohamed said meaning that it was not limited to Islamic factions who literally cover their faces.

Muhammad (not his real name) is a young man in his early 20s of stocky build seemed more worn than when we met in Idlib late last year.  Muhammad talked in detail about what he insists on calling "his sickness” and that nothing could assuage his confusion and anxiety about his condition.

The young man lives in a village around the town of Salqin, a few kilometres from the city centre but he goes into town from time to time to see his friends and to experience a little freedom with others from the LGBT communit, pursuing his desires secretly out of fear from the wider society that surrounds them. 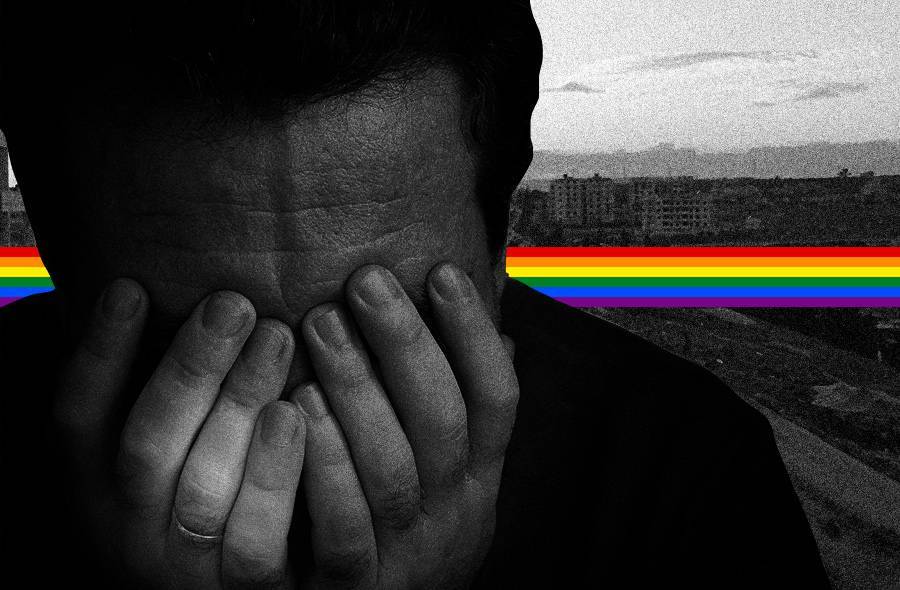 At our first meeting, he was visiting the city for a different reason. He had just arrived in Idlib to look for a doctor to treat what he described as his “sickness” which he couldn’t hide any longer from his family now that they forced him to marry.

He explained that all the attempts of treatment that he had tried previously did not succeed in distracting him from his sexual orientation, which continued to haunt him and is a constant concern for him. He said: "I tried to stay at home and then joined one of the fighting factions in an attempt to forget and preoccupy myself, but that did not work."

Muhammad prefers to explain away his orientation as “releasing a bad sexual urge that we should not legitimize or defend despite committing it”, describing his desire as "moments of pleasure far from real life".

It is worth noting that homosexuality is condemned by explicit provisions in Islamic law and the Syrian Penal Code, article 520 states that "any intercourse contrary to nature is punishable by imprisonment up to three years."

He explained how his mental condition began to deteriorate, avoiding returning home as a result of his sense of failure with his wife, who he was unable to sleep with despite months of marriage.

The city of Idlib has become a refuge for Mohammed to escape from his family and his 16-year-old wife who he married under family pressure and to feel close to his peers and friends.

Muhammad thought a lot about fleeing to Turkey, but could not get enough money. "I didn't tell my family and I don't know if my wife had told her family, but I tried my best to get treatment for my condition and I have already tried many natural and synthetic drugs," he said. "I couldn't get close to her despite months of marriage."  He refuses to discuss the nature of his orientation or the possibility of accepting it.

Muhammad prefers to explain away his orientation as “releasing a bad sexual urge that we should not legitimize or defend despite committing it”, describing his desire as "moments of pleasure far from real life", gay life is ”a passing mistake and not human nature and it can’t be a constant way of life"

This young man only knows a few words of gay jargon used in this region related to gender “Top”, “bottom” “versatile” while trying to justify his proclivities as being perhaps because of a need for the tenderness from a  father who was cruel with him at a young age or perhaps It is caused by a defect in his body or it may be a curse which is the result of a spell cast by someone envious of him.

Muhammad presents many justifications for his condition in an attempt to understand his tendencies, which he is ashamed of, expressing his fear of losing respect from people around him fearing the consequences of his actions that he sees as disobedient to God  and forbidden by religious teachings and social customs.

Wearing a distracted expression Muhammad remembers how he would wake up abruptly after having had sexual dreams about his male partners, which made him more isolated and introverted with his friends who prided themselves on their affairs with girls and would share their numbers and pictures.

Muhammad could not keep up with his peers despite his repeated attempts and fabricating fictional stories with girls from the neighbourhood. These stories were not enough to stop his schoolmates from bullying him because of his effeminate gestures and the way he spoke.

Despite the bitter cold in December, Muhammad continued to walk down al-Mutanabbi Street in Idlib to the clock roundabout, which is the centre of the city. He tried to escape his thoughts and worries before deciding to visit some of his gay friends living in the city.

Recalling his old memories, Muhammad says: "Here I keep the most beautiful memories of my early college days and here I felt my heart beating for the first time when I saw a blond young man with blue eyes looking towards me ... I did not try at the time to understand the truth of those feelings or find the appropriate description, but over time, I was feeling emotionally and sexually inclined to men, and that terrified me.”

In a highly conservative society, homosexuals find it difficult to understand or inquire about their orientation and just deal with it as naturally as they can, so they have mixed feelings that lead them to self-hatred, rejecting reality and wrestling with guilt, even putting themselves or their partners at risk out of fear and anxiety and even longing for death to purify themselves and experience salvation.

This was confirmed by Saleh (a pseudonym). He is a young man in his early 30s. Saleh had met Muhammad through a gay dating site, becoming one of his few friends in the city.

At that time he did not mind receiving us at his humble home in Idlib and sharing his story, and he seemed more stable in his social life. He is married and has children living in a house away from the city center.

At the time, Saleh presented himself as a devout man in form and speech, he has a good reputation and good stature in his area because of his university degree, his work and his mingling with many people. He explained that the life of Arab homosexuals is different from others as they are forced to do a lot of things against their nature in order to maintain an image before society and to please their parents.

Although Saleh has studied and is knowledgeable about  homosexuality, he described the origins of his self discovery in his teens by saying, "I thought it was a temporary illness but it continued with me even after marriage."

``We are forced to take into account the societal norms in which we live, '' Saleh said, pointing out that unmarried people are more likely to be suspected than married people and they are often branded as “child molestors” but can maintain their masculine social image provided they keep their homosexual relationships secret and acting manly in public.

Saleh said a man can establish gay relations provided that they are secret. He himself has met with many married gay men looking for secret gay relationships while preserving their public image, other than that he refuses completely to discuss transsexuality or declaring sexual orientation openly.

Not far away, in another neighbuorhood of the city,lived another friend of Muhammad named Khaled.

Khaled (a pseudonym), 33,  was a little quiet and reticent during our meeting. He scolded Muhammad for being "a child, reckless and talking freely to strangers,".

Khaled chose not to marry and is still "steadfast" in the face of the pressure exerted on him by his family and friends to marry, citing poor financial conditions and instability, without knowing how long these arguments will remain useful.

On the other hand, Khaled stressed that "this matter (sexual orientation) is not a matter of pride, and must be kept secret because it harms society and harms individuals. Homosexuals have the ability to remain celibate and single as an option to avoid being sinful and indulging in sexual practises that may cause a lot of psychological and physical diseases”

"Abstinence from sexual acts may help to cure this disease," he said adding that he didn’t approve of the idea of marriage to those not attracted to women   "because it is unfair to the wife and husband and will end in a scandal, and bring many problems and possibly marital infidelity."

"In the end, this is an affliction from God, where our patience and faith are tested why should innocent women have to share our misfortune," said Khalid. He said that gatherings of gays are limited and are usually limited to the secret meetings of partners emphasizing that there was no possibility before or after the revolution for gays to gather in a public place.

It is worth noting that homosexuality is condemned by explicit provisions in Islamic law and the Syrian Penal Code, article 520 states that "any intercourse contrary to nature is punishable by imprisonment up to three years."