It may be the case that Sudan’s ongoing protests fail to topple the country’s 75-year old President Omar al-Bashir – an event which would undoubtedly constitute a major shock for those demanding change in the impoverished North-African country. However, what should be equally borne in mind, is that the continuous effects of the Sudanese uprising may not be any less important than a scenario which entails the actual overthrow of the president.

More than three months ago, Sudan’s uprising against the thirty-year rule of Omar al-Bashir began – sparked by a demonstration on December 19, 2018 by the residents of Atbara in the north of country protesting the scarcity of bread. Atbara was soon joined by the rest of Sudan’s cities in a rejection of the country’s economic conditions: including rising inflation, increases in the costs of basic commodities and services, the collapse of the national currency and a crisis of monetary liquidity.

While the protest movement initially began as a limited set of economic demands, the slogans of the protesters quickly escalated into political expressions calling for the downfall of the regime – holding it responsible for the economic crisis and Sudan’s other many problems. 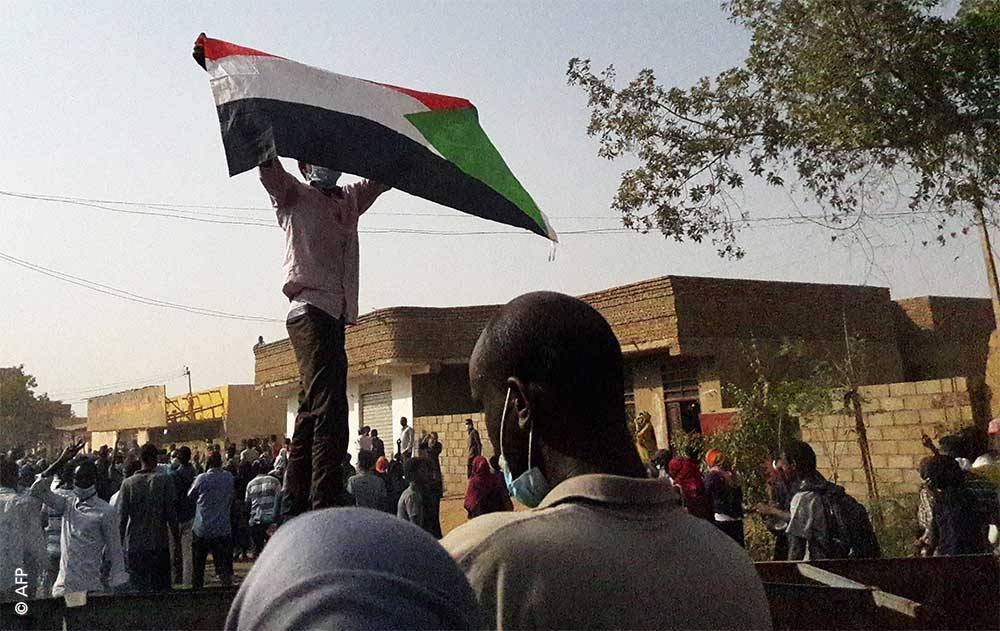 Meanwhile, the role of one union, the Sudanese Professionals’ Association (SPA), has particularly stood out during the protests – succeeding not only in mobilising the street, but in leading the train demanding political change in the country.

Breaking the barrier of fear

When they began their latest struggle for change, the memory of the events of September 2013 was strongly present at the forefront of Sudanese minds. Then, and in a matter of a few days, Sudanese forces killed up to 200 protesters with live ammunition, according to human rights monitors (government statistics put the number of dead protesters at 80) – shocking Sudanese citizens in how the ‘Islamic-oriented’ regime dealt with peaceful citizens. Meanwhile, since the beginning of the current round of protests, 32 civilians have been estimated killed since December 2018, according to the Sudanese Interior Ministry, whereas Amnesty International puts the number at more than 51 dead.

Yet the protests continue. So, what changed between September 2013 and December 2018? We asked this question to lawyer and activist Muhammed al-Mukhtar, who simply answers that the machinery of repression entailing death, detention and torture effective in 2013 ceased to be so five years later – notably pointing to the protesters’ defiance of the emergency law imposed by the government since February 22. Indeed, al-Mukhtar notes that many of those arrested and sentenced to months’ imprisonment have refused to be released for a fine or on bail, in order to make sure that the regime does not benefit from such measures.

Al-Mukhtar says in an interview with Raseef22: “Above all that, emergency courts have become sites for the prosecution of the regime itself, and to display the bravery of the protesters who often chant for the nation and for freedom, sometimes in front of the judges themselves.”

The generation of change

What has been particularly noticeable in the current Sudanese revolution is that the generation which has never known any other ruler than al-Bashir, has been the same one to take up the reigns of change.

What has been particularly noticeable in the current Sudanese revolution is that the generation which has never known any other ruler than al-Bashir, has been the same one to take up the reigns of change.

In particular, al-Mukhtar says that youth under 30 have displayed a rare courage in the face of the security machinery. Indeed, despite the fact that these protests were for many the first they ever attended, Al-Mukhtar says the youth have nevertheless “displayed a mastery in the hit-and-run game with soldiers, and showed a fighting spirit demonstrated by their resilience even if the price was a bullet to the heart.”

He adds that “among the evidence of this was when the martyr Abdul Azim Abu Bakr stood in front of a convoy of military vehicles raising the victory sign with his hand, without caring that he would pay the price of his life for this heroic stance.”

Al-Mukhtar also brings attention to other iconic examples from the uprising, including the chanting of women detainees for freedom from inside a police station, the jostling of young men to protect their female counterparts from the authority’s iron fist, and an incident in which a protester was seen raising the Sudanese flag while being trampled underneath the boots of soldiers. These were only some of the “many vivid situations which would need many books to enumerate,” says al-Mukhtar.

“The woman’s voice is a revolution”: this phrase can aptly summarise what has been happening in Sudan since last December – for since the very start of the protests, Sudanese women have constituted the main factor in every successful revolutionary event.

“The woman’s voice is a revolution”: this phrase can aptly summarise what has been happening in Sudan since last December – for since the very start of the protests, Sudanese women have constituted the main factor in every successful revolutionary event.

Indeed, observers of any protest march will find young Sudanese women participating alongside men in every form of revolutionary activity, receiving their undiminished share of torture, repression and arrest.

“The scale of appreciation that women found in this revolution was one of the reasons their participation in it grew day after day,” feminist activist Safiya al-Jilli told Raseef22.

Al-Jilli also notes that the Sudanese Professionals’ Association (SPA) has strived to ensure that women are remembered in all of its events, and has consistently placed them on an equal footing with men in its speeches and calls. Furthermore, the SPA has designated specific marches for women, al-Jilli says – while ululations have become the codeword summoning the entry of male residents into the protests, once women demonstrators announce their entry into an area with their distinctive high-pitched cry.

Inspired by the same call of the 2011 Arab Spring, another slogan raised by Sudan’s protesters has been “peaceful, peaceful” – present in demonstrations and scrawled on banners, subsisting even through the darkest hours. Wiser voices have prevailed in response, asserting that nothing defeats the regime more than nonviolence – both as a slogan and a reality.

A further striking protest slogan that has reflected the values and substance of the Sudanese revolution is the rhyming cry: “O arrogant racist, all the country is Darfur” (“ya onsori wa maghroor, kol al-balad Darfur”). This refers to a concerted campaign by the regime to blame the death of protesters on the residents of troubled Darfur – the site of mass killing, atrocities and displacement since 2003 – with the revolutionaries’ slogan hurling the attempt back in the face of the regime. Sudan’s security chief Salah Abdullah Gosh had previously declared the arrest of a cell allegedly affiliated with the Darfurian Sudan Revolutionary Front (SRF) under the leadership of Abdul Wahid al-Nur, which he claimed was planning to carry out terrorist operations targeting the revolutionaries in order to blame the government.

Moving onto the field of Sudan’s political parties, how have the protests affected the political opposition? The vice-president of the “Reform Movement” (Islah) and Islamist leader Hassan Rizq told Raseef22: “The street movement led to the opposition acting to unify its ranks, and to unify the many initiatives [proposed] to fulfil the aspirations of the people – even if by mutual consent according to the minimum common boundaries, towards establishing a transitional government which can work towards removing a government of a party in favour of a state for a nation.”

Rizq notes that many leaders of Islah – most notably Ghazi Salah al-Din and Fadl-Allah Ahmad – had previously defected from the ruling National Congress party following the protests of September 2013. The two leaders would subsequently go on to formulate the parameters of a new party in a text that would become known as the “Memorandum of the 31”. According to Rizq, the governing party had decided to expel the two leaders after they objected to the use of violence against protesters, while also criticising the government’s economic policy and the absence of freedom in Sudan.

Yet the benefits of the protest movement have not only been confined to the opposition, says a leader in the ruling National Congress, but has also extended to include the government.

Dr Rabie Abdul-Ati lists a number of ways his party has benefited from the protests, saying that his party had “started to feel [identify] the areas of defect inside it, and is currently working on fixing it at the required pace.”

“We don’t have too many options in front of us, either to reform or to fall,” he told Raseef22.

It should be noted that President Bashir had previously suspended discussions around proposed constitutional amendments which would allow him to run for a new presidential term in 2020. He further dissolved the government of former Prime Minister Motazz Moussa after less than six months in office, in a further attempt to absorb the rising popular anger.

The gains of the Sudanese revolution are ultimately many, and certainly cannot be confined to the aforementioned points. Yet, nonetheless, while Abdul Ati summarises those gains as “reform,” Hassan Rizq as “unity of the opposition” and Safiya Al-Jilli in “women’s empowerment,” it is perhaps Muhammed al-Mukhtar’s choice of word which encapsulates all of the above most adequately: “Consciousness.”

Why are Sudan’s student protesters so brave?

Islam and Jail: the Prophet Used Wives' Houses and Mosques as Prison Facilities