As a little girl, A.M. would wait until she was far enough away from home before she would take off the veil her mother forced her to wear. A Sahrawi girl raised in the tribal traditions of her family and forebears, her mother saw her covering as a crucial sign of her honor. But one day, as she strolled home, she felt a blow strike the back of her head. Her mother had followed her to school, waited until she left, and snuck up on her daughter. “I looked back and I saw her,” she told me. “When we got home she beat me hard and shoved and pulled my hair, it was unbearable. There are other accidents of violence but this one I recall vividly.” Violence against women is common in the Western Sahara, a region in North Africa that is partially controlled by the self-proclaimed Sahrawi Arab Democratic Republic and partially Moroccan-occupied, bordered by Morocco proper to the north, Algeria to the northeast, Mauritania to the east and south, and the Atlantic Ocean to the west. The major ethnic group of the Western Sahara is the Sahrawis, a nomadic or Bedouin ethnic group speaking the Hassānīya dialect of Arabic, which is also spoken in much of Mauritania. They are of mixed Arab-Berber descent, but claim descent from the Beni Hassan, an Arab tribe that migrated across the desert in the 11th century. Many of the society’s values and beliefs are similar to those of the rest of the Middle East and North Africa, particularly when it comes to women, sexuality and gender. The Western Sahara has gained a reputation as one of the freer societies in the region when it comes to women’s rights and freedoms, but Sahrawi society does oppress and limit women’s advancement, an ailment that spans the entire Arab world. Women here face the same obstacles as women around the region. Their rights and freedoms are dictated by their families and tribes – from how they treat their bodies, to what they wear, to how they act, to what they believe. Before urbanization, and due to the nature of our nomadic society, tribes lived as packs in different areas while moving constantly, following either their herds or the rain. This presents unique challenges when it comes to women’s role and how they are treated, with differences between tribes and regions of the Western Sahara. But the standard rules that both males and females followed were rules that gave more freedoms to men because of their roles as hunters, protectors and leaders, while limiting women’s roles to biological ones, such as giving birth and raising children, as well as domestic responsibilities like housework. In our society, women’s choices are neglected and crushed in the name of “honor”, “shame” and “scandal”. Those choices can span the simple ones, like wearing perfumes, to human needs and instincts like having dreams and ambitions, relationships, and thinking for ourselves. In the Saharawi refugee camps and the free zones of Western Sahara, there are no laws concerning marriages, including those of minors, as well as rape and domestic violence. In the Morocco-occupied areas, all these issues are solved and discussed within the family and tribe.

In this article I wanted to discuss the forms and definitions of gender-based violence in Saharawi society. What does gender-based violence mean? What are its forms? And how well-structured is it in Saharawi society? According to Article 1 of the General Assembly Declaration on the Elimination of Violence against Women, the term "violence against women" means any act of gender-based violence that results in, or is likely to result in, physical, sexual or psychological harm or suffering to women, including threats of such acts, coercion or arbitrary deprivation of liberty, whether occurring in public or in private life. And according to Article 2 of the same declaration, gender-based violence includes, but is not limited to, physical, sexual and psychological violence occurring in the family, including battering, sexual abuse of female children in the household, dowry-related violence, marital rape, female genital mutilation and other traditional practices harmful to women, non-spousal violence and violence related to exploitation. In addition, the term gender-based violence refers to "any acts or threats of acts intended to hurt or make women suffer physically, sexually or psychologically, and which affect women because they are women or affect women disproportionately." There are many forms of such violence in the Middle East as well as North, West and Central Africa, including child marriages, female genital mutilation, marital rape, and sexual harassment. In all of the Middle East and North Africa, the nature of the patriarchal society gives the right to control and monitor women to the males of the family. It’s about the ownership of the female body and the female mind. 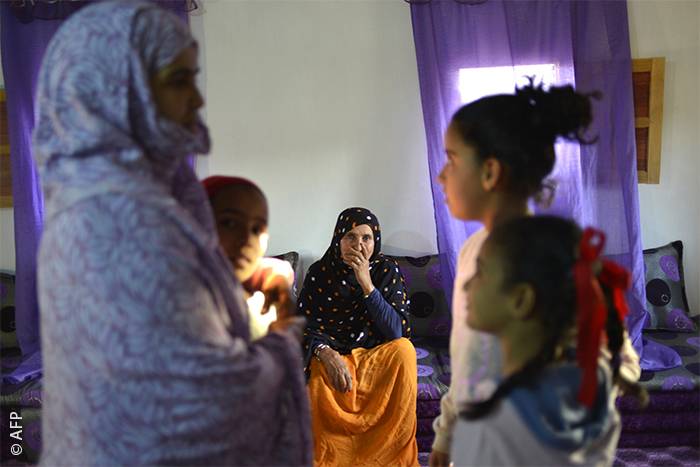 Sahrawi society is a patriarchal, tribal, religious society built on a culture full of male centralization and on the strong belief that women are inferior to men, with inevitable gender roles for women: to give birth and to raise children. The obstacles we face when we try to study gender-based violence are unlimited. Due to the nature of our society and the fear of shame and scandals, victims of violence rarely speak up or report to the authorities. Which makes it harder to have precise information and statistics on violence in all its forms. We can detect symbolic violence in the discrimination against females in their upbringing, in the judicial system, in the lack of political female representation, in economic rights, in the social status of women, to the views about women in culture and religious heritage, and the image fabricated about us in media. And most importantly in the unfair tribal system that controls us. The most complex form of patriarchy that enforces the subordination of women. I spoke above about the rarity of female testimonies about violence, with tribal laws playing a big role in the silencing of victims. In the case of rape for example, the tribes of the victim and the rapist will announce a meeting that solves the case without reporting to the authorities. The solving or the Tribal Reconciliation, called  “Amsegri” which means reconciliation or the demand of forgiveness or “Serba,” which is a tribal “Cheikhs” pack that visit the victim’s family as an act of enforcing the family to accept their apology without reaching to the authorities. The reconciliation is often between two choices, either an arranged marriage that forces the victim to marry her rapist, or the rapist’s family will offer money to the victim’s family. Tribal reconciliations stand as a wall between the victims of violence and their right of justice. It’s an unfair system built on constraining and oppressing women, and silencing them with endless excuses and shaming. Our society is built on the normalization of domestic violence. It’s legalized and agreed upon as a form of disciplining and educating. Even victims of violence don’t look at it as a crime or an abuse or an unfair treatment to them. It’s prohibited to talk about and surprising to people when we define violence as it truly is: a crime. This normalizing of violence puts everyone at risk, especially women. It enhances their acceptance of it and enforces the silence that surrounds it. I have been trying to collect testimony from victims of violence I know, but only few had the courage to speak up.  O.B. recounted her experience with an abusive uncle: “I remember this time when I was really young at my grandmother’s house and she was telling funny stories and I was laughing along and out of nowhere my uncle yelled at me to lower my voice, for women who are loud lack morals.” She continued: “I said I wouldn’t and he kept yelling so I took my keys and started to leave. I dropped my keys and bent to lift them when suddenly I get hit on my nose, my uncle used his knuckles and broke my nose and left me bleeding with my grandmother screaming for help. He abused me multiple times and still until now interferes in my life and threatens me from time to time.” One of the girls I went with to high school lived with her mother’s family, as she was an orphan raised by her grandmother. Her uncles were all controlling and abusive. Once, we were on the way home with one of our male classmates and we encountered her uncle, who glared at us and shoved her all the way to their home. I didn’t see or hear from her until a week later when she got back to class with fading bruises on her legs and forearms. The incident showed me the fragility of our basic human rights. Violence against women is a manifestation of historically unequal power relations between men and women, which have led to domination over and discrimination against women by men and to the prevention of the full advancement of women. Violence against women is one of the crucial social mechanisms by which women are forced into a subordinate position compared with men. We ought  to dismantle all the patriarchal constructions and to focus on issues that are well hidden behind the veil of taboos. And to highlight the unequal social beliefs forcibly fed to women and the harsh oppressive environments they live in, around the globe.