“They wanted to rape me. They felt my body up, and they touched my most intimate body parts, all the while calling me ‘son of a whore’.”

With these words, 15-year-old minor Said Chetouane yelled out in tears as soon as he left a police station in Algiers.

When he was arrested at the end of a popular demonstration, he had not imagined that his thin body would turn into a political game, in which each side sought to settle their accounts with others at the expense of his violated body.

The story of Chetouane is telling of the political power struggles that know no mercy in Algeria.

Allegations of Rape of a Minor by Police

In early April, Mohamed Tadjadit, better known as “the poet of Hirak” (or the movement’s poet), appeared in a video hugging a young man in a state of hysteria and accusing the police of raping him during his arrest.

In the video, Tadjadit called on citizens to revolt against the ruling regime, in outrage at the rape of men.

Within hours after the video was first broadcasted, the clip had spread like wildfire on social media, triggering a wave of angry reactions, the echo of which went beyond the borders of Algeria.

The wave of anger didn’t stay confined to the pages of social media for long, for it soon moved to the streets. The protesters of the movement quickly took to the streets, raising banners denouncing the suppression and brutality of security forces in dealing with the boy. A group of lawyers and media figures also entered the narrative, calling on the Public Prosecution to act and open an immediate investigation into the circumstances of the case, in order to uncover the truth and inform the public opinion of the details of the incident. They indicated that what happened to young Chetouane is a full-fledged crime, the perpetrators of which must be punished. 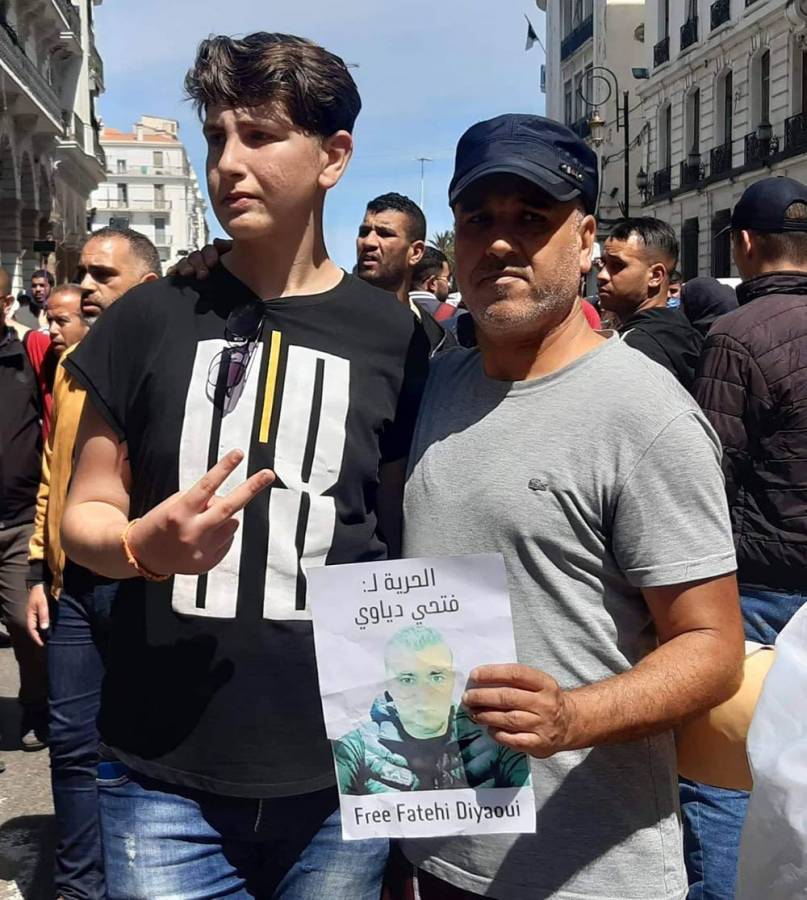 Sex: Present in the Police Stations

The story of young Said Chetouane’s sexual assault is reminiscent to similar stories that had occurred in the recent past and that were brought back to the surface by social media activists.

“They wanted to rape me. They felt my body up, and touched my most intimate parts, all the while calling me ‘son of a whore’”... With these words, 15-year-old minor Said Chetouane yelled out in tears as soon as he left a police station in Algiers

Four activists from the National Association of the Algerian Youth Federation and the Democratic and Social Movement also complained through the press that they were stripped of their clothes during a body search/inspection at a police station in the city of Baraki. This took place following their arrest near the Central Grand Post office, where they had been preparing to organize a march as part of the popular movement demanding the departure of all traces of the former regime.

Despite the uproar raised by the incident, as well as the Western media reporting it, and the condemnation of international human rights and women’s organizations, it was completely ignored by authorities at the time. The Ministry of Interior did not even issue any statement or reaction regarding the matter.

The story of the young boy’s assault started out from a criminal, rights-based standpoint related to accusations of indecent assault on a minor by security personnel. Politics soon dominated the scene, however, after Sayed Ahmed Murad, Attorney General of the Algerian Judiciary Council, cleared the police officers of said crime. He revealed in a press conference he had held that the child denied having been subjected to any sexual assault and that the forensic medical report confirmed that he had not been subjected to any abuse.

Soon the tables were turned as the plaintiffs turned into the accused, after the Public Prosecutor declared that investigations indicate that the boy’s friends — Mohamed Tadjadit, Suhaib, Walid Riahi, Dabaghi Tariq, Khaymut, and Sadiq Luwael — were in an intimate relationship with the minor. Thus, they became the defendants in the case.

Although there was no conclusive evidence of these accusations, the investigating judge at the Sidi M’hamed court ordered that they be placed in temporary detention in El Harrach prison.

The opposing Rachad movement wasn’t absent from the scene for long. Its stance was made known through the statements of its leader Mohamed Larbi Zitout, who used the case as a doorway to launch a direct attack on the regime and the Attorney General Sayed Ahmed Murad, accusing the latter of corruption. He stated, “The mob (referring to state authorities) violates and rapes childhood through the statement of the Public Prosecutor, who fabricated the facts of the case and overlooked what’s essential in the rape of the minor Said Chetouane.”

Zitout denied any connection between his organization and how the issue of the minor escalated and blew up internationally, pointing out that the regime is terrified of this issue after it had reverberated throughout international human rights organizations. He says the regime is seeking to mislead the Algerian public opinion so that it could cover up what he describes as the ‘filth’ being carried out by its security services.

For its part, the state launched an attack against the Rachad movement through its judicial system, indicating that it is using destructive propaganda schemes to defame and discredit the regime and the nation.

Tebboune Steps up the Tone

Immediately after the occurrence of this incident, which preoccupied public opinion inside and outside Algeria, Algerian President Abdel Majid Tebboune held a regular meeting of the Supreme Security Council. The meeting was devoted to assessing the general situation of the country on both the political and security levels, as well as studying what he described as acts of incitement and dangerous deviations by illegal movements with close references to terrorism.

Tebboune stressed that the state will not tolerate such deviations that have nothing to do with democracy, and that it will put an end to these unprecedented transgressions against state institutions and symbols.

Unfortunately, the case of minor Said Chetouane revealed that Algerian justice is determined by security services. So instead of investigating the allegations, the security services accused the young men in the video of plotting against the national interest”

A Call to Stop the Demonstrations

Those loyal to the authorities oppose the survival of the movement in the street and take advantage of the incident of young Said Chetouane to demand an end to the demonstrations. According to them, the protests have become a threat to the security and safety of the national unity of Algeria. Political analyst Samir Ben Ghwalah tells Raseef22, “I think that these people are resorting to appeal towards the sympathy of the Algerian people in order to gain solidarity with their factional movement, and at the same time to incite international human rights bodies against the Algerian police as an institution. They do this to weaken it as a whole and provoke its leaders in order to drag them into chaos. They allege sexual assault on a young minor at the hands of security officers, all for the internationalization of the movement as a human rights cause.”

Ben Ghwalah adds, “The coming days will witness a change in the way that the police deal with demonstrations by bringing down the law on the heads of these activists who are promoting lies meant to distort the image of security institutions internationally.”

A Test for Algerian Justice

Supporters of the movement believe that the case of the minor Said Chetouane puts Algerian justice in front of a new test. Opposition journalist and member of the Algerian Human Rights Defense League for Detainees (LADDH) Mohamed Iwanogan, tells Raseef22, “Unfortunately, the case of the minor Said Chetouane revealed that Algerian justice is subject to the authority of the security services. So instead of investigating and looking into what the minor spoke of, the security services brought in the young men who were with him in the video and accused them of plotting and conspiring against the country. Unfortunately, justice only went along with the developments as they took place and was not active or influenced them.”

Between activists who took advantage of the story to gain the sympathy of public opinion, an authority that found it an opportunity to strike and disperse the movement, and an Islamic opposition movement that saw nothing but an opportunity to expose the regime internationally — between all these remains the body of the boy Said Chetouane and his violated virtue, only seen as a cheap tool that everyone sought to utilize and exploit politically.

Surviving Rape at the Age of Eleven