In the still largely tribal Middle East, you cannot make the acquaintance of someone new without being asked the mundane yet crucial questions: “What is your family name, from which city you hail, and which neighborhood to be precise?”. Your interlocutor often relentlessly and deliberately tries to scrutinize your social class, political views, religion, sect, and race to then place you diligently in a mental box and kick-off the dubious process of manufacturing prejudice and stereotypes about your persona. What if I tell you that everything you assume knowing about yourself and community is sheer socio-cultural construct and that most of your precious archaic classifications can get easily shattered by irrefutable genetic research.

Tribalism, as an anthropological discipline and not a pejorative label, is defined as a kinship-based human structure oriented around the valances of analogy, genealogy, and mythology. It does not matter if it is real or fiction, as long as you can recite your patriarchal lineage by heart and proudly praise the deeds of your presumably glorious forefathers. This applies to different populaces inhabiting the region, including Kurds, Amazighs, Nubians, Assyrians, but particularly Jews and Arabs.

Suffice it to mention the Torah’s obsession with transcribing pedigree that goes 5781 years back and an entire Arabic poetry genre dedicated to chanting the praises of families and tribes called Al Fakhr. Maybe Arabs are one of the few groups that would still forge a family tree nowadays to prove their saintly descent from prophet Mohamed’s Sayed lineage or a certain highly regarded family for a few hundred dollars in countries like Iraq, Morocco, or Egypt. Unfortunately for most, modern genetic studies provide a completely different map about where the inhabitants of the region came from beyond ethno-nationalistic stratification.

"Arabs" are one of the few groups that still forge a family tree to prove their descent from prophet Mohamed. Unfortunately for them, modern genetic studies provide a completely different mapping of where the region's inhabitants hail from

Are Iranians More Arab Than Egyptians?

A controversial study carried out between 2005 and 2017 by National Geographic’s Genographic project came as a shocker for most Egyptians. The analysis of nearly one million DNA samples concluded that modern day Egyptians are only 17% Arab, while their genetic make is predominantly North African with 68% and other minor percentages from Africa, Europe, and Asia. 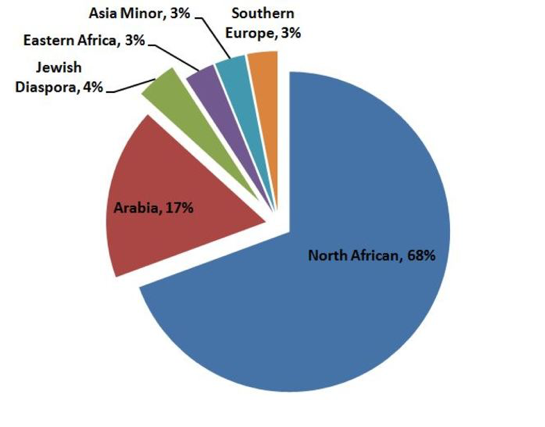 This becomes particularly startling if you contrast the Arab Republic of Egypt’s numbers with a seemingly Persian nationalistic country like Iran, which is 56% Arab, according to the same study. The National Geographic baffling data also classified Kuwait as the “most Arab” country among the studied set with an 84% Arab population, followed by Lebanon with 44%, while Tunisia was only 4% Arab.

The analysis of nearly one million DNA samples concluded that modern day Egyptians are only 17% Arab, Kuwaitis are the most "Arab" among the studied set with an 84% Arab population, followed by Lebanon with 44%, while Tunisia was only 4% Arab

Maybe the most controversial study to date was when researchers from Cambridge University and institutions in Germany, Poland and Australia claimed that modern day Egyptians are genetically unrelated to the Pharaohs. A complete genome sequence was obtained from mummies found in Abusir el-Meleq dated at between about 1,400BC and 400AD and prove that their genetic making was closer to Europeans and Near Easterners than to the present-day Egyptians. Evidently, this study along with tens of others continue to be viewed as “conspiracies by vicious foreign powers” against national interests if they do not conform with chauvinistic political discourses.

What If There Were No Jews?

If we leave systematic violence, apartheid policies, and the organized displacement perpetuated by the Zionist state aside, the Israeli-Palestinian conflict is reduced to a single question: Who was there first? Despite Israel’s best efforts to prove its people’s presence in Palestine for 4000 years, all archeological efforts continue to lead to a deadlock. Genetic studies however, suggest that Ashkenazi Jews originated from Canaanites who lived in Saudi Arabia hundreds of miles away from the terrain they claim.

Despite Israel’s best efforts to prove its people’s presence in Palestine for 4000 years, all archaeological efforts continue to lead to a deadlock. Genetic studies however, suggest that Ashkenazi Jews originated from Canaanites who hail from Saudi Arabia

More prominently, several studies carried in the past 20 years confirm that Arabs and Jews share some 70% of their genetic make. That might not only suggest a common ancestor but might more notably signify that there are no people called the Hebraics at all in history, and that they were one single tribe among hundreds of others scattered along the Arabian desert. This theory can be backed easily by the very marginal historical references to the sons of Jacob in Pharaonic and Babylonian scriptures, both heavily bureaucratic civilizations that documented every significant encounter with other people.

Similarly, it is largely accepted among the scientific community that the historical group referred to as the Philistines genetically resembles to ancient people who lived in what is now Greece, Italy and Spain and have settled in what we call Palestine only around 3,000 years ago, while the dominant genomes of present-day Palestinians is similar to Arab tribes that moved east of the Jordan river in later dates. However robust, this theory cannot be discussed openly in the region due to sentimental and political taboos and widespread treachery labeling.

Even the misinformed reader can differentiate between being an Arabized community from the 7th century onwards as a result of the Islamic Empire’s expansion and being of the Arab race. Of course, both are passionately intertwined in what we call today the Arab identity and continue to resist any alternative narratives. What commonly define Arabs genetically is the Y DNA haplogroup J-M267, also commonly known as haplogroup J1 and which existed in concentration across the Arab peninsula, Mesopotamia, and the Fertile Crescent some 36,000 Years Ago. Men carrying J1 genes domesticated animals and plants for millennia and have been among the communities that spread the Semitic languages. 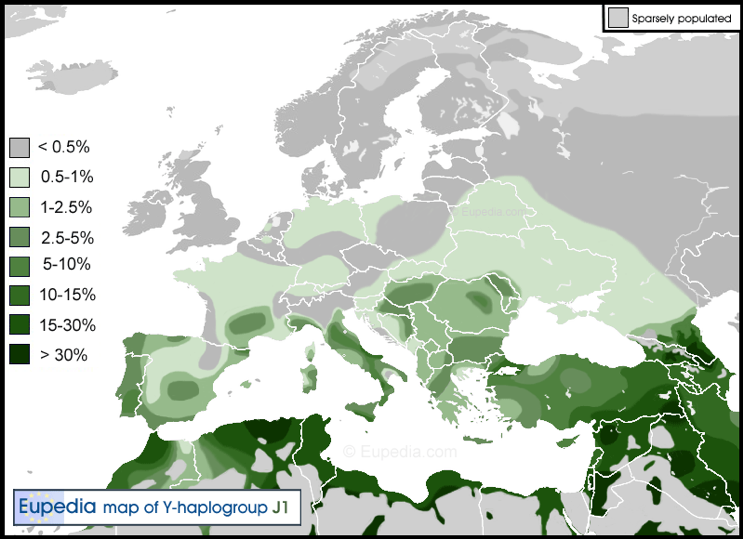 If Iraqis are not Sumerians, Egyptians are not Pharaohs, and people of Dagestan in the Russian and the Caucasus have more concentration of J1 DNA haplogroup than most of the League of Arab States’ countries, what does that make us today and how does it contribute to the incessant embarrassment of our modern day nation states?

I have undergone the genetic search exercise myself a couple of years back, and as I spit on the saliva collection tube that came with my kit, I wished I could equally spit on our brain-washed political elites that prefer investing billions in armament and wars to defend identity myths than to invest in genetic research that can reveal who we really are.